Could Canada Support Their Own Pro League? Blues Face Raptors on Saturday

It's something I've been thinking more of lately, what Canada could do to start their own Pro league instead of waiting for our neighbours to the south to dictate the where and when. The latest Ontario Blues press release prompted the article. The Blues have probably been the most consistent "professional-like" rugby organization in the country over the last few years. They were started in 2009 and one person whose name always shows up in a management capacity is Mark Winokur who probably can take a lot of the credit. They're the right team playing in the wrong league, the CRC, which is not the way forward for Canada. Their match vs Glendale Raptors could be a portent of things to come as the Raptors are one of the core teams of the new MLR (Major League Rugby) league proposing to start in 2018.

The thing that caught my eye in the Blues press release is they're treating the MLR as a fact even though it's a vision right now. The exact wording, "Saturday's rugby clash with professional side Glendale Raptors of Major League Rugby". The MLR isn't even an operational league yet but people are buying into the vision and that's what Canada is lacking... vision. Create the vision and then sell it. It's paying dividends for the MLR.

The Blues could fit right in I suspect, one problem is there aren't any teams in that eastern population hub that would be convenient for a Toronto area based team, at least in 2018. The Blues are playing this match at Sherwood Forest Park and I'm guessing that's not a professional level venue so that's another factor to consider. The Raptors have a nice 5,000 capacity stadium with top level live stream broadcasting capability. 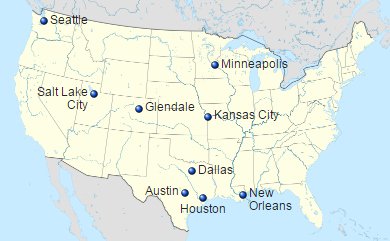 Proposed franchises for 2018 MLR
Let's move west for a bit to look at the options for BC. The minimum for a pro team is a viable stadium, the previous PRO Rugby guy, Doug Schoninger, had that right. Victoria could support a small market pro team, and these new leagues will be "small market" for a while until rugby grows in popularity. There are three stadiums Westhills, Centennial and Royal Athletic and the player pool with Rugby Canada centralized in Victoria is top level. The mainland area might be able to support two teams, there are a number of stadiums including Swangard in Burnaby and Rotary in Abbotsford. Calgary and Edmonton would be logical choices and Karl Fix in Regina wouldn't let something like this slide. That could be 6 possible teams and it's starting to look a lot like the western part of the defunct RCSL.

The difference this time around would be it's run from the bottom up instead of the top down. In the past Rugby Canada has said, "we need elite rugby, this is how it's going to work" and of course it hasn't. The MLR is building from the bottom up, groups of individuals believing they can grow a professional franchise, make money, grow rugby and finding like minded groups to form a league. It has to be that way to be sustainable. Are there groups of individuals in these Canadian cities who believe they can grow a professional franchise?

I hope to talk to Karl Fix at the Pacific Pride reunion this weekend and get his views. If there's one Canadian rugby person who typifies the entrepreneurial spirit needed to make it work, it would be Karl.

Ontario Blues Senior Men's Head Coach Chris Silverthorn has named his 23 man squad for Saturday's rugby clash with professional side Glendale Raptors of Major League Rugby. The match will be played in Burlington, Ontario at Sherwood Forest Park. Gates open at 1:00pm and kick-off is at 3:00pm.

“Its still early in our season, but the guys have now had a few games under their belt and the attitude at training has been excellent," said Silverthorn. "We know they are a pro team that is way ahead of us in preparation, but we feel we can look forward to a very even contest.”

Tickets for the match are available at the gate for $10/person. If you are planning on attending in a group of 25 or more, please contact info@rugbyontario.com by Friday May 19 to receive a discounted rate.

If you can't make it out to Burlington, catch the LIVE STREAM on our YouTube page.