It's been a long time since a public school won the top prize in boys high school XVs, 2008 to be exact, when Carson Graham defeated Shawnigan in the final. Shawnigan went on to win 8 of the 9 subsequent titles, St. George's won in 2014.

The dominance was so complete that some coaches started a movement to boycott Shawnigan, that was led by the top public school rugby programs Oak Bay, Carson Graham and Earl Marriott. I wrote an editorial on the simmering tensions back in 2010.

I'm glad the boycott petered out - the AAAA bracket was one of the long term outcomes. It's good to see the issue resolved on the field not in the political arena. Shawnigan has set the bar high this last decade, that's a good thing, Oak Bay proved that the advantage of the private school system can be surmounted with talent and hard work. That's a good lesson for everyone involved.

The final score was 24-13 in Oak Bay's favour. The full match is posted below for viewing.

In other divisions, the AAA final goes today between two strong rugby/football programs, South Delta and Robert Bateman, both schools feature strong cooperation between the rugby and football programs. The AA final is between Brentwood and Collingwood.

South Delta went on to win the AAA title and Collingwood the AA title.

Here are some links to catch up on all the scores and stories on the title wins.

Day 2 saw some surprises, #1 AAA Earl Marriott didn't live up to expectations as they lost to #4 Robert Bateman. It puts Robert Bateman in the final with #2 South Delta.

#2 Brentwood and #1 Collingwood advance to the AA final on Saturday.

The big match on Friday is the AAAA final between Oak Bay and Shawnigan, that will be live streamed at 5:30pm.

The live stream schedule calls for the Canada U20 game vs BC U23 to be live streamed at 7pm but earlier Canada U20 management had stated they wanted to keep the game under wraps so the the USA couldn't scout the game. We'll see if that still holds true come game day tomorrow.

Is this the year Shawnigan Lake stumbles and one of the public schools claim the title in BC? That question will be answered on Friday at 5:30 pm when Oak Bay takes on Shawnigan Lake for the AAAA title. Shawnigan defeated St. George's in a close 31-24 victory while Oak Bay put away Carson Graham 52-10.

In AA #1 Collingwood and #2 Brentwood are on track for a final confrontation. Collingwood defeating Clarence Fulton 55-25 while Brentwood pummeled Rockridge 79-5. Brentwood meet SMUS in the semis at 2pm while Collingwood face GW Graham at 4pm, both games live streamed.

In AAA Tier 2 action #1 Fleetwood Park and #2 WJ Mouat continue to the semis along with #4 Kelowna, #3 Handsworth were upset by #6 Elgin Park.

AA Tier 2 looks to favour some parity as the first two matches were decided by 4 points and 2 points respectively, LV Rogers and RA McMath coming out on top.

The Junior division final will be between Shawnigan and Earl Marriott.

There are 38 teams at the tournament vying for 6 titles.

There are 4 junior teams battling it out for provincial honours, Shawnigan Lake v SMU 9 am and Earl Marriot v Abbotsford 11 am.

These are the schedules for the four days. 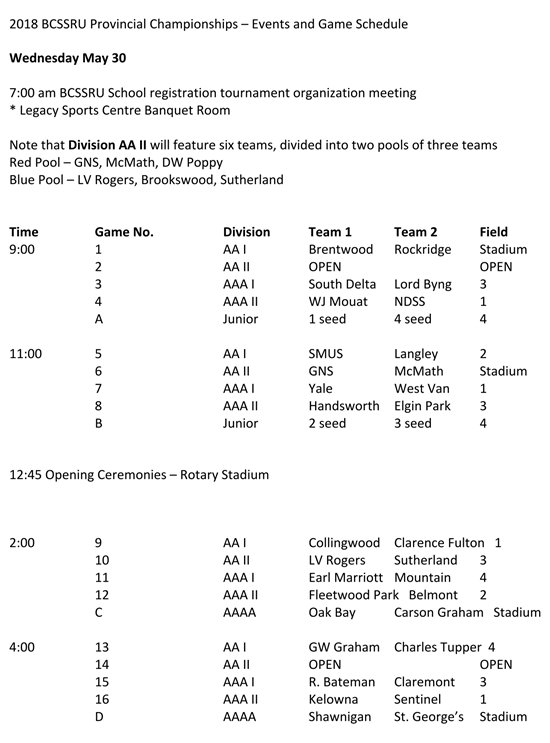 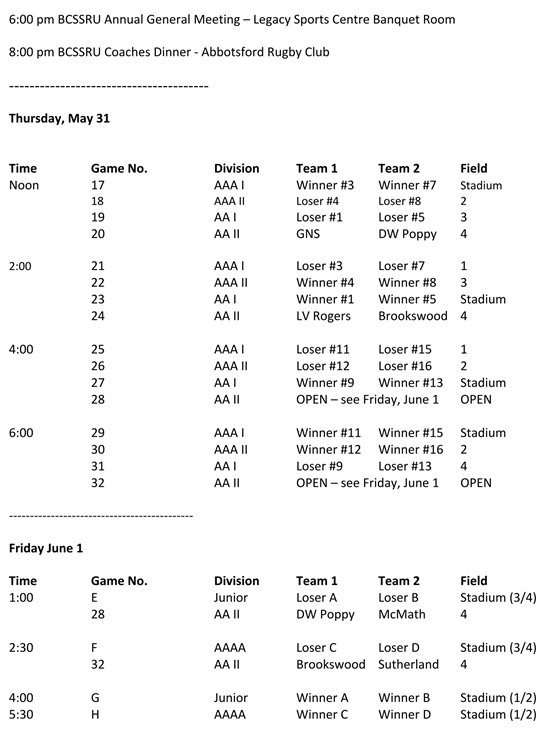 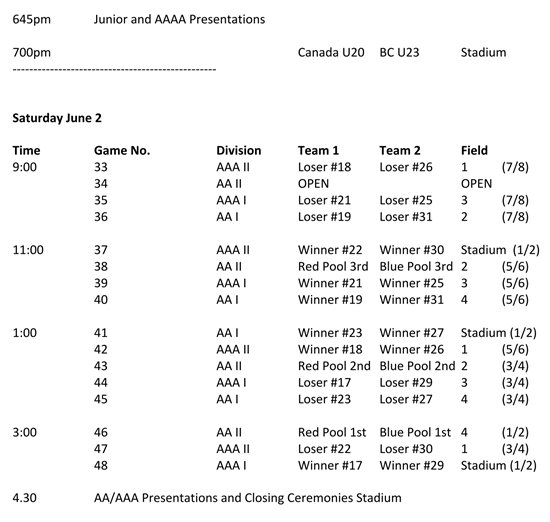