An exceptional three days of Age-Grade rugby culminated at Burnaby Lake yesterday. The BC Rugby Provincial Regional Championships, proudly sponsored by B2Gold, is one of the highlights of the rugby calendar and this year's event more than lived up to expectations. Regional teams from Vancouver Island to the Interior competed for glory in seven different divisions between over the Canada Day long weekend.

In total, over 900 players were in attendance over the three days, along with hundreds of supporters, dozens of coaching staff, match officials and organisers. Over 4000 minutes of competitive rugby were played, more than two and a half days of nonstop action if the games were run back to back. The enthusiasm from the athletes was palpable and they consistently delivered exciting end to end rugby action, much to the delight of onlookers.

BC Rugby would like to make a number of thanks to groups and individuals. To the match officials, coaching staff, parents, supporters, players and volunteers who all played their part in making the tournament such an enjoyable and successful affair. Also to Canadian National Men’s Team players Harry Jones, Admir Cejvanovic, Nathan Hirayama, Jake Thiel, Phil Berna and Andrew Coe for attending the event and inspiring the young athletes. Finally to our Sponsor B2Gold for their continued support of youth rugby in BC.

U14 Girls' Division
Having made its debut at the tournament last year, the U14 Girl’s competition has clearly struck a chord, as the division received double the number of entries from 2017 (8 up from 4). The enthusiasm from these young players is contagious and bodes well for the future of the female game. The bronze medal was contested by Fraser Valley West and Vancouver, with the valley girls coming out on top in a 31-5 final score. Come the gold medal match, it was another Fraser Valley team, East 1, who took to the field against Vancouver Island Tide White. The Island had claimed bronze in the 2017 PRCs U14 Girls’ category and were hoping to make it gold this year. In the end, they had to settle for silver as Fraser Valley claimed the top spot.

U14 & U15 Boys' Division
The U14 Boy's teams were not to be outdone though and put in some excellent performances. Fraser Valley East overcame a spirited Vancouver South team 22-10 to claim the bronze medal Vancouver North and Vancouver East, with no love lost between the two sides. Both teams showed youthful exuberance in bucket loads as the crowds cheered them on. Ultimately it was Vancouver North who claimed the top spot, edging the game by just 17-12. There were just two U15 Boys’ sides in the tournament this year, but they were more than happy to play a best of three series over the course of the event. The sides from Vancouver Island Tide and Thompson/Okanagan (TORA) both showed some excellent rugby skills over the three matches and while Tide claimed the series 3-0, TORA should be commended on their resilience.

U16 Boys Division
In the U16 Boys' division, it was Fraser Valley East who secured the bronze with an 18-15 victory over Vancouver North/West. Meanwhile the final was an echo of the U15 match, with Vancouver Island Tide once again facing TORA. Both sides had already met early on day 2 and TORA had come away the victors in that initial encounter. Tide were clearly out for revenge in the final and a fierce battle ensued. The final scoreline of 26-0 to Tide might appear one-sided, but anyone watching on the day will tell you that game was far from a walkover, TORA repeatedly threatening the Tide try line, only to face an impenetrable red wall. Credit to both teams on a thoroughly entertaining match.

U16 Girls' Division
What the U16 Girls’ tournament lacked in a climactic final (being run in a round robin format), it more than made up for in spectacle. With standings determined by head-to-head records, every game counted and the teams played with real intensity across the tournament. Vancouver South earned the bronze medal, a draw from day 1 helping to edge them ahead in the standings. At the top of the table, both North Vancouver Island Tsunami and Fraser Valley East were level, having won 5 games each. Having won their head-to-head match 19-10 at the start of day 3, Fraser Valley East were awarded the gold medal, Tsunami having to settle for silver.

U18 Girls' Division
As usual, the U18 Girls’ and Boys’ divisions drew some of the biggest crowds over the tournament, the matches showcasing some of the best young rugby talents in the Province. 2017’s winners TORA played some excellent rugby over the weekend but were only able to reach the bronze medal match, taking on Vancouver North/East/West. At the final whistle, it was the Vancouver side who came out on top, winning 27-12 to secure the bronze medal. In the final, Vancouver Island Tide took on Fraser Valley. The two sides had already met a day before in a fixture that Tide sealed in emphatic style, 38-0. Fraser Valley regrouped and were not prepared to go down without a fight and the second encounter between the teams was a much closer affair. Ultimately Tide came out on top but were pushed all the way by a resilient Valley team, the final score standing at 17-12.

U18 Boys' Division
If the U18 Girls’ matches were close, the Boys’ teams were about to show they could go one step better. In the bronze medal match, Fraser Valley East took on Vancouver West, a repeat of one of the last matches played on day 1. In that encounter, the Valley team had controlled proceedings and secured a comfortable 19-7 victory. This match, on the other hand, was a much closer affair with both sides locked in a fierce tit-for-tat battle. In the end, just two points separated the teams and it was Vancouver West to emerged the victors of this clash. The U18 Boy’s final was every bit as thrilling, with Vancouver North taking on Vancouver Island Tide. Again these teams had been able to size each other up earlier in the tournament, Tide winning their initial match 17-12. The two sides were wonderfully well matched, both showing tenacity and tactical play in equal measure. The gathered crowds were treated to a heart-pounding match that seemed so finely balanced, few could call the outcome with certainty. When the final whistle blew, it was Vancouver North cheering ecstatically, edging the encounter 18-15 to become the U18 Boys’ Champions for 2018. Credit to both teams for such a thrilling encounter.

The tournament wraps up on Monday.

PRCs Start Saturday - Five Regions Compete in U14, U16, U18 Divisions, Boys and Girls: Day 1 Schedule

The PRCs take place every year after the school year closes down. Five regions take part with some regions putting in several teams per division. The regions are Vancouver Island, North Vancouver Island, Thompson Okanagan, Fraser Valley and Vancouver. The event is being held at the Burnaby Lake Rugby Club.

Live streaming will be provided from Field 2 on every day, the live stream is at http://www.bcrugby.com/live/ 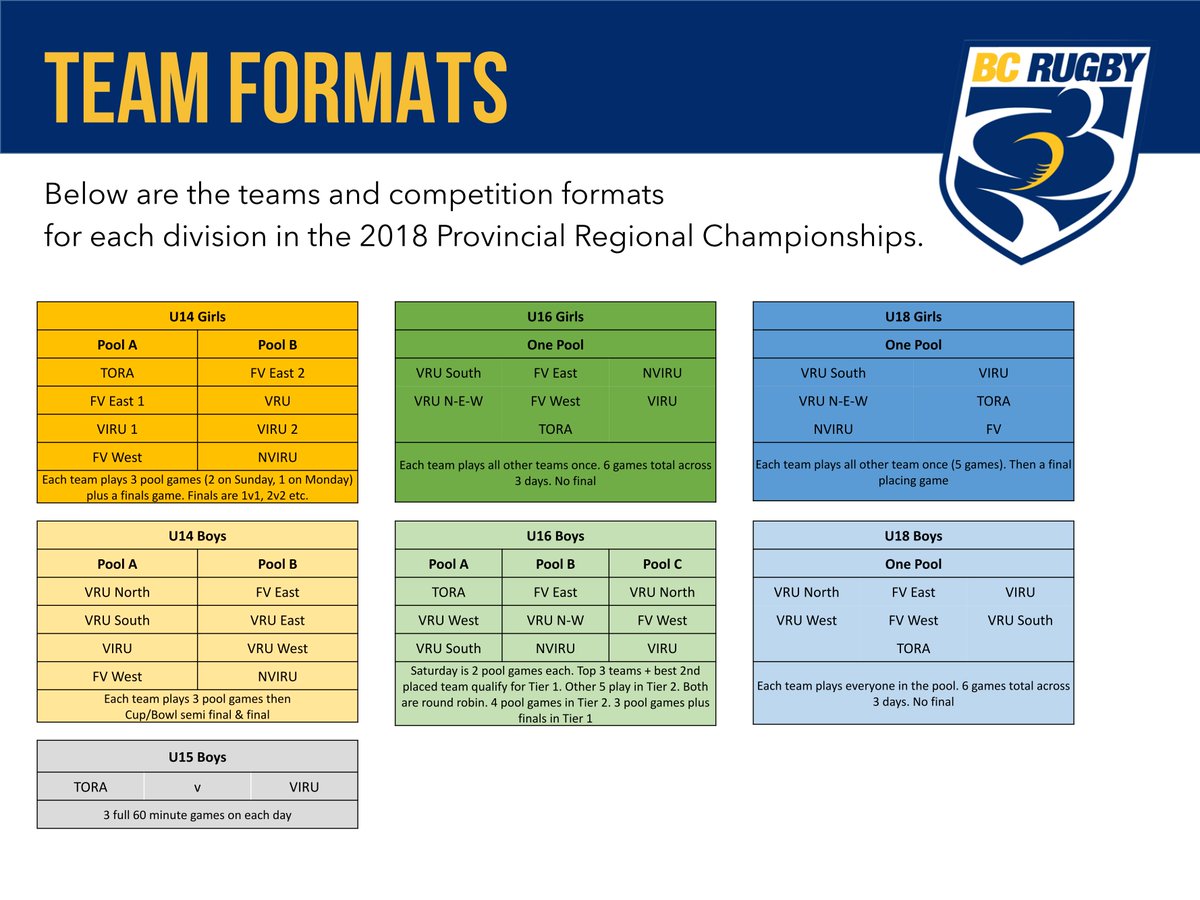 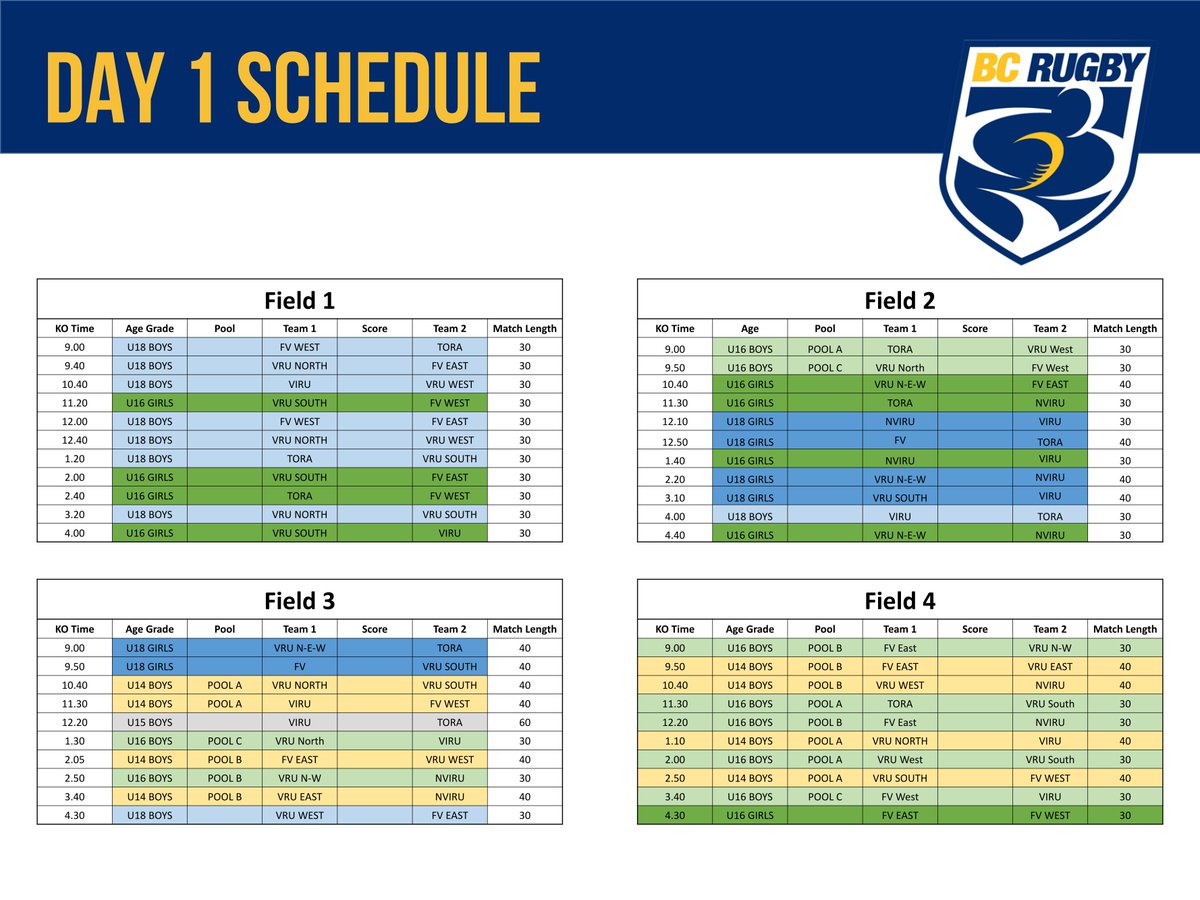 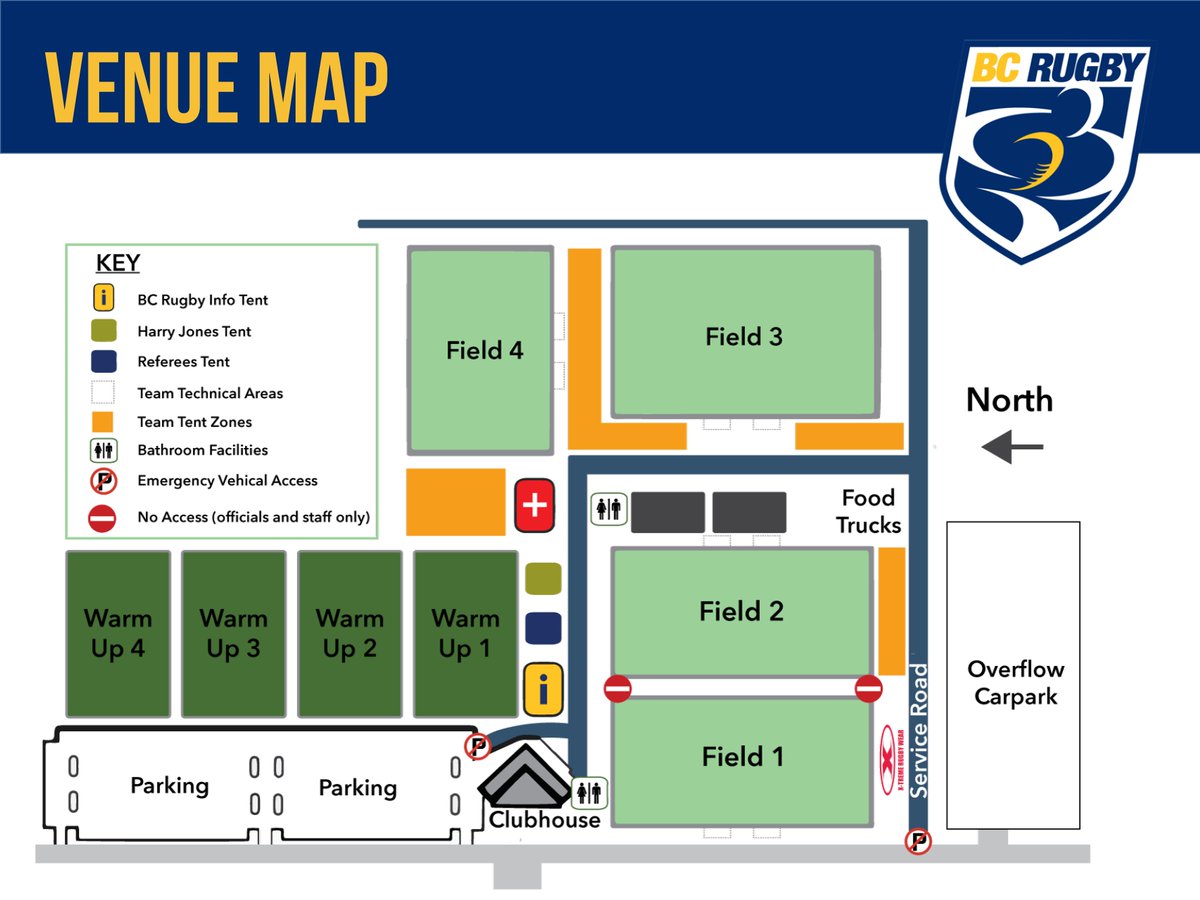 The full event program can be downloaded here in .pdf format