BC started the game in lively fashion and they could have had a try at 4 minutes in but an inside pass from Pitblado was dropped by Campbell a few metres from the line. There were already wide gaps showing in the Wolf Pack defence.

Wolf Pack opened the scoring 6 minutes in with a chip kick from Grady Bowd at #12 to Mozac Samson on the wing. A line break from openside Jordan Roberts led to the try, he split the gap between Ollie Nott and Josh Thiel. Defence again was going to be lax with 13 tries on offer on the day.

At 16' BC tied it up from a maul with hooker Steven Ng touching the ball down, converted by du Toit, 7-5 BC.

Wolf Pack hit back at 20' when Wayde Hodge the blindside shrugged off a du Toit tackle, he linked up with the openside Roberts who had a strong match and McRorie was the final runner to score the try, converted, 12-7 Wolf Pack.

Ng claimed his second try at 22' when BC had some pressure off a 5m lineout, he took a pass and drove low over the line, conversion good, 14-12 BC.

At 28' Wolf Pack powered over from a scrum, destroying the BC scrum, #8 Crowell touches it down after the pack did the hard work, 19-14 for Wolf Pack.

A great solo effort by Sean Ferguson at 33' sees him anticipate a LeSage pass and take the interception the distance for a try under the sticks, 21-19 for BC.

Rob Povey finished off the half with a penalty and a 22-21 lead for Wolf Pack.

19 seconds into the second half BC score the fastest try of the tournament. Wakefield takes the kickoff down to a maul, Pitblado notices no one is covering blindside and sprints down the empty wing, Sean Ferguson the winger is with him, #8 Dustin Dobravsky trailing. Two passes later Dobravsky is over the line, 26-22 BC.

Aaron McLelland was the next to score for BC after a nice counter attacking move that was the try of the match for BC, they turned the ball over a couple of metres from their line and then 10 passes and a few phases later they were over the line at the other end, 31-22 for BC.

At 50' BC again counter-attack with Sean Ferguson finishing it off with some speed down the wing, 38-22 BC.

Four minutes later McLelland scores a solo try off a kick return, 43-22 for BC.

The last quarter of the match devolved into a mess with 4 yellow cards, dubious refereeing calls, fragmented play, generally a bit of a gong show. The final was 48-32 for BC and they claimed 3rd place.

Man of the match was probably Aaron McLelland, he brings a unique ability in Canadian rugby, to open up defences from the fullback position.

Congratulations to Ontario who won Gold with a 22-17 win over the Atlantic Rock.


The Bears will play for 3rd place against the home town Wolf Pack today at 11am, the live stream is on the Rugby Canada facebook page, facebook.com/RugbyCanada

Some interesting changes from the coaching staff, first surprise is Josh Thiel at flyhalf. Why not I guess, GDT didn't stand out versus Ontario, Theo Sauder is injured so give Josh a shot and see what he can do. He's played various backline positions but we've never seen him in the #10 jersey. He'll be a running threat and we'll see what his distribution, decision making and kicking games are like.

Other surprises include moving Luke Campbell from #8 to second row, again why not, it brings Ollie Nott into the starting rotation and moves Dustin Dobravsky to #8 so the best players BC have can be on the field at the same time. Interested to know if Kingsley Jones had a say in seeing those players moved around.

Sean Ferguson is moved to wing to allow Aaron McLelland to start at fullback, another smart move. Neither Jared Douglas or Mike Nieuwenhuysen had strong outings last match so both get to be impact reserves this match.

One area that may be a concern is no cover for scrum half, Jorden Sandover-Best isn't listed, James Pitblado gets the start. Sean Ferguson could do a decent job at cover if necessary. With 6 of the 8 subs as forwards BC is likely planning a high tempo, physical match up front.

BC's defensive effort was poor last match and that's one area they'll want to improve with faster speed off the line and more aggression at the contact areas. 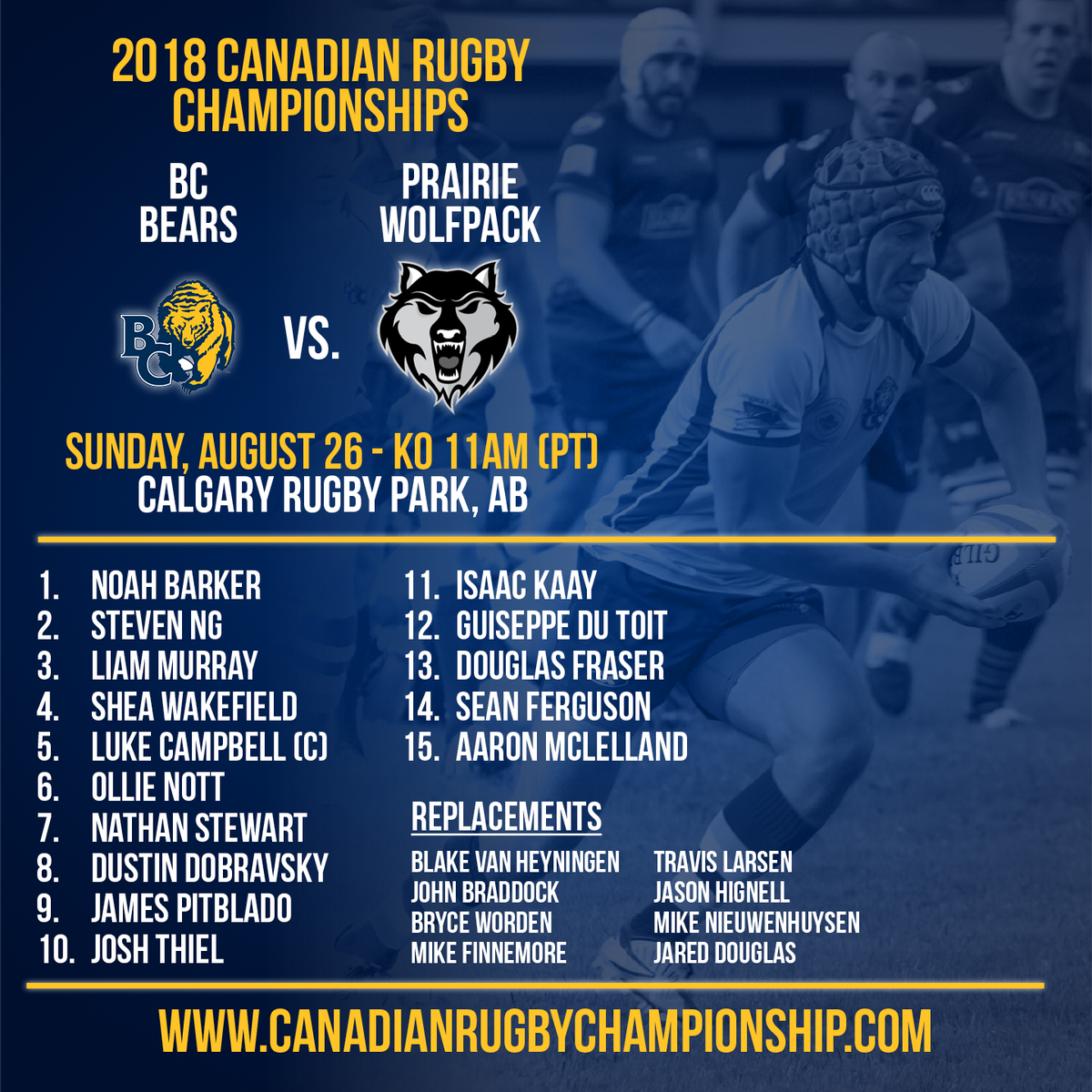