The championship final will be between UBCOB Ravens and Brantford Harlequins on Sunday at 4pm. The Fredericton Loyalists will meet the Edmonton Nor'Westers in the Consolation final at 2pm.

The Brantford game was close for most of the match, two penalty kicks gave the Ontario club a 6-0 lead 15 minutes into the match. Just after the 20 minute mark they added a try by openside flanker Kyle Morrison, converted for a 13-0 lead. The Nor'Westers stormed back in the second part of the first half and it was 13-12, a one point match, when the Nor'Westers picked up a yellow card for a high tackle. The Harlequins punished the 14 man Nor'Westers almost immediately for a 20-12 lead and that's how the half ended. It was mostly Harlequins in the second half as they added 14 more points to 6 for the Nor'Westers.

The Ravens match saw the home side put up points early and often. The back three of McLelland, Ferguson and Turner accounted for a number of tries. Turner opened the scoring 3 minutes in, but 7 minutes later Fredericton closed the gap with a long range penalty kick, 7-3. Three minutes later Braid crossed the line, 14-3. Six minutes later Ferguson was in 21-3, all the scoring coming from the backline at this point. 27 minutes into the first half the combative hooker for the loyalists, Curtis Lauzon, did his best outside back impersonation to score in the corner for their only try of the match, 21-8. Ravens immediately hit back with a try by McLelland, 28-8. Finally before half the Ravens got a forwards try when they mauled one in, the half ended 35-8. Ravens added 27 second half points to none to run out 62-8 winners.

OK we said starting rosters but this was written Thursday evening and dated for Friday and at the time of writing only the UBCOB Ravens have submitted their starting 23. It's a sign the home team are prepared but perhaps also the advantage the home side has in this tournament. The visiting teams are flying in today, the managers worrying about hotels, finding practice space, down the priority list is sending in their starting 23. They have until noon tomorrow (Friday) to do that.

There's no doubt that Ravens will be favourites going into the tournament. They've added Nakai Penny, Westshore and Seattle Seawolves, to the loose forwards and Connor Braid, JBAA, to the centres. Each team are allowed to add four players from their region. On the other hand they're missing a few regulars due to injury, Karl Moran out with a concussion. Paul Ahn out due to injury. They're missing 7 players from their last league match when they defeated Burnaby. Some of the replacements are a bit of an unknown and we'll see how they do on game day. The Ravens have the backline to open defences with Aaron McLelland and Sean Ferguson part of the back three. They'll punish teams that kick away the ball. With the addition of Connor Braid in the centres they'll be a threat through the middle as well. When the Ravens have looked ordinary is when their forwards have been outworked at the breakdown. We'll see what the Loyalists bring tomorrow on that front. We'll add their roster when it's available. We're setting up the live stream so likely won't find much time to update this article during the day. The live stream is at: https://www.facebook.com/CanadianRugbyClubChampionship/

This should be interesting, no idea of comparative form and that's one of the purposes of the tournament, to give clubs and regions a chance to compare and compete. There's a few names on both teams that we recognize from their time in BC, Adam Roer with Westshore, proud father Rae taking the trip from Victoria to support the Nor'Westers. Trevor Leota well known at the international level from years gone by, getting up in years now at 43 but no doubt a great impact sub. For Brantford Steve Piatek, Jordan Kozina, Ethan Hager, Dan Mathie all familiar names. Harlequins just coming off their provincial final where they narrowly lost to Markham Irish might get the slight nod. Prediction: Harlequins by 3. 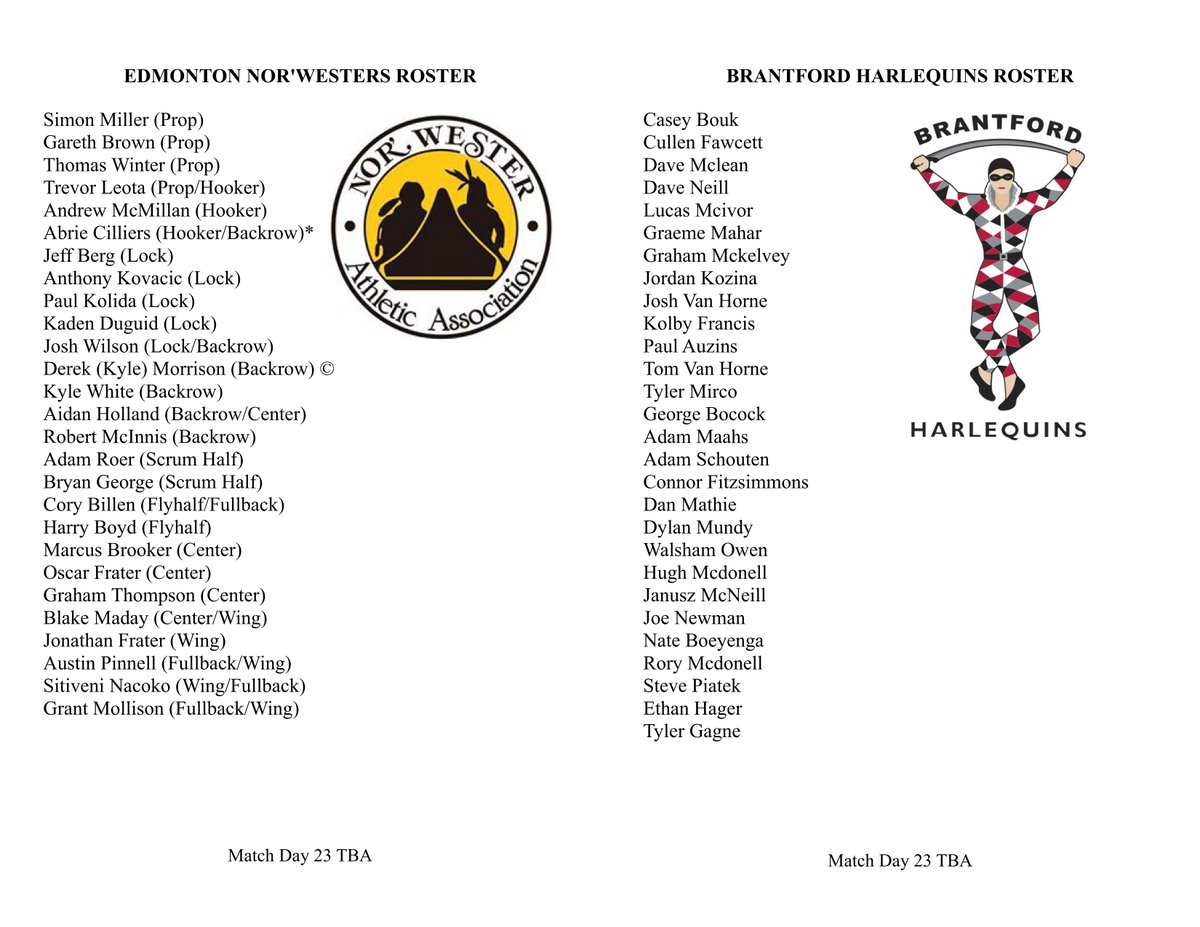 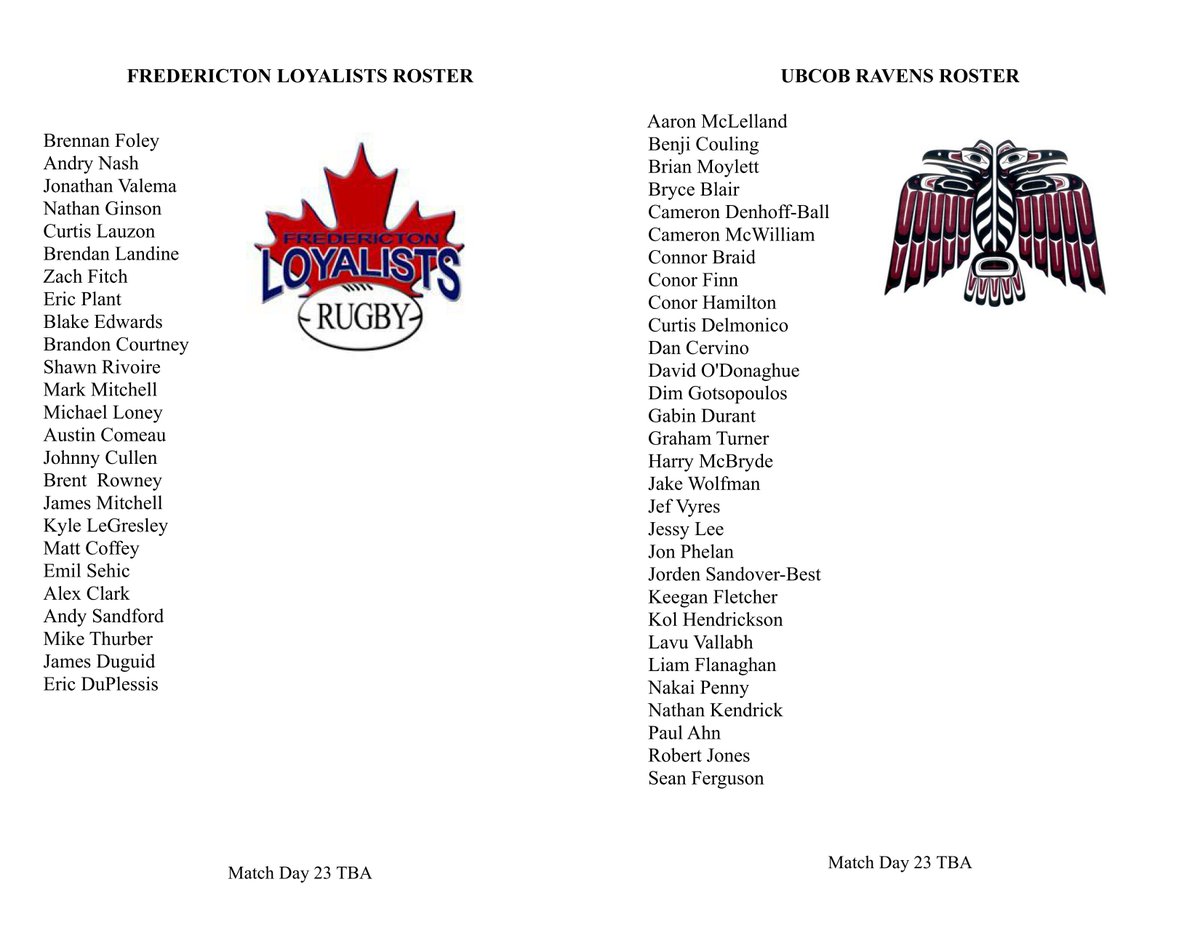