There's not a lot to say about the match, Seattle were that much better. A few Tide players stood out, Jared Stephens from Nanaimo was probably Tide's top player. We already knew that he was one of the top outside centres in the BC Premier league and he showed why in the match against next level opposition. Whether that gets him some interest from the national squad or the MLR remains to be seen. The Tide pack had a strong 2nd quarter dominating several scrums after an even battle in the first quarter. The Seawolves owned the scrum in the last quarter after subs were brought on.

Seattle played with some precision in rainy conditions and had the better of the Tide out wide and at the breakdown. Being an exhibition match the Tide turned down 3 points on several occasions but it wouldn't have changed the final outcome.

For Seattle they had a number of standouts, Peter Tiberio scored 2 from his wing position, 4 of the 8 tries were scored by the back three where Seattle had a distinct advantage. Their loose forwards Eric Duechle and Vili Toluta'u were big and physical and had the advantage over their counterparts, Toluta'u scored a try as well. Phil Mack as team leader and acting coach was his usual creative self and also scored a try.

The live stream had 5,000+ views at the time of writing, split almost equally between BC and Washington State, with significant viewership from California, Ontario and Alberta.

Below is the full match video, interviews with Ray Barkwill and Kingsley Jones and photos from Chris Wilson.

The defending MLR champions Seattle Seawolves kick off their season this weekend as they visit Victoria for a preseason match versus the Vancouver Island Crimson Tide on Saturday at Westhills Stadium (4pm). The MLR added two more teams this season, Toronto and New York. The regular season kicks off in January.

An early look at the rosters sees a number of BC players travelling with the Seawolves: Brock Staller, George Barton, Phil Mack will likely get starting roles in the backs. Nakai Penny and Cam Polson will be available in the forwards. Ray Barkwill is still a name missing from the Seawolves roster at this point.

Expect some familiar names up front with Kellen Gordon, Mike Shepherd and John Hayden. It's not clear if Tim Metcher, their top tighthead last season, will be making the trip. Second row Taylor Krumrei and Jeremy Lenaerts, and a potent backrow of Eric Duchele, Alladin Schirmer and Vili Toluta’u.

In the backs Phil Mack, of course, at scrum half pairing with Shalom Suniula. New addition Ben Cima on the bench waiting to show his skills. The centre pairing likely will be George Barton and big William Rasileka with Brock Staller on one wing and Peter Tiberio on the other, Mat Turner at the key fullback spot. Roland Suniula to sub in during the match.

Since this is an exhibition match expect both teams to carry more than the standard 23 players so that coaches can evaluate players. The game will likely have a short break at the 20 minute mark as we hear this will be a feature of the 2019 MLR to allow for commercial breaks.

For the Tide likely a front row of John Braddock, Foster Dewitt and Blake van Heynigen, a CW, Westshore, JBAA alliance. Ryan Kotlewski was out of town and missed the two practices so it's not clear whether he'll be part of the match day extended squad. Front row replacements would be Andrew Macpherson (JBAA), Antonio Corbin (Nanaimo) and Clayton Thornber (CW). Expect a capable second row of Mike Finnemore (CW) and Shea Wakefield (JBAA) with loosies Nathan Stewart (CW) and Kelton Dawe (CW) with JBAA Luke Campbell at #8.

Going up against Phil Mack is likely Nanaimo's Sam Fowler and CW's Cam Hall probably taking the starting flyhalf spot. Centres CW Brandon Schellenberger and Nanaimo's Jared Stephens, with a back three of Nate Tough (JBAA), Crosby Stewart (UVic) and Thomas Burton (JBAA). Again lots of subs - one of the more influential could be Canada U20 and UVic player James O'Neill at flanker.

Seattle will go in as favourites, a professional squad, defending champions, up against a good amateur side with only two practices. Also some top players like Doug Fraser (Austin Elite) and Noah Barker (Glendale Raptors) recently left the Tide ranks to join MLR teams. It will be a scrappy Tide squad, perhaps undersized in some areas but they'll likely play an up tempo game hoping to catch the champs in preseason form and fitness.

Hopefully it will give Seattle coaches a good test of their players and give the Tide players a platform to get noticed by a larger audience. The game will be streamed on FB, yours truly doing the technical production and camera, Bryan Kelly the commentary. The FB page is here:
https://www.facebook.com/VancouverIslandTide 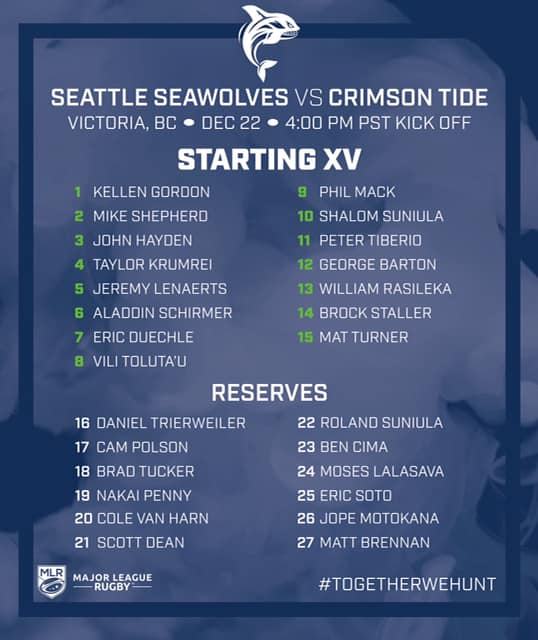 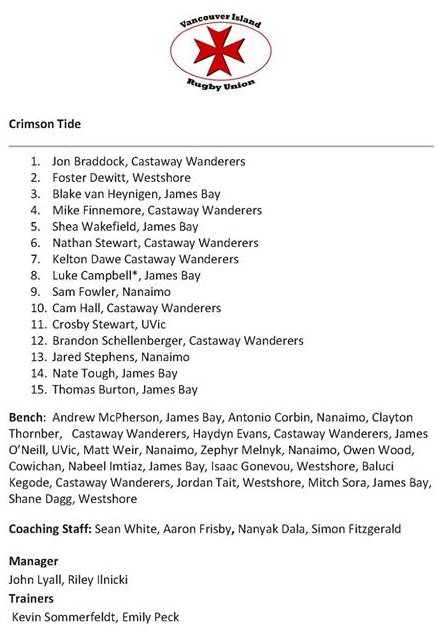 When did the term Crimson Tide come into common use for the Victoria rep team, later to become the Vancouver Island rep team. We're still looking for a definitive answer but we found this newspaper clipping from 1936 in the Daily Colonist that shows it in use. Interesting the date of the clipping is December 22nd 1936, the same date as the current match but 82 years in between.