A few glitches for the new league in Week 12. The Austin Elite couldn't make it to Toronto due to "weather related flight issues". The game will be postponed until a further date which will be interesting as the teams don't have a bye on the same weekend. A few games will likely be shifted around to make this possible but with only 7 weeks left there aren't a lot of options. Arrows host Houston next weekend and Austin have a bye.

Talking of Houston their new rugby specific stadium was lauded as the second in the country after Glendale's. Only glitch is the turf wasn't completely ready, it got shredded so badly in the first quarter that the match went to uncontested scrums for safety reasons and to preserve what was left of the turf.

USA Rugby and MLR have signed a strategic agreement, included below, question is where does that leave Rugby Canada and MLR? There's no doubt that MLR Rugby is mostly USA focused with 11 USA teams and 1 Canadian team in the 2020 season. There are supposed to be 16 teams by 2022.

NOLA remained top of the league with a 28-19 with over Utah. Seattle moved up to second with a dominant 52-10 win at Houston. Nakai Penny scored a try, likely his first in MLR, and played the full 80. Phil Mack played the first 60 minutes, George Barton came off early, we're not sure if that's an injury concern as he had just returned to the roster. Brock Staller played the full 80 and increased his MLR lead in total points to 128, +17 on his NOLA rival. Djustice Sears-Duru came off the bench as a replacement prop in the second half. San Diego upset RUNY to claim 3rd place. There are 7 weeks left in the regular season, Seattle host NOLA this coming Sunday in the battle of the top two. Toronto host Houston, RUNY host Utah and San Diego host Glendale. 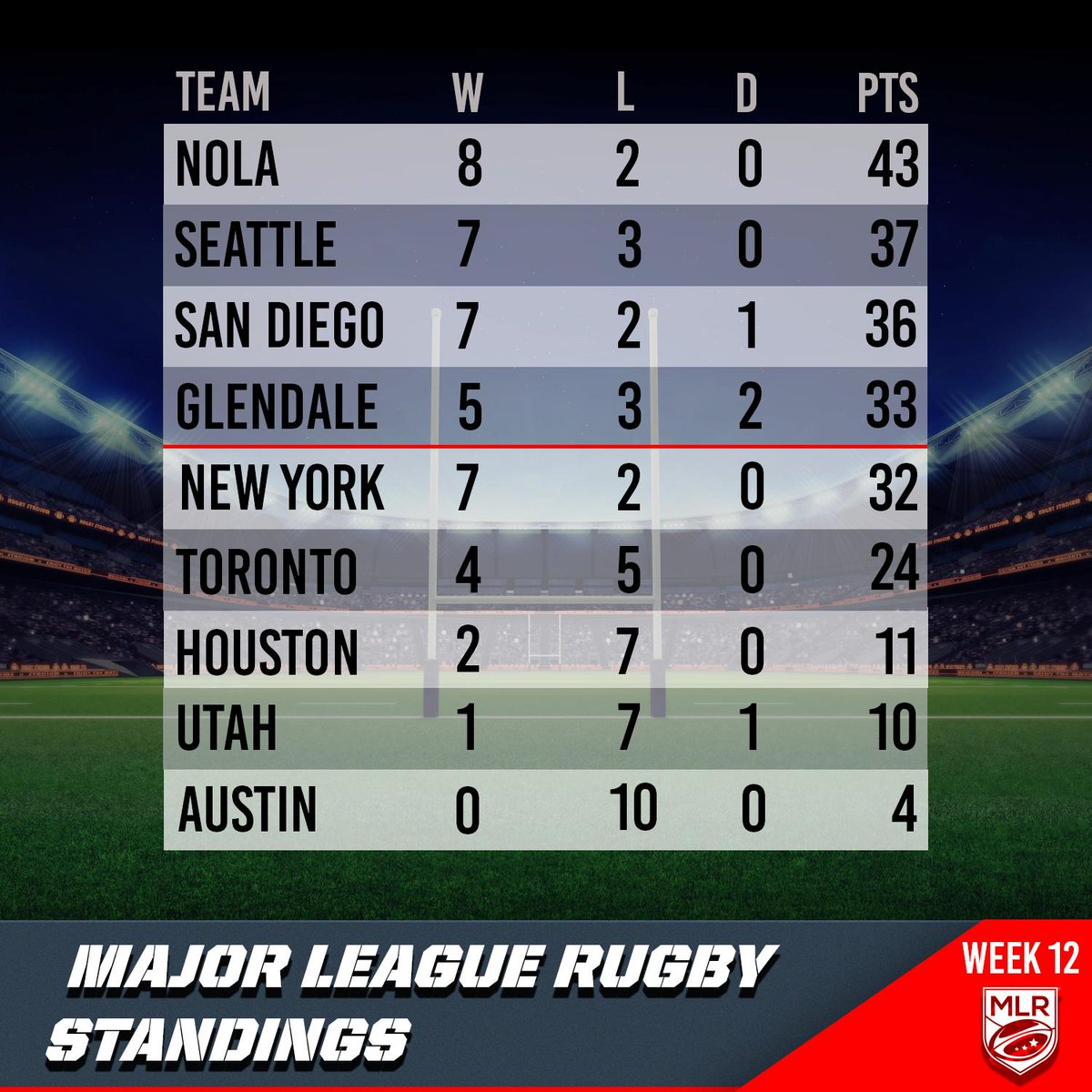 Professional Advisory Board: Committee to streamline communications and action items, ensuring alignment and development of professional standards.
Houston, Texas; April 15, 2019: USA Rugby and Major League Rugby (MLR) today announced a finalized strategic partnership centered around the shared goal of developing the game of rugby in the US. Having worked closely through the league’s first season and a half, MLR and the national governing body formally established a framework for collaboration on key areas of mutual interest including: driving rugby’s growth as a participation sport; high performance pathways to ensure that MLR and the USA Rugby Men’s National Team are capturing the best available talent; and initiatives to propel rugby’s visibility and relevance in the North American sports landscape.

The execution of the sanctioning agreement is the first milestone in what both sides expect to be a long-lasting partnership. The agreement creates an initial framework for the collaboration and addresses a number of areas of mutual interest such as conduct of competitions, player welfare and safety, international releases and other logistical and administrative interactions between the two organizations, shared marketing initiatives and working high-performance partnership designed to build connections between MLR Teams and the US Men’s National Team.

“It’s been exciting over this first year and half with Major League Rugby, evaluating strengths and challenges in lead up to this completed agreement,” said USA Rugby CEO, Ross Young, “the advent of professional rugby is such a substantial step in advancement of the game, so we’re happy to have built a robust partnership to best find mutual support in each other.”

“This partnership is critical for rugby to reach its full potential in the United States,” said MLR Commissioner Dean Howes, “we have created the foundations of a partnership that aligns our goals so that we can work together to grow rugby’s share of the American sports market from youth participation through to MLR and the US national teams.”

Additionally, a Professional Advisory Board will be established with representative members from each organization and one from World Rugby. The committee will look to streamline communications and action items between both entities, ensuring all are aligned toward the development of professional standards of rugby in the United States.

Young continued, “I want to thank Dean Howes, Nic Benson and the team at MLR for their energy in this agreement, we very much look forward to this new chapter of American rugby.”

ABOUT USA RUGBY
Established in 1975, USA Rugby is the governing body for the sport of rugby in America and a Full Sport Member of the United States Olympic Committee. Currently headquartered in Lafayette, Colorado, USA Rugby is charged with developing the game on all levels and has more than 120,000 active members across the youth, High School, College and Senior club level. USA Rugby oversees four national teams, multiple collegiate and High School All-American sides, and an emerging Olympic development pathway for elite athletes. It also hosts more than 30 national playoff and championship events each year as a service to its members. In 2018, USA Rugby welcomed the world for Rugby World Cup Sevens in San Francisco, the first-ever Rugby World Cup hosted on American soil. With over 100,000 in attendance, the event broke various American records and has acted as a launching point for the game’s future growth. Visit www.usarugby.org for more information.

ABOUT MLR
MLR is a professional rugby league launched in April of 2018. It’s an initiative of the North American rugby community, in partnership with private investors, who believe that North American rugby can thrive at the highest levels: as a commercial enterprise; as an influential player on the international scene; and as a participation sport at the youth and senior level. MLR will be the pinnacle of North American rugby, and provide a rallying point for local communities, a focal point for North American rugby fans, and an aspirational destination for young athletes. There are already over 40 internationals and players from more than 15 countries playing in the MLR. Twenty-two MLR stars represented the USA Eagles and Canada national teams in the opening round of the 2019 Americas Rugby Championship, with more than 30 called up over the course of the tournament.