The quarter-final match came down to one play in the end, a missed tackle by Farella on the last play of the game. Rugby 7s can be an unforgiving game. Charity Williams was the hero for Canada when she pulled Canada even with a try in the last minutes, converted by Landry. The match was an arm wrestle with USA holding the lead until the last two minutes when Charity Williams scored a solo try from 50 metres out. It's a play Canada uses at key times when Charity Williams is brought in as scrum half, she feeds into the scrum and then takes the ball at the base of the scrum to scamper down the blindside using her pace to score. It worked and Canada were even at 7-7. Next try would win. It came too easy for USA on the ensuing kick off when Farella was shrugged off by Kelter, then Paquin was fended off. Two of Canada's top players beaten defensively with ease with the game on the line, it was disheartening. Something Canada will have to address if they want to medal again in 2020. With that result USA will qualify for the Olympics when they play their first game in Biarritz. Canada will have to make the Cup round to claim that right on Day 1.

After the disappointing quarter-final loss it was good to see Canada's attitude was still positive. They came out strong and made short work of Spain running up a 19-0 half time lead and then cruising to a 31-0 win.

Another big win to finish the tournament, the team leaders like Landry, Paquin and Farella picked up their game after the two losses to Australia and USA.

Canada are now at 78 points in 3rd place. France (60 points) are the only team who have a mathematical chance of displacing Canada and Australia (74 points) in the final four. France would have to win the title in Biarritz and hope either Canada or Australia don't make the Cup round. It's a highly unlikely scenario. If Canada make the Cup round at the end of Day 1 they'll book their place at the 2020 Olympics.

The opening minute previewed the theme of the match and perhaps the tournament, Canada used their physicality to push Brazil off the ball and turned the ball over but in the ensuing play, home town player Caroline Crossley, felt the pressure and dropped an easy pass. Britt Benn and Ghislaine Landry teamed up for the first Canada try. Canada looked a little nervous in the first few minutes picking up several penalties, two for high tackles and the final one was a yellow card to Kayla Moleschi. Brazil went ahead 7-5 with the player advantage, there were 2 minutes left in the half. Moleschi came back on the field after the sin bin and scored a try to put Canada ahead 12-7 at the half.

Canada scored again to open the second half, a team try finished by Emma Chown. Karen Paquin had come on at half time and made a couple of strong runs. Charity Williams scored next and it was 26-7 Canada with just over 3 minutes left. Another Williams try a minute later set up by strong counter-rucking by Karen Paquin, 31-7. Paquin closed out the scoring for a 38-7 win. The entire bench got in the game except Bianca Farella so there may be some injury concern there.

Ireland scored first after Canada botched a scoring opportunity, Charity Williams missed her tackle and the Irish scored a long range try, 0-5. Britt Benn scored a solo try beating a tackle, 5-5, and that was the score at the half. Canada weren't looking too sharp, their defensive pressure had dropped off and Ireland had most of the possession.

Canada got back into their rhythm in the second half, keeping possession, winning the contact area and patiently recycling the ball. Ghislaine Landry was the player outside who crossed the line for the try. Canada's next try was a result of some niggle at the breakdown which caused the ball to pop out of the ruck, Britt Benn swooped in to pick the ball off the ground and dished off to Paquin for the try. Paquin scored the last try for Canada with a long run through the middle of the Irish defence, 22-5. Again the whole bench was in the match except Bianca Farella.

Bianca Farella finally got on the field as one of the starters and Canada fielded their strongest lineup for an anticipated tough match against the reigning Olympic champions. Canada started well with a breakaway try by Julia Greenshields, Australia tied it up with over a minute left in the half, 7-7. Australia scored just before half and that was the back breaker, it should have been Canada scoring as Landry broke away and was tackled 10 metres from the line but Canada's support play was very poor. Australia countered and this time they had support to finish it off. This was down to hussle and work rate and why Australia were ahead at the half, 7-14.

Farella scored the first try of the second half after Australia picked up a couple of penalties for not rolling away at the tackle area, 14-14. The match changed when Ellia Green came on as an impact sub at 11 minutes. The first time she touched the ball on the outside she beat the Canadian defender, Kaili Lukan, and she made it look easy. The last 2 minutes belonged to Australia, Landry dropped a pass at Canada's 22 and Australia picked it up and added 5 more. Canada made more handling errors and again Ellia Green got the ball and zigzagged her way through the Canadian defence for a long range try. A disappointing way to end the match.

Canada face USA tomorrow and they'll need improve their work rate and keep the handling errors to a minimum if they want to progress to the semi-finals. Attendance for Day 1 was estimated at 3,300.

The Canada 7s in Langford kicks off today, here are the team rosters and player profiles. They can be viewed/downloaded in .pdf format at the links below.

Canada has the most experienced squad with 214 event appearances in total.

The images below show the Canada roster and a sample of the profile information on each player at the tournament. 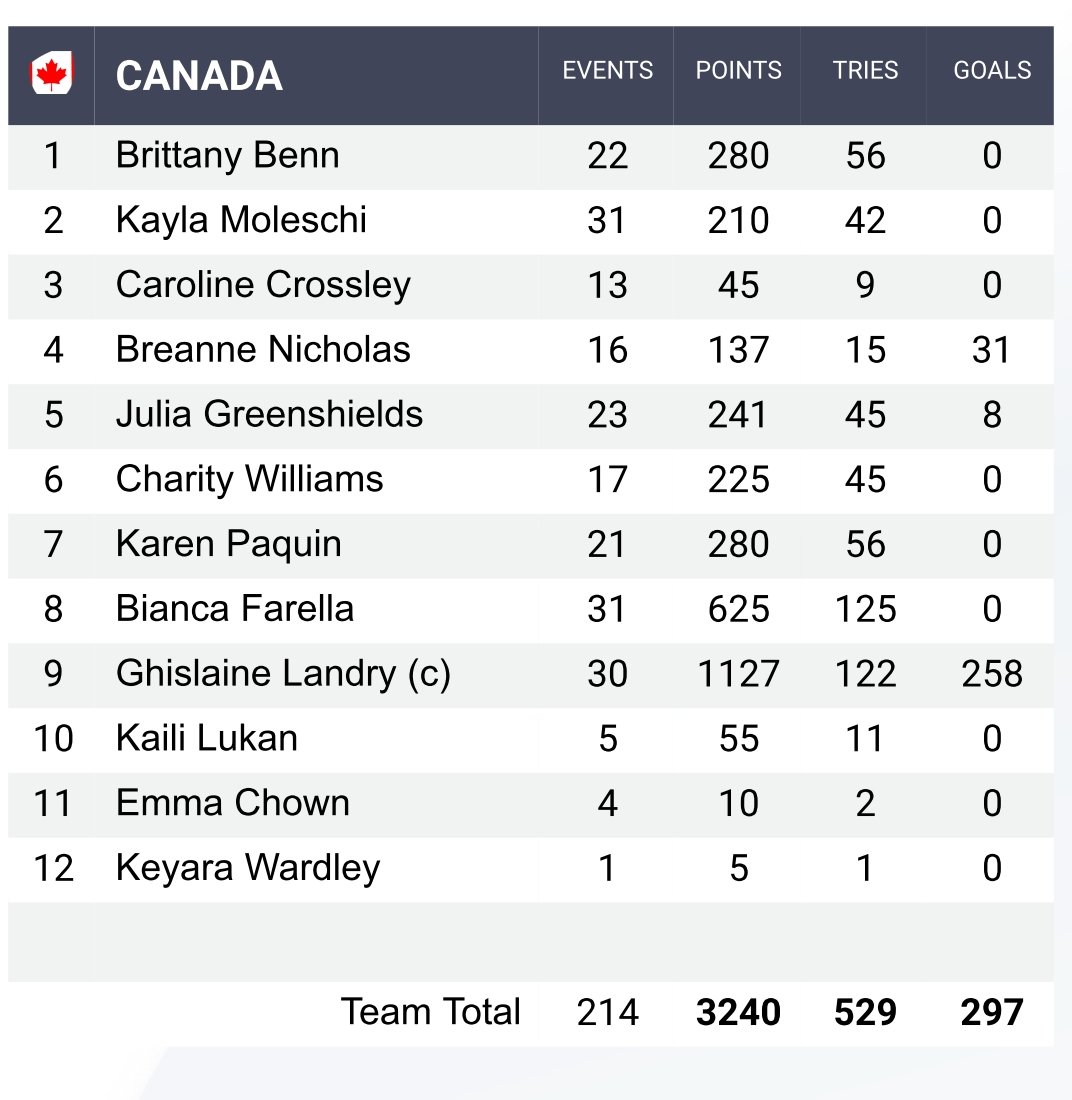 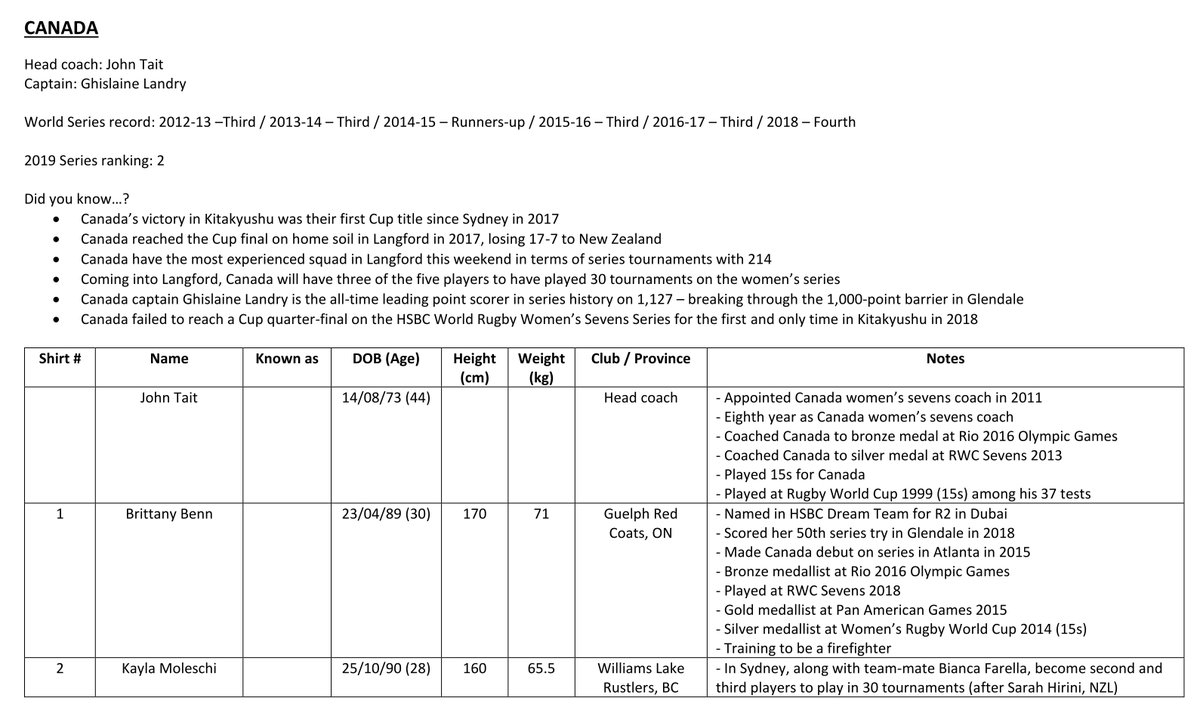 Pools Announced for Canada 7s in Langford: Canada in Pool with Australia, Ireland and Brazil

It's a tricky pool for Canada as Australia are defending Olympic champions and are currently playing below their top level, sitting in 4th place in the series. Ireland are constantly improving and a tough match. Brazil just won promotion to the series for next season and will look to push teams in their new role. There will be no easy games - Canada start the competition at 11:28am on Saturday against Brazil, then face Ireland at 2:12pm and complete Day 1 at 4:56pm against Australia.

The pools and match schedule have been announced for the HSBC Canada Women’s Sevens in Langford, Victoria, on 11-12 May. Canada sits in Pool A with Australia, Ireland, and Brazil.

The penultimate round of the HSBC World Rugby Women’s Sevens Series 2019 is expected to be key in not only the race for the title but also for qualification for the Tokyo 2020 Olympic Games.

The top four teams in the 2019 series will confirm their place in Tokyo alongside host nation Japan with New Zealand, Canada, USA and Australia currently in the coveted spots.

With New Zealand and Canada now sitting 26 and 20 points above fifth place France respectively with two rounds remaining, it is possible that Langford will see the first teams secure qualification for Tokyo 2020 after hosts Japan.

Brazil, hosts of the Rio 2016 Olympic Games, will join the 11 core teams in Langford as the invitational team, only weeks after securing their return to the series next season as a core team with victory in the qualifying tournament in Hong Kong.

Canada will go into their home event in buoyant mood after winning the title in Kitakyushu last weekend, their first Cup success on the series since February 2017.

They will face Australia, runners-up in Langford in 2018, as well as Ireland and Brazil in Pool A at Westhills Stadium.

While the race for Olympic qualification has tightened after Kitakyushu, the same is true of the battle to avoid relegation from the series with Spain, Fiji and China separated by just six points with two rounds to go.

World Rugby Chairman Sir Bill Beaumont said: "The penultimate round of the HSBC World Rugby Women’s Sevens Series in Canada is set to be a thrilling event for players and fans around the world with qualification to the Tokyo 2020 Olympic Games at stake alongside the race for the series title.

"The results in Kitakyushu are a strong demonstration of the increasing competitiveness in the women’s sevens game with any of the top teams capable of beating each other.

"These are exciting times for sevens with the women’s series set to expand from six to eight rounds over the next four-year cycle, an historic move that will provide more high-quality competitive international playing opportunities for women’s sevens teams, a core strand of our Accelerating the global development of women in rugby plan."

Single day tickets for the HSBC Canada Women's Sevens will go on sale on Thursday, 25 April at 10:00 PST (GMT-7). General admission tickets start at CAN $30, or $25 when purchasing 10 or more tickets (group rate). For pricing and ticket options, visit www.canadasevens.com/womens/tickets.

The action will get underway with New Zealand's encounter with Russia at 10:22 local time on 11 May.

For more information on the series, visit www.world.rugby/sevens-series and follow @WorldRugby7s.