Toronto are making the most of their home stand and won two games this week, one the postponed game versus Austin and then the scheduled game vs Utah. There are 6 teams now in the running for the 4 playoff spots with 3 weeks remaining. New York and Glendale currently sit in 5th and 6th spot but have a game in hand on Toronto who only have two games left. Toronto have a bye next week and then face Glendale and New York in important matches that will decide the final four.

Seattle's big game is next week away in Glendale, if they win that they will be looking good for a top four finish. They then finish at home versus Utah and Austin.

The Toronto Arrows defeated Austin Elite Rugby 24-13 to pick up their second victory in five days on Thursday afternoon.

Toronto’s (8-5) victory over Austin (0-12) was their fourth in a row. The match was originally scheduled to be played back on April 18 but had to be moved to Thursday night as storms in Texas prevented Austin from travelling. They’ll have a chance to extend that win streak to five when they welcome the Utah Warriors to town for their third match in eight days.

Austin held a 6-0 lead early on two Andres Vilaseca penalty goals, but the Arrows answered back with tries. Andrew Ferguson, Leandro Leivas, Rob Brouwer, and Kainoa Lloyd all scored tries for the Arrows while Simon Bienvenu scored Austin’s lone try. Ferguson scored the first try of the match and hit two of his four conversion attempts to lead all scorers in the match with nine points.

The five points that the Arrows picked up in the victory keeps them alive in their pursuit for a playoff spot. The win gives them 43 points on the season and moves them into third place in the table ahead of the rest of the Week 16 action. Austin didn’t pick up any points in the loss and remain in ninth place with four points on the season.

Toronto will have a chance to extend their win streak to five matches when they welcome the Utah Warriors (2-9-1) to town on Sunday, May 12 for their third match in eight days. Austin will enjoy 10 days off before travelling to Brooklyn to take on Rugby United New York (9-3) on Sunday, May 19.

Despite a furious comeback attempt by RUNY (9-4), it was the Seawolves (9-4) that weathered the storm and emerged with the win. Each team scored five tries in the match, but it was Seawolves’ wing and Major League Rugby’s leading scorer Brock Staller’s accuracy in the kicking game that was ultimately the difference in the match. Staller nailed all five of his conversion attempts and hit his lone penalty goal to lead all scorers in the match with 13 points.

Seattle will travel to Glendale to take on the Raptors (7-4-2) on Saturday, May 18 in a match that carries with it significant playoff implications. RUNY will look to get back into the win column against Austin Elite Rugby (0-13) back at home on Sunday, May 19.

The Toronto Arrows defeated the Utah Warriors 28-21 on a rainy day in Canada on Sunday afternoon.

The Arrows (9-5) used two second-half tries to thwart the Warriors’ (2-10-1) attempt at a comeback. The Arrows received tries from Morgan Mitchell, John Sheridan, and Spencer Jones in addition to forcing the Warriors into a penalty try en route to their third win in eight days and their fifth win in a row. Utah’s Tim O’Malley led all scorers in the match with 11 total points.

The five points that the Arrows picked up in the victory leaves them in third place with 48 total points in the table with two matches to play. They sit just three points behind the second place NOLA Gold and four points behind the first place San Diego Legion. The Warriors picked up a bonus point in the loss. They sit in seventh place with 17 total points on the season.

Utah will look to get back in the win column on Saturday, May 18 when they host the first place San Diego Legion (10-3-1) while Toronto will enjoy a week off.

After a back-and-forth match that saw both teams dig deep into their reserves in the New Orleans heat, it was the Legion (10-3-1) that held on for the 26-19 victory and jumped over the Gold (9-4) to retake first place.

After suffering a tough 23-19 loss to the Toronto Arrows on the last play of the match a week earlier, Legion head coach Rob Hoadley was happy to see his side respond to a tough opponent and tough conditions on Saturday afternoon.

“Critical to see a reaction this week,” Hoadley said after the match. “Our performance, more than the result, was disappointing last week. We lost with the last play of the game against a tough Toronto side, but didn’t play to our standards.”

The work began in the sixth minute when fly-half Joe Pietersen skipped a ball out wide to wing Savenaca Totovosau who dove in for the first try of the match. Pietersen was unable to hit the conversion, but the Legion took an early 5-0 lead.

Despite giving up an early try, the Gold didn’t play discouraged. The effort was evident in the strong tackles that they made throughout the match. They were rewarded for their efforts in the 16th minute when eight-man Cam Dolan caught the Legion defense napping and picked the ball out of the base of the ruck and snuck in for the Gold’s first try of the match.

Fullback J.P. Eloff’s conversion attempt rattled off the right upright, so the Gold and the Legion went into the 20-minute hydration break tried 5-5.

San Diego found their way back onto the scoreboard first out of the hydration break. After some battle for positioning, Legion fullback Mike Te’o took the ball with pace down near the touchline when he found wing Nick Boyer outside. Boyer hit the brakes and froze the Gold defense before scampering into for the Legion’s second try. Pietersen hit the conversion to give San Diego a 12-5 lead in the 28th minute.

The 30th minute is when the fatigue set in.

The Gold went to two of their top performers to respond. Eloff took a Legion kick and ripped off a long run down the touchline. After trucking a San Diego defender, the Gold worked the ball out to outside center Tristan Blewitt who finished off the sequence with a try right between the pipes. Scott Gale nailed the conversion to tie the match at 12 heading into the half.

Both NOLA and San Diego settled in to play some defense and wear each other out a bit more on the other side of the half. It was the Legion whose efforts paid off first.

The Legion’s third try of the match came in the 43rd minute when scrum-half Nate Augspurger drew the defense to his left before throwing a beautiful no-look pass back inside and into the waiting arms of outside center J.P. du Plessis who snuck through the defense. Pietersen kicked the conversion to give the Legion a 19-12 lead.

NOLA answered back with a try that stemmed out of pure effort 10 minutes later. Wing Nick Feakes attempted to kick the ball into touch, but instead of bouncing out of bounds, the ball took a bounce back into the pitch and into the hands of a hard-charging Blewitt who rumbled in for his second try of the match. Gale hit the conversion to tie the match at 19 heading into the 60-minute hydration break.

The first 60 minutes of the match saw both teams lose a handful of key players to injuries. Two of those included Eloff and Pietersen, both of the team’s top scorers.

With the pressure mounting, it was San Diego’s bench that rose to the occasion.

The Legion worked their way down the pitch late in the second half and found themselves just inside NOLA’s 22-meter line. Replacement fly-half Tai Enosa received the ball out of the back of a ruck and stepped hard off his left foot to squirt through the Gold defense for San Diego’s fourth try of the match. Will Holder stepped in for an injured Pietersen and nailed the conversion to give the Legion a 26-19 lead heading into the final 10 minutes of the match.

“The attrition rate goes to show how tough the game was, as both teams lost key players and had to adapt,” Hoadley said after the match. “Tai Enosa was outstanding stepping in for Joe Pietersen, and he was joined by an outstanding effort by the full squad as every player contributed. Playing into the wind in humid conditions in the second half, their impact was instrumental in securing five points. At this time of year, squad depth is key to all teams across the league.”

With time working against them, NOLA never quit. They battled their way all the way down inside San Diego’s five-meter line, but the Legion stood strong and eventually forced the Gold into a knock-on in stoppage time. The Legion walked away with a 26-19 victory.

The Legion picked up five points in the victory to jump over the Gold and back into first place with 52 total points in the table while the Gold picked up a valuable bonus point to reach 51 points on the season and help them inch towards locking up a playoff spot.

On top of the points, Hoadley also believes his team gained some valuable experience in the match as well.

“We take a lot from our close victories this season,” Hoadley said of the match. “Comebacks to beat Houston, draw with Glendale, defend against Seattle with two yellow cards and a red card have been an illustration of how this squad loves to compete for each other.”

The Legion will look to keep the momentum rolling against the Utah Warriors back at home on Saturday, May 18 while the Gold will welcome the Houston SaberCats to town for an important match.

Saturday’s match between the Glendale Raptors match and the Houston SaberCats was postponed as a result of poor weather. The match has been rescheduled to take place on Wednesday, May 29 at the AVEVA Stadium at 8:30 PM EST. 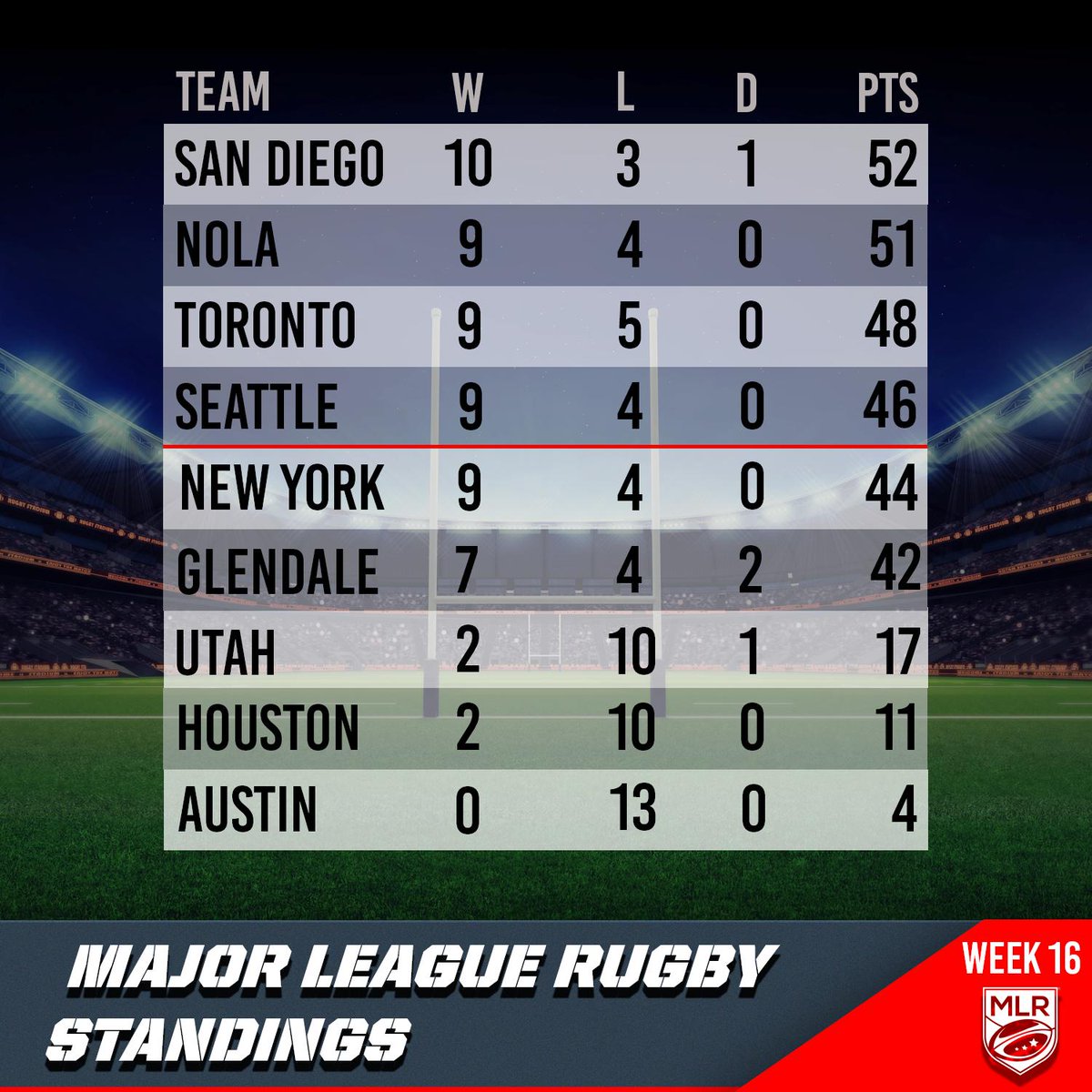