So What Went Wrong with Canadian Rugby? | Squidge Rugby Video: It's Good But There's More to the Story

[ed. note correction below Tim Powers was not Chair when Jim Dixon was hired it was Pat Aldous. Tim became Chair in 2016.]

You've probably seen the video by @SquidgeRugby - it has been popular on social media, 209 likes on Twitter, 36 retweets and 25 comments. About 73,000 views on YouTube, that's more views than anything Rugby Canada has posted on its YouTube channel except when they posted the NZ Maoris performing a haka at BC Place.

It's sometimes good to see a view from outside, the humorous nature of the video has made it popular and it's resonated with fans and players alike. Karl Fix sent out some "for your eyes only" messages from former and current players such as "pretty much hit the nail on the head" and "Wow what a painfully accurate video". So well done Squidge. You should look at some of his other rugby videos as well.

Now on to the serious stuff, what did the video get right, not quite right and what else is to consider on the issue of "So What Went Wrong with Canadian Rugby".

What the video gets right

- rugby does have a rich history in Canada
- the 2015 RWC with no wins was a low point that has become the norm
- decisions to hire Anscombe and Jones came "straight from the top"
- CEO Vansen isn't a rugby man, decisions are made on financial logic rather than rugby logic
- Canada is a vast country (which is relevant to the issue of rugby development)
- relatively small player pool compared to other RWC teams
- Canada have a really hard time transitioning youth players into senior players
- difficult for Canadian players to get pro contracts in Europe and SANZAAR competitions
- MLR is another option for placing players in a professional environment
- Jones isn't a great tactical coach (just watch Canada's loss to Russia in 2018 for confirmation)
- Canada's attack is simplistic and easy to defend
- Canada has some good players Ardron, DTH, Olmstead, Rumball, Blevins, Hearn, etc. (He forgot to mention Phil Mack)
- the downward spiral has a knock on effect as young players are less motivated to play "the pathway game"
- Canada were lucky to qualify this RWC with disqualification of stronger European sides (Russia, Romania, Spain)

- Kieran Crowley wasn't fired, he was offered a contract extension which he turned down since he had found the Treviso job in the meantime.
- "women's rugby in Canada is well funded", true for the women's 7s team, untrue for the women's XVs team
- "Vansen decided not to hire assistants (for Jones) to save money", Jones' mate Henry Paul was hired as assistant.
- Langford (35,000) is actually part of Greater Victoria (370,000) so the population numbers even though small on a world scale, don't quite look as ridiculously small as Langford itself.
- "You find players flitting between the Canada XVs team and the 7s team", it was true, it was becoming less true under 7s coach McGrath, they sacked McGrath and now it looks like it will become true again.

So overall a good depiction of "What Went Wrong with Canadian Rugby" but there's some background missing.

The point made about Vansen using Financial logic instead of Rugby logic is at the core of the problem but it started well before Vansen. It started with the previous CEO, Graham Brown, hired in May 2002 from the Ontario Minor Hockey Association (leaving in 2015). Previous to that Rugby Canada operated out of a small office in the nation's capital, Ottawa. Seven full time employees kept Rugby Canada operating with the focus on rugby (there was no CEO just a COO). This was between the 1999 RWC and the 2003 RWC and Canada were maintaining their ranking as a country just outside the top 10, 13th when the iRB started keeping track in 2003. Brown closed down the Ottawa office and moved HQ to his home town of Richmond Hill, Ontario, just outside of Toronto. By the time his tenure had ended there were close to 50 full time employees with a salary/benefits cost of $1.4 million. The last figure in 2017 has the salary/benefits at $1.6 million, in 2017 Rugby Canada operated at a deficit of $389,142 (of which $196,000 was severance pay and restructuring costs). The union hasn't released the 2018 figures yet. The bottom line is that the organization has become more focused on maintaining financials to maintain the payroll than they have on rugby and it's becoming more evident as the video points out. Vansen is trying to tame the financial beast he inherited from Brown. Rugby Canada has limited income, the biggest single sources are the $2+ million from World Rugby and the 2+ million from the government of Canada. The Vancouver 7s in recent years has added to the coffers. Canada at the time of writing are 21st in the men's rankings, in between Russia and Portugal.

Some of Rugby Canada's financial woes have been of their own doing and based on poor decision making, this has effected their rugby continuity as well. Consider the events from 2015, Mike Chu resigns as GM and Jim Dixon is appointed, without process, it's still a mystery who made the decision. Graham Brown was still CEO and Tim Powers Pat Aldous Chair of the Board. Dixon was fired in 2017 when Allen Vansen was CEO, Dustin Hopkins was made interim GM and remains there to this day. After Crowley quit in January 2016, Francois Ratier, the women's head coach, was made interim men's head coach and led the national team to its best finish in the Americas Rugby Championship coming 3rd behind Argentina and USA but ahead of Uruguay, Brazil and Chile. In 2017 Canada came 5th under Anscombe and in 2018 4th under Jones and in 2019 5th under Jones. The obvious question is why didn't Rugby Canada stay with Ratier as men's head coach instead of hiring Anscombe and Jones which must have cost the cash-strapped organization a pile of money, and would the consistency of Ratier (who brought in Jamie Cudmore as forwards coach) taken Canada past Uruguay in the RWC qualifier, saving all that money in going to the repechage? Instead Rugby Canada offered Ratier the position of coach of a non-existent "centralized program", he stayed in Langford for several months, saw it wasn't working and went back to Quebec to head Rugby Quebec where he is flourishing. The presence of Jones then went on to cause issues with the 7s program and Damian McGrath, the only coach to lead Canada to a World Series win in Singapore, was sacked and Jones assistant, Henry Paul, given the 7s program.

So basically when the video says "decisions came right from the top" and we don't know if that's the top of Rugby Canada or World Rugby, they're mad as hatters at the top and have made some awful decisions that have hurt Canadian rugby financially and in terms of rugby continuity and consistency. No wonder Canada men have fallen to 21st, while the women's programs distanced from the mad politics of World Rugby money, have flourished. The women's 7s well funded by Own the Podium program have had the consistent, long term coaching leadership of former Canada player John Tait. No need to parachute in a coaching "expert" from elsewhere. The women's XVs program has done amazingly well considering they get virtually no funding from Rugby Canada and World Rugby, they have a fund setup with the Canadian Rugby Foundation which relies on donations from the Canadian rugby community. They have had some excellent Canadian coaches including Ric Suggitt, Francois Ratier and now Sandro Fiorino.

Here are some graphs that depict the rapid decline of the Canadian men's XVs team in relation to USA Rugby during Crowley's second term. This can't be attributed solely to Crowley but to the events that were happening behind the scenes as well, some of them described above. It's the result of decades of neglect and poor leadership focused on the financials instead of the product, rugby. 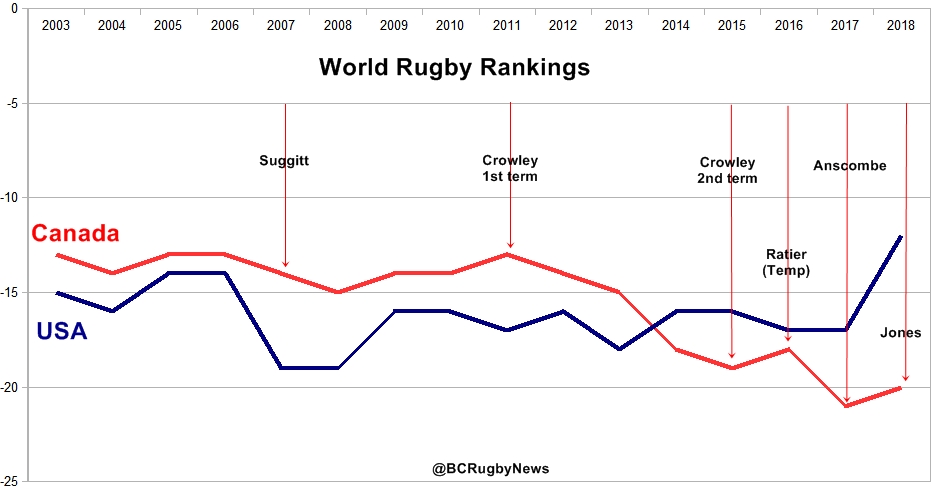 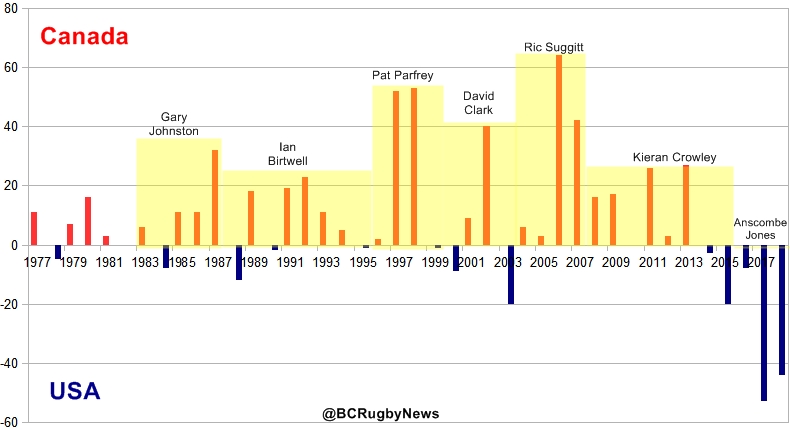 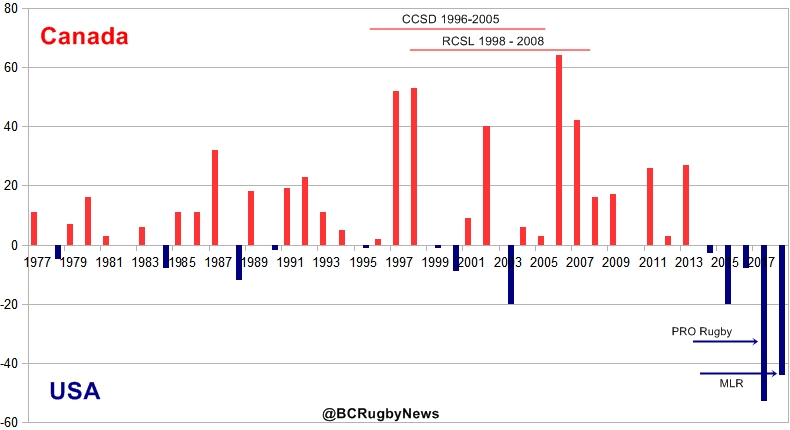