After going 0-3 on Day 1, Canada turned it around completely on Day 2 to go 3-0 and win the Challenge Trophy for 9th place. The tournament will be remembered as Josiah Morra's breakout performance, where he went from 13th man to a legitimate contender for a starting 12 position. He scored 6 tries in the tournament including a hatrick against England. Cooper Coats also did well and played his way into the starting scrum-half position scoring his first series try in the process. Next up is the RAN tournament in July in the Cayman Islands which will serve as the North American Olympic qualifier. The USA won't be present as they automatically qualify finishing 2nd in the series. With Morra and Coats upping their games this weekend it will be interesting to see the 12 selected for the RAN tournament. Connor Braid, Justin Douglas, Cole Davis, Pat Kay will be players looking to get back in the match day 12 if healthy.

Fiji won the tournament and the World Sevens Series, USA were 2nd, NZ 3rd and South Africa 4th, all four teams qualify for the Olympics. Japan were relegated to be replaced by Ireland next season. Canada maintained their 11th place ranking.

Cooper Coats got the start this match, replacing Luke McCloskey at scrum half. Wales scored first when Mullins was beaten one on one on the outside. Andrew Coe answered back for Canada and Hirayama bounced the conversion off the post and in, 7-7. Hirayama took on the line and used a dummy to get through and legged it the length of the field to put Canada ahead. Wales scored at the half time whistle but the conversion was wide, 14-12 Canada. Josiah Morra came in to start the second half playing outside Nathan Hirayama. Canada scored first with a storming run by Mullins as he fended off two defenders, 19-12 Canada. Wales picked up a yellow on a high tackle on Jake Thiel. Canada immediately made them pay with a strong run by Zaruba and Jones took the ball from the breakdown and dove over the line, 24-12 Canada. Wales flubbed a lineout inside their 22, Berna picked up the ball and ran it in, 31-12 to finish the match.

Canada went ahead early with tries by Fuailefau and Morra, England hit back with two tries both converted for a 14-10 lead with a minute left in the half. Canada scored two tries in that minute, the first by Berna off a determined run from the kickoff and Morra scoring his second from an offload by Jake Thiel, 22-14 at the half. Canada started the second half well with Zaruba making a strong run, offloading to Morra who fired an inside pass to the supporting Cooper Coats for his first series try, 29-14. England closed the gap when the scrum half took the ball at the back of the scrum, went blindside and beat the cover, 29-21. England received a yellow for knocking down a pass, Canada took it quickly, Fuailefau to Morra again for his hatrick, 34-21. England again closed the gap with a converted try 34-28 with 10 seconds remaining. England put the kickoff into touch and Canada just had to tap and kick it out for the win, however Harry Jones tapped and passed to Hirayama who kept the match going much to the announcer's amazement. The display of confidence paid off with a final pass sending Jake Thiel over for the try and a 41-28 win.

Canada scored within the first 30 seconds after Ireland fumbled the kickoff, Fuailefau alone out wide was the recipient of a Jones pass to go in uncontested, 7-0. Ireland got one back, 7-5, before Hirayama, Mullins, Jones teamed up down the sideline with Jones legging it in from half way, 14-5. An alert Morra scored off the kickoff, at first glance it looked like a Canadian knock on but the ball went backward off an Irish hand and Morra jumped on it to score, 21-5. Canada almost scored another before half but Fuailefau couldn't hold onto a Hirayama pass with the line beckoning, 21-5 at the half. Ireland scored first in the second half after Hirayama running out of options inside the 22 hoofed the ball downfield, Ireland returned the ball and after several phases found an open man, 21-12 with 3 minutes left. Both teams were running on fumes now and as the announcer noted, it was becoming an arm wrestle. Cooper Coats had a nice steal at the breakdown that prevented Ireland from closing the gap, there was just over a minute left. Zaruba finished off the scoring getting the ball in space out wide and beating the last tackler, final 28-12.

Samoa scored first, a missed tackle by McCloskey gave the line break and good support by Samoa as Harry Jones was the only player tracking back. Canada responded with a good phase of possession, they were awarded a penalty inside Samoa's 22 and from a set play Mike Fuailefau went over. Andrew Coe scored Canada's next try, he showed some good footwork weaving and ducking past several attempted tackles to cross the line. It went into the half Canada ahead 12-7. Canada were slowly building their attack maintaining possession but a poor pass from Fuailefau to Kaay was dropped and Samoa got the ball. Jones had to come off for an HIA. Andrew Coe tried some razzle dazzle inside his 22 with a no look pass to McCloskey, it didn't work, Samoa said thanks for the 7s points. Canada battled back Berna made a strong break, Hirayama on his shoulder, just needed a soft touch on the pass but Berna sent a bullet, another unforced error. Coe scored his second taking a nice line off Kaay who offloaded in contact. Canada were ahead by five 19-14 with 2 minutes left. Samoa took possession from the kickoff and scored, it's the manner of the score that's heartbreaking. The Samoan runner went openside encountered a tackler, looped back, wasn't chased, ran past another potential tackler, wasn't chased, found space on the blindside as the player at the breakdown was slow to get up. If you wanted to condense the whole series for Canada down to 10 seconds and show what's wrong, this would be the clip. No matter how good Canada are on attack if they play defence like this they'll struggle to beat better teams. This is the small difference between going to the Cup round or being regulars in the Challenge round.

Canada opened with a yellow card to Coe as he had to clean up from Isaac Kaay's missed tackle and he went high on the Spanish player, who in true Spanish soccer fashion milked it for all it was worth. Phil Berna picked up another yellow for making his tackle with too much enthusiasm as he picked the player up and dropped him, Canada were down to 5 men. Spain went up 5-0 then 12-0. Spain got a yellow and 3 minutes hadn't gone by yet. Canada scored with the man advantage, Hirayama crossing the line 12-7 for Spain at the half. Spain started the second half with a yellow, a high tackle and the 4th yellow card of the match. Off the set play McCloskey decided to take the ball into two defenders with 3 players outside of him and the man advantage, Spain won the ball on the penalty. Spain scored down a man and went up 19-7 with four minutes left. Zaruba got one back for Canada 19-12. Spain finished the scoring from a chip and chase with Canada's sweeper MIA, 24-12 final. Ironic that with the talk of youth progression in Canadian 7s it was an 18 year old from Spain who scored their last try, Juan Martinez. Canada are out of the Cup round and face USA next. Josiah Morra scored a consolation try for Canada at the whistle. He's been brought on as the 13th man with Admir Cejvanovic missing from the match day 12.

Morra started where he finished off in the last match and took the kickoff and ran it in for a score within 12 seconds. USA answered back with two tries including a walk over by Carlin Isles, 12-5 HT. In the second half the teams exchanged tries, 19-12, and Morra picked up a yellow for taking a player out in the air. USA scored with the man advantage 26-12 and that's how the match ended. Canada take on Wales in the Challenge QF tomorrow. Wales and Japan are battling it out for relegation with Wales 5 points ahead. Kenya made the Cup round which has guaranteed their position in next year's series.


Braid and Douglas Out: Cooper Coats Brought in as 12th Man

The injuries picked up by Justin Douglas and Connor Braid in London have kept them out of the Paris 7s. There's no word from Rugby Canada on how serious these injuries are but Braid had his arm in a sling and Douglas left the field limping.

Cooper Coats gets his second 7s cap and is listed in the playing 12, Josiah Morrah is listed as the 13th man.

Canada's Cup round hopes will be decided early in the tournament versus Samoa, win that and Canada likely will make the Cup round, a loss against Samoa will probably mean a Challenge round tournament for Canada. Canada's second game will be against Spain, their easiest match and they finish against USA who are battling Fiji for the overall series title.

Canada will be eyeing the RAN tournament in July which will be the Olympic qualifier. Their main competition there will likely be Jamaica who won the tournament last year. 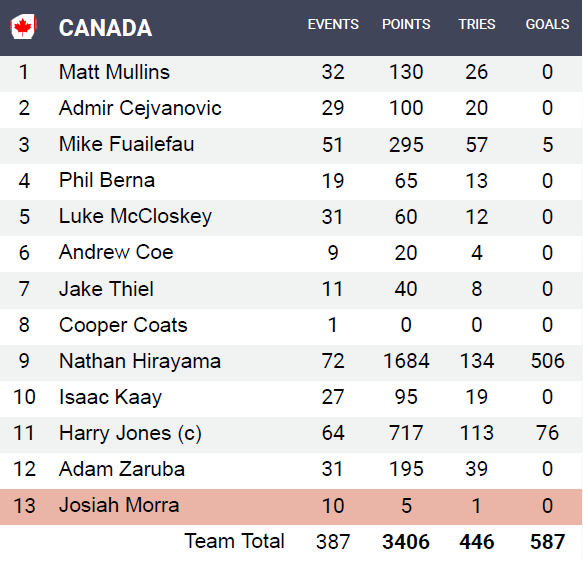