The match reports from Rugby Canada and England Rugby are pasted below for the match details. The result shows Canada are competitive with the top teams midway into the World Cup cycle. They lost to #1 NZ and #2 England by narrow margins, they defeated #3 France who defeated NZ at the tournament, so it's looking positive.

Canada were unlucky not to win the match, a few calls here and there that didn't go their way, like the last yellow card when the ref was adamant that the maul didn't break off but as the photo below shows, it did break apart before Sara Svoboda engaged. Really the difference was the replacement engine room, the replacement props and second row couldn't match what England put on the field in the latter part of the match. Coach Fiorino changed out 1, 3, 4 and 5 at the 47 minute mark with Canada ahead 12-0 and it proved to be a disaster. The England scrum in the second half of the match set the tone for the comeback, it's something the Canada coaching staff will have to address, building more depth at those key positions. 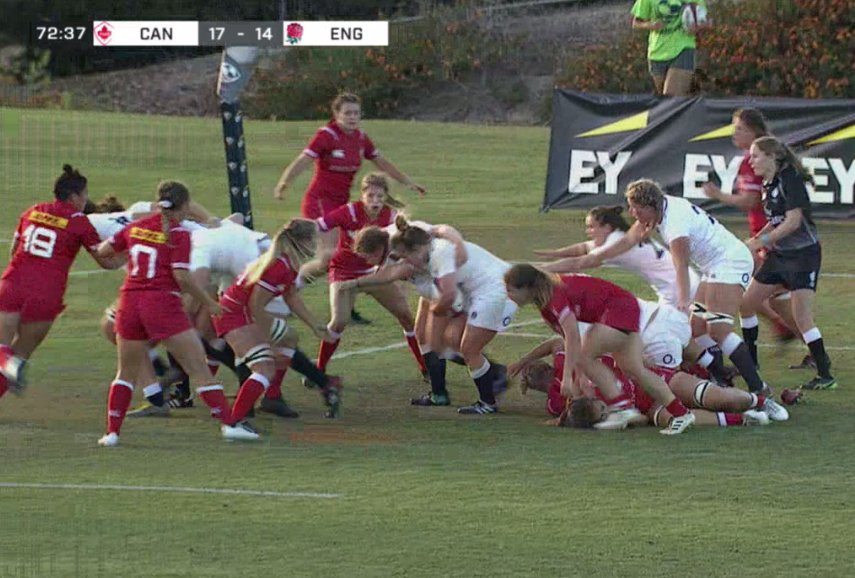 England steal game three of the Women's Rugby Super Series from Canada with a late-game surge, taking it 19-17 on Saturday, July 6.

The third match of the Super Series was an all out battle with England’s line holding strong and Canada putting on relentless pressure at the breakdown to start things off. Canada’s resilience was rewarded after a TMO decision gave Tyson Beukeboom the lone try of the first half.

Canada got off to a rocky start in the second half with Gabby Senft picking up a yellow card. They bounced back quickly though with Elissa Alarie weaving her way through the English defense and popping the ball inside to Paige Farries who burned it down for the try. Brianna Miller added the kick to put Canada up 12-0. An infringement off the scrum by Canada awarded England the penalty try to shift momentum in the Roses favour.

Canada took one back, smashing at the line before moving the ball out wide to Farries for her second of the game. England’s forward pack proved too much for Canada, dominating at the set piece and maul to take control late in the game. A yellow card to Sara Svoboda and another score secured the win for the Red Roses, 19-17.

Canada will face historic rivals USA for their last match of the Super Series on Wednesday, July 6th. Kick off is at 8:15pm ET/ 5:15pm PT and can be streamed LIVE on FloRugby.

After opening with a 38-5 victory over USA Women in round one, England faced a real physical test against Canada who came into the match off the back of a win over France – who themselves earlier in the day beat world number one ranked New Zealand in round three of the Super Series.

It was a tight opening quarter with no scoring in the first 20 minute, but it was the Canadians who got the first try when a series of pick and drives saw Tyson Beaukeboom go over. Those were the only points of the first 40 minutes encapsulating the tight encounter as Canada led 0-5.

Minutes into the second half, Canada were down to 14 players as Gabby Senft was sent to the sin bin for her off the ball challenge on Amber Reed, but a breakaway saw wing Paige Farries race in from her own half for a second try for the North Americans.

After a driving lineout maul by England was held up, from the resulting five-metre scrum a superb nudge by the forwards in white saw them awarded them a penalty try.

It was two tries in two minutes for the Red Roses as they took the lead for the first time when a slick backs move was worked to Kelly Smith who avoided two tacklers from inside her own half to race away – her second try of the tournament.

Canada responded when they worked the ball to the right wing for Farries to cross for her second, before Abbie Scott was sent to the sin bin for an accumulation of penalties by England.

England though were winning a number of scrum penalties in the second half as their finishers made an impact and put real pressure on the Canada line, which eventually saw Sara Svoboda sent to the bin following a cynical challenge with seven minutes remaining.

From that penalty it was another powerful scrum from five metres out that saw Sarah Hunter dot down off the back of it, but the missed conversion saw it sit 19-17 to England with five minutes to go where they held on for a narrow win.

The victory is England’s seventh in a row against the Canadians and they will next play France on Wednesday 10 July and then end the tournament against the world’s number one ranked side New Zealand on Sunday 14 July, with both matches available on Sky Sports.

The starting roster tomorrow is a variation from the first two matches. Sophie de Goede looks as if she's cemented her claim to the #8 jersey getting the start again. Gabrielle Senft who started at #8 against NZ comes back into the roster as blindside flanker. Fabiola Forteza who started the first two matches as flanker gets a rest this match with Janna Slevinsky getting the start at openside. The starting props remain the same with DeMerchant and Menin getting the call and Laura Russell reclaims the captaincy and starting hooker role. Gillian Boag backs up Russell at hooker and Laliberte and Harrigan are the reserve props. Tyson Beukeboom and Jacey Grusnick maintain their second row starting roles from the France match.

Taylor Black retains her #10 spot from the France match and Miller and Josephson again reverse the starting order with Miller getting the start this match. Sevens player Sara Kaljuvee comes back into the roster at #12 and Alex Tessier moves from inside to outside centre. She started at #10 against NZ, #12 against France and is slowly moving her way to the outside. Ellisa Alarie remains at fullback and Paige Farries retains her wing spot. Alysha Corrigan gets her first start on the other wing.

The match kicks off at 5:15pm PT. Canada are 1-1 and England are 1-0 having beaten the USA but having a bye last match day. 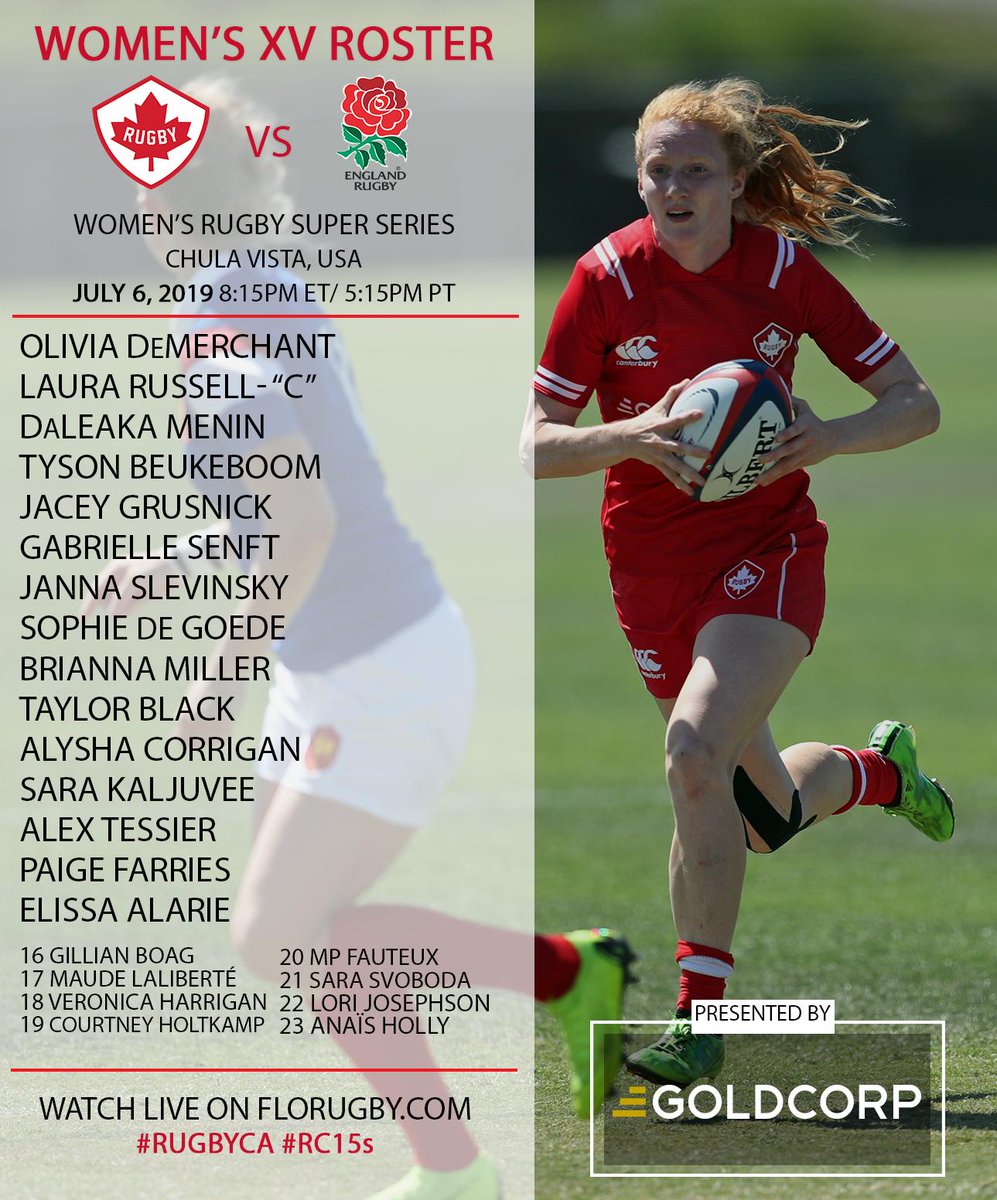