BC have won the first two national club championships, last year the Ravens won the men's title in Vancouver, this year Capilano won the women's title in Toronto. It's an indication that some of the best club rugby in Canada is played on the west coast in the BC Premier leagues.

The Quebec City club (CRQ) came second and trounced the Ontario champion, Toronto Saracens, 62-0 in the semi-final match. Talking to Francois Ratier, the Director of Rugby in the province, he indicated Quebec City has a strong high school, cegep and university system to support women's rugby. Kevin Rouet and François Vachon-Marceau who are coaching the club side are also coaching the Provincial program and coach at Laval University. Quebec play an expansive, fast paced game but Capilano excelled in the physical aspect of the game and setup their attack through strong forwards play. Macy Munson in the centres put in a strong performance as usual.

Even though the forwards created the platform for the win, four of the five tries were from the backs, scoring were winger Heather Muir, fullback Ashley Robinson, inside centre Macy Munson, front row Demi Stamatakis, and outside centre Ella Marwick.

The full match replay is below.

Toronto Saracens won the bronze match with a slender 15-14 win over Charlottetown.

The finals are set for Sunday, for Gold it will be CRQ vs Capilano and in the Bronze Saracens v Charlottetown.

For Capilano Macy Munson and Andrea Burk were standouts, Burk scoring the first try and Munson adding a few more including a great solo effort. It was 10-0 at the half and still a close game with only Burk's try and Munson's penalty and conversion on the scoreboard. Macy Munson scored first in the second half and converted 17-0. Charlottetown responded 17-7. Munson scored again and converted for a 24-7 scoreline with 30 minutes left. Munson scored her third try after a turnover when she found the blindside unguarded, 29-7. Caps scored another on the wing 34-7. From the kickoff Demi Stamatakis, off the bench, had a good run and setup Gillian Boag for the try, 39-7. Charlottetown crossed the line one more time 39-14 is the final.

CRQ were up 21-0 before the live stream even kicked in with 20 minutes missing. It just continued on from there eventually ending at 62-0 and shocking the host Toronto Saracens. CRQ looked very impressive, they play a high tempo, expansive game. Their 1 to 15 can handle the ball and their offloading skills are top level.

The inaugural women's Canadian Rugby Club Championship #CRCC2019 is set to kickoff from Fletcher's Field in Markham, Ontario. BC are represented by BC Premier champions Capilano, they face off against Atlantic champion Charlottetown RFC. Two players to watch Macy Munson from Caps at inside centre and for Charlottetown Alysha Corrigan at #13 recently returned from a stint with the Canadian women at the Super Series in San Diego. 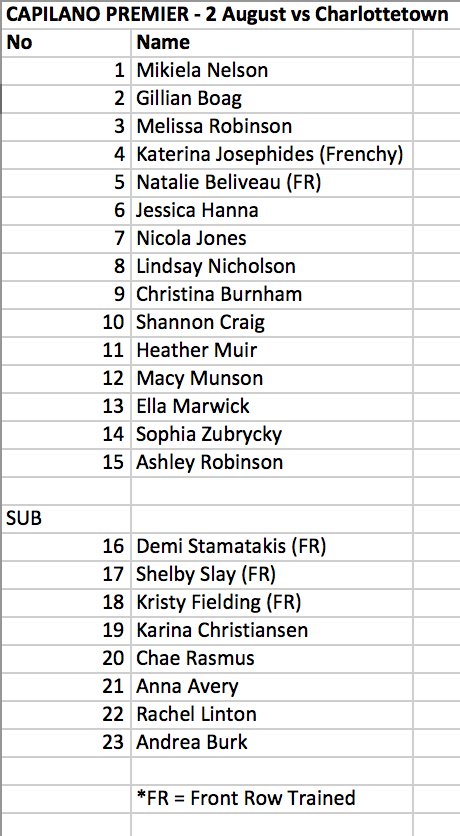 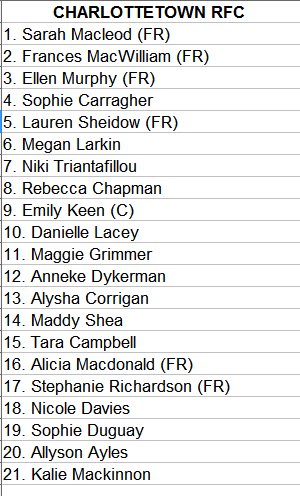 Last year was the men's inaugural Canadian Club Championship won by the UBCOB Ravems, this year the tournament moves east and the women will compete for the cup. That's the model, switching men's and women's every year until enough funds are available to host both each year. The tournament is funded every year by the Canadian Rugby Foundation with the addition of local sponsors. This year Bill Webb and the Toronto Arrows have stepped up with sponsorship funding. Mike Holmes and Pemberton Holmes have been sponsors since day one as has Rick Bourne and Langara Fishing Adventures.

We'll post rosters when we get them, so far we've just seen the Club de Rugby de Quebec roster. Also visit the official website canadianclubchampionship.com and their FB page /CanadianRugbyClubChampionship 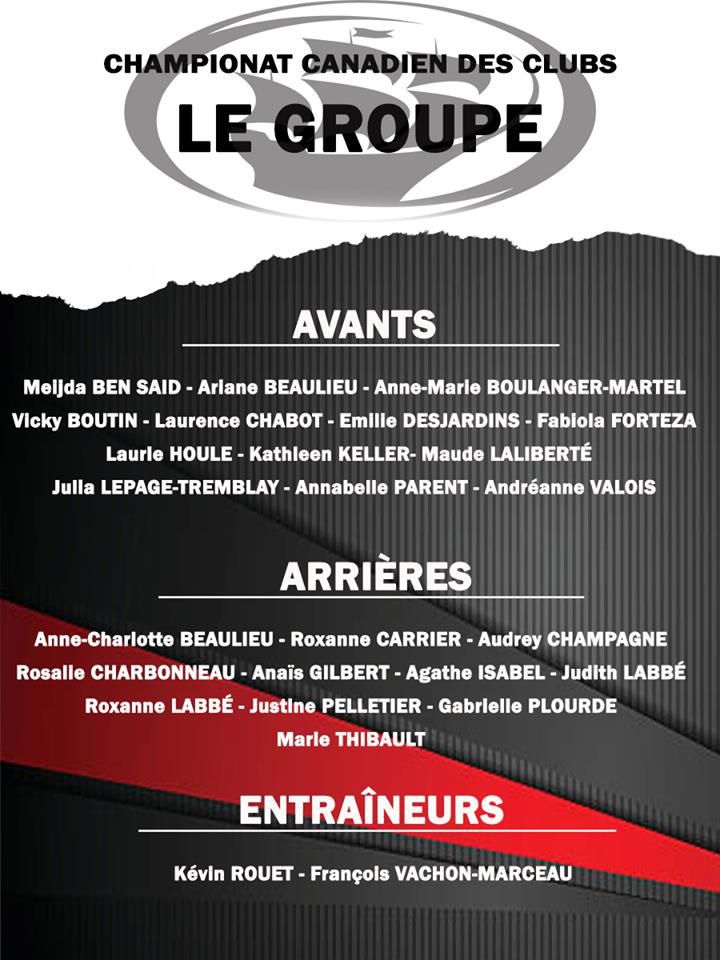 The first ever Canadian Women’s Rugby Club Championships are taking place next weekend at Fletcher’s Fields in Toronto. Following on the success of the Men’s version at Capilano Rugby Club , Davine Burton , Chair, and her Committee, have been putting the final touches towards the preparation for the tournament.

Due to the unavailability of various players, the prairie contenders were unable to commit to attend the final four and Charlottetown R.F.C. and Club de Rugby de Quebec were granted the final two spots without having to play their quarterfinal match.

The home team, Toronto Saracens, have stepped up to the task at hand and Barb Dinardo and Chris Rideout have been keen to make sure the visiting teams feel welcomed.

Athough the B.C. Capilanos have been afforded the number one seed by the Committee, given the talent in all squads, it will likely come down to the wire.

Capilanos knocked off the reigning B.C. champions and unbeaten season record holders, Westshore Valkyries, by one point in the B.C. finals in May in a tough physical contest. They play number four seed Charlottetown R.F.C. from the capital city of our smallest province, in the first semifinal match of the tournament on Friday August 2nd at 5:00p.m. Charlottetown looks to record the first “upset” of the tournament with a victory over Capilanos.

Toronto Saracens are currently leading their league and won the OWL last year. Club de Rugby de Quebec had 9 of their women in Quebec’s winning team at the C.R.C.’s this year, so are looking to prove the Committee wrong. Toronto and Quebec, ranked 2nd and 3rd, will face each other in the 2nd semifinal match of the tournament – in a battle of the east – on Friday August 2nd at 7:00p.m.

All eastern teams have the advantage of being match fit though tempered by the lateness of the season and the unavailability of certain players due to injury.

“We are looking forward to a great event and the first chance for Women’s Club Rugby, the grassroots of Canadian Women’s Rugby, to shine, and for the best team in the country to be crowned”, stated Chair Davine Burton.

National Club Championship in Toronto in August; Women to Compete in Year Two for de Goede and Parfrey Cup

Last year was the first year of the Canadian Rugby Foundation funded Canadian Club Championship. It was won by the UBCOB Ravens men at Klahanie Park. This year the women will compete for the Cup, named after two great rugby families the Parfreys and the de Goedes. The competition moves east to Toronto and will be hosted Aug 2nd and 4th at Fletcher's Field.

The North Shore News wrote an article about the Capilano preparation for the tournament and their fundraising activities to get the team to Toronto.

Mike Holmes, the Chair of the Canadian Rugby Foundation, had this to say about the naming of the Cup representing the national club championship, "It is a fitting tribute to the contributions of the de Goedes and the Parfreys that this trophy be named after them. Hans de Goede was one of Canada's very best players and his record on the field is well known. Off the field he and his wife, former International Stephanie White, have been coaches, fundraisers and administrators at various levels including directors of Rugby Canada. In a similar vein, in addition to his duties as past Rugby Canada President, World Rugby Representative, Canadian Coach and Canadian Rugby Foundation director and U20 committee member, Dr. Pat Parfrey has been one of the key drivers and funders of Newfoundland Club Rugby and a visionary behind the concept of the Canadian Club Championships. We hope that this Cup will remind Canadians in years to come of the true Rugby spirit of these two great families."

Score updates and further information can be found on the tournament website, canadianclubchampionship.com