BC Bears Dominate in 54-12 Win to Claim Best of the West Title: MATCH VIDEO

It didn't start well for the Bears as the Wolf Pack who had a +32 to start added an early try to go up +39 with 6 minutes gone. Spencer Jones the Toronto Arrows backline player sent a perfect pass out to Kyle Morrison who was lurking on the wing and it was looking dire early on.

It didn't take long for BC to get back in the game however a nice chip kick kept pressure inside the Wolf Pack 22 and Travis Larsen bulled his way over, 7-7 with 8 minutes gone.

McLelland and Staller were looking a dangerous combination early on, working well together and finding lots of space. Knock ons prevented the Bears from adding to the tally a couple of times.

BC were applying pressure inside the Wolf Pack 22 with Travis Larsen aggressive with the short carries, Reid Watkins at scrum half saw an opportunity from the ruck and stretched his arms over the line and Bears were ahead for the first time, 14-7 with a quarter of the match gone.

At 27 minutes Staller came in from his wing and with a nice decoy run by Nieuwenhuysen, Gillies feathered the pass to the charging winger and Staller was under the posts, 21-7. The addition of Gillies at flyhalf, Staller on the wing and McLelland at fullback would make a big difference from Game #1.

At 30 minutes Wolf Pack clawed one back on the outside, again set up by a pass from Toronto Arrows Spencer Jones, 21-12.

MClelland was putting on a show and seemingly at will he was able to weave through the Wolf Pack defence, again the final pass went to ground relieving the pressure but the potential for points was there with a little more accuracy, the half ended at 21-12.

The subs came on, Chris Taylor and Noah Barker as new props and Jorden Sandover-Best at scrum half they immediately made their impact felt as the new front row destroyed the Wolf Pack scrum and then Sandover-Best tapped from the penalty and eventually found his way over the line, the tempo had been raised and BC were ahead now 28-12 just a few minutes into the second half. Still another 16 points to make up on the Wolf Pack on aggregate.

Two minutes later BC were again under the posts with the backline clicking Nieuwenhuysen, Colby Mason and it looked like McLelland taking the final pass, 35-12 with still 35 minutes to play.

At the 55 minute mark an innocent looking grubber by Gillies was chased down by McLelland for a try. The camera missed it, the camera work was about the only part of the BC game today that was sub par, the announcers were excellent though and they described the play, 40-12 now. It was only +4 for the Wolf Pack now on aggregate and it was slipping away quickly.

At 61 minutes BC got another try off a strong scrum, Barker and Taylor have had an impact since they came on. Guiseppe du Toit who had replaced Nieuwenhuysen at inside centre made a strong run off the ruck and found the corner, 47-12, and now BC are ahead on aggregate for the first time.

Blake Mahovic from Squamish got the last score as he came on as replacement fullback as Gillies went off injured and McLelland moved to flyalf. Guiseppe du Toit hit the conversion and that's the final scoring with the last 10 minutes just game management by the Bears. They win by +42 and +10 on aggregate.

Coach James Thompson announced his starting lineup for today's match. Aaron McLelland will feature at fullback, Travis Larsen comes in at #8 with Stephen Gillies taking the pivotal flyhalf role. Brock Staller gets the start on the wing. A strong bench with Chris Taylor and Noah Barker the replacement props, Jorden Sandover-Best replacement scrum half and Guiseppe du Toit as replacement backline player.

The Wolf Pack have brought in some reinforcements as well, a few current and former Westshore players feature. Cole Mosychuk from Kelowna will come off the bench at openside, Spencer Jones who came to Westshore from NZ, then to the Toronto Arrows will feature at wing, Thomas Isherwood who played fullback at Westshore and for the Canada U20 side with get the start at outside centre, Brock Gallagher also played for Westshore and starts at #9. Andrew Ferguson who plays scrum half for the Toronto Arrows will try his hand at openside today. Ryan Ackerman the capped Burnaby player will get the start at loosehead. 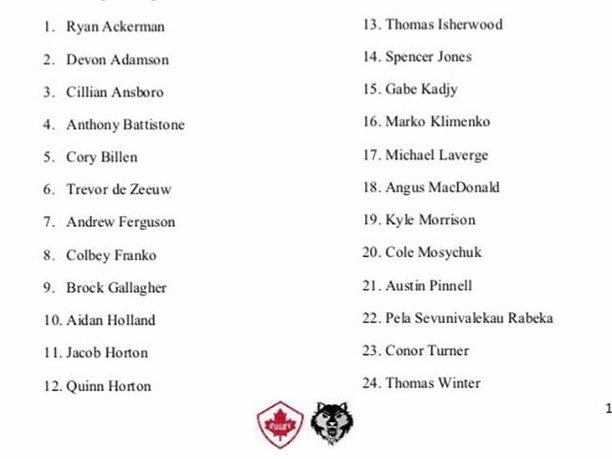 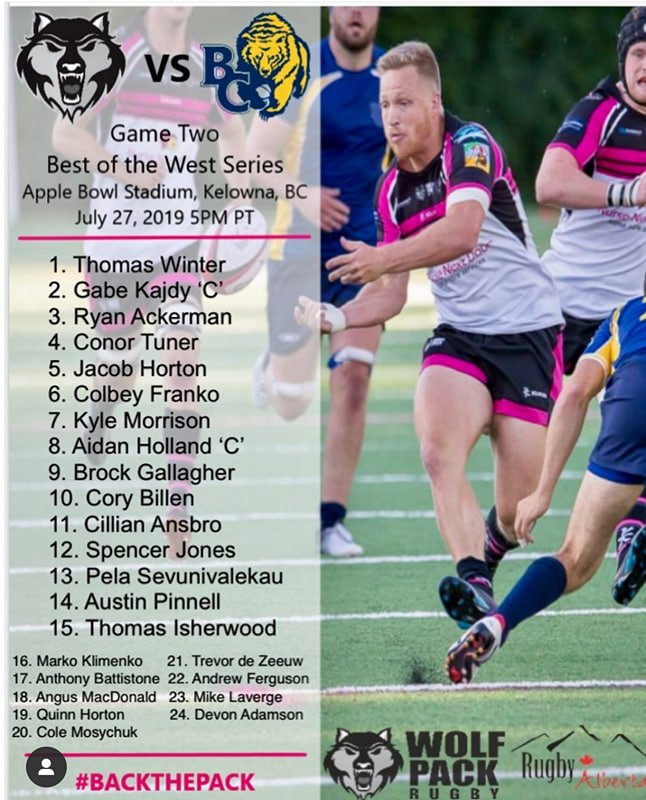 This looks a lot stronger side for BC compared to the one that travelled to Alberta in June. Eleven new faces include four players from different MLR teams, Brock Staller from the Seawolves, Guiseppe du Toit from the Toronto Arrows, Travis Larsen from Austin Elite and Noah Barker from Glendale Raptors. The top attacking backline player from the BC Premier, Aaron McLelland, takes a break from summer 7s to join the squad. Chris Taylor voted top tighthead in the BCRN Premier poll also joins the team. Two other players rated highly in that poll join the squad, Jorden Sandover-Best at #9 from the Ravens and #10 Stephen Gillies who developed his rugby skills in Scotland and currently plays with Nanaimo.

Whether the team will be good enough to erase the -32 deficit they find themselves in or not remains to be seen but they should be a lot more competitive and we'll go out on the limb and say BC for the win in this match. It's the beginning of a good lineup to put out against Canada in August.

Kickoff is 5pm PT and hopefully the stream will be of good quality from the Apple Bowl in Kelowna. Starting lineup to be announced on Friday.