Canada Defeated by England in Second Match of Tri-Nations Cup

The squad assembled on Tuesday to prepare for the tournament at Loughborough University.

England led 7-0 at the break against Canada via Jodie Mallard’s try and a Lucie Skuse conversion.

Canada themselves then led 15-7 through tries from Emma Feldinger, Lizzie Gibson as well as Shoshana Seumanutafa's penalty, however tries from Ebony Jefferies, Holly Cunningham and Jessica Thomas won the game for England.

The opening scored came via Mallard who burst through the pack of Canada to cross before relentless pressure after half-time saw Feldinger cross for the visitors.

Gibson scored a second Canada try with a Seumanutafa penalty giving them an eight-point lead.

Jefferies’ try and a Skuse conversion reduced that deficit to a point while Cunningham finished a hard-fought and well worked try.

And late on Thomas sealed victory, touching down in the corner for a 24-15 win.

England Women U20s head coach Jo Yapp said: “Overall the tournament has been brilliant for the players' development, being in this environment over two weeks and being able to play two games and back up those two games is a really important part of their learning so as a whole it's been really important. You can see that in the way the girls have come together.

“In terms of this particular game, we knew Canada was going to be a tough encounter and that they are a strong and physical side. It was everything we expected it to be, we didn't make it easy for ourselves at times and made quite a lot of mistakes but what we're really proud of is the mental resilience that the players' had, even when we went down on the scoresheet to come back and show belief we could turn it around is something we're very happy with.”

"We certainly gained some positives from the USA game and to regain the Can-Am is always special for our athletes.The players have really worked hard while in camp, have challenged us as a staff and each other as players," said head coach Jack Hanratty.

"Playing against a top nation like England is exactly the preparation that we need as we develop our athletes into the senior women’s program. We understand the massive challenge ahead of us but are excited about the opportunity."

Sunday's match will be available for streaming pending any weather disruptions on the day on OnPoint Performance Analysis Facebook page.

Canada Defeat USA 24-7: Next Up England on Sunday

Canada got first half tries from fullback Brogan Mior and wing Angie Olukumni with a conversion by centre Shoshanah Seumanutafa for a 12-7 HT lead. Canada added two more second half tries by openside flanker Lizzie Gibson and replacement Noemie Tremblay with one conversion successful

Coach Jack Hanratty's post match comments are below. Canada will have a stiffer test on Sunday when they match up against hosts England.

Canada get their first match on Wednesday against USA. USA received a wake up call from the hosts England in their first match 62-0. It's likely England will be the top team in the competition and the Canada v USA match should give an indication of how Canada will stack up against them on Sunday.

UBC are well represented with 6 players on the squad, interesting to see Rori Wood moved from her usual second row / #8 role to prop for this tour. There's no live stream, hopefully Rugby Canada will make the match video available for later viewing. 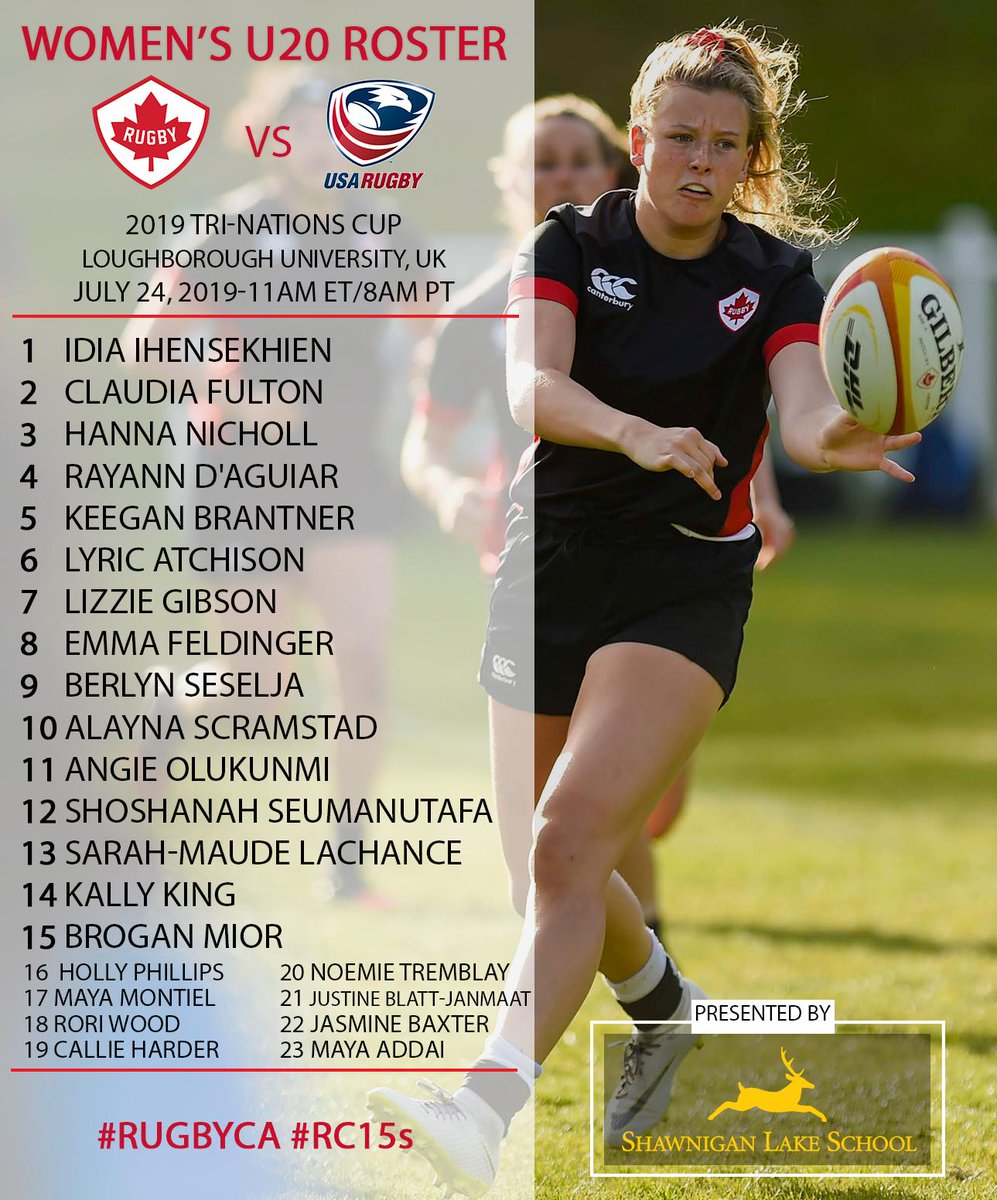 Canada’s Women’s Under-20 head coach Jack Hanratty has set his roster that will travel to England to compete in the Tri-Nations Cup from July 20-28, 2019.

Canada hosted the tournament last year, falling to England in the final match to come second. Hosted at Loughborough University, the Tri-Nations will be the years first international test for the Canadian squad following a training camp last month.

The tournament serves as another talent ID opportunity for the National Senior Women’s team as they work towards the 2021 Women’s Rugby World Cup.

“The U20 age group is a pivotal steppingstone for our national identified athletes, which you can see with the number of graduates currently in the senior women’s squad,” said Hanratty. “We have an incredible amount of talent across the country at this age group and we have identified players from USport, Provincial programs, and sevens academies.”

Canada will be taking on USA on July 24th and England on July 28th. The Tri-Nations Cup will not be broadcast but score updates will be made available on the Rugby Canada website and social platforms.