Canada looked good for the first 5 minutes before a couple of plays that would set the tone of the match. First big openside flanker John Quill for the USA swam through an attacking maul and killed it legally according to the ref, that was a display of forward physicality that Canada would have difficulty matching on the day, Canada should have done better with that field position. Then on the subsequent clearing kick Conor Trainor gave himself a falcon when he went to catch the ball and knocked it forward off his head. Canada would have too many of those moments in this match, self inflicted handling errors. Canada went from an attacking maul inside the USA 22 to defending a scrum inside their 22 in a matter of seconds. USA kept that pressure on, put in multiple phases without error, got a penalty and mauled in a try. They were more clinical and used their power in the forwards to put the first points on the board, 7-0 with 10 minutes gone.

At 13 minutes the USA were again inside the 22, Evan Olmstead made a standout play, jackaling the ball and relieving the pressure. The new flyhalf, Peter Nelson, didn't acquit himself well on one of his first attacking touches, he had Ardron outside him with hands positioned to receive the ball, Nelson hesitated, put his head down and crashed ahead into two tacklers, the ball was stripped and possession was turned over. Fortunately USA returned the error from their attacking position inside the 22 and Canada cleared. USA were playing a smart territory game, playing the game inside Canada's half and waiting for the mistakes. They didn't have to wait long, Piffero threw a crooked ball into the lineout and USA had an attacking scrum at Canada's 22. Again USA graciously returned the error with a forward pass and Canada now had the scrum. Unfortunately Canada were still in the giving mode and Nelson put the clearing kick into touch after it had been passed back into the 22. USA this time converted possession into points with a bit of luck, the ball hitting the corner flag and bounced back in field where it was pounced on for the try, 14-0 with a quarter of the match played.

Canada had the ball inside the USA 10 metres on attack at the 28 minute mark with a chance to get back in the game. Analyzing that play is useful in pointing out where Canada are having problems. Matt Heaton received the ball standing still, the ball was slow and a bit high, the hard charging USA defence smashed Heaton back and counter-rucked to win the ball. Ardron was running a hard line just off Heaton's outside shoulder with hands outstretched waiting for the flick pass, it didn't come - if it had the attack would have continued on the front foot. In that situation you have a Super Rugby player seeing how the play is developing, thinking two touches ahead, and you have a National One level player, 3rd tier UK, having to make that pass under pressure in a fraction of a second, unlikely to happen. The disparity in playing levels is proving difficult to manage for coach Kingsley Jones, and the performance today was an example.

By the 30 minute mark Canada are having no success getting through the USA defence, it results in an aimless grubber kick through the line with no chase which is pounded back inside Canada's half, Parfrey makes a weak clearance kick and Canada go from attack at the USA 22 to defending a lineout at their own 22. At 33 minutes Canada have the beginning of a promising backline attack, Hearn with the ball, Heaton taking the short inside line, Trainor the deeper wide line, if the ball get to Trainor Canada have a 3 on 1 attack. Hearn chooses neither runner and ends up smacking into Heaton and two USA tacklers, Heaton comes out the worst from the collision. It's not a pretty spectacle, the Canada attack, wrong options being chosen, simple plays being botched. Canada put themselves offside in the subsequent melee and USA kick for points, 17-0.

Trainor almost scores a try at the half when he picks up a loose ball and runs it in but on review it's Ben Lesage deemed to have ripped the ball, knocking it forward and Trainor is penalized for being ahead of the ball. Canada are not playing well but the luck of the bounce and the 50/50 calls are not going their way either this match. The half ends 20-0 for the Americans.

Canada's first points come from a solo effort by Tyler Ardron as he steps in front of a pass when USA are spreading it wide and out runs everyone for a 70 metre intercept try, 20-7 with four minutes gone in the second half.

USA starts to up the tempo on attack, Piffero is called for not rolling away, USA take the points, 23-7 with just over 30 minutes to play.

At 57 minutes Canada bring in a new front row, Ilnicki, Quattrin, Brouwer. The first scrum is stable but Hearn knocks the ball on in contact on first phase and USA now have the put in. Canada are penalized for an early push and USA decide to go for the lineout instead of another 3 points. The maul is stopped but poor defence afterwards as USA #4 Ben Landry runs at and over #10 Peter Nelson who can't bring the big man down, 30-7 with 20 minutes left.

Shane O'Leary comes on, Peter Nelson goes to fullback and it looks like Pat Parfrey is off. The changes don't help, USA run in another one a few minutes later. Ben Lesage goes for the intercept, misses and USA bear down on Peter Nelson, now the fullback, on a simple two on one, they execute perfectly and it's 35-0. The announcers start throwing shade on Canada, "what is the strategy that Canada have been playing with tonight?", "Canada look tired" - hard to argue with either observation. At 69 minutes, Canada's maul defence seems to vanish and USA put over another, 40-7.

Canada get a couple of consolation tries with the benches cleared, first a penalty try from the scrum at 76 minutes with Ilnicki on the tighthead side pushing hard, 40-14. Then at 80 minutes as the announcers remark, "finally something goes right" as Conor Trainor comes in off his wing and takes an inside ball for the score. In between USA added an intercept try, the final 47-19. Not a good performance by Canada, looking over the Rugby Canada facebook comments reflects some of the fan reactions, not a lot of positives.

It doesn't get easier for Canada as they head to Fiji to take on Fiji on August 2nd and Tonga on August 8th before they come home for a break and take on Leinster on the 24th in Hamilton, then they get another crack at USA at BC Place on September 7th. In between they have a warmup game versus BC on August 30th.

It's no secret, Canada need a top class #10 to compete with the big boys with the World Cup coming up. Shane O'Leary helped Canada get a good run at the U20 level when they came second at the 2nd Tier U20 championship in 2013, that's one of Canada's best finishes at the JWRT. He's been playing well at Nottingham in the 2nd tier of English rugby but he just hasn't fired up the Canada side when he's had his starts at #10. Pat Parfrey and Gord McRorie, good journeymen #10s who can do the basics, but again just not providing that bit of extra game management, field vision, kicking skills, line breaking dynamic that could set the backline alight. So why not give Peter Nelson the former Ulster player, Canada eligible, a shot at #10 against a tough foe and see what he can do? He's up against AJ McGinty from the Sale Sharks, a perfect case of throw them in the deep end and see if they can swim. Shane O'Leary is on the bench in case it all goes pear shaped in a hurry, hopefully not.

Elsewhere Buydens and Keith at props and without Barkwill in the mix, Piffero goes to the top of the class at hooker with new cap Quattrin as reserve, but where is Eric Howard? Ilnicki and Brouwer as reserve props looking to make a mark in the second 40. Second row, no surprise Evan Olmstead with Conor Keys as partner, Baillie at blindside, Heaton openside and captain Tyler Ardron at #8. With Nakai Penny being overlooked a critical eye will be cast on Heaton's performance to see if he still deserves the starting openside role, Justin Blanchet waits on the bench to make an impact. Luke Campbell also takes a bench role, able to play a number of backrow positions including #8.

Outside DTH and Conor Trainor, no sign of Taylor Paris or Jeff Hassler in the match day 23. Centres Hearn and Ben Lesage with Nick Blevins as replacement. Phil Mack gets the start at scrum half with Gord McRorie as backup.

It looks like coach Kingsley Jones is using the match to test the halfback combinations with both a scrum half and fly half reserve, one centre reserve but none for the back three although McRorie can fit in anywhere.

The USA roster is interesting, seven MLR players in the starting XV but none from 10 to 15, most in the forwards plus the scrum half. There's two 7s players Martin Iosefo who gets the start on wing plus Madison Hughes on the bench.

Kickoff is at 5pm PT. 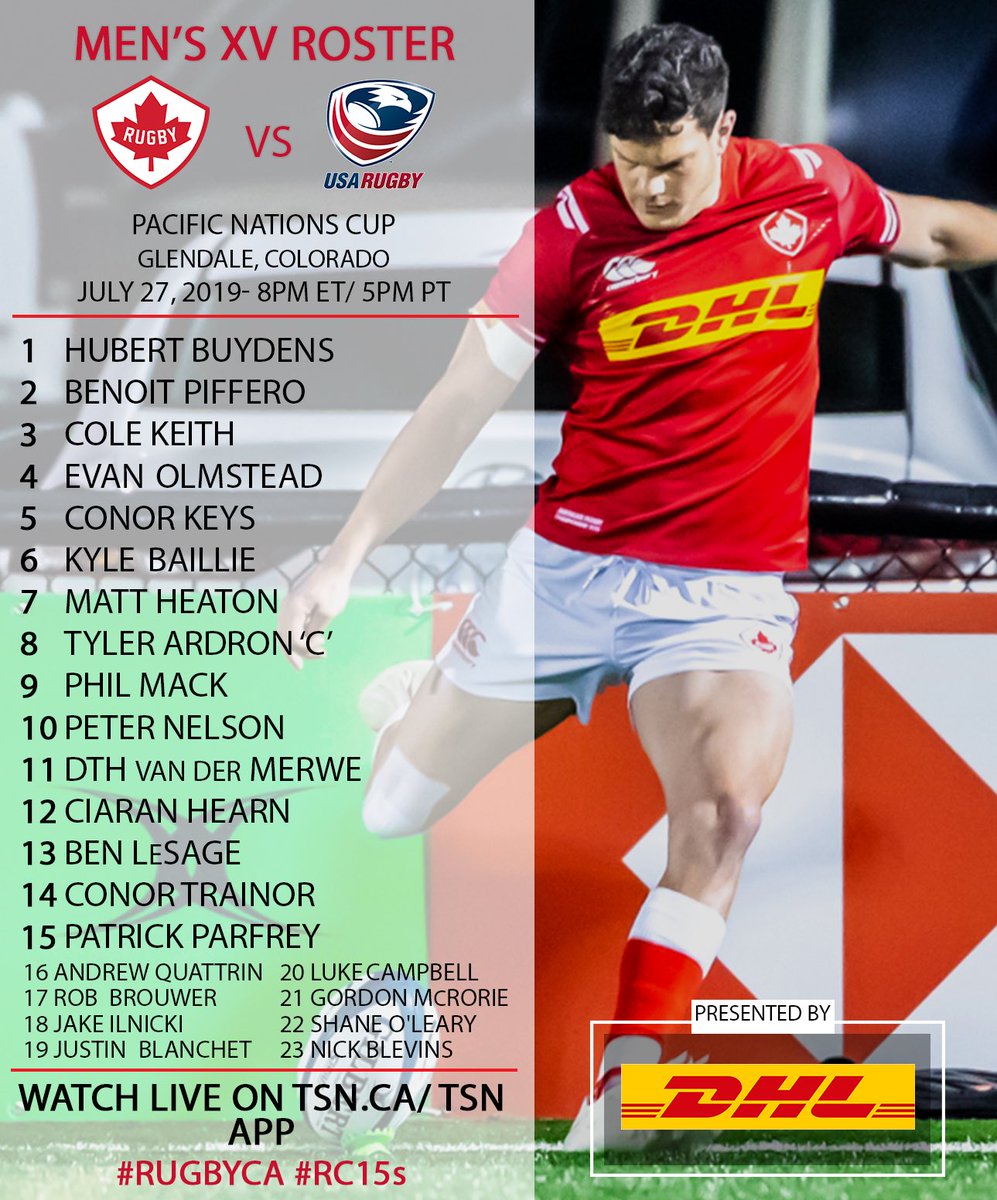