We had said before the match success would probably look like keeping the scoreline within 20 and not losing any players. This result fell outside those parameters, losing by 25 and losing two players, Conor Keys and Justin Blanchet. Blanchet just lasted two minutes before Mike Sheppard had to replace him, it's difficult to see the incident that caused the injury. At 1:33 he made a tackle, putting in a shoulder, and then the next stoppage of play he took a knee and came off.

Canada went ahead 3-0 off an O'Leary penalty, Fiji scored the first of their six tries by #8 Mata. O'Leary kicked another and Canada were ahead 6-5 at the 12 minute mark. The next Fijian try was a bit of a gift from Canada, the Fijian scrum half, Seniloli, timed a perfect run at #8 Luke Campbell and hit him as he lifted the ball off the ground from the base of the scrum. The ball spilled out of Campbell's hands over the try line where Fiji just had to dive on it, 12-6 for Fiji.

At 29 minutes Fiji add a 3rd try as #5 Nakarawa ran over Canadian defenders off a tap penalty. The Fijians were so confident in their ability to score with ball in hand against Canada they didn't even bother with a scrum or lineout from a 5 metre penalty. What set the try up was surprising though, Fiji destroyed two Canada scrums in a row, the first getting a penalty and the other when they pushed Canada off their own ball to gain possession, 19-6 Fiji.

At the 34 minute mark Canada got their one and only try off some sloppy clearance work from Fiji inside their 22. Fiji were show boating a bit trying to run it out of their 22, traditional Fijian rugby, but Blevins stepped inside one of their passes, offloaded to McRorie to Lloyd who powered over. In the second half, presumably after some stern words from their coach, Fiji would fall back to the more traditional exit strategy and kick from inside their 22. Kainoa Lloyd was the one player in the first half who was doing well in the one on one contact area, and he had an earlier line break coming inside from his wing position. At 38 minutes Conor Keys stayed on the ground after tackling the Fijian #13, Radradra, and he would be replaced by Evan Olmstead. That would end the half, 19-13, and Canada were still well in the match but down two starting forwards.

It only took 3 minutes of the second half for Fiji to score their next try and it was all power, no Fijian flair needed. The tighthead, Ravia, picked the ball up from a ruck and was joined by the #6 and #11 on his shoulder and they just pushed the Canadian defenders Baillie, Sheppard, Brouwer and Ilnicki over the goal line, it was brute strength on display and when four of your "big" forwards can't stop that it's going to be a long day, 26-13.

The next try 8 minutes into the second half was vintage Fijian, off a scrum, one pass #10 to #13 missing #12 Blevins took a wrong line on his opposite number and they were around the corner and off to the races. One more pass to the winger, Tuisova, and he outlegged #12 Hearn and outmuscled #15 Nelson to cross the line, 31-13.

Fiji mauled in their last try with about 10 minutes left, 38-13, which was the end of the scoring. Canada played their best rugby in the last few minutes, putting together phases and they brought Hassler inside from the wing for their second line break of the match. Two line breaks in the match, both from bringing the wing inside, their last score against USA was bringing the winger (Trainor) inside from the wing.

The most disappointing part of the match was probably Canada's inablitity to turn lineout and mauls close to the Fiji goal line into points. It became an object of bemusement for the commentators who were keeping count and they counted to 5 at least in the second half.

Next up is Tonga, the easiest match of the PNC for Canada. Tonga lost to Samoa in the first round and were pounded by Japan 41-7 in the second round. This is a match that Canada should target for a win. Canada needs to get their backline working, they need more that 2 line breaks in a match, both from the same play. They've tried 3 different #10s, Nelson, O'Leary and McRorie - none of them really getting it done but probably McRorie, O'Leary, Nelson would be the ranking order based on the two games so far. The key may be changing out the #12, Hearn has played that position for both matches and it's just not happening. If Kingsley Jones is so hot on the former Ulster player Peter Nelson and he isn't going to be flyhalf, he hasn't really shown anything exceptional at #15 but has a solid boot and reliable tackling, then why not try him at #12 and see if it clicks? In the repechage he used Blevins at #12 and LeSage at #13 in some matches. Also the maul attack needs some rejigging, it's a go to tool for lower ranked teams when playing up, if that doesn't work then it's lights out when playing the likes of Italy and Namibia, two games Canada are targetting for wins but much, much improvement is needed if that's going to become a reality.

Coach Kingsley Jones is already going outside his original 31 man squad he announced for the PNC. Kainoa Lloyd comes into the roster as the 32nd man. The absence of Taylor Paris so far may indicate he's being rested due to injury concern. He missed the 2015 World Cup picking up a knee injury in the warm up match versus the USA. Paris has had an unfortunate history with the World Cup, in 2011 he was chosen by Crowley and would have been the youngest player to take the field in a World Cup but was never given any playing time. In 2015 he was injured after putting in a man of the match performance against USA in August, so in 2019 it's understandable if they're treating him with extra care. Also the Fiji RWC warmup matches have a history of taking out players, in 2015 tighthead Jason Marshall missed the World Cup due to a rib injury picked up in the Fiji match. It opened the door for Jake Ilnicki to take his place. So the absence of key players Tyler Ardron, DTH, Phil Mack is no surprise.

Few people expect 21st ranked Canada to win this match against 9th ranked Fiji, especially at home after they lost to Japan. Success would likely be staying within 20 points and not losing any key players, resting a few for the match solves part of that equation.

Eric Howard comes back in to play hooker, Quattrin again gets the reserve spot while Piffero is given the day off. Brouwer gets the start at loosehead with Ilnicki at tighthead, the reserve props are Djustice and Tierney. The second row is Conor Keys and Kyle Baillie, Evan Olmstead comes off the bench. Rumball comes back into the match 23 at openside and Matt Heaton takes the bench. Justin Blanchet gets the start at blindside and Luke Campbell starts at #8. Mike Sheppard provides backup.

The halfbacks are Gordon McRorie and Shane O'Leary, the experiment with Peter Nelson at #10 didn't go well so he returns to his normal fullback position. Jeff Hassler makes his appearance on the outside with Kainoa Lloyd, the centres are Hearn and Blevins. It's surprising that coach Jones didn't try another inside centre option after the poor performance in the USA match. Jamie Mackenzie covers scrum half and Conor Trainor provides backline cover.

It's certainly a nothing to lose match and an outstanding performance by any player may push their case forward for inclusion in the 23 to face Italy on September 26th. 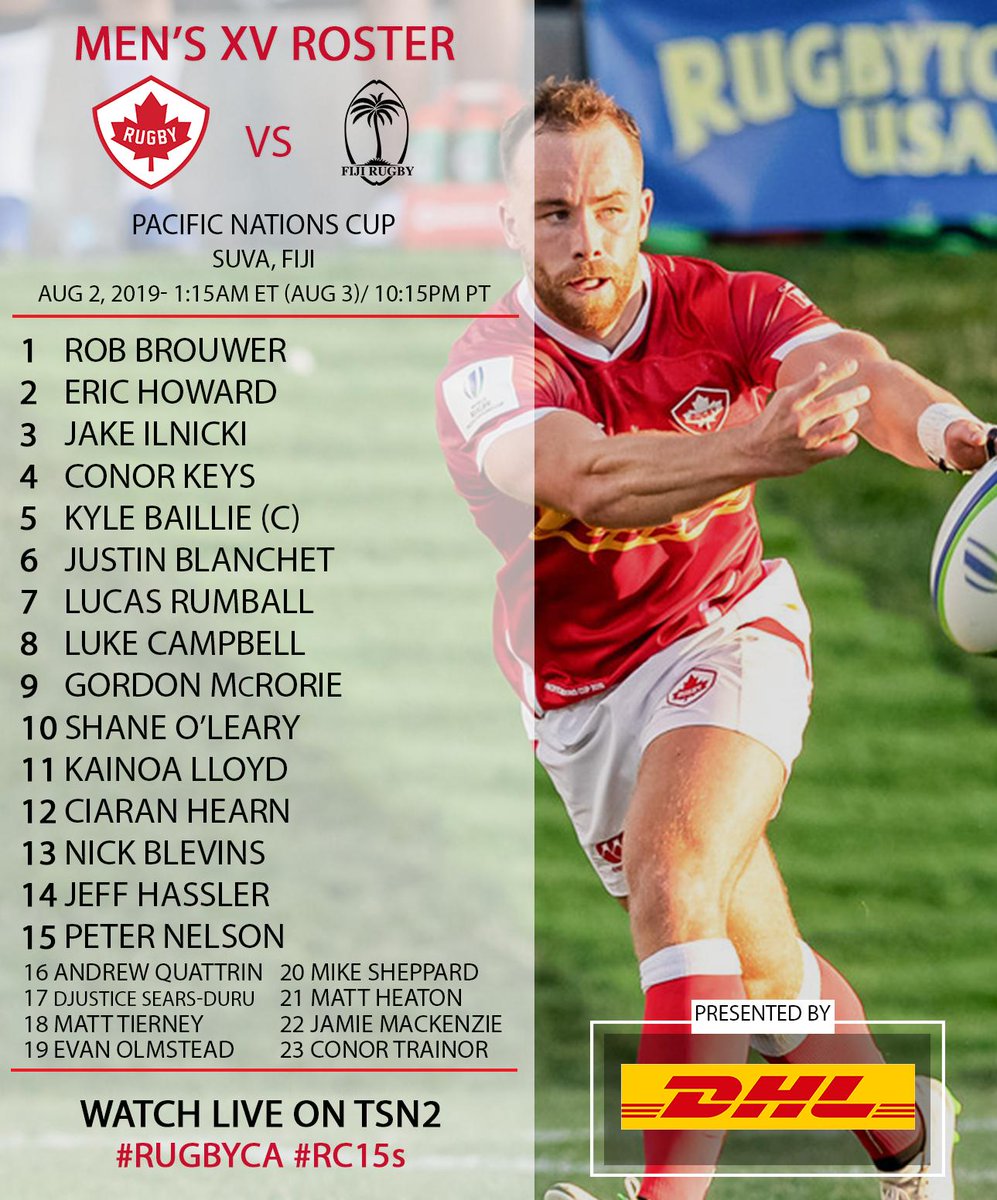 Fiji head coach John McKee has made wholesale changes to the side that lost 34-21 to Japan in Kamaishi last Saturday with only three players – all forwards – keeping their places.

Leone Nakarawa, who captain's the side for the first time, is named in the second row with Semi Kunatani and Viliame Mata packing down behind him once again, at number seven and eight.

In the backs, Henry Seniloli and Josh Matavesi are both promoted from the bench at half-back, Semi Radradra is fit to take his place in midfield, where he will be looking to extend his record of scoring in every test in his fourth senior appearance alongside Jale Vatubua. The back-three is made up of wings Eroni Sau and Josua Tuisova and full-back Kini Murimurivalu.

Reacting to last week's 47-19 defeat to the USA, Canada head coach Kingsley Jones has rung the changes with only veteran centre Ciaran Hearn wearing the same jersey. While Hearn goes again at inside centre, the other returnees – Conor Keys, captain Kyle Baillie and Peter Nelson – have different numbers on their backs. Conor Keys is named at four instead of five, Baillie joins him in the second row after playing at six last weekend and Peter Nelson is tried at full-back having made his debut at fly-half in Colorado.

It's all-change elsewhere with a front row of Rob Brouwerm Eric Howard and Jake Ilnicki, while Justin Blanchet, Lucas Rumball and Luke Campbell form the new-look back row. Experienced scrum-half Gordon McRorie has Shane O'Leary outside of him in the half-backs and Nick Blevins partners Hearn in a midfield combination totalling 126 caps between them. Kainoa Lloyd and Jeff Hessler fill the wing slots.

Fiji cannot improve their position in the rankings but defeat could cost them their place in the world's top 10
Canada cannot catch Russia above them no matter what the margin of victory is, although the gap will be down to 0.45 of a point if they win by over 15 points