Iroquois Roots Rugby Gets National and International Recognition from CBC and World Rugby Articles: Some Thunder Rugby Background and a Shout Out to Shawnigan Lake School

The CBC and World Rugby came out with excellent articles on the Iroquois Roots Indigenous Rugby program in Ontario, the articles are posted below with links. We'll fill in some of the details as we've seen the story grow from its beginning. 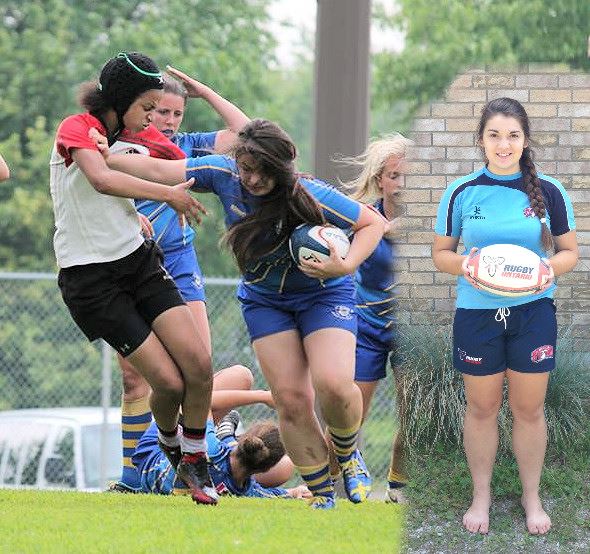 Mother Melanie and daughter Meagan are a dynamic duo that first showed up on our [Thunder] radar in January of 2014. In the late fall of 2013 we announced our first summer Thunder Indigenous Rugby camp at Shawnigan Lake School and Mel applied, the first out-of-province application we received. Mel and Meags arrived the summer of 2014 and Meags became part of our OG group. Meags was playing rugby at Brantford Collegiate at the time. 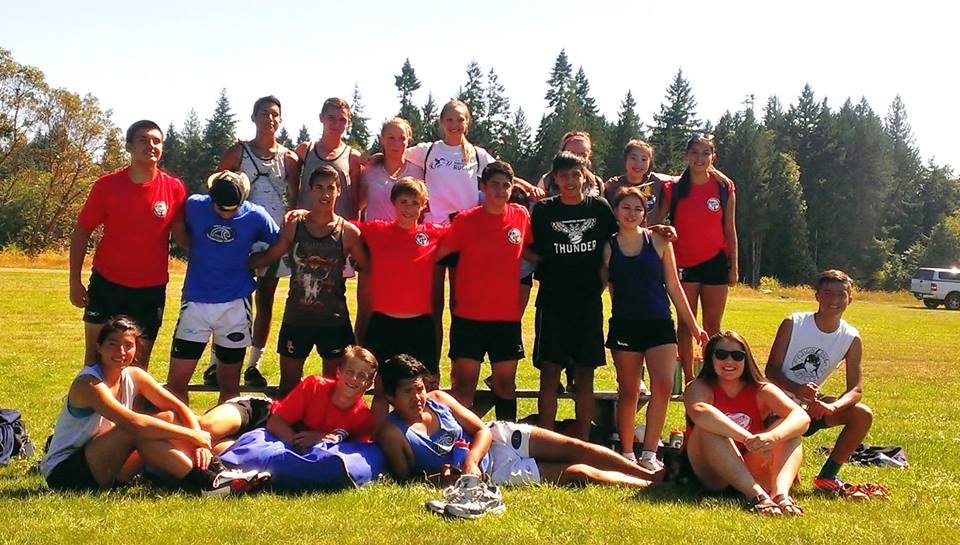 In the CBC and World Rugby stories one major piece is missing, and that's Shawnigan Lake School. Shawnigan hosted that initial camp and OG group and offered to give a scholarship to one of the participants, we gave them a few names and they chose Meags as the best candidate. Meags would start September 2014 at Shawnigan Lake School and live on Vancouver Island for her final year of high school... and of course play rugby for the renowned Shawnigan team.

In the summer of 2014 with all the excitement that Mel and Meags brought from Ontario, we raised some money to send Thunder head coach Phil Mack and Thunder Director John Lyall to Ontario for a week to help run some camps on the Iroquois Six Nations land near Brantford, again Shawnigan were generous in backing that trip. 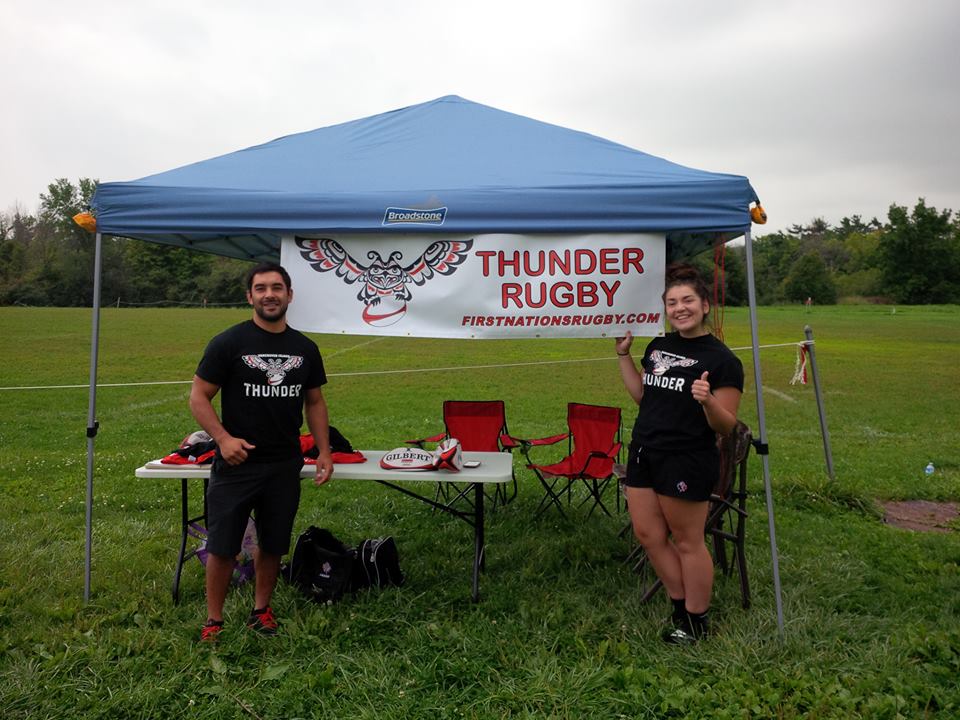 Meags came back to coach at subsequent Thunder summer camps and helped pass on her knowledge and experience to future indigenous rugby players. Meags went from Shawnigan to McMaster University to continue her studies and rugby. Meags currently plays club rugby for Brantford Harlequins who are having a successful year. 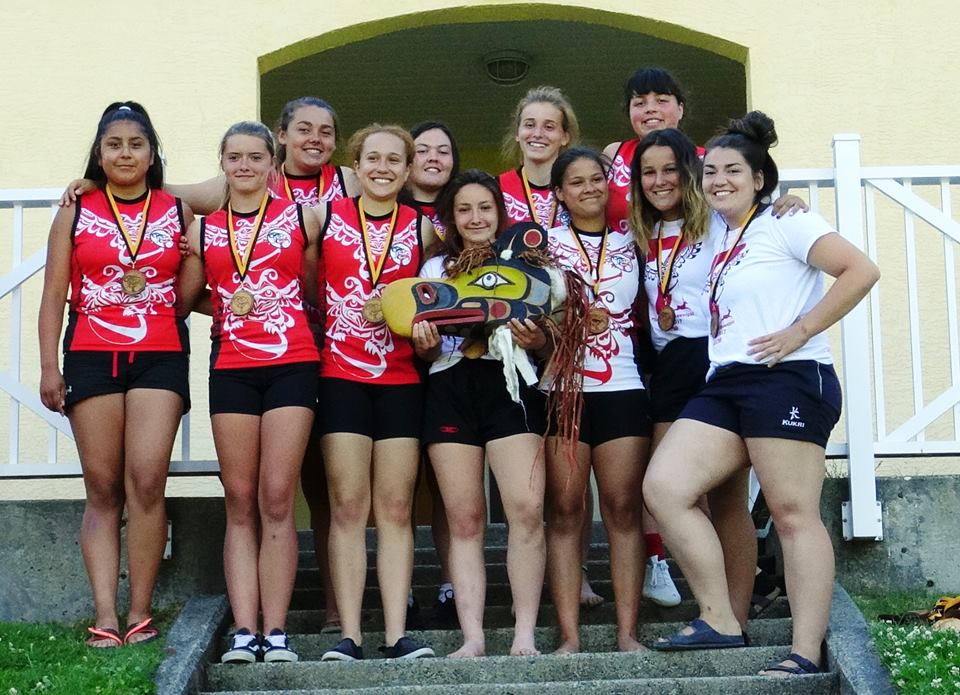 It's also a chance to mention another Meghan who had a role in the increased awareness of Indigenous led rugby inititiatives in Canada. Meghan Mutrie is a name some will remember from the past as a Canadian national team player. After suffering a serious concussion (another story for another time) she started working in media and landed a job in the UK creating the weekly Total Rugby video show for World Rugby, then known as the iRB. She convinced producers to do a show on the new Thunder Indigenous Rugby program from the west coast of Canada and do a profile on Phil Mack at the same time. The 2014 video is below and helped grow awareness world wide and in Canada for Indigenous led rugby programs in Canada.

The Thunder have their camp at Shawnigan coming up in less than a week, it will be the 6th consecutive year, thanks again to Shawnigan Lake School. Black Bear rugby from Saskatchewan are bringing 7 youth and 2 adults to the camp this year, hopefully we'll see Black Bear rugby grow and be the next successful indigenous led rugby program to gain national and international recognition. 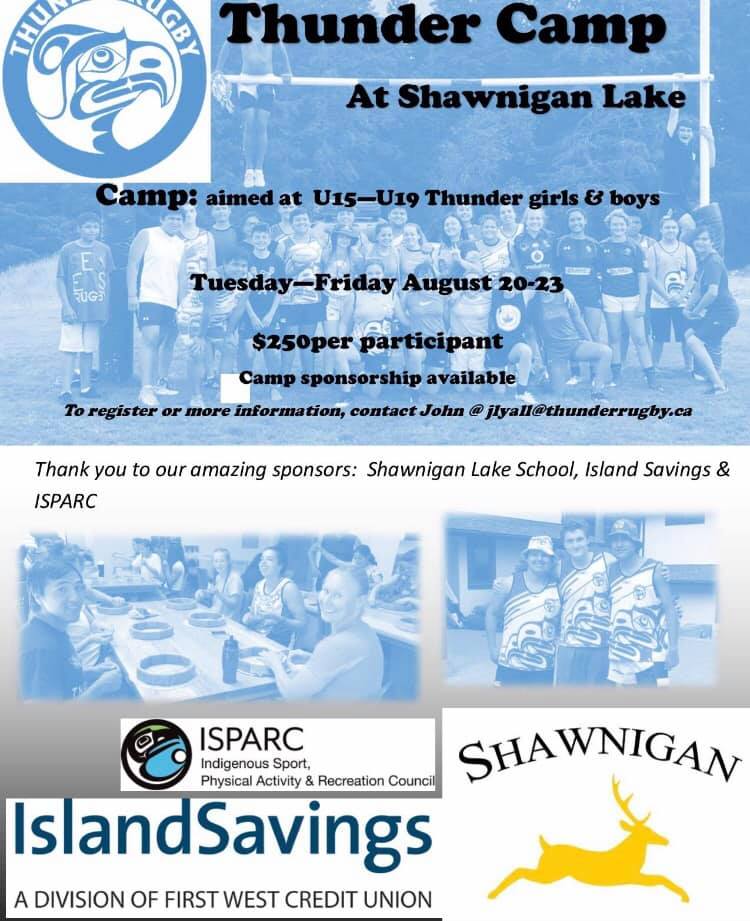 But since Iroquois Roots Rugby started, it's been love at first sight for the players.

"The kids that come to our camps walk in not knowing a thing about rugby, never having seen a rugby ball, and by the time we leave, we're having to call them off the field," said director Melanie Squire. "They don't want to quit playing."

The group has been running free training camps across Ontario for the past two years. Head coach Meagan Wilson, 22, teaches introductory skills to players of all ages. After playing with the Thunder Indigenous Rugby Program in Victoria and then at McMaster University, she was inspired to bring the game closer to her home of Six Nations of the Grand River.

Mother and daughter team Melanie Squire and Meagan Wilson are using rugby to provide indigenous youth in Canada with a positive outlet and help to build a sense of community and recently took a girls' U18 team to play in a provincial tournament in Ontario.

Iroquois Roots Rugby’s U18 women might not have made it past the bowl semi-final at the Great North Sevens in Markham last month, but the team’s involvement in the tournament alone was testament to the work being done by founders Melanie Squire and Meagan Wilson.

The mother and daughter duo set up the programme in July 2017 with the ambition of taking rugby into the 133 First Nations in Ontario, to provide indigenous youth with a positive outlet and help rebuild a sense of community on the reserves.

Indigenous communities in Canada face a number of socio-economic and other challenges. Clean, safe water is not guaranteed, obesity is prevalent and unemployment and suicide rates – particularly among women – are much higher than the national average.

With that in mind, the sight of Ontario’s first all-indigenous women’s U18 team taking to Fletcher’s Fields to compete with the best age-grade sides in the province was an important one, regardless of results.

“It was really cool walking into the tournament, even just at the field everybody there had heard of us, everybody there was super excited to meet us and see us,” Wilson told World Rugby.

“They were having fun with it which was great and people from the other teams were coming up and saying, ‘You are doing amazing work’.

“Not [saying it] to me, to the girls, and just boosting our confidence and helping them to realise that they were playing elite teams but they were doing well and they weren’t giving up or getting down on themselves.

Squire added: “I think they gained experience, which they never had before, that was their first time in a game situation. They gained a sense of what the rugby community’s all about.”

Since the tournament in Markham both Squire and Wilson have witnessed an increase in engagement and enthusiasm at training sessions.

“The kids know now what they need to work on,” Squire said.

“We had a little chat about that the other day with the kids, and they were the ones giving us feedback. To say ‘Oh, now we know what to do in a scrum’, ‘Now I know exactly where my head should go’, that type of thing.

“And they were telling us what they wanted to work on for upcoming games and stuff like that. So that was great, and great feedback, it was just a great experience overall.”

Roots Rugby has held camps across Ontario in the past two years – all completely free of charge to those who take part – and estimate they have introduced rugby to 200 indigenous youths, aged between five and 19, in the province.

A lack of funding in 2019 has restricted their work to the reserve near Brantford on which both Squire and Wilson live, but they were able to field a boys' team alongside the girls at the Great North Sevens.

The response to the programme from the community has been “pretty supportive” according to Wilson, and has been amplified by the clips of action shared on social media.

A GAME FOR ALL

Wilson began playing rugby while in the ninth grade of school, and she believes the sport is the perfect tool for the work that Roots Rugby aims to do.

“It’s super inclusive,” she said. “There’s something for everybody no matter what, and it’s also an easy sport to pick up just because all you need to play is a ball and some friends.”

Squire added: “A lot of the communities are very small, some are remote and you can only fly into them.

“So, there’s not a lot of recreation or even sports that are organised in these places, so what makes rugby perfect for these places is, you know, all we need is an open space and a ball to get a game going.

“That’s what makes it perfect. There’s no equipment needed, there’s no registration fees for parents to have to pay, you give the kids a ball and we play.”

Wilson was first alerted to the role rugby could play in indigenous communities when she joined Thunder Rugby while studying on Vancouver Island.

Thunder Rugby, whose head coach is Canada scrum-half and member of the Toquaht First Nation Phil Mack, was set up six years ago with the aim of introducing the game to aboriginal communities on the island in British Columbia.

Wilson initially joined as a player but eventually moved into coaching, with her and Squire travelling the 3,500km (2,175 miles) from their home in Ontario annually.

“I then returned to the [Thunder] programme as a coach for a couple of years and then I figured it doesn’t make sense for me to be flying across the country to do this work when I could just be doing it myself in Ontario,” said Wilson.