It was full day of rugby at the newly renovated Westhills Stadium, the weather cooperated and there was some top talent on display. In the men's Elite it came down to a final between MacDowell Rugby and the Coos an invitational team based in Kelowna. MacDowell Rugby featured a young Canada lineup which included series players like Jake Thiel and Josiah Morra and some upcoming talent - it wouldn't be far off a Maple Leaf side we may see attending the South American tournaments in January. The Coos, who had won several BC tournaments going into the Langford 7s, featured Isaac Kaay, Dustin Dobrasvksy and Nakai Penny.

MacDowell went up 12-0 before Coos scored one at the halftime whistle 12-5. Coos tied it up in the second half at 12-12 before MacDowell pulled away with two tries 24-12.

The MisFits from Ontario won the men's U19 division defeating Westshore in the final and Thunder Indigenous Rugby defeated CW in the women's U19 final. 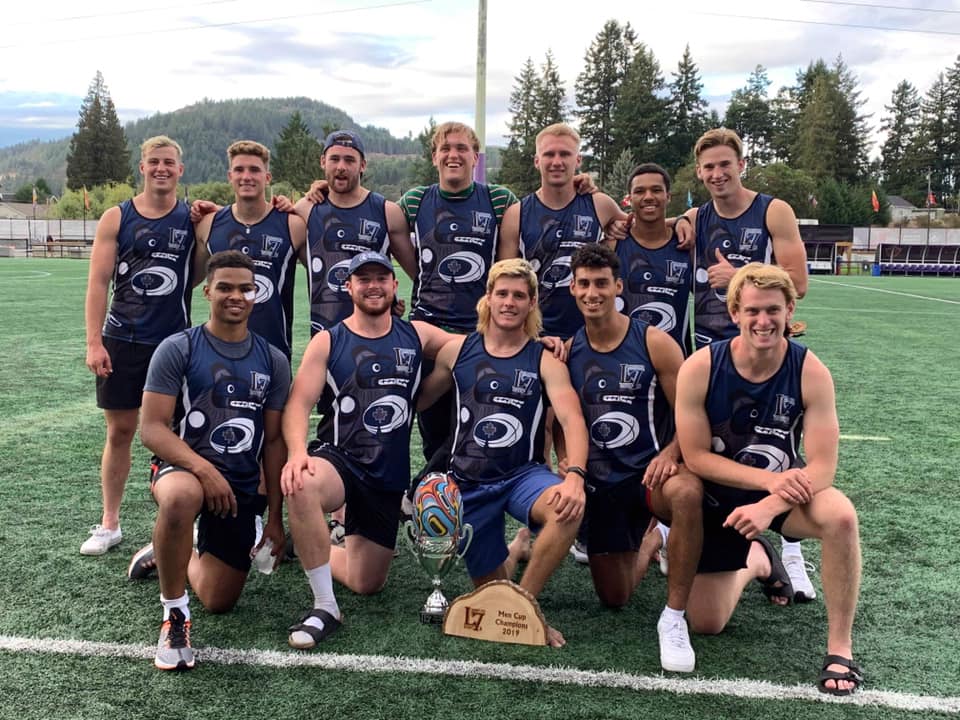 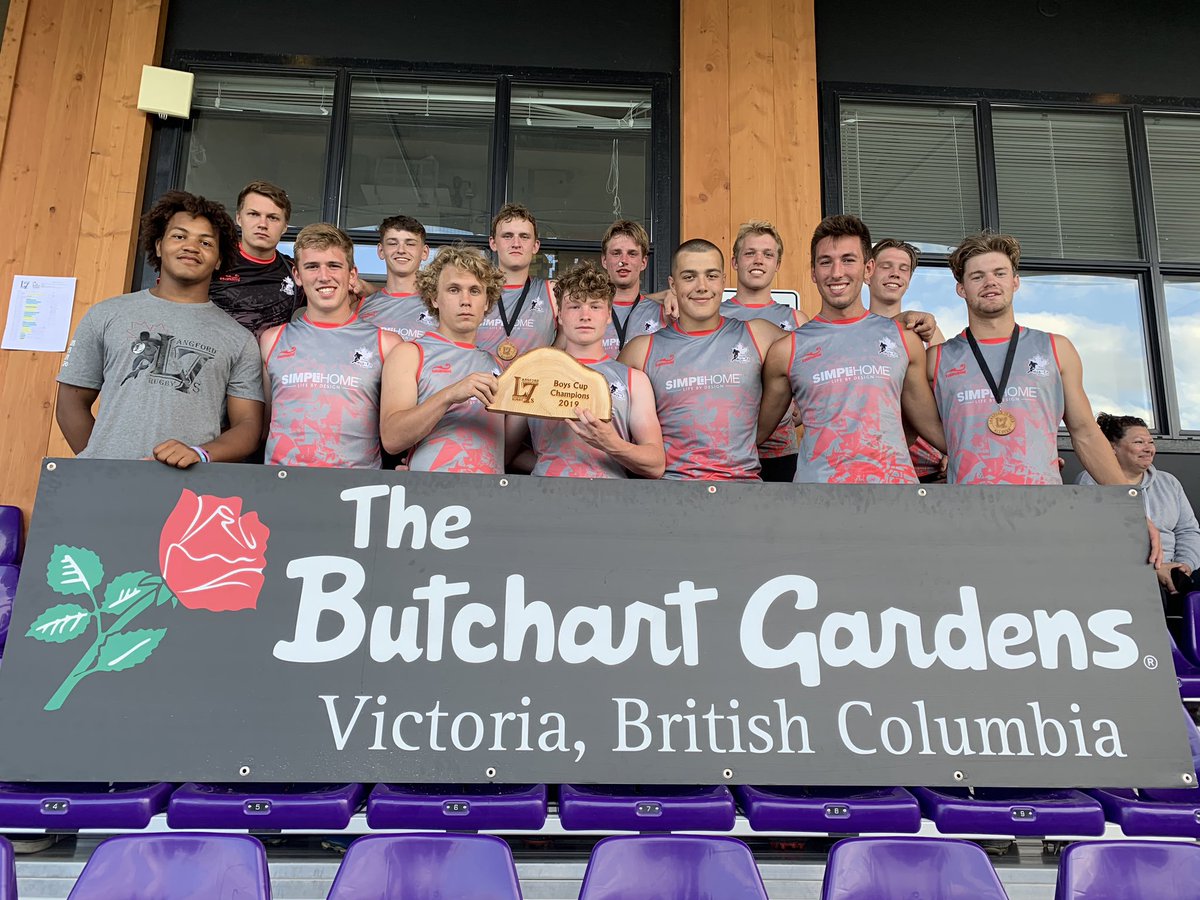 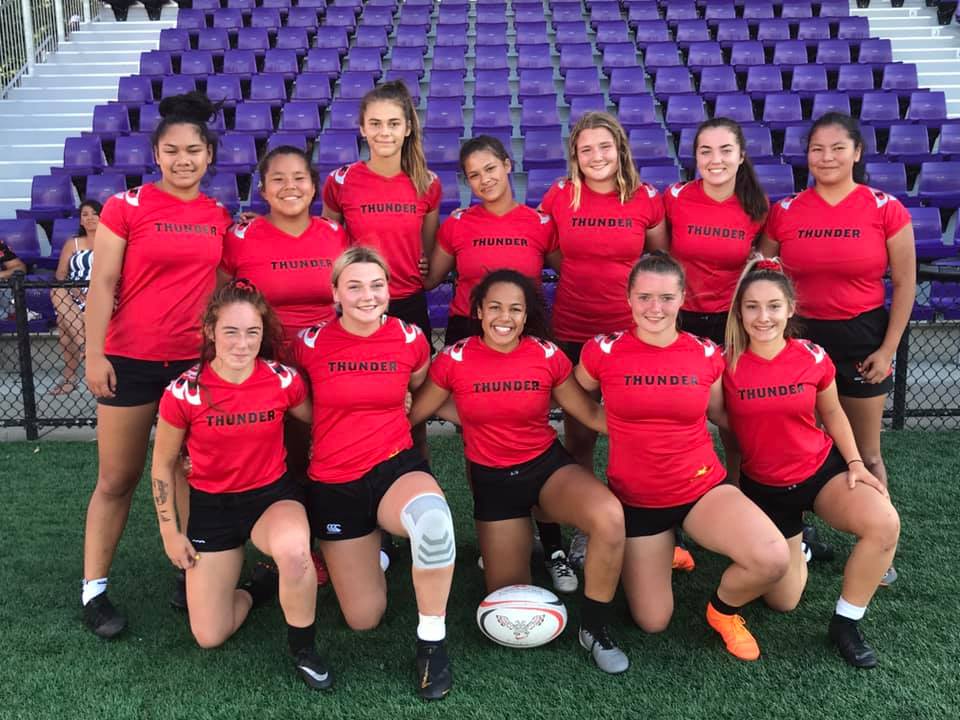 
BC Next Gen Announce Roster for Elite Men's Division

Coach Sean White has released his roster for the Elite men's division at Langford 7s. He'll be trying to match the two early favourites MacDowell Rugby (scroll down for roster) and Coos (scroll down for roster). MacDowell has put together a formidable Young Canada side led by capped player Jake Thiel and featuring a number of Pacific Pride players. The Coos have put together a more veteran team that includes players capped in XVs and 7s.

BC feature former series player Luke Bradley and the return of Jordan Wilson Ross to rep rugby. Whether they'll be able to upset MacDowell or Coos to make the finals and claim the $1000 prize remains to be seen.

BC Next Gen Roster 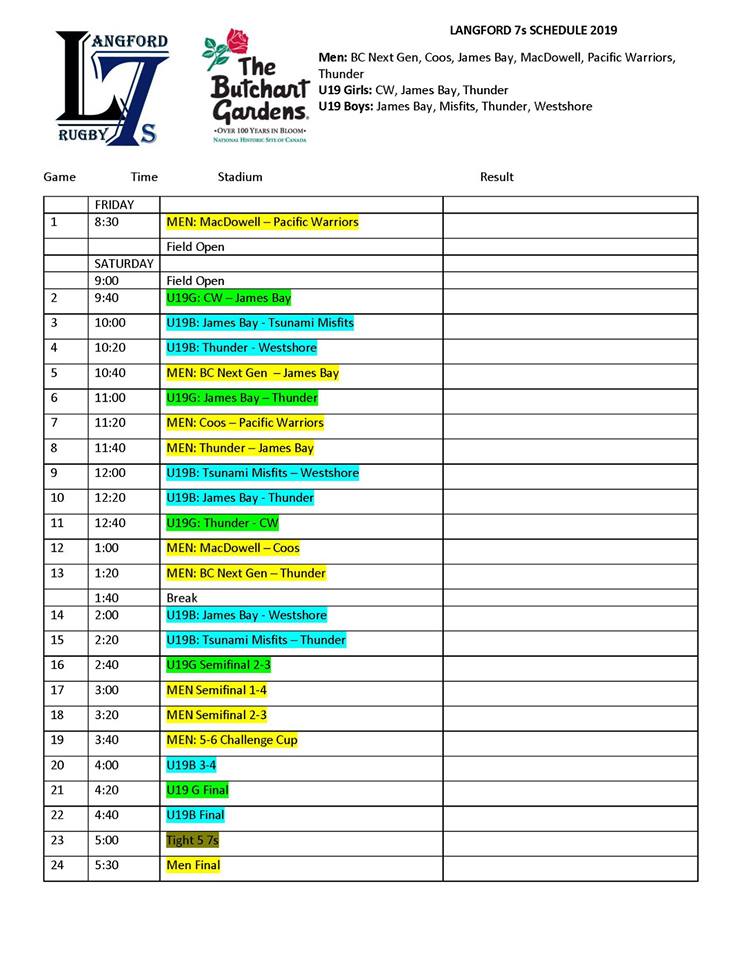 The question is will any team be able to match the level of the young Canada team assembled by MacDowell Rugby (scroll down for roster) and the answer is yes with the Coos putting out four experienced, capped players in Isaac Kaay, Dustin Dobravsky, Doug Fraser and Nakai Penny. Nakai hasn't played a lot of 7s but as an openside flanker he has a big engine on him and will add physicality to the Coos side. Jean Charles Fidinde is from France and has been playing with the Coos in the tournament wins they picked up in BC already. A couple of Fijian born players never hurts in 7s and Coos have a couple on the side, plus for good measure they've added CW flanker Nathan Stewart. It will be interesting to watch the contrasting styles when Coos play MacDowell Rugby, that match will be at 1pm. Live stream on the Langford 7s FB page. 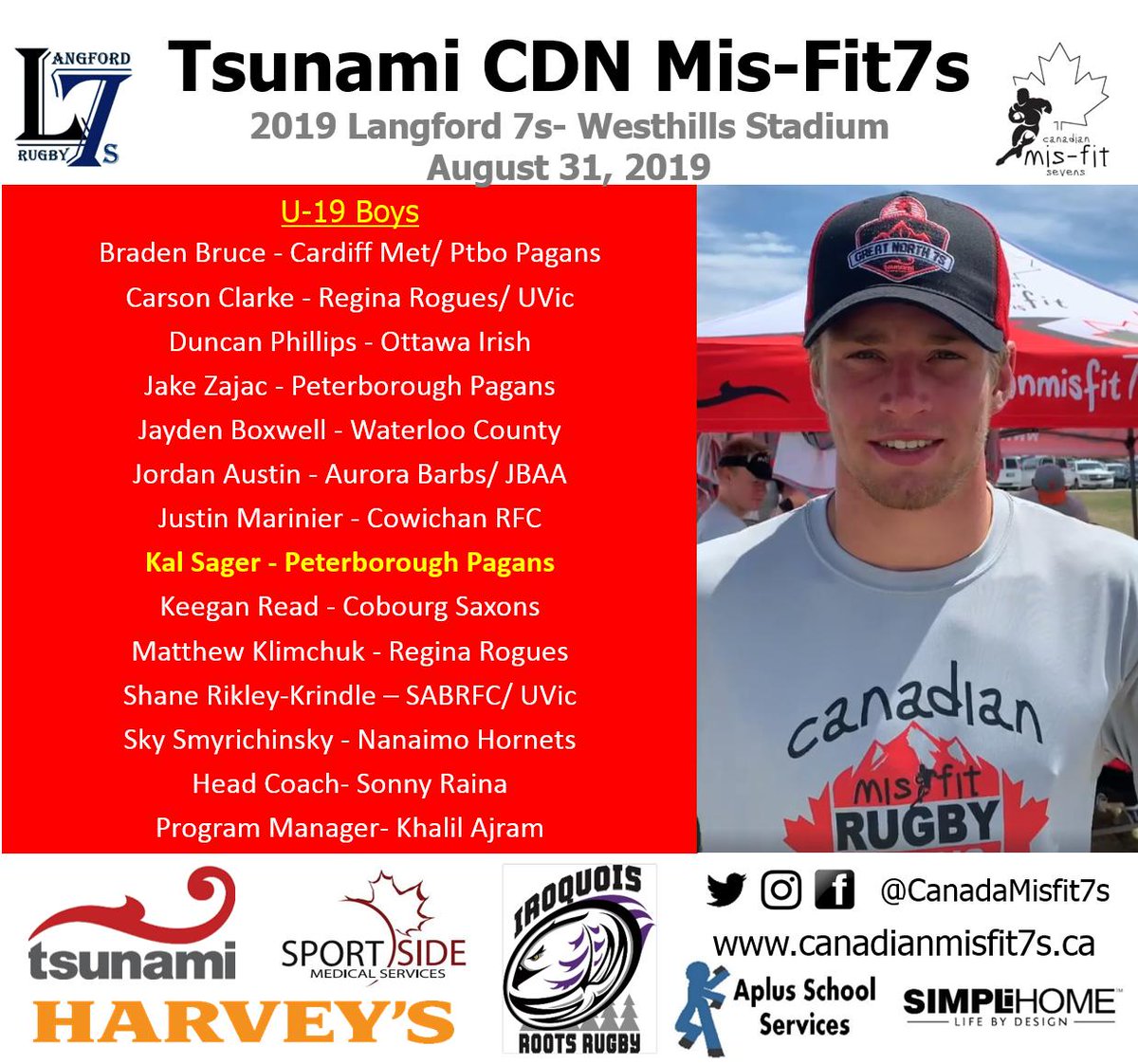 Robin MacDowell has put in a very strong squad, almost a young Canada squad, it will be interesting to see if other top contenders BC Next Gen and the Coos can match up with them. BC Next Gen won the Vancouver 7s invitational in March and the Coos, managed by Cam Pierce, have been winning the summer BC tournaments to date - this will be their biggest test. There are a number of World Rugby series players on the MacDowell team including Jake Thiel, Josiah Morrah, Brock Webster, David Richards. It will be interesting to see if any of the other teams can test them. Some of the players will likely be participating in the Pacific Pride inter-squad the day before.

We'll be live streaming the event (hopefully no glitches) on the Langford 7s facebook page. Commentators on the day will be rugby personalities Johnny Morris and Brandon Gerhardt - both with many years of experience in the BC leagues. They'll entertain viewers with their knowledge of the local rugby scene combined with astute technical insights, and endless wit.

We are excited to announce our roster the 2019 Langford 7s August, 31st. The majority squad will be made up of U20 Canada, and Canada 7s players which I have had the pleasure of coaching over the past few years. MacDowell Rugby is focused on developing Canadian rugby players while giving them an opportunity to further develop and gain experience in their young rugby careers. This is an athlete lead group which has selected their peers so they can have a run together at this great local competition.

We will be lead by Canadian International Abbotsford's Jake Thiel who is fresh off an Olympic Qualification earlier this summer after a break out season on the circuit. Jake is such a talented dynamic sevens forward and is the future of Canadian rugby. As part of our tournament build up our team will take part in a two day sevens camp in the Cowichan Valley which we will use as a platform to build for the weekend while Canada's bright stars share and inspire athletes from across western Canada.

Giving opportunities for the core of top under 23 sevens players to play with each other is so key for the chemistry they will need for future success.

"I’m very excited to play for MacDowellRugby in the upcoming Langford tournament. Robin has built up quite the coaching resume and I’m excited to work with him for the first time. I am excited to be associated with MacDowell Rugby as I think we need high level Canadian coaches spreading rugby nation wide.

It’s an awesome group that we’ve assembled for this tournament and I’m itching to get on the field with them. I think there are a lot of future Canadian sevens and fifteens players on our team, so it’s going to be a lot of fun to see some of the skill and speed on display. Since we have such a talented and experienced group, it makes leading the boys a breeze. When you’ve got so many great players on one team it makes it easy, I’m excited to just play my game and lead by example. I’ve been looking forward to this tournament and getting the chance to play with my friends for awhile."
- Jake Thiel 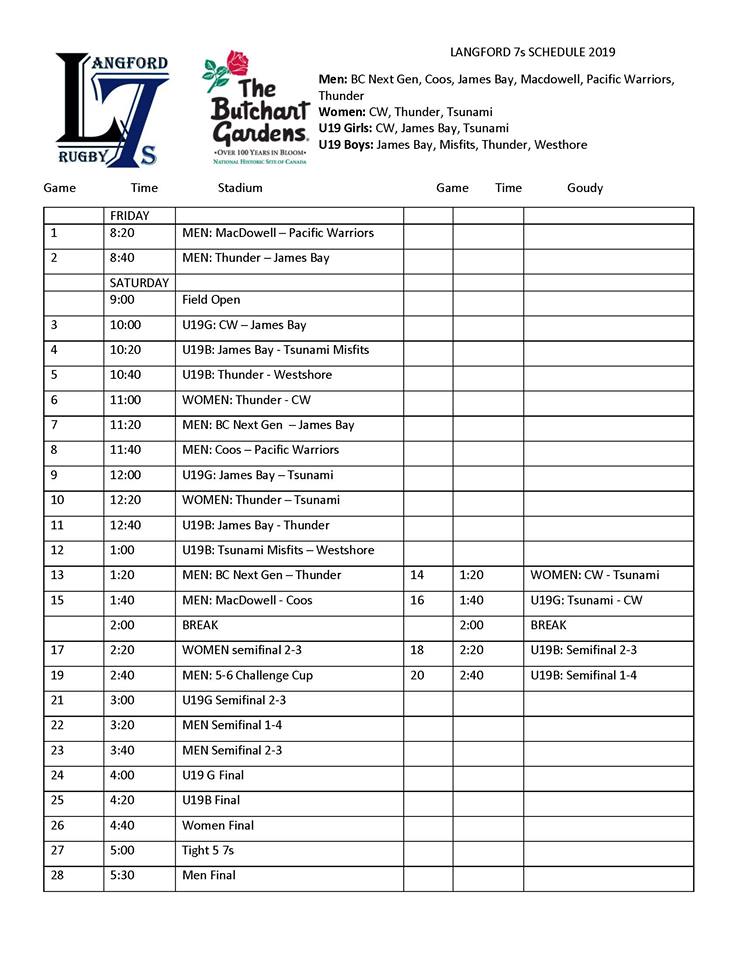 Langford 7s on Saturday August 31st: 8th Year for Tournament Features Top Senior and U19 Talent - A Look at Canadian MisFits U19 from Ontario

The 8th version of the Langford 7s takes place Saturday August 31st with several games taking place under the lights on Friday evening, the 30th, after the BC vs Canada match.

Jamie Cudmore, the iconic Canadian rugby player now heading up the Pacific Pride Development Academy will be there on Friday evening and Saturday. It's a great chance for U19 and senior players to get noticed by national team selectors.

One of the feature teams at the U19 level are the Canadian MisFits, headed by Nigel D'Acre the current national U18 7s coach and Khalil Ajram the national U18 7s team manager. They are at the forefront of national youth 7s development and their appearance at this tournament, travelling from Ontario, shows their unmatched commitment to developing and identifying players at this level in Canada.

The list below shows some of their accomplishments in 2019 alone.

They'll be coached by Canada Red U18 head coach Sonny Raina at the Langford 7s. Going up against them will be some of the best U19 BC players represented through clubs and regions like CW, JBAA, Westshore, North Island Tsunami. Unfortunately the BCRU don't have a U19 7s development program operating at the current time, so U19 mainland players who want a shot at playing in the tournament should contact John Lyall jlyall@thunderrugby.ca and he'll put you in contact with one of the tournament teams.

Over the next couple of weeks we'll look at other teams in the tournament. The Saturday matches will be live streamed from the Langford 7s facebook page.