You could say BC put in a good 40 minutes, the starting XV put in a gritty performance but the bench couldn't maintain the effort. The score at the half was 17-13 for Canada but BC were outscored 28-0 in the second half. The most noticeable part of the BC game in the first half was their intensity at the breakdown, making life difficult for Canada to recycle the ball quickly and winning a few turnovers in the process. Some notable performances from Cole Mosychuk, Adam McQueen, Reid Watkins and a few other BC players. The BC scrum was solid in the first half with John Braddock, Tom Larder, Bryce Worden but fell apart in the second half when the subs came in.

Canada scored 6 minutes in from a scrum in the middle of the field, it looked like the BC centres pinched in and Canada found the extra attacker out wide, 7-0. It seemed a little too easy and there were early hints of a point a minute performance on the books. Canada scored another try through the maul at the 11 minute mark and they were ahead of the point per minute rate, 14-0. BC's break came when Cole Mosychuk put in a solid hit on Theo Sauder off the kickoff and then John Braddock jumped on a ball that came out of the ruck on a subsequent phase of play. BC turned the pressure into 3 points, 14-3.

BC applied more pressure and Owain Ruttan had a nice run off a maul which was illegally taken down and Canada received a yellow card. BC took another 3 points and it was 14-6 with 25 minutes gone. Shane O'Leary added 3 points in front of the posts when BC infringed inside their 22 and Canada went ahead 17-6 at 28 minutes.

BC had their best period of play around 33 minutes when they put in a multiple phase attack with quick recycling. Fullback Blake Mahovic made a line break which put the Canada defence on the back foot and BC ended up with a 3 on 1 break on the outside, Colby Mason didn't need the two players outside of him and BC crossed the line for the first and only time in the match. Nicely converted from the sideline by Adam McQueen, 17-13 at the HT break. That would be the end of the BC highlights as subs were brought on in the second half and it was all Canada.

For Canada the player who perhaps gained the most from the match was Theo Sauder, showing that he has the X factor as he sliced through the BC defence on more than one occasion. Shane O'Leary was accurate in his kicking and likely confirmed his spot as one of the #10 options on the team. Andrew Coe also put his hand up for a possible back three spot going to Japan.

Not too many surprises from the lineup we predicted earlier, the front row was spot on with Brouwer, Quattrin, Keith - players that missed the Leinster game. Front row cover is provided by Barker, Piffero and Ilnicki. We also got Josh Larsen and Nakai Penny right but coach Jones perhaps wants a little more certainty for a strong start and went with Mike Sheppard, Justin Blanchet, Luke Campbell ahead of Conor Keys, Travis Larsen and Dustin Dobravsky who will come in off the bench. Matt Heaton provides cover for the openside.

Jamie Mackenzie and Shane O'Leary get the start at halfbacks with Phil Mack and Will Kelly on the bench.

Andrew Coe and Jeff Hassler start on the wings with Kainoa Lloyd covering from the bench. Connor Trainor and Guiseppe du Toit start in the centres with Doug Fraser on the bench. Theo Sauder starts at fullback.

Are there any spots open for the 31 going to Japan or has Jones already inked that in? Will the roster for the USA match be similar to the Leinster match or will some new faces from this game get a second look? Answers coming next week.

It would be a huge upset for BC to win, the more likely question is will it be competitive and what will be the differential. We've heard Brock Staller has pulled out, which will hurt BC, we'll get that confirmed shortly when BC release their starting lineup. 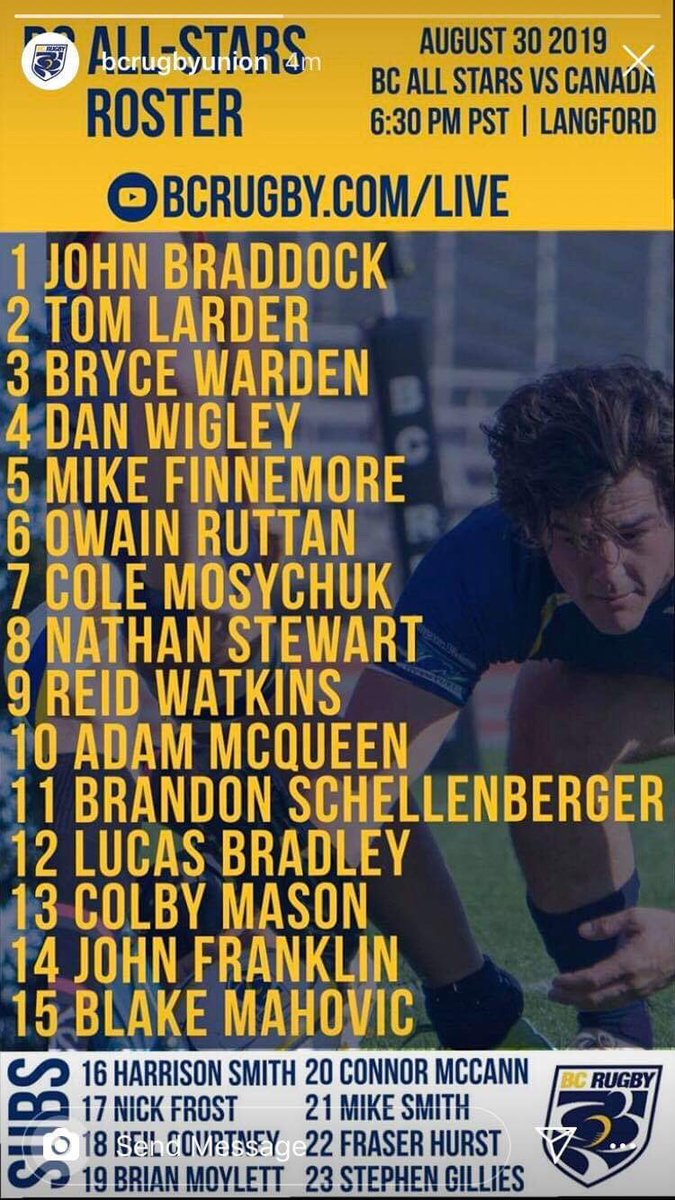 BC have named 25 players to face a Canada side on Friday evening, August 30th. Looking over the roster a few names are missing, Aaron McLelland the big one, he has the talent to break into either the XVs or 7s team at the national level. He was originally mentioned in the Toronto Arrows preseason roster but ended up staying in BC. He shredded the Wolf Pack defence when he suited up for BC in their last match. Also missing is Chris Taylor the talented prop. The front row may be one area that BC are overmatched in depth by a Canada XV. Props John Braddock, Bryce Worden and Neil Courtney are well known names but we know less about Nick Frost. The hookers Tom Larder and Harrison Smith should hold their own.

Big Mike Finnemore will add some bulk to the second row but BC are just about to start their season in September, how fit will some of the players be coming into the match? The Canada players have been training to make the final cut for most of the summer. Dan Wigley is a second row from Lomas.

It's good to see Luke Bradley finally get involved in rep rugby, after being cut from the 7s program he's never really been given a chance to show his XVs form for national contention. He played well at the club level in the BC Premier last season, not his old #8 role but as a slimmed down centre now. A few other names showing up for the first time this summer in rep rugby, national U20 players from last year Mike Smith, Owain Ruttan, Brandon Schellenberger.

The halfback combination of Reid Watkins to Stephen Gillies worked well in the second match against the Wolf Pack. Cole Mosychuk gets a chance to show his stuff at openside. Brock Staller is the only capped player in the side and there's no sign of Seattle teammate George Barton. The addition of #8 Brian Moylett is a plus for BC, the BCRU press release lists him as Burnaby Lake but he played for UBCOB Ravens last season.

Looking at the players from the Canada long list that didn't get to play vs Leinster, their roster may look something like this if it's Kingsley Jones' intention to give everyone a run before choosing his side for USA.

The game will be streamed live by BCRU, the Pacific Pride inter-squad is at 4:30pm and some Langford 7s matches will take place after the main event.

Vancouver, BC - August 22, 2019: BC All-Stars Head Coach and Rugby Development Manager Aaron Takel has named his roster to compete against the Canadian Men's XV in a World Cup warm-up fixture on August 30th in Langford, BC. The squad will take on the national men's team in their second of three warm-up matches to help the team prepare ahead of the 2019 Rugby World Cup (RWC) in Tokyo this Fall.

The team has been selected based on multiple criteria, including performance in the 2018/19 BC Senior Leagues, performance as part of the BC Bears program and ability to provide strong opposition and meaningful competition for Canada as they build towards their first RWC match on September 26. Several experienced players pepper the list including Brock Staller, Nathan Stewart, Neil Courtney and Ried Watkins, all of whom starred in the comprehensive BC Bears home victory over Prairie Wolfpack in Kelowna this summer. They are joined by the likes of Brandon Schellenberger, Elias Ergas, Michael Smith and Owain Ruttan, all of whom played for the Canada U20 Men's XV at the 2018 Junior World Rugby Trophy in Bucharest.

“The players are excited to get back on the field to represent BC," said Head Coach Aaron Takel, "especially those who were part of the squad that overcame a big deficit against the Wolf Pack to win the Best in the West series this summer. Some players have a point to prove, some of them feel that they deserve to be knocking on the door for selection with the national team programs. This is their chance to take on the person currently occupying that position in the Canada camp”.

With a dozen or so BC players already named to the 2019 Canada RWC longlist, a further dozen currently working with the Pacific Pride Academy (and unavailable for selection) and a short time scale to work with, the coaching team was presented with a challenge. However, a testament to the depth of talented players active in the BC Senior Leagues, Takel and his assistant coaches (Curry Hitchborn, James Thompson, Jebb Sinclair and Sean White) will field a team that is likely to capture the interest of many rugby fans in the Province. As Takel commented, “We are lucky that there is so much talent in the BC domestic club leagues that we can put a team of this calibre on the field, and with no preparation, feel confident that we can take on some of the best players in the country.”

As this will be the last opportunity for rugby fans to see the National Men's XV play on Vancouver Island before their RWC journey begins, a large crowd is expected for the match at Westhills Stadium. The game will be preceded by an intrasquad game by the Pacific Pride Academy, coached by Jamie Cudmore. Pacific Pride, who will be playing as part of the BC Rugby Men's Premier League this season, will be largely made up of uncapped players from across Canada whose progression suggests they are one to three seasons away from playing senior international rugby.

Canada will wrap-up their 2019 RWC warm-up series against the USA on September 7 at BC Place in Vancouver. This will be the 63rd meeting between the two sides with Canada hoping to secure their first win over their southern rivals since 2013. Tickets for this and the August 30 match are still available, check out the Rugby Canada ticket site for more details.

BC All-Stars vs Canada

Streaming for the game at Westhills Stadium on August 30 will be available at bcrugby.com/live

Attention all rugby fans aged 18 and younger. Would you like to be part of a Half-Time Rookie Rugby Extravaganza at Westhills Stadium or BC Place?

This is your chance to take to the field at half-time during Canada's RWC warm-up matches and play in front of cheering fans just like your national team heroes. Check out the BC Rugby Membership Benefits page for more details on how you can get involved at each match.