What's Next for Men's XVs

After the flop of the World Cup for Canada, what's next? The ARC - Americas Rugby Championship will be moved from it's usual February/March window to August/September. It won't conflict with the MLR season now but how will it affect the player availability of overseas professionals? World Rugby haven't released any schedule details yet and likely won't until after the World Cup buzz has died down.

There will be summer tests, teams haven't been announced yet but indications there might be a couple of "good sides" in the mix. There may also be tests in the March window vacated by the ARC but again no confirmation yet.

The question is will coach Kingsley Jones start off this four year cycle with a fresh approach, include a wider group, blood some new players or will he stick to his previous pattern of only trusting a core group. One statement he made in the latest Rugby Canada article doesn't bode well for the future. He's quoted saying, "Good news is we have an idea now of what a 2023 and 2027 squad could look like." - how on earth can he know what the 2023 and 2027 squads could look like. There will be 100s of top prospects he's hasn't heard of yet who will be coming into their prime in four years, never mind in eight years. If he's already building his core, trusted group now for 2023 (and 2027) it's not a good sign and speaks to his attitude towards looking at a wider group of players and supporting the rugby development structures in Canada.

The women's University Championship will be held October 30th to November 3rd and hosted by the University of Ottawa.

The West will be represented by two teams. The winners of the playoff matches this Friday will go to the nationals, it's #1 Calgary v #4 Lethbridge and #2 UVic v #3 UBC. The playoff tournament will be held in Lethbridge. 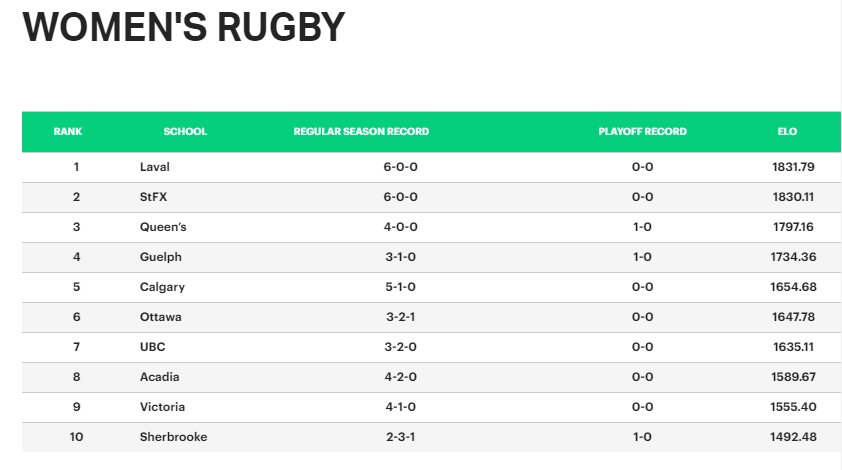 The men's University championship will be held November 20th to 24th at Concordia University. The mean temperature last November 22nd in Montreal was -13.5C with 6cm of snow on the ground. The backup plan in case of extreme cold is to use the adjacent Stinger dome, It's a seven storeys high, 133 metres long and 59 metres wide, inflatable dome inaugurated in 2010. The UBC Thunderbirds have won the last two championships and have already qualified as West #1. Last year it was UBC, Queens, UVic, Concordia as the top four and this year looks to be similar with Queens undefeated in Ontario and Concordia undefeated in Quebec. 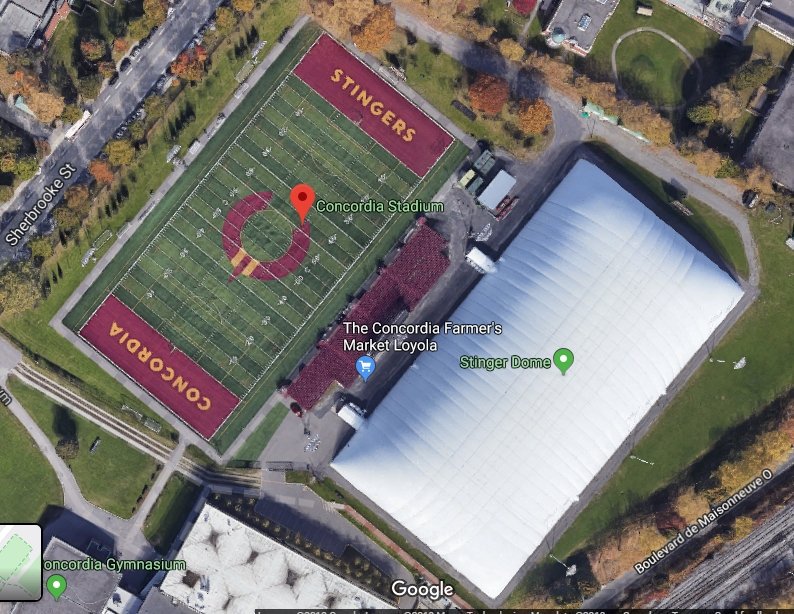 UVic will play the winner of the CanWest playoffs to determine West #2. The overview from the University Championship facebook page is posted below and outlines the status in the four regions. 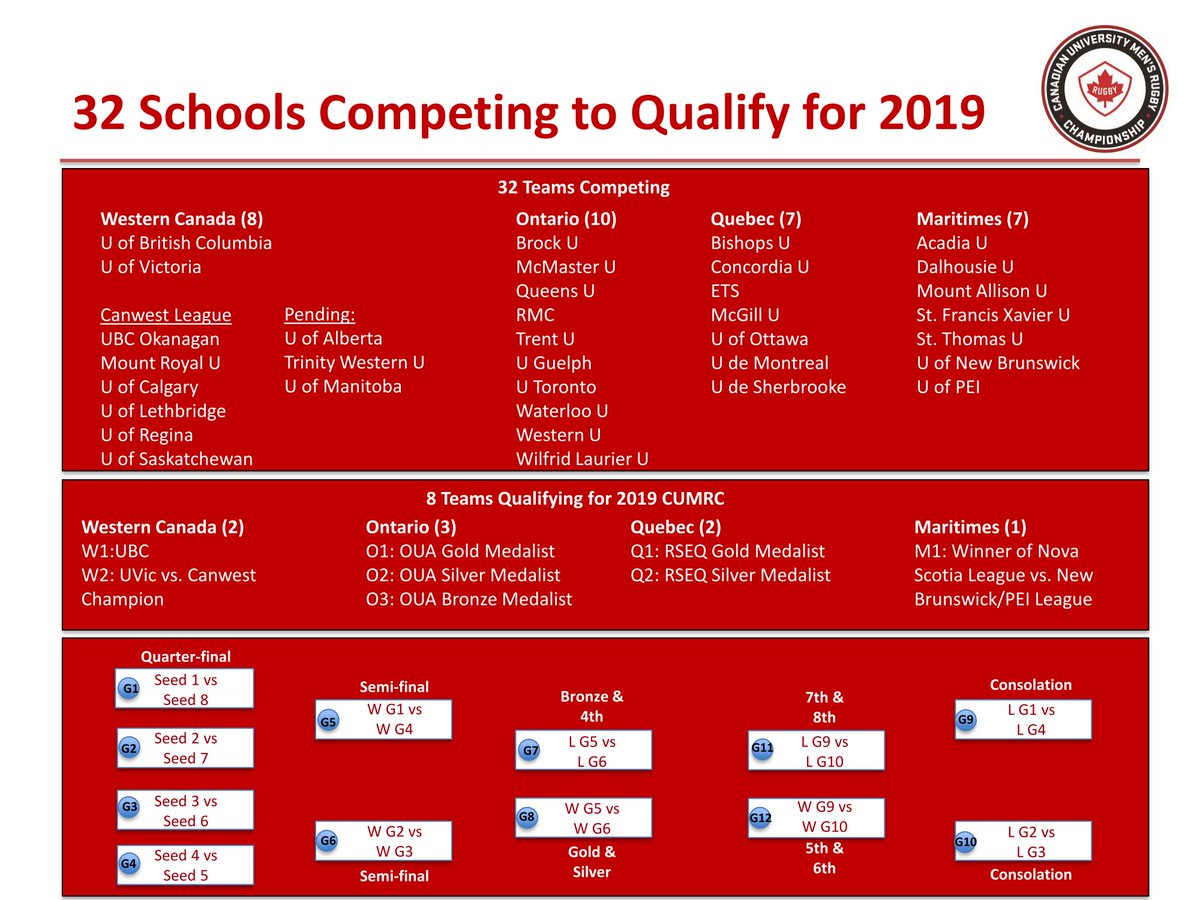 WEST
UBC defeated UVic on October 11 in a BC Premier League match that determined the WEST #1 seed. The Canwest League plays its finals on Saturday Oct. 26th and Sunday Oct. 27th. The Canwest Champion is then expected to play against UVic at neutral site Trinity Western University in Langley, BC on Saturday, November 9 at 1:00pm. The winner will be the WEST #2 seed.

ONTARIO
The OUA regular season ends on October 20, and playoffs begin the following weekend with quarter-finals, semi-finals on November 2, and the Championship game on November 9. Leading the pack with one game remaining are Queen's at 5-0, Guelph and Waterloo at 4-1, and McMaster and Brock at 3-2. The Gold, Silver and Bronze medalists in the OUA Championship will advance to the CUMRC tournament.

QUEBEC
The RSEQ regular season ends October 27 with three matches including a rematch of the 2018 RSEQ Championship with Bishops Gaiters visiting the league leading Concordia Stingers. With two games remaining, the 4 playoffs spots are still undecided, with 5th place Ottawa trailing Bishops by a single point for the last playoff spot albeit with Bishops having a game in hand. The two semi-final matches will be played on the weekend of November 2, with the RSEQ Championship the following weekend. Dates and times are still to be determined. The two QUEBEC berths will be host Concordia plus the highest finisher in the RSEQ Championship.

It's a while off but the MLR season starts on February 8th, pushed back a bit from last year. The season ends in June. Seattle open on the road in San Diego and Toronto are on the road in Austin. The first home game for Seattle is Feb 22nd against Toronto.

Two big preseason matches in Seattle in January, the first on January 16th against the Vancouver Island Crimson Tide which should include good representation from the Pacific Pride and other Island clubs. The second against Mitre 10 Cup team Tasman Mako on January 26th.

It's a bit of late news but the Toronto Wolfpack have stirred things up a bit in Rugby League winning promotion to the UK top league, the Super League. You can read the viewpoint from the Guardian at the link below.