It's that time of year again for the Bermuda World Classic tournament. Round one saw Italy just nudge Canada at the whistle (report below) and the Pumas dominate France 40-8. Canada will face France next in the Plate round while Italy will play the Pumas in the Cup round. In the other pool play starts Monday with USA v Ireland and Lions v Springboks. 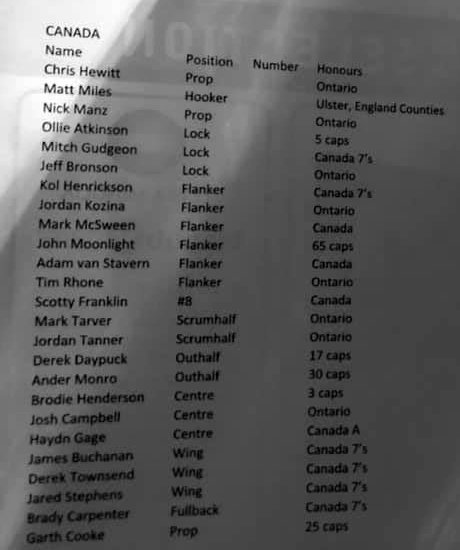 Battling back from a 17-5 deficit at half-time, Canada fought back during a topsy-turvy second-half, to hold a 22-20 advantage heading into added time with victory seemingly secured.

However, their anticipated celebrations were ultimately dashed as Italy struck a decisive penalty deep into added time with the last kick of the game to snatch victory.

“The last second penalty awarded against us came incredibly late and we’re extremely disappointed in the manner in which it came about,” Jonathan Goldie, the Canada coach, said.

“We felt we had done enough to win the game and so to lose in that way is very hard to take.

“It was a very close game obviously. The guys had a very slow start but we fought our way back into the game in the second half and showed how strong a team we are.

“We are obviously gutted but we will come back in the next game and build on the positives. I felt we showed we were the better side and the guys can certainly have their heads held high.”

After a fairly even start to the encounter, Italy broke the deadlock in the ninth minute through Ramiro Pez’s simple penalty, taking the score to 3-0. That advantage was extended in the fourteenth minute as Italy scored the opening try of the match.

A brilliantly executed driving maul deep into Canada’s half resulting in hooker Davide Giazzon crashing over in the right corner. Pez made light work of the conversion giving his side a 10-0 lead.

The set back appeared to jolt the Canadian’s into life as Tim Rhone was denied a try with a last gasp tackle, before his side finally reduced the deficit in the nineteenth minute. The ball was worked out to the right-hand side, where it found wing Jared Stephens to bundle over in the corner. Rhone failed to add the difficult conversion, leaving the score at 10-5.

However, it was Italy who finished the half in the ascendancy with their physical advantage again proving decisive in the closing moments as another driving maul resulting in another try for Giazzon. Pez’s conversion flew between the posts taking his side into the interval with a 17-5 advantage.

Canada returned to the field and quickly set about imposing themselves on the Argentina defence. Their efforts paid off in the 41st minute as a brilliant tackle by Flanker Adam van Stavern saw possession find its way to the hands of Mark Tarver, who evaded two tackles before handing off to Derek Townsend to charge over. Rhone made no mistake with the conversion as the deficit was cut to just five points.

Building on that momentum, Canada overturned the deficit completely just six minutes later with their third try of the evening. Kol Henrickson broke through the Italian defensive line before racing clear to score. Rhone again added the extras to give his side the lead for the first time with the score at 19-17.

It was an advantage that did not last long, however, as within two minutes Italy went back ahead through another Pez penalty giving his side a 20-19 lead with ten minutes remaining.

Back came Canada with a penalty of their own courtesy of Rhone to snatch back the advantage in the 53rd minute, setting up a thrilling finale.

As the clock ticked into added time Italy gained a line out deep into Canadian territory as they aimed to set up a final play. Keeping possession, three phases of play followed before Italy were handed a golden opportunity to claim victory with a penalty awarded 25-yards out in front of the posts much to the disbelief of the Canada bench.

As everyone inside North Field held their breath, Pez proved the calmest man in the vicinity, striking the ball sweetly through the posts to snatch victory and send the Italian bench into rapturous celebrations.