[editor's comments and photos below]

The national 7s team held a warmup tournament on Sunday which puts them ahead of last year's schedule when the team were involved in a labour dispute and went into Dubai without any competitive match preparation. Last year the team went 2-3 at Dubai and were out, only defeating Japan and Zimbabwe.

First up kudos to coach Henry Paul for utilizing the resources on hand and creating the opportunity for the next generation players to test themselves against the best while putting the message out to the incumbents that their spots have to be earned. It's refreshing in Canadian rugby to see that attitude, it's certainly not apparent in the national XVs program. Feedback we're hearing is that Henry Paul is communicating with a larger pool of players and building some depth in the program, an encouraging sign.

We took 776 photos and published 58 of them, the photo gallery is here. We'll go through our favourite 10 below that tell a story.

D'Shawn Bowen scored perhaps the most impressive solo try against Canada. As expected there weren't a lot of tries scored against the national 7s team, I'm guessing four over four games and they shutout the Pride in the first match. This was the rematch and D'Shawn out legged Josiah Morra from a distance, impressive when you consider Josiah is probably top 3 in speed on the national squad. D'Shawn, from Kingston Ontario, played in the BC Premier in 2015 for Westshore as he was trying to make the Canada U20 team in that year. We saw his name on the long list in October 2015 but not on the one in December 2015 after Andrew Coe and Theo Sauder were added. Now he's with the Pacific Pride and looks to be hitting his stride under Jamie Cudmore's tutelage. On our "one's to watch" list.

For the national squad Adam Zaruba stood out for me, not only scoring a lot of tries but his intensity on attack and defence was outstanding. His mind certainly seems to be in the right place going into Dubai and the beginning of the world 7s series. Also interesting in the background, three former Canada players, Tony LaCarte, Jeff Hassler and John Tait studying the play in front of them. Tony now pursuing his firefighting career was helping to coach the BC team today, Jeff Hassler perhaps still a current national team player and John Tait now in charge of the national women's programs both 7s and XVs.

After three halves of play the first try against Canada was by BC, Aaron McLelland, no surprise there as many have seen his abilities and have expected to see him in Canada colours at one point. He plays for the UBCOB Ravens but BC were wearing CW colours today. The story behind that... apparently BCRU HQ staff sent over the youth jerseys instead of the senior men's, sizes were wrong and that was only discovered before kickoff. Where can you find a set of jerseys at the last minute, the hosting club. Note to self and Lionheart Sports, carry around 12 BCRN jerseys in the trunk of the car, you never know when they'll come in handy. As for why Pacific Pride and Canada were wearing Pacific Pride jerseys of a slightly different shade, no idea.

Probably the best photo from an action point of view, Anton Ngongo returning from injury and showing his potential. He also scored a try against Canada and is likely one of the players close to breaking into the national squad. Adam Zaruba on the tackle was everywhere and got a lot of playing time.

It was good to see Henry Paul utilize the plethora of local resources available to him with this tournament. He's continuing his predecessors practice of scoping out the BC Premier games as well, especially with the Pacific Pride now part of the league. Adam Zaruba again on defence with a high tackle on a dipping player, so easy to do but always a penalty now. No doubt valuable feedback on this in a warmup tournament will pay dividends in the world 7s series. Looks like the national team bench knows a penalty coming and Cooper Coats especially feeling the pain.

This photo sequence has to be viewed in the right sequence to be appreciated. BC player JC Fidinde, from France who now suits up with JBAA, has developed an interesting strategy to avoid being tackled in the air or more precisely when immediately landing. At the international level, in both XVs and 7s, we've seen the importance of the aerial game, recovering the ball and winning that aspect of the match. In 7s it's only brought into play during the kickoff but in XVs it's throughout the match.

Jake Thiel taking a very strong, low tackle stance, no way young Quinn Ngawati is going to power through that so he passes to the outside. Quinn's sister, a top rugby player in her own right, looking on in the background. Jake Thiel has rapidly improved over the last year, growing in confidence and as he gets more quality playing time, he looked very good in XVs when he played #8 for the Pride against UVic - like to see what he could do as a loose forward, perhaps #8 at the national level.

Adam Zaruba again showing that intensity during the day, this time in defence. Alex Russell who suited up for BC in the match but is on the Pacific Pride squad, maintained his focus while trying a grubber on the run under pressure and it almost worked with Aaron McLelland just a bounce of the ball away from scoring his second try on the day. Interesting to note in the background Jim "Mother" Hubbard back as the Pacific Pride manager.

A rising star in the referee world Julianne Zussman was named to the World 7s series for this coming season. This was a good warmup tournament for her as well and we wish her the best on that journey.

It's good to see 7s coach Henry Paul using local resources to get his national squad some game time and at the same time take a look at the talent on offer from the Pride and BC players. Budgets are tough right now for the national and provincial organizations so this type of thinking is fiscally responsible (think back to the men's XVs levying a registration tax to raise $450K to prepare for the RWC repechage).

The original schedule is below, BC show as having 2 teams but in reality it looks like they'll have enough for one team. Now that the University 7s qualifying tournament on Friday at Trinity Western has been postponed to a TBD date they might be able to pick up some UBC and UVic players. Although the UVic Vikes XVs team has a qualifier against Calgary Dinos on Saturday at Trinity Western and that's still a go.

The BC team is an interesting selection, some young players like Zephyr Melynk of Nanaimo who will be looking to make the Canada U20 team this year. Peyton Eager who spent a season with Frankie Horne's 7s academy in South Africa, Peyton has gone from Cowichan, to Nanaimo and is now with Westshore. Brandon Schellenberger of CW a former Canada U20 scrum half, Spencer Jones who plays for Westshore and the Toronto Arrows, Kyle Baillie who has also played with Westshore and with New Orleans of the MLR. Baillie had a rough World Cup for Canada picking up an injury and never playing to his top form. Also joining the team two UBCOB Ravens Aaron McLelland who has played for Canada A (the Maple Leafs) in 7s but was never fully capped with the national team and Colby Mason who is a beast in XVs in the centres and is most reminiscent of John Moonlight in size and style. Johnny Frankin the Caps flyer joins the squad along with a couple of James Bay players Mike Nieuwenhuysen and JC Fidende. Sion Griffiths is another young player from Mill Bay who went to Brentwood College, he played for the BC U18 team in 2018 and the BC U19 XVs team this summer. It's a talented looking team but obviously not much practice time.

The rosters are posted below.

Preliminary Schedule (at Windsor Park in Oak Bay)
[ed. NOTE: a later version of the schedule omits the 3:00pm match as there is only one BC team and one Pride team.] 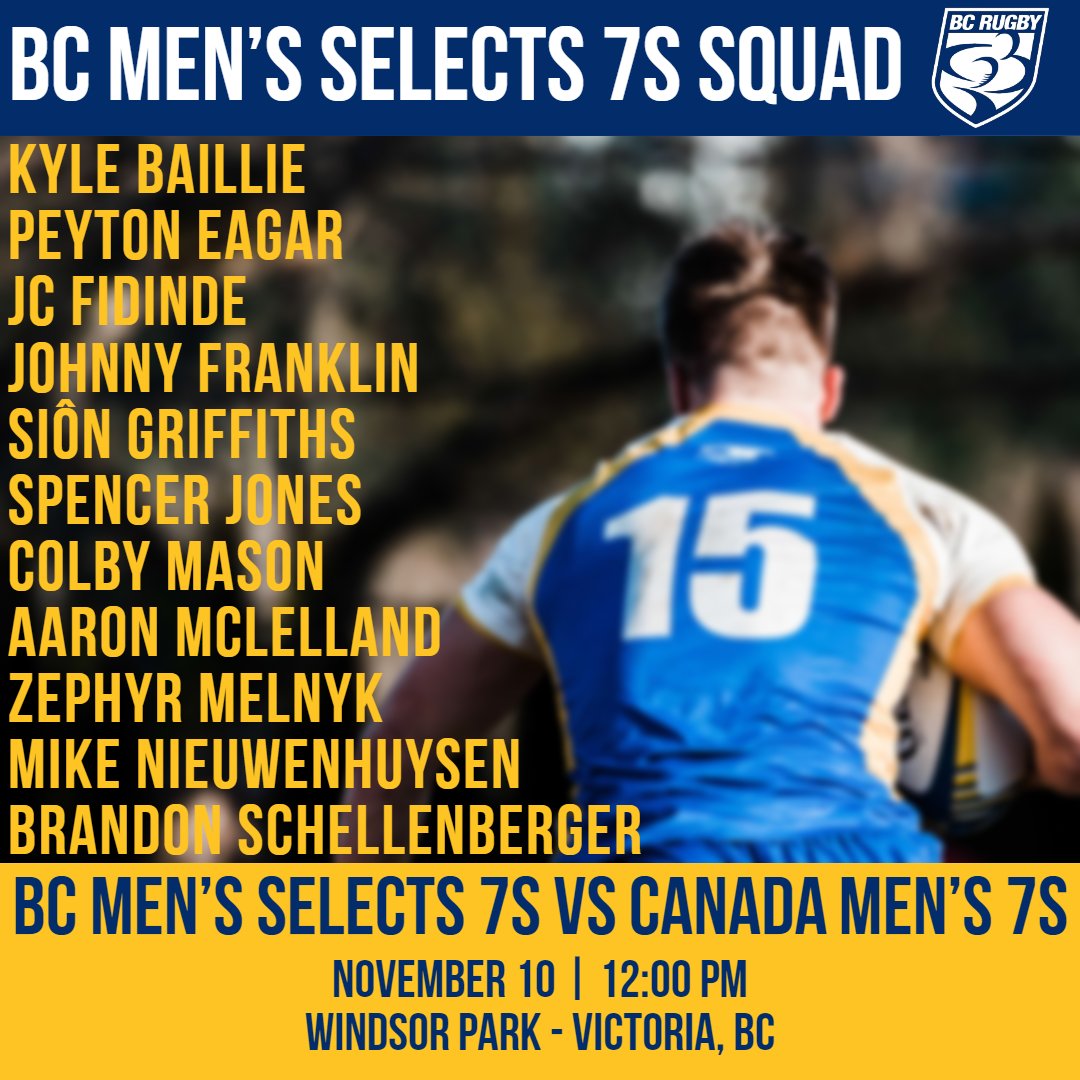