Canada ended their California tour with two wins in the World Youth Rugby Festival against two South African touring sides. The two sides are part of the Blue Bulls Academy program, one named the Kudu and the other Nyala. Both South African sides are U19 according to their tour facebook page.

The matches against the South African sides were part of the World Youth Rugby Festival. They have archived video of their tournament on Youtube, unfortunately Day 4 which included the Canadian matches isn't showing yet. The link is here. 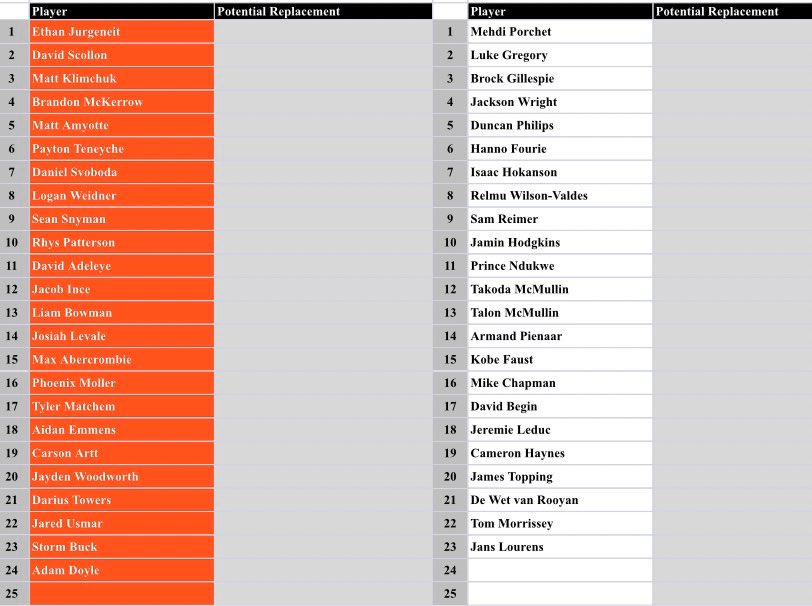 Canada and USA are very close in playing level at the U18 age group, witnessed by four games that finished with differences of 8, 5, 7 and 2. With Canada winning two and USA winning two. USA Blue ended up going 2-0, Canada White and Red both 1-1 and USA White 0-2.

Canada Red started the day with a 33-25 win over USA White. Canada were behind at the half 20-14 with tries by Phoenix Moller and Matt Klimchuk, 2 converts by Max Abercrombie. Canada came back in the second half to outscore the USA 19-5 and reverse the trend from the first two matches. 2nd half tries were by Jacob Ince, Josiah Levale, Rhys Patterson with converts by Max Abercrombie.

Canada White faced USA Blue next and went ahead 10-3 with a try by Prince Ndukwe, convert & penalty from Jamin Hodgkins. The USA outscored Canada in the second half 24 to 12 for a 27-22 final. Second half tries were by Prince Ndukwe and Luke Gregory with convert by Talon McMullin.

One of the interesting stories from Day 2 was two Canadian parents live streaming the matches on their own. The following was a post on the Rugby Canada facebook page from one of the parents, Dirk Snyman.

Hi there, We are the proud Canadian parents of the under 18 Canadian team playing against the USA team in San Diego today. December 31st, 2019. Due to the fact that USA do not have live streaming there today, we have set up an ad hoc live streaming attempt for our Canada based parents. You are most welcome to share the following link with your parents of the USA team. Hopefully this will help everyone who are far away to also enjoy their child’s achievements We are happy to share with both USA and Canada rugby families and supporters https:www.youtube.com/…/UCmWcvHKulHQYJb3QZwEH… Regards the Canadian Rugby family to the US Rugby family GO Canada !! 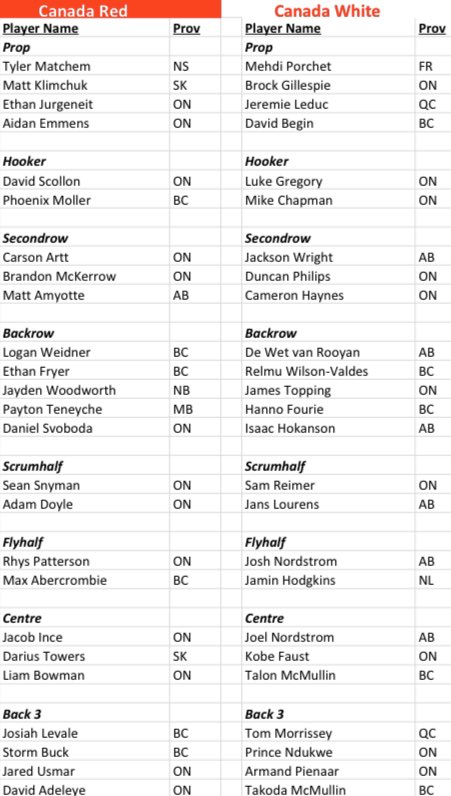 Canada’s Under-18 Men’s head coach Mike Curran has named the squad that will travel down to California for the December tour to close out 2019.

The group will be split into Canada Red and Canada White and play two internationals against USA Blue and USA White on December 28th and 31st. The teams will then head to Los Angeles for a scrimmage each against the Blue Bulls Academy Side in the World Youth Festival on January 3rd.

The tour pulls together athletes from across the country, identified through regional camps and provincial competition throughout the year and gives them the opportunity to be tested at the international level.

“The U18 level is a critical step in exposing players to the demands of international rugby,” said Curran. “Players will be tested in the way they prepare, play, and review.”

The U18 program plays a critical role in the national team pathway, staying aligned with Under-20 and Senior program objectives as they look to develop athletes with Senior National team aspirations.

This tour will play a role in selection going into 2020, giving athletes an opportunity to put their hand up for age-grade national team play in the new year.

“Next year, the U18s will select a single side to compete in the international festival in July at Brentwood College, teams are still being confirmed. The goal is to have a significant number of the players transition to the U20s for a two-year process.”

As of now there will be no live streaming options available, but half time and full time scores updated on Rugby Canada’s social media channels with live updates on USA Rugby's twitter feed.