The match was basically over 20 minutes in as the Seawolves capitalized on a nervous start from the Tide and were up 22-0 before anyone had a chance to go for their second beer.

The Seawolves Twitter feed described a nervous Tide team who made many mistakes in the opening minutes, biting on a dummy pass, inaccurate kicking, offside penalties, turnovers, overthrown lineouts all which seemed to be punished by scores from the home team.

The score at the half was 36-0 and a thumping looked on the cards.

Tide had some chances in the second half but Seattle kept them out. A play in the second half summarizes the Tide effort, they had a lineout inside the Seattle 10m, their lineout wasn't working well in the game, instead of going for the high percentage throw to the front, they went to the back, overthrew the ball and Seattle ran it back 50m and then several plays later scored a try.

For Seattle names that showed up often were Hattingh their #8 and the new centre from the English Premiership, Ross Neal.

From sources at the match, the Tide players who stood out, James O'Neill and Siaki Vikilani in the forwards and the two scrum halves Crosby Stewart and Brandon Schellenberger. The Tide played hard in the last 15 minutes and Peyton Eagar turned a ball over and through replacement prop Bryce McKinnon and loose forward Ed Ilnicki were able to bring it to the Seattle goal line but the Tide were unable to convert.

In terms of what's to learn for amateur players wanting to go to the next level, do the simple things well, it's about precision.

The Tide won't see game action again until the regional McKechnie Cup, which was in May but now may be moved to September, but hope to continue training together throughout the year. The Seattle Seawolves will host the Tasman Mako from NZ next weekend and then they'll start the MLR season hoping to claim their 3rd straight title.

Attendance at the exhibition match was estimated around 2,500.

The Tide have lost a number of players from the squad named just over a week ago, gone are backline players Noah Bain, Logan Martin-Feek, Mike Nieuwenhuysen, Anton Ngongo, Brennig Prevost, Josh Thiel and loose forward Nathan Stewart. Reasons vary from work scheduling, university scheduling, visa issues and insurance issues. It's not an easy task assembling an amateur squad mid-week for a cross-border road trip so kudos to Tide organizers for persevering.

The backline is hit hardest, gone are the two flyhalves, the starting inside centre, wing and fullback. Coming in as replacements are Thomas Isherwood, Reid Watkins, David Devillers, Ty Benson in the backs and Ed Ilnicki in the forwards.

The forwards remain a strong group, the Tide are starting 4 props in the tight five. Obviously expecting a big battle up front against the likes of Canada players Djustice Sears-Duru and Jake Ilnicki. Two players originally from New Zealand start at props, John Braddock at loosehead and Tom Scanlon at tighthead. Braddock is Canada eligible. Nico Krawczyk slides from his usual loosehead position to start at hooker. In the second row, Quinn Horton who can also play prop brings his bulk to the engine room, Tyler Symon-Burke who plays at Westshore this season via the Hurricanes Development program in New Zealand is a mobile player and almost another loose forward. Carter Filion provides cover at second row. Foster Dewitt covers hooker/loosehead and Blake Van Heyningen covers tighthead.

The backrow of James O'Neill, Mason Flesch and Siaki Vikilani are former or current Canada U20 players. All three of them are capable of breaking into the senior squad this world cup cycle. The backrow is one of the strengths on this side and they'll likely be required to put in a lot of work against a professional outfit like the Seawolves. Backing them up are Peyton Eagar and Ed Ilnicki.

Crosby Stewart starts at scrum half with Brandon Schellenberger given the impact player role. Thomas Isherwood gets the start at flyhalf, a big ask for the young Pride player who usually plays wing or fullback. He's being groomed by the Canada U20 coaches at flyhalf and started there in the Canada U20 intrasquad match so they'll be keenly watching his performance. It's definitely a jump into the deep end but a great way to see if he's ready as a #10, if he can handle the pressure of the two time MLR champs, he'll be ready for international U20 matches. I expect Reid Watkins, who is a talented scrum-half, will provide cover across the backline including flyhalf. Taylor de Souza will cover in the centres and David Devillers will cover the back three.

In the centres big Mua Uluilelata starts at the inside, he has the size to handle the physicality expected from the Seawolves, outside is Gabe Casey, another recent Canada U20 graduate looking to prove himself at the senior level. On the outside the only senior capped player, Kainoa Lloyd, will be one of the Tide's attacking weapons. The other wing is Ty Benson, called up from the Division One Cowichan side. Ty played for the Tide in 2019, this will be a big step up in level for him. A great chance to get noticed if he can perform well against the likes of Jeff Hassler and the other outside threats of the Seawolves. He'll likely be going up against another Cowichan player currently playing for the Seawolves, George Barton. At the back is Sam Reimer a utility back from Nanaimo.

Last year the score was 48-7 with the Tide only managing one score against the Seawolves. That will be the measuring stick of whether the Tide has improved this year. The conditions will be frigid, at the time of writing all ferries to the mainland have been cancelled and the team has to go to Plan B which is to catch the ferry tomorrow morning to Seattle. Travelling with the team is Pride coach Jamie Cudmore. Coaches are Nanyak Dala and John Buxcey. 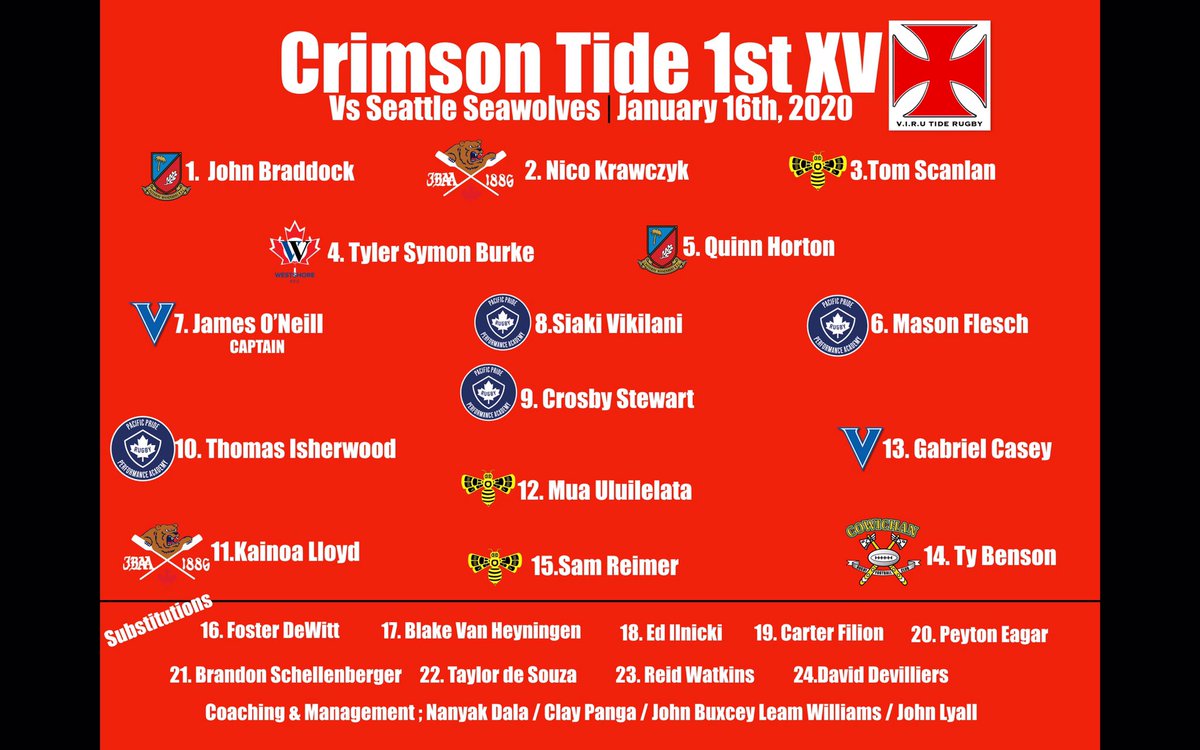 It's an interesting squad heading down to Seattle next week to take on two time defending champions, Seattle Seawolves. Last year in Victoria the Seawolves prevailed 48-7. The complete story, rosters and match video from that game can be viewed here.

There are 7 players returning from last year, John Braddock, Foster Dewitt, Blake van Heyningen, Nathan Stewart, Crosby Stewart, Brandon Schellenberger and James O'Neill. This year's squad has more depth to it, a good example is Brandon Schellenberger who had to play centre last year although he's really a scrum half. This year he'll be able to play #9, along with Crosby Stewart from the Pacific Pride. Last year Crosby was pressed into action on the wing.

The team feels more prepared this year, it's not saying the result will be different as the Seawolves have also improved with added talent but it should be an entertaining match that will give the MLR champs what they want, a good, hard match to kickoff their preseason.

In the second row look for Quinn Horton and Carter Filion along with Tyler Symon-Burke who is a former Hurricanes Development player spending this season at Westshore.

Loose forwards will include Nathan Stewart the CW captain and Peyton Eagar who came up through Cowichan, North Island Tsunami, Nanaimo and is now at Westshore. Peyton is one of several players on the squad who also have been part of the Thunder Indigenous Rugby program. James O'Neill the former Canada U20 player currently at UVic is a rising star, on the radar for national team honours this world cup cycle most likely. He also was part of the UVic Canadian University championship side this season and was selected as openside for the All Star team. Mason Flesch and Siaki Vikilani of the Pacific Pride round out the loose forwards, again they're on the radar for national team honours down the road. It's a good looking set of loose forwards that will make the Seawolves work at the breakdown to retain possession.

Scrum halves as mentioned Brandon Schellenberger and Crosby Stewart, both snipers around the ruck. Flyhalves will be Martin Logan-Feek another UVic player who was selected for the All Star team at the University Championships and Josh Thiel who has one cap for Canada, he was rumoured to be heading to San Diego of the MLR this season.

The centres look solid with two Canada level players, Kainoa Lloyd with 11 Canada caps likely at outside centre and Mike Nieuwenhuysen, capped at the Canada A level, likely at inside centre. Taylor de Souza, another player with the Thunder Indigenous program, comes from Ladysmith on the North Island and is currently playing with Nanaimo. Mua Uluilelata is a big Pacific Islander currently playing with Nanaimo as well. Gabe Casey from UVic on the Canada U20 team last year has some pace.

Lots of pace in the back three with Noah Bain, Anton Ngongo and Brennig Prevost. A couple of utility players who can cover a wide number of positions, Foster Dewitt can cover hooker, prop and loose forward and Sam Reimer who can cover most backline positions including scrum-half.

It's a team capable of giving the Seawolves a good pre-season match in preparation for larger fish the week after, when the Mitre 10 Champions, Tasman Mako come to town on January 26th.

[ed. photos of the Tide Trial match from Sunday can be viewed here.]