A huge tournament for Canada that checked off a number of boxes, first top 3 finish of the season, first time they medalled at their home tournament, first time they knocked off Fiji and South Africa in the same tournament. There were new attendance records set with almost 40,000 in attendance each day. There will be smiles all around in the Canadian rugby community, among the players and at HQ.

We'll have more on the tournament during the week. As Nate Hirayama said during the postgame interview, "it was fantastic".

According to World Rugby announcers it was the first time in 7 years that Canada has defeated South Africa. Justin Douglas started off the scoring in the first minutes with a nice offload by Isaac Kaay. South Africa replied twice to go into the lead but Canada scored at the half time whistle on well worked team try with Harry Jones crossing the line. Canada got the first two tries of the second half, Justin Douglas at 9' and Nathan Hirayama at 12' before South Africa clawed their way back at 13'. Canada were able to hold on and claim their first medal of the season and the first time they medalled at their home tournament.

It was going to be a tall order to take down an undefeated Australian side and Canada were a few blades of grass away from achieving that goal. Australia were ahead by 2 tries going into the final minutes. Harry Jones had scored at 5' but Australia answered with three tries before Mike Fuailefau scored at 13'. Canada were on attack inside Australia's 10 metres with time expired and Theo Sauder lunged for the line after evading a couple of defenders. It went to TMO and there was barely a few blades of grass between the ball and goal line but it was a fraction short of the line. The whistle blew and Canada would go onto the Bronze match instead of the Gold.

Tries by Lucas Hammond 2', Justin Douglas 12' and Theo Sauder 14' plus 3 for 3 on conversions from Nate Hirayama were enough to put away a resilient Spanish team in the Cup quarter-finals

It's the first time Canada has topped their pool at the Vancouver 7s and only the second time they've made the Cup round. Canada's quarter-final opponent will be Spain a team Canada has had success against. In the other quarters it's South Africa v USA, NZ v Fiji and Australia v England.

Canada are playing well, their offload game, patience and ability to retain their ball at the breakdown is paying big dividends. Theo Sauder is stepping up his game as he gains confidence on the circuit, he brings another dimension both in attack and on defence with the tenacity and speed to track back on defence, something that Canada has missed. Isaac Kaay is embracing the contact and offload game, Justin Douglas is playing well as are the "core" players Hirayama and Jones. Lucas Hammond is making an impact at key times as well. If Canada can keep their error rate low and maintain their current game plan they should get by Spain and then they'll likely face Australia in the semis. Canada kickoff against Spain at 12:25.

Hirayama opened the scoring within 30 seconds with a strong offload from Isaac Kaay. 5-0. A Wales pass goes to ground and Harry Jones jumps on it, 10-0. Isaac Kaay scores next with Fuailefau providing the offload pass, 15-0. Pat Kay ends off the half with a solo effort under the post, 22-0. Hirayama starts the second half with a yellow card as he blocks a Welsh player on the chip and chase. Wales score a try with 2 minutes left, 22-7. Theo Sauder finishes off with a solo effort picking up a ball thrown away by Isaac Kaay and beating two defenders, 29-7.

Canada again had an electric start with Theo Sauder finishing off a Pat Kay break to score within 15 seconds, 5-0. Fiji struck right back after Coe missed his one on one tackle, 5-7. Trainor looked like he would put Canada ahead but he didn't have the pace to finish the line break, Coe got close but was stopped short of the line. Pat Kay made a critical steal at the breakdown and eventually the ball found its way to Theo Sauder who scored his second, he's gaining in confidence and becoming Canada's finisher. Fiji came back just before half as Kay and Kaay mixed up their defensive coverage and neither attempted a tackle on the player, 12-14 for Fiji at the half. Justin Douglas and Mike Fuailefau came on, Trainor and Sauder went off. Fiji picked up a yellow for a tip tackle and Canada took advantage with a Braid to Kay pop pass from a ruck just outside the Fiji line, 19-14 with a minute and a half left. Hiryama comes on as a sub and places the perfect kick off that connects with Justin Douglas to put up another seven, Fiji answer back but Canada win 26-21.

Canada had the perfect first half, France received a yellow 20 seconds into the match and Canada made them pay with a couple of tries. Braid set up Hirayama flipping a ball up after the tackle, 7-0. From the restart Harry Jones times his jump perfectly and Canada win possession, they patiently work the ball back and forth across the pitch before Lucas Hammond spies a gap and takes it in on a solo effort, 14-0 with four minutes gone. France are back to full strength but the onslaught continues, Canada win the restart and Kaay, Braid and Jones team up for another try in the corner, 19-0, with 50 seconds left in the half. France are stunned and let the kickoff bounce, Berna says thank you and runs in a fourth try at the halftime whistle. 26-0.

Coach Paul makes changes and brings in Conor Trainor for Isaac Kaay. France turn the ball over at the breakdown and find Canada's defence stretched, 26-7. Fuailefau, Kay and Coe now come on for Canada, it looks like Douglas, Hammond and Jones are off. Trainor gets caught with ball inside his 22, Coe comes into the ruck from the side and France get a penalty. Veredamu for France gets the ball 5 metres out from the line and just muscles past Trainor and Fuailefau who can't bring him to ground, 26-14 and a nervous 4 minutes left to play. Connor Braid steps up big time and scores a solo try when Canada were fading, 31-14 with two minutes left. Theo Sauder now enters the match. Sauder and Coe team up to hold a French player up in the tackle and Canada get the attacking scrum with 40 seconds left and a chance to pad the important point differential. Unfortunately Berna drops a pass and France go the other way to score a try, Sauder runs down and tackles the break away runner but Fuailefau can't keep up with the support runner, final 31-21.

There's one change to the roster from the LA 7s last week. A healthy Andrew Coe returns to the roster leaving David Richard off the roster. Richard is playing with the BC Next Gen team in the Vancouver Invitational tournament. 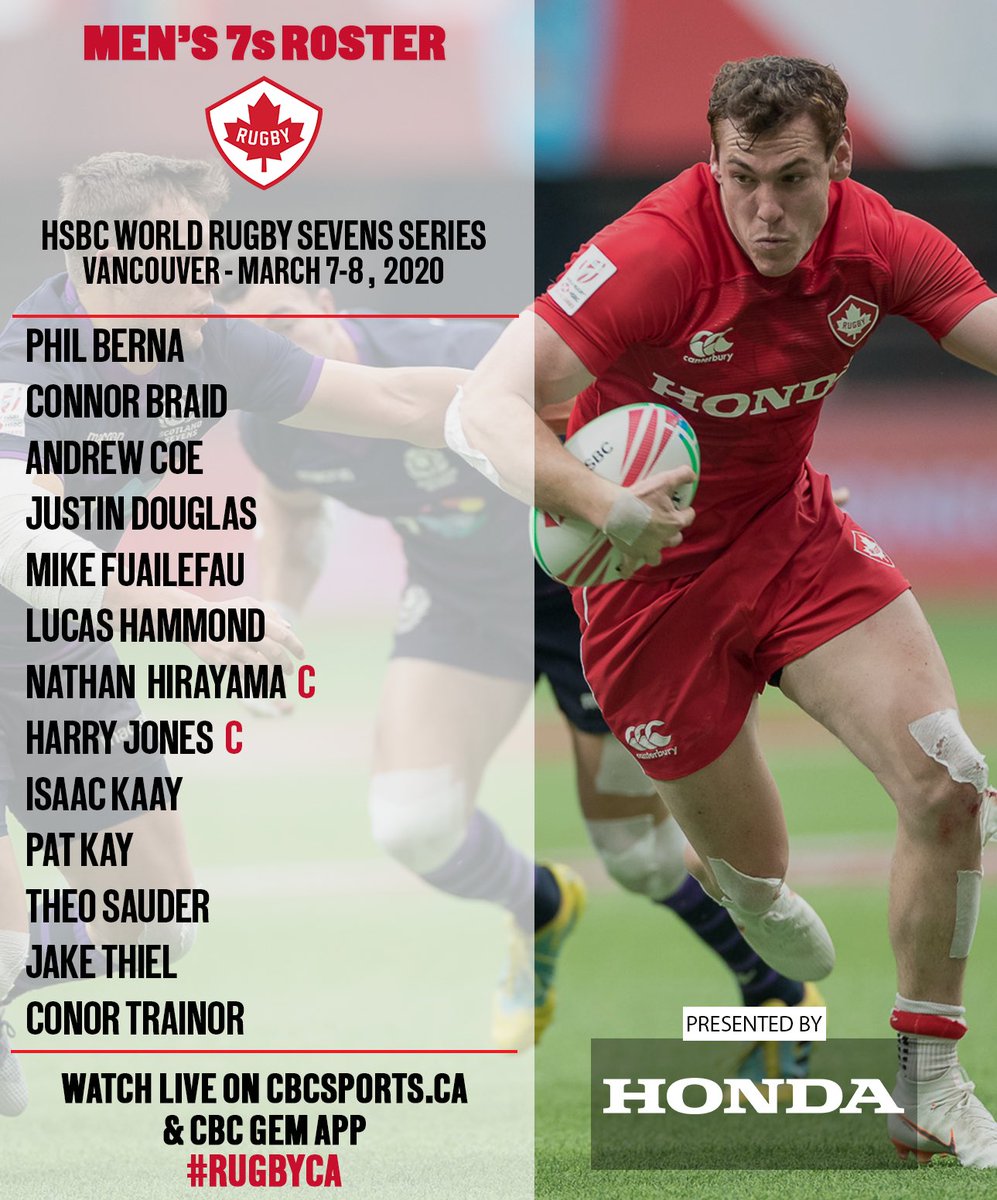