Unless you've been living in the bush for the last week and are just returning to civilization, you know that rugby has been shutdown in the known universe due to concerns around the spread of COVID-19 aka the Coronavirus. This hasn't just hit rugby but every major sport. BC has declared a state of emergency as have several other provinces, schools are closed, some stores are closed, events have been cancelled. If you've been reading the news and following social media there's no point repeating it here. Let's talk rugby.

So the MLR came up with a novel idea to keep their fans virtually engaged. They're going to play online rugby using the software called Rugby 20 on a platform called Twitch. Unless you're a "gamer" this may be a foreign world, it was to me, but a quick example below will get you up to speed. The video below shows a young lad commentating on a game of Rugby 20 he's playing, he's controlling Wales and I assume the computer is controlling Australia.

Watch Wales Vs Australia On RUGBY 20 from TheRygbiGuy on www.twitch.tv
The MLR will pit a player from each team against each other and you'll be able to watch the game and the players commentary as they operate the controls. The Seawolves, for example, have asked fans to choose either Nakai Penny, Mat Turner or JP Smith to take the controls in their match against Austin. Toronto Arrows take on New England as well on Friday evening but no word on who they are choosing to represent them, they could be running an intrasquad Rugby 20 tournament right now to see who has the video game magic. The schedule for the virtual games is below, the link to view them is here www.twitch.tv/majorleaguerugby 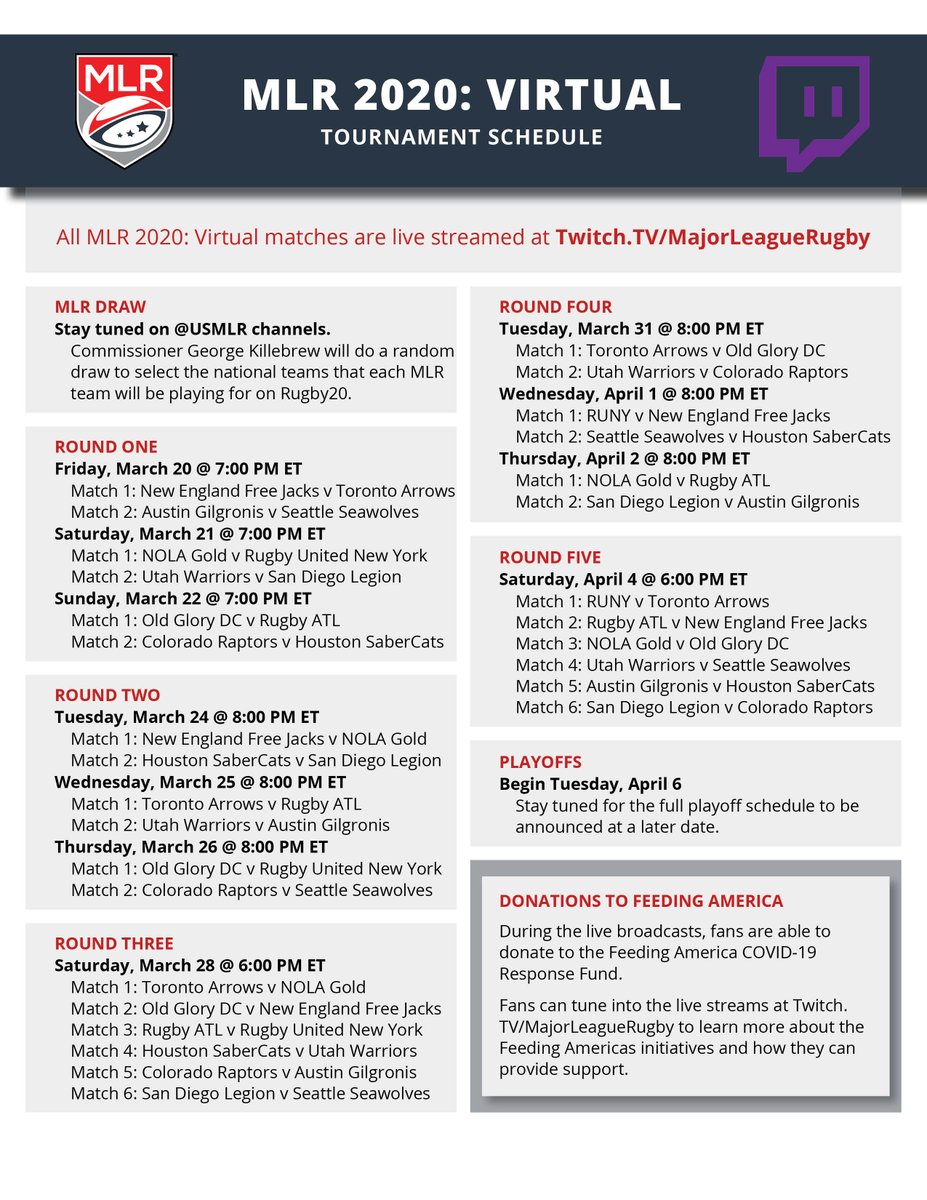 Of course this isn't real rugby but it's an innovative idea to keep the fans engaged until the real deal returns.

eSports Trial by BC School Sports

This brings up an interesting question about eSports in general. Before this virus concern even hit, the BCSS (BC School Sports) announced an eSports trial under their jurisdiction. This wasn't even rugby or basketball or any traditional sport, it was using the League of Legends game. You can read about the details here.

The BCSS has a proposal in front of membership to take over all sports at the school level, eliminating individual sport bodies like the BCSSRU. If that becomes reality then funding from the province will go through one body, the BCSS, and you may see League of Legends getting an equal share of the funding pie with rugby, basketball, soccer, football, and so forth. That's something to ponder.

We're trying our first podcast which is basically this article in audio format. We're testing out the software platform which would allow us to invite guests to interview. We would hope to get some expert guests on here in future episodes, perhaps Jamie Cudmore talking about the Pride, Jeff Williams about the U20 program, lots of possibilities. Also we invite readers to put forth a subject they would like to discuss, email editor@bcrugbynews.com with your ideas.