There was a lot of venting on social media about this vote, the younger generation generally backing Pichot.

Andrew Coe (twitter) "This is unfortunate, I believe a change is needed. Pinchot [sic] has helped with growing the game in Canada through Vancouver 7s and The ARC #TraditionvsRevolution"

I love a good shot on Rugby Canada as much as anyone and they've made a lot of errors over the last 20 years, but this wasn't one of them, in my opinion.

Canadian Rugby does need change but starting with the Chairperson of World Rugby is more symbolic than practical. Whether rugby on the world stage is better served by Pichot or Beaumont is debatable, from a Canadian perspective however Pichot had some question marks. He's from a country that has put little effort into promoting women's rugby. Argentina aren't even ranked in women's XVs which goes to 56 places. Also South America is a major rival for Canada in men's World Cup qualification, a major source of funding. Pichot would likely look after the interests of South America before looking north. Canada seemed to be viewed as America-lite in his conversations. Canada is one of 18 countries to have a vote at the World Rugby Council and that privileged position is due to historic connections to the "home" nations, certainly not based on the men's current playing form. I have no problem with Canada voting Beaumont.

As for the younger generation who are disillusioned by the vote results, it would be good to see some of that energy directed at Canadian rugby politics. When was the last time any publicity was generated over a Canadian takeover of the national rugby organization? 2001, that's when, when the Agents of Change took over the board, replaced the CEO and took a new direction. Neil Davidson wrote it up on CBC Sports. Looking back on the last 20 years they got a lot of things wrong in the change so perhaps in 2021 some of the bright young minds, men and women, can clean house and put Canada on the right track.

All is not bad however in Canadian Rugby, the table below shows when the four world rugby competitions (men's/women's, XVs/7s) are averaged together, Canada comes out at #8 and that's mostly due to the efforts of the women's teams. So in four years when the World Rugby election comes around again perhaps we'll be talking about the new challenger to Bill Beaumont, instead of two old guys from England/France it will be representative of a younger generation, and maybe even with equal gender representation. 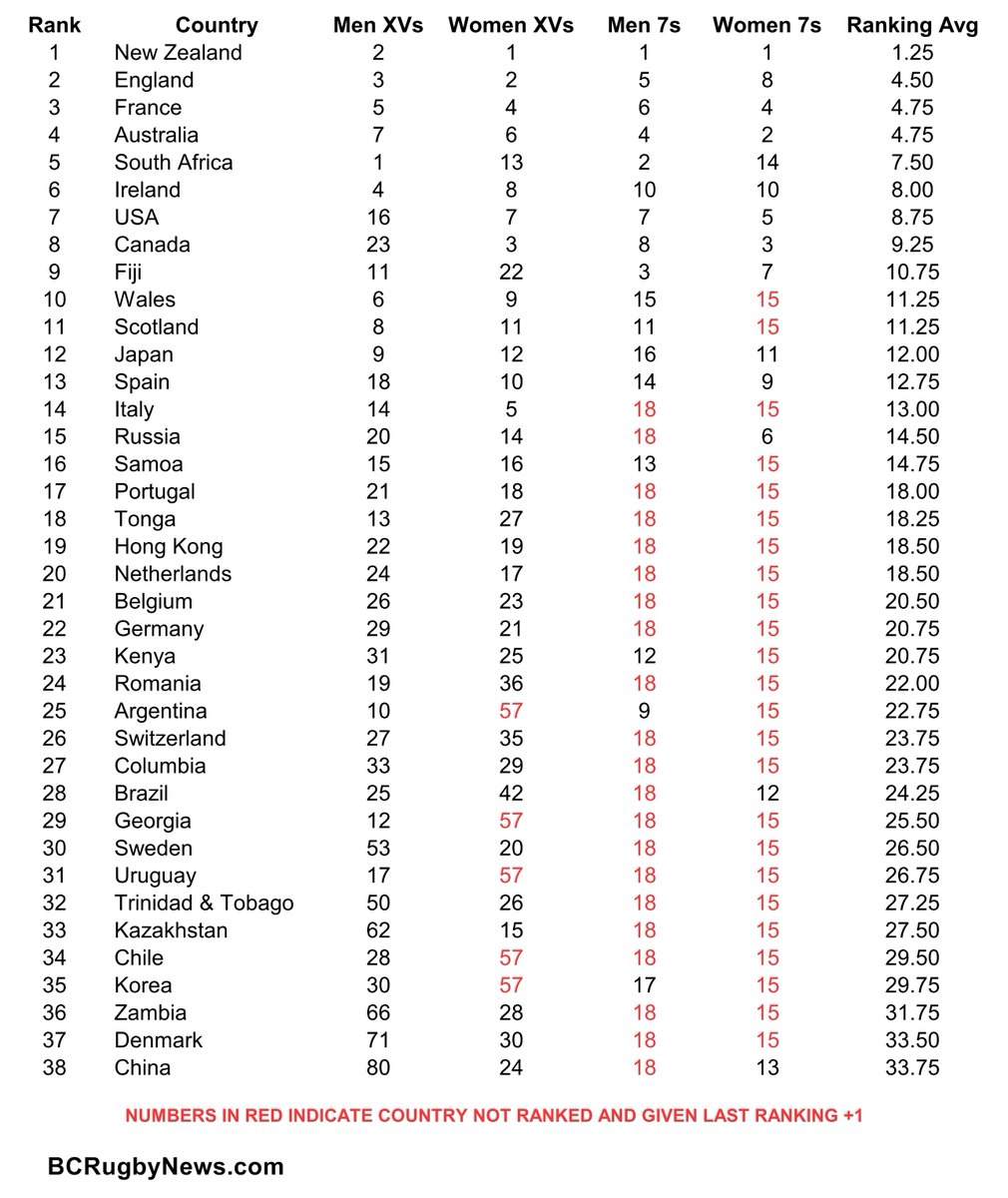 There had been rumours Wales and/or Ireland would jump ship from the Six Nations and Rugby Europe "block vote" for Beaumont. One of those rumours was squashed today when Wales officially came out behind Beaumont for their 3 votes. That backed up an earlier announcement by Rugby Europe with their 2 votes going to Beaumont. If Ireland put their 3 votes behind Beaumont it will be difficult for Pichot to make up the numbers unless Tier 2 countries vote en masse for him, including Canada with their 1 vote.

Asia Rugby polled their members and decided on the majority vote to back Pichot with their 2 votes. Rugby Americas North (RAN) has 2 votes like other regions but apparently won't be polling its member countries to determine a majority vote.

If Ireland officially announce their support of Beaumont over the next few days it would be close to a done deal in our opinion. Canada will announce their support sometime before the May 12th deadline is our understanding but with no firm date mentioned. Our early conjecture is it will follow historical patterns which would be Beaumont.

The Welsh Rugby Union have backed the 'steady hand' of Sir Bill Beaumont over the 'dynamic drive' of Agustin Pichot in the election for the next World Rugby Chairman, the union have confirmed.

On Sunday, voting opened for who will be elected to take the seat as the most powerful man in rugby for the next four years, with the result to be announced on May 12.