My first thought was about the first people, the indigenous people of Canada. In 2013 Phil Mack, John Lyall and myself started up the Thunder Indigenous rugby program. One of my early tasks was to find a suitable logo, I had heard through the Campbell River rugby club of a talented Kwakwaka'wakw artist who had done some work for them in their jersey design, Curtis 'Mulidzas' Wilson. I got his contact info and gave him a call outlining the concept of a Thunderbird and rugby, he did the rest.

There was an event in Victoria he wanted to bring his family to and it was sold out, he agreed to do the artwork in exchange for four tickets to the event. I got online and managed to scoop four tickets from last minute sellers, I met him outside of the venue on the day of the event, I had the four tickets and he had the artwork tucked into a 11x14 file folder. We exchanged gifts and parted ways, we never met again.

The Campbell River community has lost one of its best, according to those who knew local artist, Wei Wai Kum First Nation band councillor and advocate for education, reconciliation and togetherness, Curtis Wilson. Wilson – who was given the traditional name Mulidzas at a Potlach in 2001 – died of a major heart attack last weekend, but he will long be remembered and celebrated by those who knew him. He was known for celebrating his family heritage coming from the four corners of the Kwakwaka’wakw territory: his paternal grandparents from Axwamees (Wakeman Sound) and Wei Wai Kai (Cape Mudge) and his maternal grandparents from Ba’as (Blunden Harbour) and Wei Wai Kum (Campbell River).


He not only created our first Thunder logo and many other impressive works of First Nations art, he designed a Canadian Native Flag, the one we've highlighted in the article. So my first thought on Canada Day 2020 is with Curtis 'Mulidzas' Wilson and his extended family.

I've lived and worked across Canada in my 66 years, Nova Scotia, New Brunswick, Quebec, Ontario, Alberta, BC - I've spent many years in each province and, of course, now on Vancouver Island. It's a great country and I feel fortunate to have found a great community, the rugby community. So before this gets too sentimental, let's get into some Canada Day rugby stories.

This first story speaks to how people around the world view Canadians, especially in the sporting world - one word, hockey. This is from the 2012 July 1st article "Johnny Canuck: A View of Canadians from Abroad - Jebb Sinclair and Mike Pyke Spreading Canuck Lore". The article looked at two Canadian athletes playing abroad, Jebb Sinclair and Mike Pyke, and how hockey played into their caricatures on foreign soil. The cartoon below, from the article, will give you a good starting point. 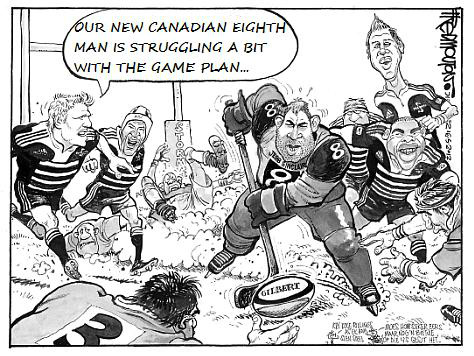 The Williams Lake Stampede rugby tournament is another July 1st story, I went there for two or three tournaments, can't remember exactly as the memories are a little hazy but anyone who has been to the tournamet will understand. I still have two belt buckles from the possibly three attempts, this is the 2006 July 1st notice I put out, "Editor on sabbatical until July 3" Good memories and a great BC and Canadian rugby tradition, we miss you Williams Lake.

The next story that shows up is from July 1st 2017 and is not the most pleasant memory but it's part of our Canada Day rugby history. It's a chance to reflect on the errors we've made and celebrate our resilience and the changes that need to be put in place. This was the July 1st match between Canada and USA, the second qualifier for the 2019 World Cup. We had tied the Americans 28-28 in Game #1 and it was all to play for in California. It ended up being the largest loss for Canada against the USA in our 58 game country vs country rivalry. It was during the brief tenure of Mark Anscombe as head coach. The Americans went on to the 2019 World Cup as Americas #1.

Another July 1st story was from 2015, the CRC was beginning to wind down in its importance to Canadian rugby. The Wolf Pack won the tournament that year and the final games were played on July 1st in Calgary. The BC Bears came 3rd.

This year everyone is a little numbed by the COVID-19 pandemic, there is no rugby July 1st 2020. One of the Canada Day weekend traditions in BC is the Provincial Regional Championships (PRCs) for U14, U16 and U18 athletes. Perhaps a good way to end this article is to review the recent PRC tournaments and look forward to seeing the tournament restart in 2021.

Have a good 2020 Canada Day everyone - stay safe and healthy.