Kira first came on our radar in May 2019 when the BC High School Girls' XV championship took place at Brentwood College. Kira, playing #10, for Robert Bateman lit up the field with 4 tries in one match and it was easy to see she had that special X factor to take her far in rugby. She spent her last year of HS with the Rugby Canada Academy in Langford. Now she's starting at UVic under the direction of coach Brittany Waters. Good luck Kira.

The Canadian Rugby Foundation manages about 50 rugby funds and the John Cannon Memorial Fund is one of those funds. You can see a list of the CRF funds here and there's a secure online form that allows you to make a tax deductible donation to the fund of your choice.

VICTORIA – Even though the fourth annual John Cannon Memorial Fund was handed out on the Island this year, the award still hits close to home for the first University of Victoria Vikes recipient.

The Abbotsford product played for Peter during the Provincial Rugby Championship at the U16 level.

"I've had a great relationship with Peter for a few years now and was really excited to win this scholarship for a number of reasons. I hope I can live up to the great names that have earned this recognition before me," said Peary.

The John Cannon Memorial Fund was first handed out in 2017 after Peter's son, John, who passed away at the age of 35 the previous year. A local legend, John was one of the greatest rugby players to emerge from Abbotsford. Each year, the award is given out to a talented, Abbotsford rugby player to pursue their ambitions.

Peter was one of the coaches that contributed to Kira being the force on the pitch she is today.

Growing up a gymnast with an affinity for skip rope, Peary got encouraged to try out for the Grade 7 rugby team at Clayburn Middle School by her dad, who had coached rugby at the school.

"I didn't think I was going to last," Peary recalled. "I remember I had no idea what was going on, but I loved the challenge of something new, so I kept with it."

Two years passed as she progressed, evolving from a winger into a scrum half and fly half. She suited up for the Elite 7s program in Grades 9, 10 and 11. She also had the opportunity to tour with the Celtic Barbarians. In her sophomore year at Robert Bateman Secondary, she was requested by Rugby Canada to fill out an application for the developmental program. Peary was accepted and moved to Langford for her Grade 12 season so she could train seven days a week with the Rugby Canada Developmental Academy.

"Kira is an up and comer in our program. She's benefited from great experiences with Rugby Canada and it shows. She's a very hard worker, passionate, skilled and we are looking forward to seeing what she can do in our program," said Vikes Head Coach Brittany Waters.

Even though she has trained nationally with the 7s program, Peary still plans to be a fixture on the Vikes' 15s roster, along Waters' 7s, and a major contributor once Canada West action resumes in the future.

"I love rugby. It's disappointing not playing this year, but I am working harder than ever before in training.

It was really nice to receive this award and get recognized for the work I've done," said Peary. "I never thought I would take rugby this far when I first started. But now that I'm here, I want to keep going and see how far the sport can take me – I'd love to compete internationally for Canada one day."

Until then, she is thrilled to be at UVic, playing rugby and is enrolled in the general studies program. All of which will be made slightly easier with the help of this generous award. 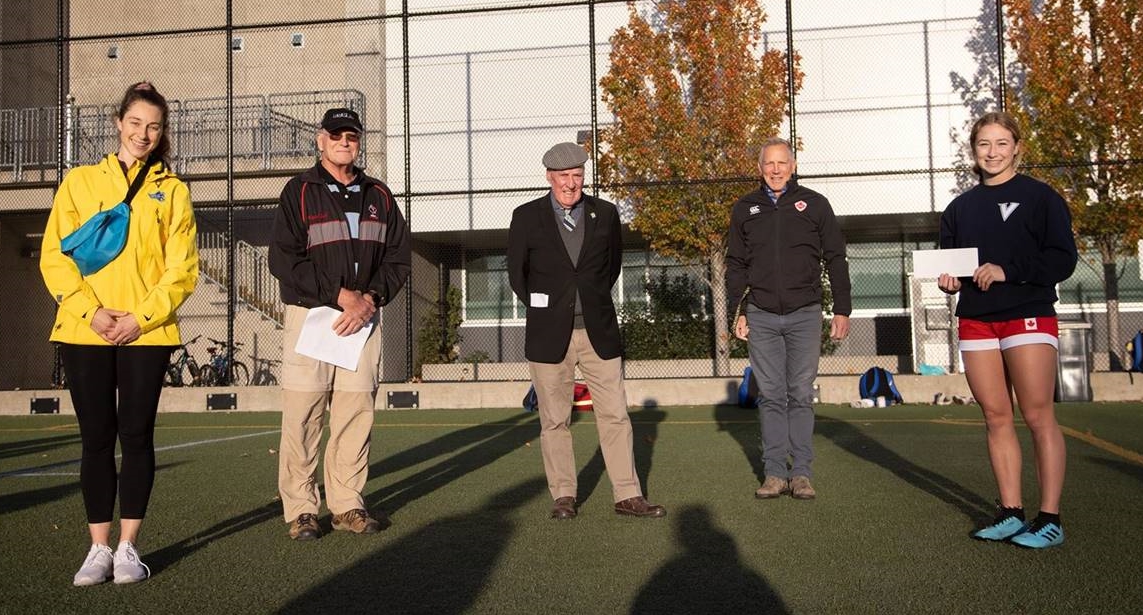