Women's Premier in the UK

It was the four Canadians for Exeter vs the lone Canadian for Saracens so it was perhaps in the cards that Exeter would end the Saracens winning streak that went back to 2018. Starting for Exeter were loosehead prop Olivia DeMerchant, hooker Emily Tuttosi, 2nd row Mckinley Hunt and #10 Taylor Black. Starting for Sarries was #8 Sophie de Goede.

The result sees Saracens drop to 2nd place in the standings at 7-1 behind 8-0 Harlequins. Exeter are in 5th place with a 5-5 record. 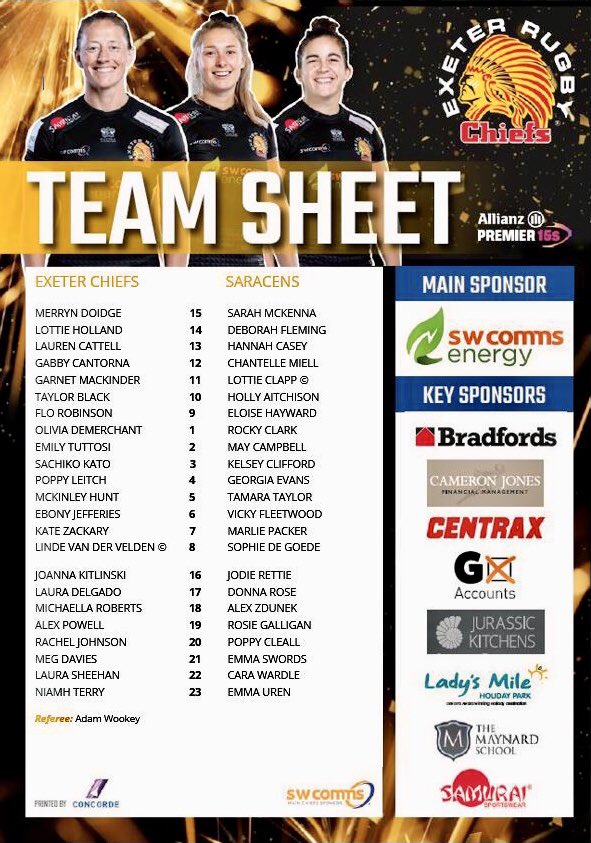 Saracens suffered their first Premier 15s defeat since October 2018 as they lost 22-14 to Exeter Chiefs.

Saracens scored through Cara Wardle with Aitchison kicking another two-point conversion but it was not enough.

Exeter Chiefs head coach Susie Appleby said: "I'm really pleased for the girls. We've all worked hard and stuck at it. We're on a really good journey and put a performance together.

"Beating Saracens is phenomenal, but putting performances consistently back-to-back is what makes a very good side."

This was the first game in the competition since 9 January after a two-week break to help reduce the spread of Covid-19.

Second-placed Saracens had won the opening seven matches of this season and their loss means leaders Harlequins, with eight wins from eight games, are the only remaining unbeaten team.

"I have to give credit to Exeter - the physicality and energy they had. They put in a very good performance and we didn't match that," said Saracens head coach Alex Austerberry.

"You can't really score if you keep losing the ball. It was very good from Exeter but we were really poor in our execution."

The Chiefs stay fifth having won five and lost five of their 10 matches in their first Premier 15s campaign.

Saturday's other scheduled match, between Gloucester-Hartpury and DMP Durham Sharks, was postponed because of flooding after heavy rainfall on Friday flooded roads on to the main road into Hartpury College venue.