World Rugby have announced their plans for the World Sevens Series for 2021. As we have seen before, plans in the COVID era are just that - plans, they can change very quickly. The plan includes the Olympics going ahead which is something that isn't 100% confirmed at this time. The latest news indicates the Olympics will likely go ahead but without foreign fans allowed into the country.

The Sevens Series for the women will include two consecutive weekends in Paris in May. Those will be the only Sevens Series tournaments, pre-Olympics. There is talk of Olympic warm up tournaments however and one mentioned by World Rugby would be based in Los Angeles from June 25-27.

After the Olympics, Vancouver could be the first stop in September but World Rugby could only say that "discussions on the viability" of the tournament are ongoing. It's the same case for the proposed tournament in London afterwards. The first locked in date is Singapore October 29-30 for the men's tournament.

There would be three more tournaments in the year, Hong Kong in November and Dubai and Cape Town in December. All three tournaments would be for men and women.

There's no mention of Langford in 2021 so it will be the second year in a row the tournament has been cancelled by COVID. 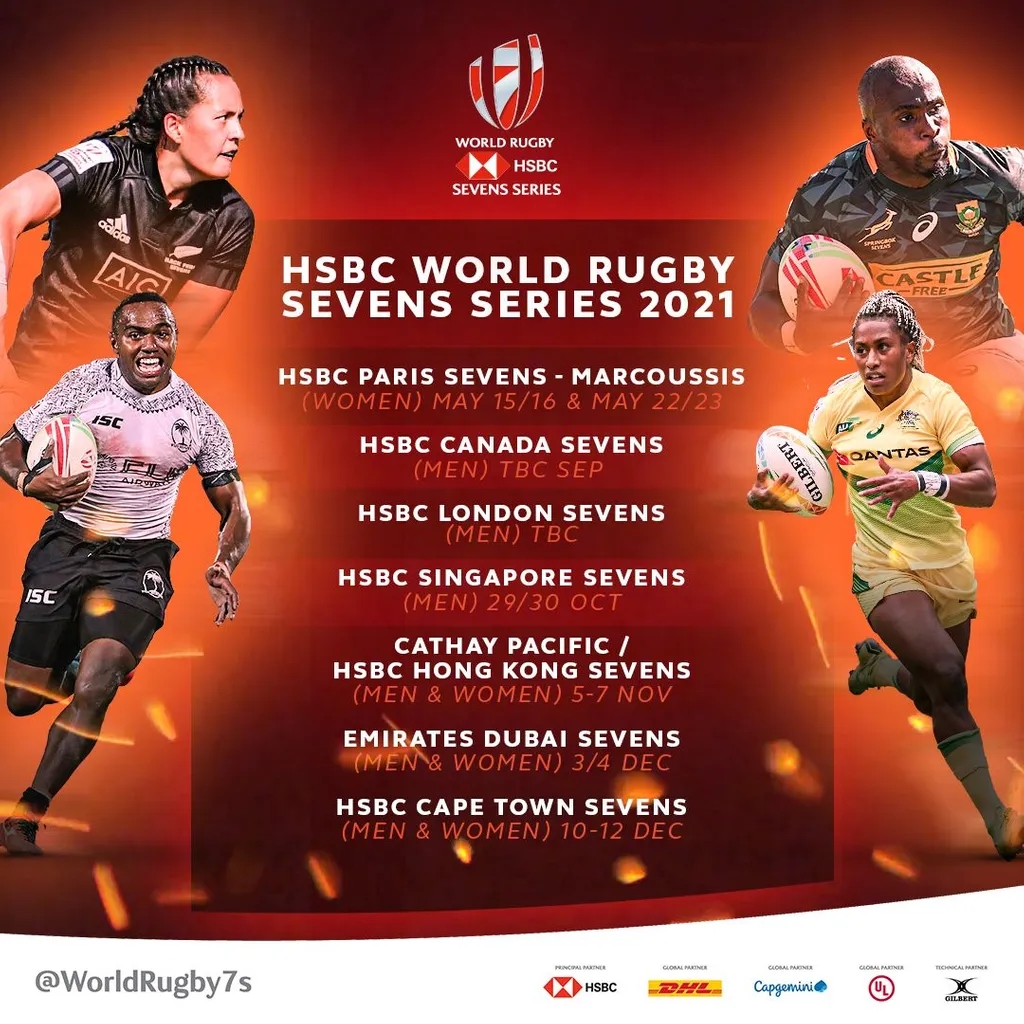 Rugby sevens fans around the world can mark their calendars and begin to look forward to the highly anticipated return of the HSBC World Rugby Sevens Series as plans are unveiled for the 2021 Series.

Given the unique circumstances brought about by the COVID-19 global pandemic, together with the spectacle of the Olympic Games in July, World Rugby has worked closely together with partners, host organisations and participating unions to agree a compact and highly impactful Series in 2021.

The condensed 2021 Series schedule includes five women’s and four men’s rounds, with the addition of a further two potential men’s events under discussion.

The 2021 Series kicks off with back-to-back women’s events in Marcoussis, Paris on 15-16 and 22-23 May. The Series will then take a break for the countdown to the Olympic Games and recommence with a men’s event in Singapore on 29-30 October, followed by joint men’s and women’s rounds in Hong Kong on 5-7 November, Dubai on 3-4 December, followed by an exciting climax in Cape Town on 10-12 December.

Detailed discussions are continuing with London and Vancouver on the viability of hosting men’s events in the window following the Olympic Games and prior to the HSBC Singapore Sevens in October and further updates to the schedule will be given when available.

The health and wellbeing of players, fans and the wider community remains top priority and both World Rugby and the host organisations will work closely with the relevant national governments and health agencies to ensure the safe and secure delivery of the events.

New Zealand are the reigning champions of both the women's and men's Series after being crowned winners of the 2020 edition, which was brought to an early conclusion with five of the eight women’s rounds and six of the 10 men’s rounds successfully completed prior to the onset of the pandemic.

In the men’s Series, Japan will join as a core team following their promotion from the inaugural HSBC World Rugby Challenger Series in 2020, while it has been agreed that in this Olympic year, the England, Scotland and Wales teams will combine to compete as ‘GB Sevens’ in both the men’s and women’s Series’ in 2021. This will create two additional invitational places for teams to participate in the men’s 2021 Series events, with invitational teams to be announced in due course.

The highly dynamic, skillful and athletic short form version of the game has been a huge hit around the globe since the Series was introduced in 1999, with its popularity growing year-on-year in a strong upwards curve, particularly in emerging rugby nations.

In 2019, prior to the COVID-19 pandemic, the HSBC World Rugby Sevens Series saw record-breaking fan engagement figures with a year-on-year increase of 64 per cent across video views to 198 million, and the Series attracted more than 749,800 attendees to its events globally.

To ensure teams are as best prepared as possible for the Olympic Games in Tokyo, and thanks to support received from the International Olympic Committee, World Rugby is investing US$4 million into Olympic qualified unions’ sevens programmes and towards the costs of hosting high-performance preparation events.

The first such event was organised by the Spanish Rugby Federation (FER) in Madrid on 20-21 and 27-28 February and saw six women’s and six men’s international teams gain valuable pitch time in a high-performance competitive environment.

Planning is at an advanced stage for a number of additional high-performance events, including a joint women’s and men’s event in Los Angeles over the weekend of 25-27 June as Olympic qualified teams look to intensify their preparations for the Games in Tokyo with high quality competition opportunities. Details of further high-performance preparation events will be confirmed in due course.

As announced previously, Monaco will host the World Rugby Sevens Repechage, the final qualification event for the Olympic Games in Tokyo, on 19-20 June, 2021. With 21 of the 24 teams already qualified for the Olympic rugby sevens competition, the remaining two women's and one men’s spots will be determined in Monaco.

With its fast paced and action packed nature, rugby sevens is expected to be one of the most highly anticipated events of the Tokyo Games. The Olympic competition, which will take place on 26-31 July, 2021 at Tokyo Stadium, follows the outstanding success of Rugby World Cup 2019 in Japan, which captured the nation’s imagination with record-breaking broadcast audiences and huge numbers of new rugby fans across Japan and Asia.

The inclusion of rugby sevens for the first time in the Olympic Games at Rio 2016 had a huge effect on the sport, attracting an estimated 30 million new fans globally according to Nielsen research.

World Rugby Interim Chief Executive Alan Gilpin said: “Today’s announcement of the HSBC World Rugby Sevens Series 2021 schedule marks a significant and exciting moment for rugby seven’s re-emergence from the impacts of the global COVID-19 pandemic and we thank HSBC and all Series partners for their unwavering support, and host organisations and participating unions for their hard work, patience and spirit of collaboration.

“As a key driver of game growth, particularly in emerging markets, the continued success of rugby sevens and the Sevens Series is a strategic priority for World Rugby and our US$4 million funding to support sevens programmes is a clear demonstration of our commitment. This unique Olympic year provides a huge opportunity to reach new audiences around the world and introduce them to the speed, skill and excitement of rugby sevens, encouraging them to become future fans of the Series.

“Above all, the health, safety and wellbeing of players, fans and the wider community remains our top priority and all stakeholders will continue to closely monitor global developments with the COVID-19 pandemic and work closely with host governments and health agencies to ensure a safe, secure and highly impactful return to the HSBC World Rugby Sevens Series.”

HSBC Group Head of Brand and Brand Partnerships Jonathan Castleman said: “As long-term global partner of the HSBC World Rugby Sevens Series, we are delighted that the green shoots of recovery are starting to show with today’s announcement of the 2021 series schedule.

“We are moving into an exciting period of opportunity. As we build back there is a chance to return better than ever before and for the sport to be more equal, more innovative and more inclusive of players, fans and communities from all around the world - a challenge we look forward to taking on alongside our partners."

Given the unique and unprecedented nature of the global COVID-19 pandemic and its various international travel restrictions and quarantine measures, it is accepted that some teams may not be able to travel or participate in all 2021 Series events. Where possible, World Rugby will invite replacement teams to fill the places of any core Series team unable to participate in a Series event.