The Rugby Network a collaborative effort between MLR and RugbyPass, the service owned by Sky Sport NZ, will provide live streaming of four MLR matches this weekend. The Toronto v Atlanta match will be blacked out in Canada since TSN will provide the live feed on TSN 2. Here is Saturday's schedule with the Live Stream matches indicated.

DALLAS (March 16, 2021) – Major League Rugby (MLR) has launched a free streaming and digital content network, The Rugby Network, in advance of the 2021 MLR season, which kicks off March 20. MLR collaborated with RugbyPass, to create The Rugby Network, the first of its kind in North America, providing fans with a single destination for all their rugby content needs, including live streaming of select Major League Rugby matches, international matches, highlights, and exclusive behind-the-scenes content. RugbyPass’ breadth of content and capabilities in building audiences and engagement made them the obvious choice of MLR to work together on The Rugby Network.

“The Rugby Network provides rugby fans access to high-quality content for free as well as generates awareness of the sport to create the next generation of fans,” said George Killebrew, Major League Rugby Commissioner. “The Rugby Network will be an exciting development for MLR and North American rugby as a whole. We are looking forward to working with RugbyPass to launch this platform that will be the definitive home for rugby fans across North America.”

To support the growth of rugby across the United States and Canada, MLR is spearheading the creation of a centralized digital platform with its league, teams and players as the heart of the network. Leveraging RugbyPass’ content and network to develop closer relationships with all fans of the sport is vitally important and part of a long-term commitment by MLR. The live stream of matches, and the future expansion to all over-the-top devices, will be made possible through the ViewLift platform, a leading end-to-end digital solutions partner to sports leagues and media companies around the world.

It is expected that rugby’s popularity in North America will increasingly grow over the coming years with younger audiences openly seeking “non-traditional” sports content. Research indicates that 56 percent of Millennial and Gen-Z sports fans in North America believe that non-traditional sports are more relevant to their generation. The Rugby Network will cater to younger demographics as well as existing fans reaching across OTT and social media platforms.

An estimated 1.3 million people participate in rugby in North America, with a further 8.8 million active fans – a number set to increase fourfold over the next decade. It’s also expected that bids will be made to host the Rugby World Cup very soon.

“We share a joint vision with MLR to create a community of rugby fans and remove the hurdles they face across North America by providing them with the best news, highlights, podcasts, live matches and live blog feeds,” said Neil Martin, Global CEO at RugbyPass. “The Rugby Network will be an interconnected network of digital properties that will drive both interest and engagement with rugby. Our goal is to create an inclusive platform with MLR that will bring together and expand North America’s rugby community and also serve the international rugby fans.”

Fans are encouraged to visit www.TheRugbyNetwork.com for exclusive rugby content, and to stream MLR matches. Beginning with MLR’s opening weekend, four matches will be streamed live to North American audiences, with all six matches available for replay. Overseas fans can stream all MLR matches live.

All MLR tune-in information is available at https://www.majorleague.rugby/schedules/. 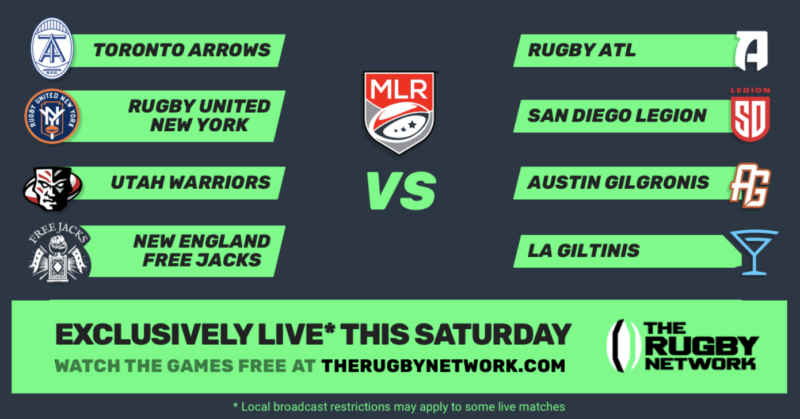