After watching the first matches on Day 2 where Canada's women lost to France and the men to Kenya, there was a little bit of trepidation about the programs progress over the break. However by the end of the day with the women winning Gold and the men winning the Plate, it looked as if things were on course and as they were before COVID hit.

The women are expected to medal and the men to be competitive, that's been the expectation since the beginning of this Olympic cycle. The women's loss to France to start Day 2 looked ominous, they looked like a team without a coach. But to their credit they pulled together and put up a win against Japan followed by a spectacular win against the on-form USA to claim Gold at the tournament. Charity Williams was on fire and seems to be able to balance her off field social warrior fame with her on field rugby warrior duties. Britt Benn put in a solid shift and Elissa Allarie was always dangerous with ball in hand. There are only 3 months to peak for the Olympics with one warm up tournament left in LA, hopefully the team will gain momentum from this result.

The men lost to Argentina (tournament winners) on Day 1 and to Kenya on Day 2. That put them in the Plate final versus Chile. They were down 14-12 at the half but had a very good second half to win 31-14. There's lots to work on if they want to get into the medal rounds at the Olympics. Brock Webster was outstanding in his defensive efforts to track back and stop a few certain tries, Conor Trainer set the example in running straight and hard, Jake Thiel had some big man moments where he kept his feet in the tackle and offloaded to support runners.

The Day 1 and 2 videos and results are posted below. 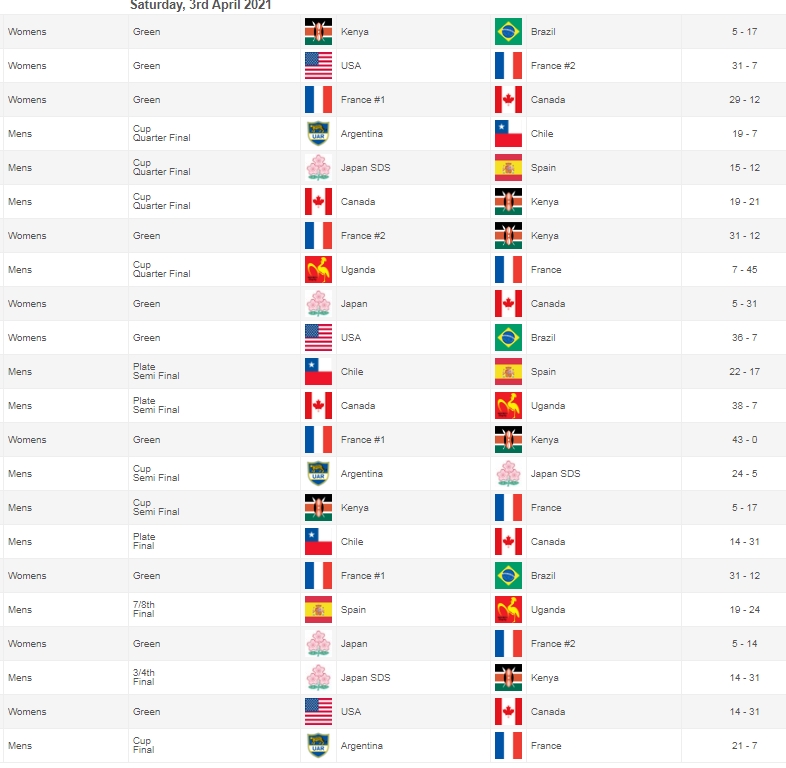 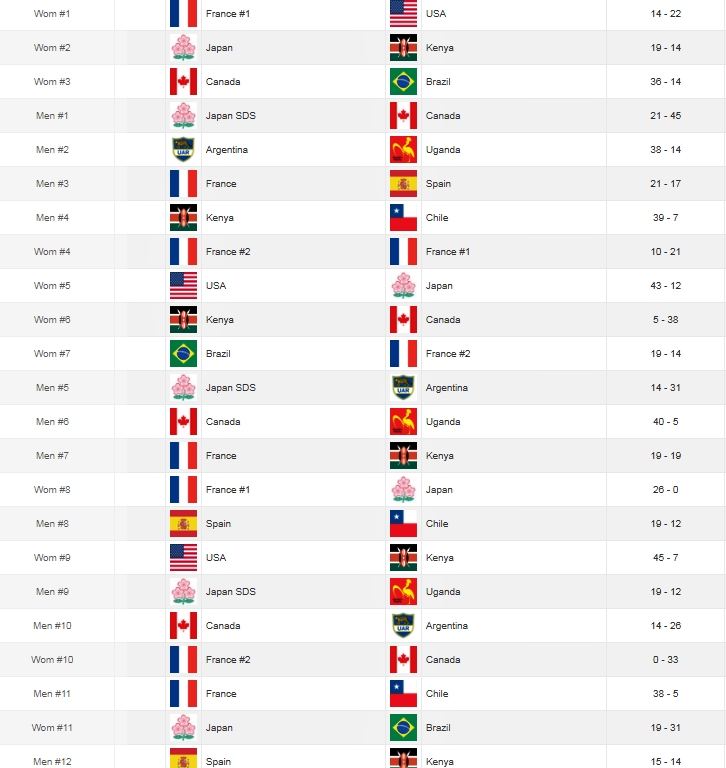 With the Olympics set to proceed a number of teams have been looking for warm up tournaments. The Canadian teams didn't go to the earlier tournament in Spain but are going to this tournament in Dubai.

It's interesting that the USA men aren't listed for this tournament after their marquee player, Perry Baker, suffered a serious leg injury during the Spain tournament. The USA women are listed for Dubai and they were also in Spain. Top teams like NZ and Australia have not attended either tournament.

The men will get top competition from Argentina, France and Kenya in particular. Argentina won the tournament in Spain.

The women will be tested by USA and France. There's still a cloud over the women's program as long time coach John Tait was removed from his position after Rugby Canada announced an investigation following "complaints" from some of the senior players. That investigation is still ongoing.

The men are taking 17 players (women 19 players), besides the regular sevens series players, there are two additions from the Pacific Pride, Alexander Russell and Brennig Prevost.

There's no mention of any live stream at this time.

After over a year without competition, Rugby Canada’s senior sevens programs will depart for Dubai this week to participate in two Olympic preparation tournaments. The Emirates Invitational 7s will be, a competitive training camp including two tournament weekends for a number of the best rugby sevens teams in the world. Though not part of the HSBC World Rugby Sevens Series, the Emirates Invitational 7s is a high-performance preparation event in advance of the Olympic Games in Tokyo. The tournaments will be played over back-to-back weekends April 2-3 and April 8-9 at The Sevens Stadium in Dubai.

This will be the first competition for both teams since the global COVID-19 pandemic halted play on the HSBC World Rugby Sevens Series over a year ago. For Canada’s women, their last competition on the Series was a silver medal finish at the Sydney 7s in February 2020. For the men, their last competition was a bronze medal finish at HSBC Canada Sevens in Vancouver last March. The Vancouver tournament was the final stop played on the sevens series before the 2020 season was concluded due to the pandemic.

Both teams are travelling with an extended squad of players. The Dubai tournaments will be an opportunity for all players to get valuable live match play after several months of training under strict COVID protocols in Langford. Full travelling rosters are listed below.