On National Indigenous Peoples Day it merits looking at what rugby is doing to help Indigenous Peoples in BC. That conversation would quickly turn to the Thunder Indigenous Rugby organization featuring former national team players Bobby Ross (Songhees Nation) and Phil Mack (Toquaht Nation) as leading figures. Director of Thunder Rugby is John Lyall, a rugby player for over 25 years, who is of Kwakwaka’wakw descent. They're focused on creating opportunities through rugby for Indigenous youth.

Their latest initiative is to create a fund through the Canadian Rugby Foundation that would, in perpetuity, provide funding for an annual Indigenous youth rugby tour, starting in 2022 with a tour to New Zealand where Maori culture and rugby go hand in hand. The benefits of touring are explained by Bobby Ross, "A rugby tour embodies everything that is good about sport. You bond with team mates and make friends for life. You get to test yourself against great players and absorb their culture. It is a soul and life enriching experience."

One of the companies supporting this initiative is Pemberton Holmes, in a letter to company personnel, President, Mike Holmes, and Chairman, Richard Holmes, encouraged agents to donate to the fund noting the company will match their donations for the next 3 years. "Richard and I, along with my good friends, John Lyall and Bobby Ross, and the Board of Thunder Rugby, have launched a fund to build a permanent endowment with a vision of allowing an Indigenous rugby team to tour every year, commencing with a tour in 2022 to New Zealand. New Zealand was chosen as it is, for many, the heart of rugby and Maori culture... As part of this effort, Pemberton Holmes has pledged to match any donations that are raised from the company over the course of the next 3 years." It's a generous action and one that will hopefully prompt other companies to follow suit. Mike, also a rugby player and rugby benefactor for many years, explained the reasoning behind this initiative, "I also believe that we all need to do our part to give Indigenous Peoples more opportunity and hope for the future. One thing I am passionate about is the benefit of team sport to young men and women. Doors are opened and character and relationships, built on shared sacrifice and teamwork, often last a lifetime."

The Thunder rugby program will embark on a BC tour this summer, August 16 to 24, covering Victoria, Vancouver, Abbotsford, Kamloop and Prince George. Prior to that they'll go to Prince Rupert for a weekend session on July 24th.

Accompanying the Thunder coaches on the August BC Summer tour will be Clay Panga, of BC Grassroots Rugby, one of the Thunder partner organizations. Clay, of Maori descent, will be hosting the Thunder team when it visits NZ in October 2022.

If you would like to support the Thunder by donating to the Canadian Rugby Foundation Thunder Indigenous Fund or want to help with the BC Summer Tour, contact John Lyall at jlyall@thunderrugby.ca - also the following links will be useful. The Thunder Fund brochure and BC Summer Tour poster are also included below.

Canadian Rugby Foundation website (you can donate to the Thunder Fund online, all donations are tax deductible)
https://canadianrugbyfoundation.ca/ 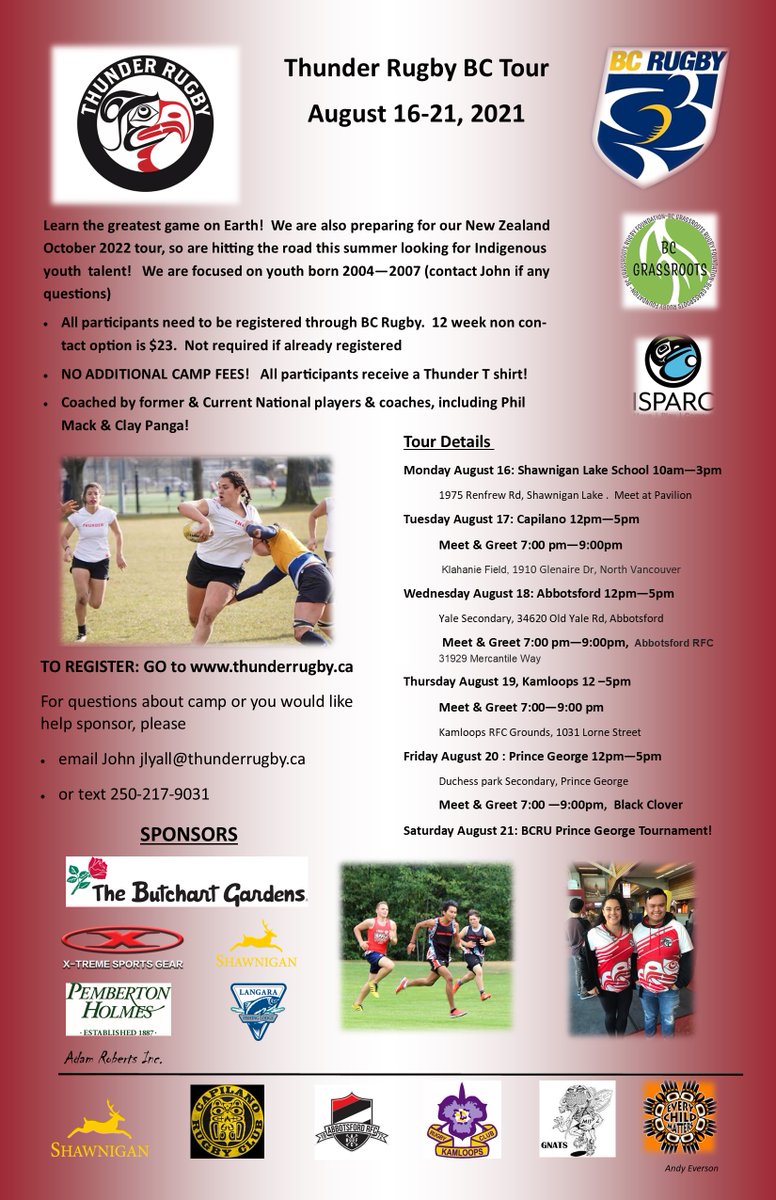