BCRN: Hi Scott, you've just stepped into the UVic men's coaching role, replacing their long time coach Doug Tate. How has the adjustment period been, anything catch you by surprise in the first few weeks?

Scott: Ya, the first month has been pretty eye opening as to the scope of the role. Coming through the program as a player, you think that you have an idea of the work that goes into it, but the amount of things to consider, apart from being a rugby coach has created quite the learning curve. Thankfully, Doug has been instrumental in helping to ease the transition. After filling the program lead role for 20+ years, there are so many things that would have become second nature to him, but are very new to me. Being able to bounce questions off him when they come up has been invaluable.

BCRN: Rugby has been down for a while in BC, what are the plans for the UVic men's rugby program this fall?

Scott: Luckily, UVic rugby was able to train last year throughout the COVID restrictions. This summer we’ve been training a few times a week with the group that are based here on the island, which isn’t something that UVic has normally done. I think this is just a testament to how keen everyone is to get back playing again. This fall we’re excited to be joining in with a new pilot league structure that will include some very tough competition. From my perspective, there is no better way to prepare for a national university championship than to play against the best possible opposition available.

BCRN: It's always exciting to see the new crop of players at the university level. There have been quite a few that have gone on to represent Canada in XVs and 7s in the past. What can you tell us about some of the new recruits? How many new players are there this year and any that may make the 1st team squad in their inaugural season with UVic?

Scott: It is a bit of an interesting year, with two years of students that will be yet to play a game in a UVic jersey. Although most of the recruiting was done by Doug, prior to me taking over the role, I’ve been spending the last month trying to connect with everyone. I can tell you that there are some exciting young players joining the program, but making the jump from high school rugby, to top level club/varsity competition is a tough task. I think there are a couple that have the potential to do so, however, only time back playing in a pressurized environment will give us a true picture of where they’re at. We have to remember, students coming out of high school likely haven’t played rugby since grade 10. Time to adjust to the new level will be key, but my hope is that some of these men come in hungry to compete hard, progress quickly, and surprise us by challenging the Vikes for spots.

BCRN: How about the veterans, they've had a bit of time off with the 2020 season cancelled due to COVID. Who are some of the veteran players you'll be building your Vikes squad around?

Scott: The best thing about taking over the role to this point has been getting to know some of the people that are already a part of the program. I’ve had the chance to sit down with a number of the senior players now, and it has shaped a lot of my thoughts about where the program should go. Logan Martin-Feek was the co-captain with James O’Neil through the National Championship, and then captained the group through what would have been a tough COVID season. He has been integral for me in getting to know the group and understanding what the players need from a new coaching staff. There is something about knowing what it takes to win a championship, so Logan along with the other member of the squad that have had the experience of lifting a national championship trophy are going to be important in leading the way. That being said, every year has surprises, and I can’t wait to see what players take their opportunity this year to make their stamp on the Vikes season.

BCRN: The Vikes have always had a wide, expansive running game, which makes sense since they play against club squads that may have larger forwards. What will the Vikes style of play be like under your guidance?

Scott: Coming from playing in the outside backs myself, and also being a former Vike, I have always been an attack minded coach. I love to see players be creative in the way that they look to find and exploit space. Like you said, the Vikes have always been good when the game gets a bit looser and they can play running rugby, utilizing their speed, fitness and skill. The goal of the coaching staff is to try and highlight the strengths that are already there in this group by helping them to create more opportunities where the game can become loose. In order to do that, you need to be better on the defensive side of the ball, and have clarity as to what you want to do when the game does inevitably slow down. By focusing on these areas, my hope is that the traditional Vikes ‘expansive’ attack is going have more chance to come out.

BCRN: The UVic v UBC rivalry has always been fierce with a lot of respect between teams. UBC have won the Wightman Boot trophy the last few years, six consecutive I believe, are UVic making plans to reverse that trend? Have the Wightman Boot games been scheduled yet for this season?

Scott: I’ve played in a few of these games myself and they’re definitely ones that the players get up for. With the nature of the Vikes schedule, we don’t get the opportunity to test ourselves against other collegiate opposition all that often, so when you do, it just seems to have that little bit of extra importance. I have a ton of respect for what Curry and crew has done with the UBC program over the last decade. There is a reason why they are where they are as a program. That being said, as a former Vike, there is a ton of pride in this program. I wouldn’t say our plans are necessarily based around reversing any trend. I’d say our plans are about creating a student-athlete environment that is challenging, purposeful, and enjoyable. I think UVic has the ability to be the top school of choice for any student who wants to pursue collegiate rugby. For me, results are a product of the environment you create, and if we can consistently get that part right, I have no doubt we’re going to see that consistency in the results as well.

BCRN: UVic are the current University champions, the Spence McTavish Cup, is the competition going ahead this year? If so, what are the preparation plans?

Scott: This year the University Men’s Championship is to be played for at the end of November, hosted by Queens in Kingston. We will have to qualify for the tournament through two western births that will be played for between UBC, TWU, and ourselves. I feel that we have the benefit of a very difficult fall schedule and the goal is to use this strength of opposition to help us to peak for the qualifiers, and eventually the tournament at the end of November. We have a large number of guys returning from that championship team and they are eager to compete to retain it.

BCRN: Thanks Scott, for taking the time to talk to us. Hopefully, we'll have a chance to catch up along the sidelines this fall. 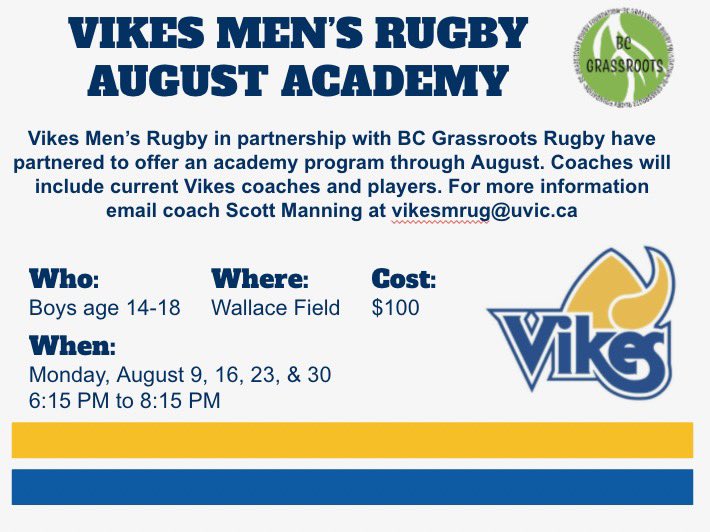