Canada lost to USA 22-12 to start Day 2 before running up the score on the winless Mexican team, 48-0. Mexico failed to score a point over 5 games at the tournament.

Great Britain went undefeated at the tournament and defeated USA 34-12 in the final.

The teams now head to Edmonton.

Canada face USA on Day 2 in one semi, GB face Mexico in the other semi-final. The winners will compete for the title in the 4 team tournament.

Canada will face USA, Great Britain and Mexico in Day 1 of the four team tournament. Day 2 will see a 1v4 and 2v3 match with the winners competing for the title and losers competing for 3rd place.

Canada have a young squad with only 2 players returning from the Olympic squad, Breanne Nicholas and Olivia App. 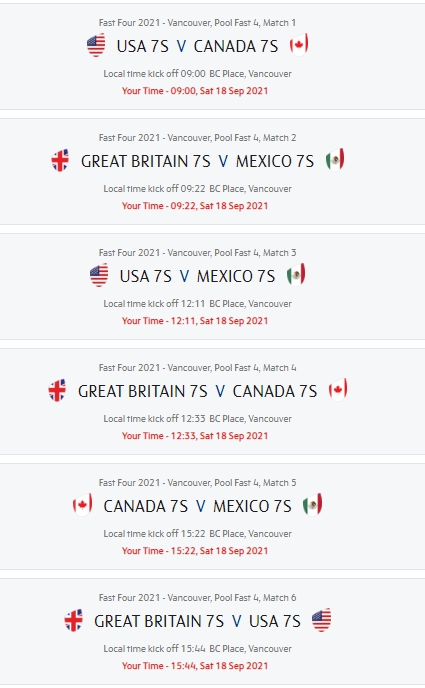 It's a new look team for the tournaments in Vancouver and Edmonton. Only two players who were on the Olympic squad, which finished a disappointing 9th, are in this team. Only six of the thirteen players were signatories on the complaint in January that got former coach, John Tait, dismissed.

September 10, 2021 (Langford, BC) – Following the competition at the Tokyo Olympic Games, Rugby Canada has selected a new-look squad for Canada’s return to the HSBC World Rugby Sevens Series in Vancouver (September 18-19), and named a new coaching team leading the charge.

Kelly Russell will fill the role of Head Coach of the Women’s 7s team for the Vancouver and Edmonton events. Since signing off from her remarkable career which included playing in the final of both the sevens and 15s Rugby World Cup in 2013 and 2014 – the latter as the team captain – and being part of the 2016 Rio Olympic Games Bronze medal Canadian squad and subsequently finishing her career with 53 caps for the 15s team, she immediately turned her dedication of the game towards coaching.

The team selection features some players with World Series playing experience, along with next generation athletes making their first starts at this level. Other experienced players will be taking a deserved rest prior to the start of the 2022 HSBC World Rugby Sevens Series.