Two Canadian players are in the running for the tournament Dream Team, Brennig Prevost and Jake Thiel. Voting is online at https://www.world.rugby/sevens-series/dream-team

The teams now move on to Edmonton.

Canada had a blistering start, putting 24 first half points on Germany in their first match but ran out of steam in the second half, to win 24-5.

The team had to fight for a come from behind victory against Chile, winning 19-14.

They didn't have enough to stop USA however as the US put in 3 quick tries before Canada notched one. USA scored two more to start the second half before Canada responded with two late tries. Final was 29-19 for USA.

Tomorrow Canada face Great Britain who won their first two matches before drawing with Ireland. South Africa look the class of the field amassing a +99 differential in an undefeated Day 1.

Canada's first match will be against Germany, coached by former Canada coach Damian McGrath. Germany played recently in the RugbyTown 7s where they came fourth.

Canada only have four players in the lineup who were part of the world sevens series, Jake Thiel, Andrew Coe, Phil Berna and Josiah Morra.

After Germany, Canada will play Chile and finish off Day 1 against USA.

The USA are also bringing a team with many new caps, seven players will earn their first cap and Martin Iosefo will lead the team with 46 caps. 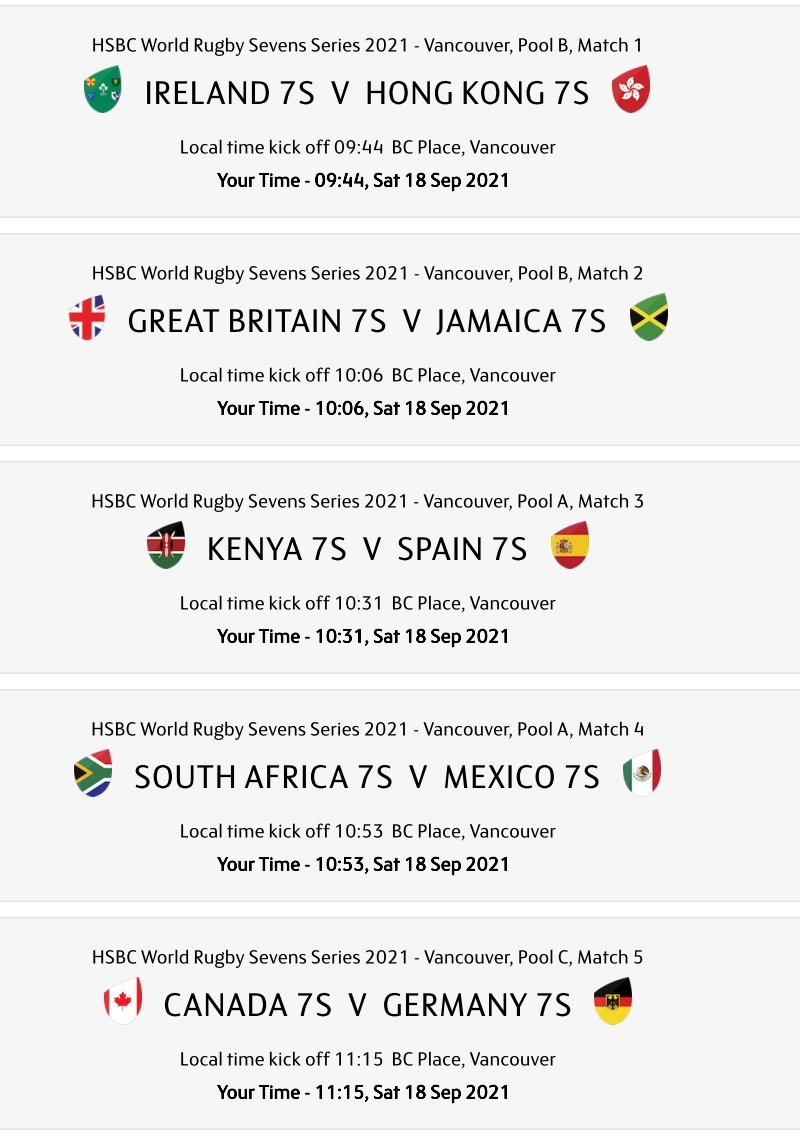 Only 3 players from the Olympic squad who made the quarter-finals are named to the team. Jake Thiel, Phil Berna and Andrew Coe will likely take a leadership role with the team, especially after the announcement of Nathan Hirayama retiring. Previous to that Conor Trainor announced his retirement. Josiah Morra who didn't make the Olympic trip but has been a stalwart with the 7s program has also been named to the team.

Canada will be in a pool with USA, Germany and Chile.

September 10, 2021 (Langford, BC) – Following their quarter-final performance at the Tokyo Olympic Games, Head Coach Henry Paul has named a new-look squad for Canada’s return to the HSBC World Rugby Sevens Series in Vancouver (September 18-19). The tournament will be the first World Series event to be played since March, 2020 due to the impact of the COVID-19 pandemic.

Canadian co-captain Nathan Hirayama announced his retirement from the 7s program earlier this week. An icon of the sport, Hirayama retires as the third leading scorer in Sevens Series history with 1,859 points, and the all-time Canadian try leader with 147 scored in 79 Series tournament appearances. He was also selected as a flag bearer, alongside Miranda Ayim, for Team Canada at the opening ceremonies for the recent Tokyo Olympic Games.

Canada will also be without the services of Conor Trainor, who announced his retirement last month. Trainor was a dual-code stalwart for both the Men’s 7s and 15s programs and finished his 7s career with 287 points, ranking 16th all-time for Canada.

“First off, I want to recognize both Nathan and Conor for their contributions to Canada,” stated Head Coach Henry Paul. “This selection features some new and exciting players as we turn our attention to the shortened build-up to the 2024 Olympics in France.” Paul continued, “After the two events on the 2021 Series, we will look to bring together these new players with some returning veterans that are taking a deserved rest in order to be ready for the start of the full 2022 HSBC World Rugby Sevens Series in Dubai.”