This was a game of two halves and the fitness of the Rugby Canada Academy side was a big factor. Van East went up by 4 tries and it looked as if they would ride their forward power to a decisive win. The Pride however upped their tempo in the second half and Van East had nothing left in the tank by the last 20. The Pride ran in 5 tries, a couple of them jogged in on the outside when Van East ran out of defenders. It was a powerful reminder that full time players are usually a notch ahead in fitness and it shows in the last 20.

Scoring for the Pride:

The following is the UVic match summary, we don't have the Tide scorers yet [UPDATED BELOW]. Tide scored on their last possession to steal the win. The match video should be archived on YouTube later, we'll add the link when it's available.

31 Minutes Remaining – Tide 7, UVic 0
The visitors muscled through the Vikes to score the first try of the afternoon, and followed with a successful conversion.

23 Minutes Remaining – Tide 7, UVic 5
A quick pass to Nicholas Carson allowed the fourth year to barrel through the Tide wall protecting the try zone for the Vikes' first score of the game. The conversion attempt was not successful.

17 Minutes Remaining – Tide 14, UVic 5
Breaking away from the Vikes, the Tide managed to extend their lead with another successful try and conversion.

34 Minutes Remaining – Tide 14, UVic 12
Opening the second-half scoring, Andrew Easson broke away from the Tide just behind the centre line, rushing up the right side. After quick back-and-forth passing with Carson, Easson got the ball over the line.
Christopher Gamage was successful on the conversion, bouncing the ball off the left post to secure the two points and pull the Vikes within two.

31 Minutes Remaining – Tide 21, UVic 12
In similar fashion to Easson just a few minutes earlier, the Tide broke away and rushed down the field for the try, followed by a successful conversion to extend their lead.

15 Minutes Remaining – Tide 21, UVic 15
Setting up for a drop goal, Gamage sailed the ball through the uprights for three points.

6 Minutes Remaining – UVic 22, Tide 21
A Shane Rikley-Krindle try and Gamage conversion gave the Vikes their first lead of the game, putting the Vikes up by one.

Final Seconds of Play – Tide 26, UVic 22
Down to their last run in the final seconds, the Tide managed to get the ball across the try line for the match-winning play.

An expected result, perhaps closer than some pundits thought, our prediction was a modest +15 for UBC. The score was 20-8 at the half. The video is below and we hope to get match reports from the teams later on.

Coastal Cup Kicks Off This Weekend with Three Matches: Predictions, Rosters and Players to Watch

There's 3 matches to kick off the Coastal Cup this week, the Vancouver Wave have a bye. Mark Janzen has written up a preview with rosters, take a look below. We'll just highlight some key players and give our early predictions. Note that only one of the matches will be live streamed, the TWU @ UBC match, link to be added when available (see below).

This is the easiest one to put a prediction on, TWU just getting their program going while UBC have been finalists in every Canadian University championship so far. Based on previous results it should be UBC by double digits. However TWU have done some recruiting, they've got Guiseppe du Toit at centre and have two players from South Africa and one from Ireland, so it may get interesting. UBC have 3 Carsons in the forwards, including capped Donald Carson at openside. One of my favourite upcoming players, expecting big things from him in the future, big Izzak Kelly in the second row is one to watch. Prediction: UBC by 15

This one is more difficult to predict with no form for either team from recent weeks. A new season for UVic and the Tide a rep team that's new every season. Looking at #10 may give a hint, UVic missing Logan Martin-Feek due to injury, he recently signed with the Toronto Arrows, the Tide featuring Grady Bowd a capped international coming back to competitive rugby after a sabbatical. He earned 8 caps for Canada in 2016-2017, most at flyhalf. He certainly has the talent to make another run at the national team or an MLR contract, if he so wishes. That head to head tips in favour of the Tide but how do the forwards match up? UVic have future Canada player Nick Carson at #8 but Tide has Zephyr Melnyck who showed very well at the recent Canada U21 camp at #8, maybe a slight tilt towards UVic but add in Ollie Nott (2 caps Canada 2017) at openside for the Tide and it goes in favour of the Tide. It may come down to the engine room and big Mike Finnemore for the Tide is one standout name at second row. Clayton Meeres, Canada A experience, on the bench for the Tide backline is also an influencer. Prediction: Tide by 5.

This may be the matchup of the weekend. The Pride, the Rugby Canada Academy under coach Phil Mack, has some of the best young talent from across Canada. Van East, basically the Burnaby club, perennial BC Premier contenders who feature two capped players in the forwards, Reegan O'Gorman and Lucas Albornoz. I like the matchup at hooker, both players could make a run for the national team or earn a contract with an MLR club. Van East with James Kelly, former flanker with the grit of a hooker and the Pride with Dewald Kotze, unlucky not to have made the Canada squad this year. The #10 matchup is intriguing as well, Van East with proven veteran Geoff Ryan and the Pride with a new face, Mark Balaski, from the Connacht Academy in Ireland but Canada-eligible. Late word from the Pride camp is that Cody Nhanala is out and Matt Klimchuk moves to #8, Ethan Fryer moves to #6 and Gabriel Smith moves into the reserves. That could be a key factor, Klimchuk at 19 will be going up against Albornoz, the 30 year old capped international who plays for Houston in the MLR. A big ask for the youngster but a huge learning experience for a player many pick to be a future fixture with the national squad. Another exciting player to watch is David Dinbandhu for Van East, effective as a #10 but moved to outside centre in this match. The Pride have a couple of strong prop replacements with Liam Murray and Nik Hildebrand, both playing in the MLR. James O'Neill, the openside with the Pride, recently signed with the LA Giltinis, the MLR champs. An intriguing matchup but I think Van East have that little bit of extra grit in the veteran forwards like Albornoz, O'Toole, O'Gorman, Kelly, McCann, Longbone, it will be a tough matchup for the Academy youngsters. However if it's an up tempo game, the Pride fitness may be a deciding factor in the last 20. Either way it's great to have rugby back in BC. Prediction: Van East by 1.

VANCOUVER – The inaugural campaign of the Coastal Cup kicks off Saturday with three matches, launching the seven-team high-performance league based in British Columbia.

The weekend sees a fascinating first-ever meeting between long-time rugby power UBC and relative newcomer Trinity Western University, who relaunched their varsity program in 2019. The contest, which sees a traditional Lower Mainland university rivalry find its way onto the rugby pitch, starts at 2:30 p.m. (PT) at UBC’s Gerald McGavin Centre.

The other two matches of the opening weekend are both on Vancouver Island, with the UVIC Vikes hosting the Vancouver Island Crimson Tide at 2:30 p.m. (PT) at Wallace Field and the Pacific Pride welcoming Van East Rugby to May Richards Bennett Pioneer Park for a 3 p.m. (PT) kick-off.

The Vancouver Wave is the lone club not in action on the opening weekend, as they open their season Oct. 2 at UBC (2:30 p.m. PT).

TWU will have a collection of both strong local talent, including captain Caleb Gerth, who hails from Langley, B.C., and an international flair, which includes South African flyhalf Keegan Marengo and Irish winger Tamilore Awonusi. The Spartans will also be buoyed by Canadian international and Toronto Arrows centre Guiseppe du Toit, who is moving from a coaching role to a playing role with the Spartans, as he works towards his Masters degree in Leadership at TWU.

As for UBC, it’s yet another strong Thunderbirds side that will run out on Saturday. While Jack Carson is off this weekend playing with Canada on the World Sevens Series in Edmonton, the Carson name will still be well-represented with Donald Carson, who represented Canada during this summer’s UK Tour, joined by David Carson and Frank Carson. Amongst others who already have distinguished age-grade resumes, UBC will have Bryce Worden, who was selected by the Toronto Arrows in the 2021 MLR Draft, in the front row.

The long tradition of the Crimson Tide returns to the field with Nanyak Dala and Sean White coaching a talented side. The 23-man roster selected for Saturday’s contest features no fewer than three Canadian internationals, including three-year Seattle Seawolves centre George Barton, alongside loose forward Ollie Nott, who plays with the Toronto Arrows, and flyhalf Gradyn Bowd.

On the other side of the ball is a UVIC team steeped in rugby pedigree. Coached by Scott Manning and captained by Logan Martin-Feek, who was a Toronto Arrows draft pick this past summer, the Vikes will be keen to get back on the pitch this fall. While Martin-Feek isn’t slotted into the 23-man roster for this weekend, UVIC will have a veteran starting unit made up entirely of athletes in at least their second year at the school.

The much-anticipated debut of Van East Rugby will see a team largely built from Burnaby Lake Rugby Club players take on the Pacific Pride. Like many of the sides in the Coastal Cup, the Van East Rugby team will include Canadian internationals, with Reegan O’Gorman of the Austin Gilgronis and Lucas Albornoz of the Houston Sabrecats both starting in the forward unit. The team will be captained by Mike O’Toole, as the former UBC Thunderbird sets up at blindside flanker.

The Pacific Pride return to the competitive pitch this fall and will once again be loaded with young talent intent on showing well. With the success of the program in developing pros and internationals, the team will of course be one to watch with familiar names like James O’Neill, Cody Nhanala and Sion Griffiths all in the opening day 23-man roster. 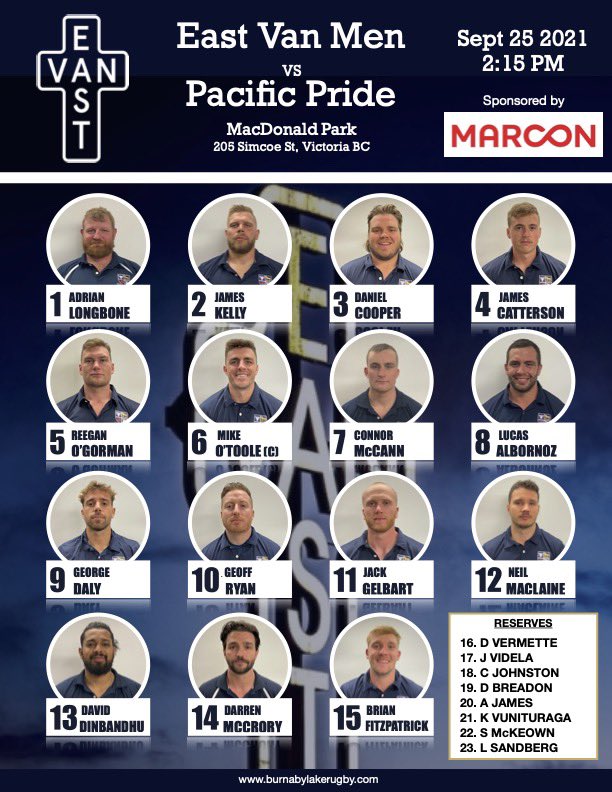 While the Wave have a bye this week, they will certainly be a force in what will a hotly-contested Coastal Cup campaign. The extended roster for the Wave includes a variety of players with age-grade international experience as well as Canadian international Sean Ferguson.