There will be a long hard look at Canada's men's XVs program and the leadership at Rugby Canada after they were knocked out of the Rugby World Cup for the first time since its inception in 1987. Chile were the better team on the day and played with an intensity that was lacking for Canada.

Chile were leading 16-3 at the half and outplayed Canada in almost every aspect of the game. They were winning the contact area, the kicking game and were able to unlock the Canadian defence with line breaks. Canada were struggling in the first 40 and as the announcers noted the energy level of the two teams was markedly different, Chile playing at a higher energy level.

The #10 for Chile had the play of the first half, taking a box kick from Braude that landed in the centre of the pitch. The two Canadian defenders didn't contest the ball and overran Fernandez who pinned his ears back and weaved through a porous Canada defence for the only try of the half. Chile added 3 penalty kicks to 1 for Canada.

The second half started better for Canada, a yellow card to Chile and a maul try by Howard for a 16-10 scoreline with plenty of time for a comeback. The comeback didn't last long however as Chile scored a try while down a man, and it was the way it was scored that showed the gap in intensity between the sides, particularly the forward packs. Chile without their hooker for a throw in, decided to tap and go from a 5 metre penalty. They were over after two phases through sheer strength and willpower as Dittus their tighthead prop bulled his way over the line. The score was 23-10 now for Chile.

Chile added a penalty and Djustice Sears-Duru was given a yellow card. With 20 minutes left and Canada down 26-10 and down a man, it's not looking promising for Canada.

Canada surged back with front row replacements Quattrin and Tierney making their presence felt, another maul try by Canada, scored by Quattrin and Canada are back in it, 26-17, with less than 15 minutes left. On aggregate, Canada are down by 8.

Chile come right back with the try of the match, set up by the player of the match, the Chilean #10, Rodrigo Fernandez. He broke several tackles, jinked through the Canada defence and offloaded to the fullback Santiago Videla. It's 33-17 for Chile with just over 10 minutes left.

Kainoa Lloyd scored the final try at the whistle out wide, final 33-24 for Chile and they advance to face the loser of USA v Uruguay. Canada are done in terms of advancing to the World Cup in France in 2023.

Kingsley Jones has gone with the core of the team he's used so far in the Rugby World Cup qualifiers. There are two changes to the starting XV, Tyler Ardron flew in from France on Sunday and travelled with the team to Chile, he'll start at #6. Matt Heaton was dropped from the roster. Lucas Rumball moves over to openside flanker. Pat Parfrey replaces Cooper Coats at fullback.

Canada have gone for a 5/3 split on the bench as they did last week. Last week Chile went 6/2 signalling their intent for a forwards based battle, which proved to be accurate.

Canada go into the match with a +1 differential so the winner of the second match is likely to be the series winner.

In last week's match, Canada were thwarted by their own inaccuracies. Peter Nelson had one of his worst performances in coordinating the backline for Canada. The insertion of Tyler Ardron, Canada's premier player, will likely boost morale and hopefully on-field performance.

Chile didn't look at all dangerous in the backline but their defence was solid. The question this week is can Canada find space out wide and keep their handling errors to a minimum? Will playing away from home be less pressure for Canada, as they seemed to be nervous last week playing in front of the home crowd. Will Chile be able to duplicate their patient effort this week playing in front of a home crowd?

There's a lot of pressure in this winner take all, loser misses the World Cup, match. The team that can keep their cool and stick to their patterns accurately while avoiding senseless penalties, will likely prevail.

Kickoff is 11am PT and is available by live stream on premiersports.tv

Chile have made one change in the starting XV, the loosehead prop, Carrasco in, Lastra to the bench. They've switched from a 6/2 to a 5/3, dropping a second row sub (Pedrero) and bringing in a centre (Larenos). 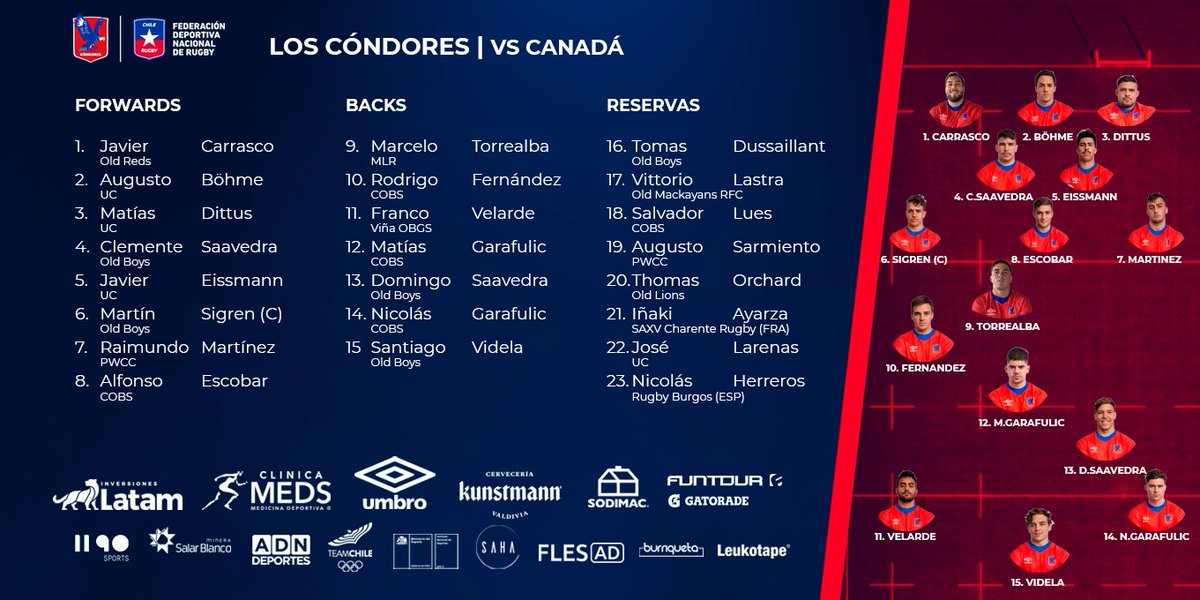 Kick off for the second leg of the two-match series is set for 2pm ET/11am PT, and it is available to view exclusively in Canada through Premier Sports. This weekend’s upcoming match, as well as last weekend’s thrilling win, are available to view for only USD $9.95.

There will be two changes to Canada’s starting roster this Saturday. Newly arrived Tyler Ardron slots into the back row at #6 for Matt Heaton who was unavailable for selection, and veteran Patrick Parfrey starts at fullback. In the reserves, Matt Tierney comes back into the match-day team at #18 while Quinn Ngawati wears #23 and could see his first Rugby World Cup Qualification action should he come onto the pitch. The side is again captained by Lucas Rumball.

The winner of the two-match series is determined by an aggregate score across both games and will face the loser of the USA - Uruguay series next July to decide Americas 2, which will qualify for the 2023 Rugby World Cup in Pool D alongside No. 4 England, No. 8 Argentina, No. 10 Japan and No. 13 Samoa.