Pacific Pride Rise to 3-0 in Coastal Cup with 46-14 Win Over Crimson Tide: Scoring Summary and Photos

[52 photos from the game at nationalrugbynews.com]

It was a 7 try to 2 win for the Pride, up 4 tries to 1 in the first half. The Tide closed out the scoring with a late try.

The Pride played a more up tempo game with faster ball from the breakdown. Three of their first half tries were with the overlap on the outside and one was from grunt work through the middle. The Pride have good depth throughout the match day 23 and kept the tempo up for the full 80.

It's hard to select a man of the match for the Pride as they had a number of good performances, Dewald Kotze at hooker was solid throughout and scored the first try, #8 Matt Oworu was dominant in contact and made some good offloads to keep the attack going.

For the Tide, Grady Bowd, at #10 put in a solid performance and finished off the scoring with a nice chip to the corner for a waiting Crosby Stewart.

The first try, Pride hooker, Dewald Kotze, going route 1 over and through tacklers.

David Richard scores his first try, all the work done inside meant it was an easy run in for the swift fullback.

Gabriel Smith also scoring on the outside had to beat two tacklers.

Crosby Stewart scores the last try of the match, a chip kick from Grady Bowd to the sideline setting him up. 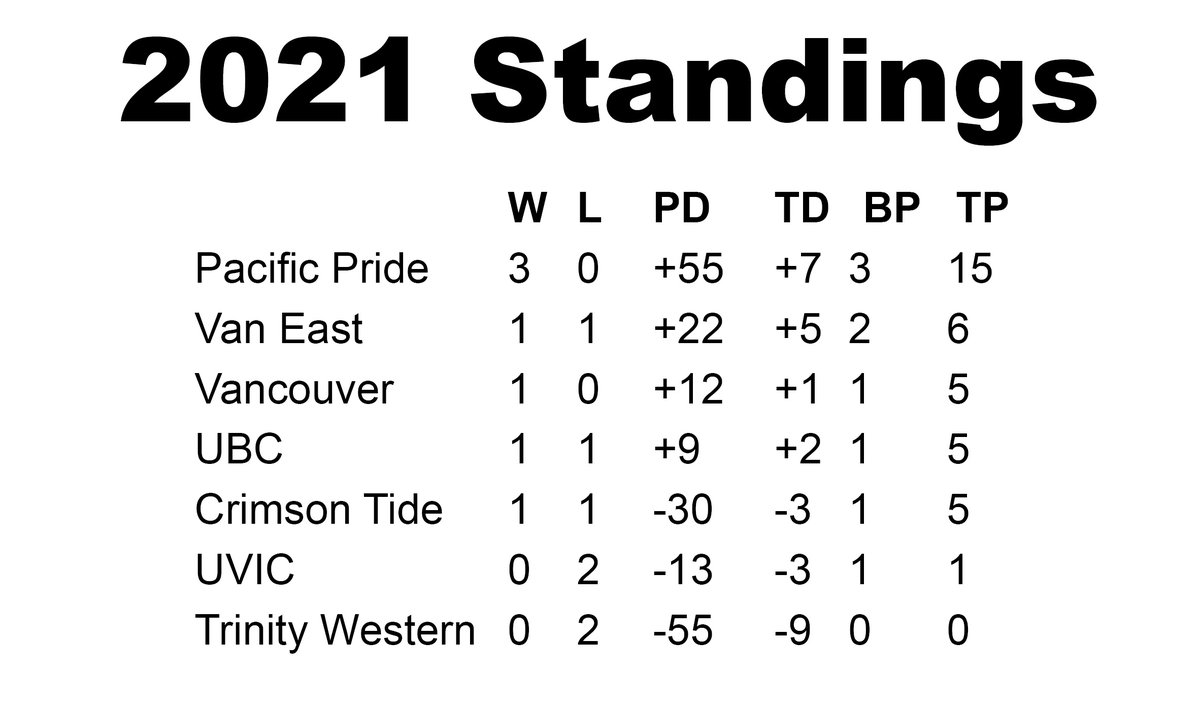 There's not a lot of rugby action over the Thanksgiving break. Both Westshore on the Island (Turkey 10s) and Abbotsford on the Mainland (Gobbler Fest) are running all day social tournaments on Saturday. The club league schedules start next weekend.

There's a top contest in the Coastal Cup with the Crimson Tide (1-0) matching up against the Pacific Pride (2-0). The match takes place at Westshore at 3:30pm following the social tournament final.

The Pride defeated UVic last week 33-23. It was UVic that finished the game stronger however, a turn around from Week 1 when the Pride came back from a four try deficit to defeat Van East. The Tide's win was against UVic, 26-22.

Sion Griffiths is one to watch for the Pride, he scored two tries last week. David Richard makes his first appearance for the Pride this year. Richard was Canada U20 in 2019 then went on to play Pride in 2019 and 2020 and also was capped with the Canada 7s team. Foster Dewitt comes back from the Canada XVs program to sub in at hooker.

For the Tide, they've lost the services of Ollie Nott at openside, as he's gone to the Toronto Arrows for a preseason match. Nanaimo's Matt Weir takes his place. Crosby Stewart, previously with the Pride program, slots into scrum half and teams up with former UVic teammate, Grady Bowd, who is at flyhalf. Seattle Seawolves and Cowichan player, George Barton, takes the inside centre spot. Mike Nieuwenhuysen comes into the side as an impact backline player.

There are a number of players who are looking to put their hand up for national selection and MLR contracts. It should be an exciting match, the point difference between a common opponent, UVic, is Pride +10 and Tide +4. Prediction: Pride by 6.

With a Thanksgiving bye weekend for five teams in the Coastal Cup, all eyes will cast towards just a single match, with the Crimson Tide hosting the Pacific Pride Saturday (Oct. 9) at 3:30 p.m. (PT) at Westshore RFC Field.

The Pacific Pride, who are the only team so far to start the competition 2-0, put their perfect record on the line against a 1-0 Crimson Tide side that is coming off a bye week.

The match will see the Crimson Tide wearing their specially designed jerseys that will be auctioned off (No. 1 to 15) after the game, with profits going to the Thunder Indigenous Rugby Fund. The Crimson Tide’s jersey was designed by the late Curtis Wilson. The image on the jersey was the first Thunder Rugby logo, which was created when the program first started in 2013.

The Pride are coming off back-to-back bonus point victories over Van East (36-24) and UVIC (33-22). With rosters set for Saturday’s showdown, the Pride have made five changes to their starting lineup from last week, including three amongst the forwards and two within the backs.

Up front Blake van Heyningen slots in at tighthead, while Tom Davidson comes into the second row, joining Matt Klimchuck, who moves from flanker to second row. Meanwhile, Ethan Fryer enters at blindside, where Klimchuck was last week. Amongst the backs, Canadian sevens international David Richard will draw in at fullback while Gabriel Smith gets into the lineup on the wing.

After a week watching from the sidelines, the Tide, who beat UVIC 26-22 in their season-opener, return with a largely unaltered starting unit. Amongst the forwards the only change has Matt Weir jumping into No. 8 to replace Ollie Nott. Within the backs, Crosby Stewart takes the No. 9 shirt while Shane Dagg gets in on the right wing, joining fellow winger Isaac Gonevou, who moves over to the left wing for Saturday’s tilt.