It's midway through the 8 week season and it's looking like the title won't be decided until the last week when the two undefeated teams meet, Pacific Pride and Vancouver Wave. There's a lot of rugby to play in between and one or both of those teams may lose a game before then.

This was the first week all 3 games were live streamed, so kudos to those involved for getting that together.

We predicted Van East by 8, so weren't far off. A key moment in the match happened early on, it was a feisty beginning, and the Van East #8 put a late hit on Grady Bowd, the Tide #10. George Barton was next to his teammate and must have reciprocated, the camera doesn't show, but it ended with James Catterson the Burnaby #8 getting yellow for the late hit and Barton getting red, presumably for reciprocating. The Tide did well considering they were down a man for most of the match.

The Tide scored first with a try by wing Shane Dagg off a chip kick to the corner by Grady Bowd. They extended that lead with a penalty 8-0. Van East got one back, the camera feed dropped out during the try, to make the score 8-7. Tide added a penalty for a 11-7 HT score.

The Tide added a penalty in the second half, 14-7, before Van East added a try off a tap and go from a 5 metre penalty, scored by Lucas Albornoz, 14-14.

Next week Vancouver Wave visit Van East which should be an epic battle. Van East are still in with a shot to win it all but need to win this match and hope the Pride lose a game or two. The Wave need to keep winning to set up the final showdown against the Pride in Week 8. The Tide have a bye next week.

The match video can be viewed at the link below. The first 20 minutes are the end of the TWU v Wave match so go to about 19:30 to watch the Van East v Tide match.

We predicted +25 to the Wave, it ended up being +53. The Wave look the real deal while TWU are still trying to cope at this level. Their most important match coming up next week as they travel to UVic and try to qualify for the Canadian University Championships, they have to defeat UVic to do that.

The following players scored for the Wave:

Next week the Wave visit Van East. The match video link is below.

It was a tight match in the first half, UBC going into the break up 5-0. They added another unconverted try in the second half, 10-0, before UVic added a converted try, 10-7.

The key play of the second half saw UBC score a try after UVic failed to find touch on a penalty. The try scorer was #21, listed as Ethan Berry. UBC mauled in a final try for the final 22-7.

Next week UBC travel to Port Alberni to take on the Pacific Pride, that should be a very entertaining match and a must win for both teams.

The match video is below, there's no commentary. 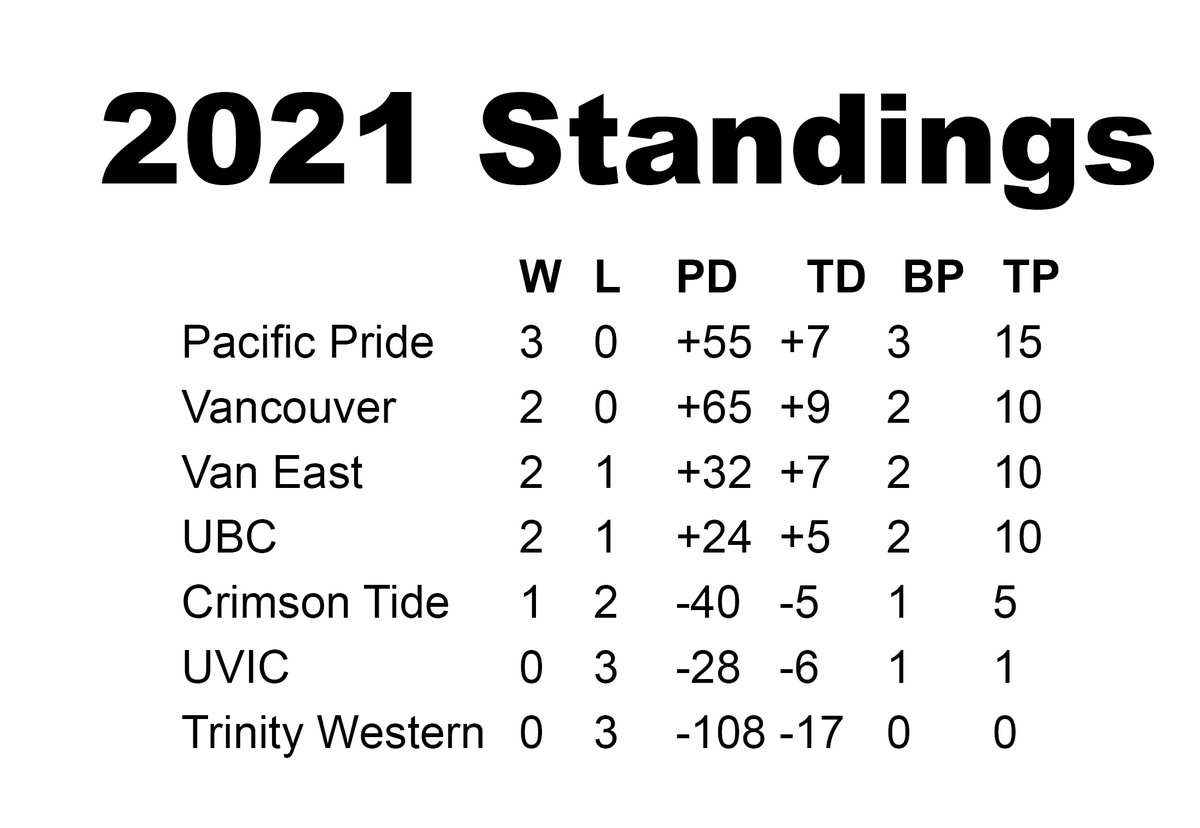 The league leading Pacific Pride have a bye this week and the only other undefeated team, Vancouver Wave, have a chance to move closer as they take on the winless Spartans from Trinity Western. UBC and UVic will be in another epic university battle with meaning beyond the Coastal Cup standings. Finally Van East will have their first home game and a chance to measure their playing level against the 1-1 Island Tide.

All games should be live streamed, the Van East game is already listed on the Coastal Cup YouTube page with the UBC games likely streamed on the UBC Rugby channel.

The Wave took down one of the pre-tournament favourites this year, UBC, in their first match. The Wave are a team to keep an eye on but likely won't be put to the full test this week as they face TWU, a new program that has yet to win a game in the competition. TWU have a -55 point differential over 2 matches, about a -28 average per match. Mike Maloney the Wave fullback from Australia has been pegged to top the scoring race by the end of the season. Prediction: Wave by 25.

A match with a lot of meaning, a University Championship qualifier, a Wightman boot leg and, of course, points in the Coastal Cup. Four Carsons in the UBC roster with Jack Carson returning from national 7s duties. Max Abercrombie slots into the #10 jersey, he played fullback for Canada in 2020 when the U18 team travelled to the USA. The Vikes are still missing Logan Martin-Feek, their #10 who was drafted by the Toronto Arrows. Noah Bain on the wing was sizzling at the Premier Rugby Sevens event last weekend in Memphis, the only Canadian on the winning team captained by Perry Baker. It should be an interesting match as UVic improved over their two matches, pushing the Pride in the second half of their last match. How much have they improved going into Week 4? UBC were surprised by the Vancouver Wave, damaging their hopes of winning the inaugural Coastal Cup season, how will they bounce back? Prediction: UBC by 2.

Van East might have the best forward pack in the competition, they surprised the Pacific Pride in Week 1, using that forward power to build a 4 try lead in the first half. Unfortunately for them they didn't have the fitness to finish off the full 80 minutes. Their fitness is likely to improve each week of the competition. Their win over TWU wasn't a real test of their level, this match will be a better test. The Tide were crushed by the Pride last weekend, Grady Bowd put in a good effort at #10, and with George Barton and Kainoa Lloyd in the backs they have some firepower. The Tide forwards may not be able to match up against Van East however, and as they say forwards decide who wins, backs by how much. Prediction: Van East by 8.

For rugby fans in the Lower Mainland, the weekend brings a tidy offering of enticing options, with a double-header set to take place at the Gerald McGavin UBC Rugby Centre while the Burnaby Lake Rugby Club will get its first taste of the Coastal Cup.

Kicking things off is the opener of the double-header at UBC, with the Vancouver Wave (1-0) hosting Trinity Western University (0-2) at 12:30 p.m. (PT). Following that game, the host Thunderbirds (1-1) welcome the UVIC Vikes (0-2) for a long-standing rivalry match that marks the first leg of the historic Wightman Boot, starting at 2:30 p.m. (PT) at the Gerald McGavin Centre.

Meanwhile, in Burnaby, the Crimson Tide (1-1) travel to take on Van East Rugby (1-1) with the Burnaby Lake boys getting their first crack at a home game, while the Tide look to bounce back from a loss last week against the Pacific Pride.

Click here to WATCH the Coastal Cup LIVE throughout the season.

Trinity Western will be seeking its first win of the competition, but will be in tough against a Vancouver Wave side coming off a season-opening 34-22 victory over UBC.

Having put together a tidy performance against the Thunderbirds, the Wave’s forward lot is largely unchanged, with Pat Zuk in at loosehead and Darragh Foley slotting into the second row. Josh Powdrell is the only back coming into the Wave’s starting lineup, as he enters on the wing. Mike Moloney, who is third in Coastal Cup scoring with 19 points, returns at fullback, with Adam McQueen guiding things once again from flyhalf.

TWU rolls out an altered starting front row, with Adam-Jay Fort getting his first start of the season at tighthead, having returned from injury, while Seth Klassen also gets his first start at hooker. Josh Halladay is back in the starting lineup in the second row, with the back row unchanged from TWU’s last outing.

Fynn Murphy will get his first opportunity to start at scrumhalf as a Spartan, while Lynden Duggan is the only other change to TWU’s backs, as he comes in on the right wing while Tamilore Awonusi moves to the left wing.

The traditional university rivalry between UBC and UVIC will see another chapter written, with the first leg of the Wightman Boot creating a tantalizing backdrop for Saturday’s contest.

The last time the Thunderbirds and Vikes met was Nov. 24, 2019 with Victoria taking a 21-20 win in the Canadian University Men's Rugby Championship final. Prior to that, the last game between the teams was within the Premier League, with UBC earning a 28-22 win (Oct. 11, 2019).

This weekend’s game also marks a qualifying opportunity for the university national championship, with the top two teams amongst the games between the three university sides in the Coastal Cup will earn a spot in the tournament. A UBC win seals their spot in the tournament, having beat TWU earlier in the year, while a Victoria victory would put them in a good spot to secure their place when they play the Spartans next week.

For UBC, Calixto Martinez comes into the front row at tighthead, while Donald Carson will play on the blindside and Alfie Scopes enters at No. 8. In the backs, Max Abercrombie jumps into the Coastal Cup mix at flyhalf, while Flynn Heyes gets the start at inside centre. Ryan Leskiw takes over on the right wing, with Takoda McMullin, who is second in Coastal Cup scoring with 21 points, moves to fullback. Of note, Jack Carson returns to UBC’s lineup after playing with Canada’s 7s side on the World Series, as he certainly could be a game-changer off the bench.

The Vikes will roll out a nearly identical starting lineup to their last outing, with the only change being Spencer Cooper and Denver Fatt swapping prop positions. With Victoria seeking their first win of the season, the consistency throughout the lineup this year could well be the key to success.

Holding a 1-1 record, Van East Rugby looks to push their way up the ladder at home, while on the other side of the ball, the visiting Tide are targeting a bounce back effort after a 46-14 loss against the Pride in last week’s lone Coastal Cup contest.

While Juan Videla is the lone change in personnel within the Van East forward unit – the Argentinian slots in at loosehead – the home side will rearrange the deck chairs, with Lucas Albornoz jumping into the second row, Mike O’Toole moving to the blindside and James Catterson going to No. 8.

Amongst the backs, Geoff Ryan enters at flyhalf, while Cole McQueen comes in on the wing and Neil MacLaine jumps in at inside centre. Jack Gelbart takes the other wing, while Coastal Cup try-scoring leader Brian Fitzpatrick, who has dotted down six times in two games, returns at fullback.

Also holding a 1-1 record, the Tide make just two personnel changes up front with Jake Sponarski coming in at hooker and Matt Weir entering the fray at flanker. Antonio Corbin moves from hooker to the blindside.

In the backs, the story of the day is Kainoa Lloyd returning from his Canadian international duties to slot in on the right wing. Shane Dagg moves to the left, while Rylen Waugh is in at scrumhalf and Mostyn Findlay moves to outside centre, with Crosby Stewart swapping his No. 9 shirt for No. 15.