UVic booked their ticket to the Canadian University Championships in Kingston in November. They'll represent BC along with UBC. We had predicted a +13 UVic win and weren't far off. Tamilore Awonusi scored 2 tries from the wing for TWU and Matthew Willemse added another. UVic scored 5 tries but Vikes media haven't posted a recap of the match yet to provide details.

There was no live stream of the match but you can read the TWU account here.

Next week TWU visit the Pride while Van East travel to UVic.

A low scoring game with UBC leading through most of the match. Donald Carson blocked a clearing kick and fell on the ball in the goal area for UBC's try. It was 10-3 until the final whistle, the Pride applied constant pressure inside the UBC 22 and it finally paid off with a pick and go over the line, scored by Callum Botchar, a late replacement in the roster, and converted by Balaski.

The UBC scrum was dominant for much of the match, especially before the subs came on. UBC right from the beginning announced their intention to play a physical game and put in some big hits early in the match to set the tone for the afternoon.

The result leaves the Pride top of the table but Vancouver with a game in hand can overtake them before their final encounter on the last weekend. The championship title still looks like it will come down to the Pride v Wave match on November 13th.

Next weekend the Pride host TWU at MacDonald Park while UBC have a bye.

Another low scoring match with the Wave leading 10-3 at the half.

The Burnaby Club are providing a top level streaming service for the matches played at their facility. Under Dog Productions is the company doing the streaming.

Vancouver remain the only team in the league with a perfect record, Van East are in 4th place behind UBC in 3rd.

Next week the Wave will travel to the Island to take on the Tide, part of a double header at MacDonald Park. Van East will also be taking the ferry to play UVic at Wallace Field. 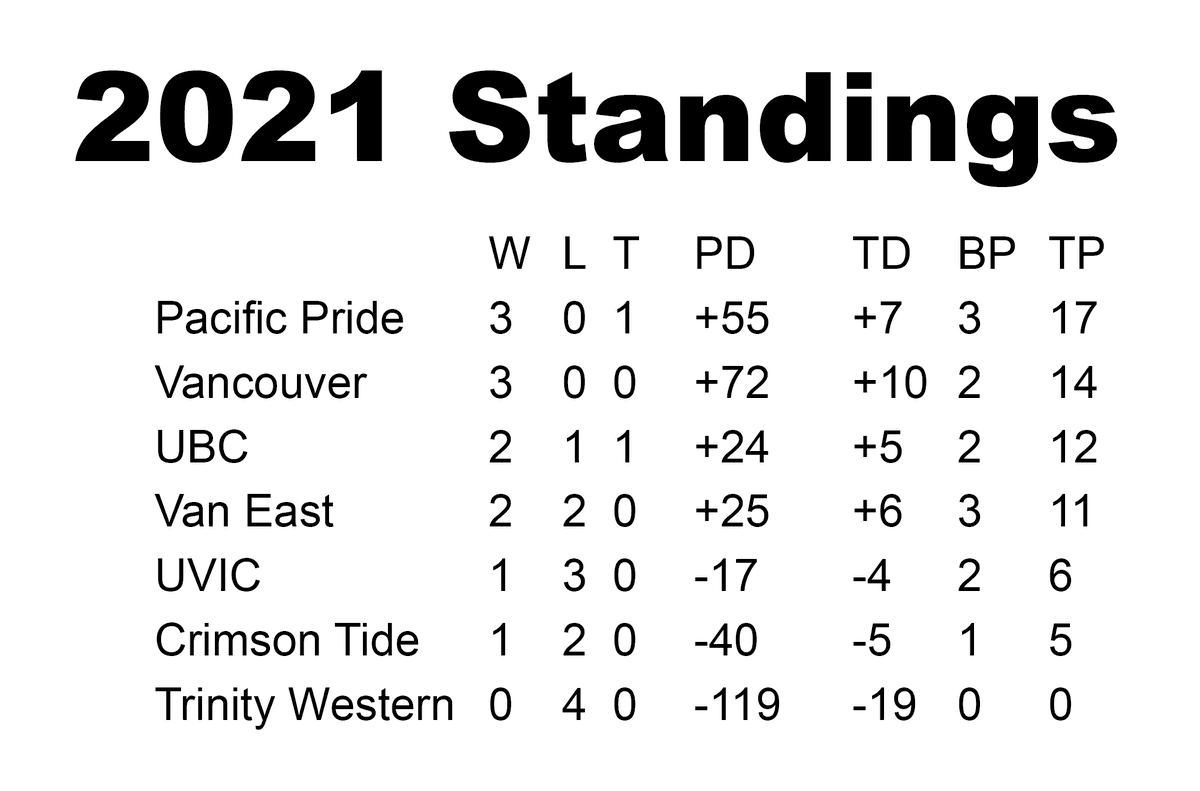 The Coastal Cup enters the second half of its 8 week season. The Pacific Pride continue unbeaten and may face their stiffest test to date when they host UBC in Port Alberni. The Vancouver Wave are also unbeaten and face Van East who hope to keep their championship aspirations alive with a win. TWU visit UVic, their chances for Coastal Cup championship will have to wait for next year, but the winner will book a place in the Canadian University Championship to be held in Kingston in November.

This will be a game eagerly anticipated. The undefeated Pride against perennial Premier contenders UBC. UBC lost one match to Vancouver Wave so this is a must win for them, a second loss and they're basically out of contention for top spot. The Pride feature two returning alumni, Quinn Ngawati and Mason Flesch, no doubt getting in some playing time before the Portugal/Belgium games. James O'Neill wasn't dressed for the Pride's last match but looks match fit again. Cody Nhanala is back in the roster after sitting out a suspension dating back to 2020. For UBC Cali Martinez gets the start at tighthead and it should be a good battle against Emerson Prior of the Pride. There are 3 Carson's starting and one on the bench. It should be a close match but going with the undefeated side. Prediction: Pride by 3.

A must win for TWU but this is likely not the year they go to the University Championships to be held in Kingston next month. Next year UBC are hosting so if they get automatic qualification, TWU would be in if BC gets two additional spots. TWU have put in good efforts this season but they've lost their 3 matches by an average of 35 points per match. UVic are also 0-3 and may be the second weakest team in the league. UVic have lost their 3 matches by an average of 9 points per match. TWU have Guiseppe du Toit back in the lineup, he scored both tries for TWU in their Week 1 loss to UBC, du Toit will be going up against his former team. UVic are missing their star player, #8 Nick Carson, so this may be closer than anticipated. Their first string #10 Logan Martin-Feek is still out and Gabe Casey will come in from his normal centre position to lead the backline. If you compare the average loss differential between the two teams and half that due to the personnel changes, we come up with our number. Prediction: UVic by 13.

Vancouver Wave are the only other undefeated team in the league, besides the Pacific Pride. Van East narrowly got by the 14 man Tide last weekend. Both teams looked convincing against TWU. Van East put in a good 40 minutes against the Pride in their first match but fell off in the second 40. The Wave established their reputation early but taking down one of the pre-season favourites, UBC. The Wave coach, Christiaan Esterhuizen, is starting to develop a reputation here, from South Africa, he coached the University of Cape Town team. A loss for Van East will all but eliminate their chances of winning the inaugural competition, a win and they're still in the race. A win for the Wave will see them keep pace with the Pacific Pride, pending their match result vs UBC. Prediction: Wave by 5.

An exciting Week 5 in the Coastal Cup sees the season roll into the second half, with Saturday featuring two games on Vancouver Island and one in Burnaby, B.C.

The opening match of the weekend sees UBC (2-1) travel to play the undefeated Pacific Pride (3-0) at the Port Alberni Black Sheep Rugby Club, with kickoff set for 1 p.m. (PT). The other two matches both start at 2:30 p.m. (PT) with Trinity Western (0-3) visiting the UVIC Vikes (0-3) at Wallace Field and the Vancouver Wave (2-0) travelling to play Van East Rugby (2-1) at the Burnaby Lake Rugby Club. The Crimson Tide (1-2) have a bye.

Click here to WATCH the Coastal Cup LIVE throughout the season.

UBC travels to Port Alberni to take on the Pacific Pride in what marks the Thunderbirds opportunity to wear their specially designed Thunder Rugby jerseys, which were created by Indigenous artist Richard Hunt, in an effort to raise funds for Thunder Rugby. The Thunderbirds game worn jerseys – No. 1 through No. 15 – will be auctioned off, with proceeds going to the Thunder Indigenous Rugby program.

The game itself features a Pride side that is three for three so far in Coastal Cup action and returns to the pitch with a bolstered lineup that includes both Mason Flesch in the second row and Quinn Ngawati at inside centre, as they return from their time with Canada’s senior men’s team.

The Pride also have Tyler Wong coming in at hooker, Taitusi Vikilani entering at blindside, Oliver Mackenzie jumping in on the wing and Max Stewart slotting in at fullback.

UBC is coming off a win over UVIC at home last weekend and will play their first game away from the Gerald McGavin Centre this year.

In the pack, the lone personnel change sees Joshua Downes enter on the open side, while Donald Carson moves to second row and Owain Ruttan swaps sides at flanker.

After starting on the bench against the Vikes in his return to the Thunderbirds, Jack Carson represents Curry Hitchborn’s only change amongst the UBC backs, as he jumps into the starting mix at scrumhalf.

An exciting matchup between the two Lower Mainland regional sides sees the Wave put their so-far perfect record on the line against a Van East side whose lone loss came against the table-topping Pride.

Both teams are coming off wins, with the Wave recording a resounding 53-point win over Trinity Western and Van East pulling away for a 10-point victory against the Crimson Tide. The game features the top two point-scorers in the Coastal Cup, with the Wave having Mike Moloney, who has three tries and 45 points, and Van East boasting Brian Fitzpatrick, who has a league-leading six tries and 30 points.

Van East will run out an unchanged forward group, with only two alterations amongst the backs. The Burnaby boys will change up their wings, with Kish Karunathasan and Jack Gelbart entering as starters.

In a similar story, the Wave only make one change up front with Wes Lee coming in at No. 8 for Brian Moylett. In the backs, Isaac Winter is in at inside centre, with a few moving parts around him, including, Josh Powdrell switching to right wing and Johnny Franklin sliding from inside centre to the wing.

At Wallace Field, a national championship tournament berth will be on the line, with the winner of the game between TWU and UVIC advancing to the Canadian University Men's Rugby Championship in November in Kingston, Ont.

Both teams are winless in the competition so far, but a victory on Saturday would give the winning side a tasty carrot to look forward to following the Coastal Cup competition. The top two B.C.-based university teams in games between themselves earn qualification for the national tournament. With UBC beating both UVIC and TWU, the Thunderbirds earned top spot, with the second berth to be settled in Victoria.

The Spartans travel to UVIC with an exciting lineup that sees a variety of players return to mix – most notably Canadian international and Toronto Arrows centre Guiseppe du Toit coming back into the lineup after missing TWU’s last two games while on the injured list. The Spartans are also bolstered by the return of Erik Niebuhr in the second row, Caleb Gerth at No. 8 and Jan Lourens at scrumhalf. Scott Bowers is also back starting at hooker after coming in as a second half substitution last week.

After Vikes coach Scott Manning had managed to keep a remarkably consistent starting lineup through the first half of the Coastal Cup, this week’s roster sees five changes following last week’s loss to UBC. The Vikes Asfand Yar Saeed joins the second row while Zarija Djurickovic comes into a starting role at blindside. Meanwhile, Benjamin Newhook will take the No. 8 jersey, replacing Nicholas Carson.

Amongst the backs, Gabriel Casey moves to flyhalf, with Graeme Norris slotting into to Casey’s vacated outside centre position.