The Canadian men's XVs team will end a horrendous year with one bright glimmer, a win against Belgium with 14 men. Michael Smith received a red card at the 17 minute mark and Canada had to play short for the remainder of the match. The play looked innocuous enough in real time, the ref didn't pick it up but the TMO did after the fact. Smith's shoulder made contact with a player's head while the player was on the ground trying to wrestle the ball away from Tyler Rowland.

Canada were ahead 10-0 at the time due to a Corey Thomas try set up by a Ben LeSage break. That try came early at the 3 minute mark. Povey added a penalty at 13' and that's the way the half ended.

Eric Howard picked up a yellow at 46 minutes when he over enthusiastically cleaned out a player at the ruck by lifting and flipping him. That put Canada at 13 vs 15 for 10 minutes and this is when the game was won by Canada with staunch defence. Canada actually were the ones to score while down two players with Spencer Jones now taking kicking duties, and he slotted over a penalty at 55 minutes, 13-0. Spencer Jones was hot with the boot on the day and he kicked penalties at 62 & 64 minutes, 19-0.

Belgium gifted Canada the final try at 76 minutes when they put a pass on the ground which was picked up by Canada and hoofed down the field. Lloyd chased and at the ruck the ball came out, Ross Braude was on the spot to pick it up and dive over the line, unconverted, 24-0.

It was a gritty win, playing 13 vs 15 for 10 minutes and 14 vs 15 for over 50 minutes. However, in perspective, it was against a poor opponent and it won't take away the bitterness of leaving the World Cup qualifying path at the hands of Chile.

On the day Ben LeSage and Kainoa Lloyd were the backline attacking threats, as they have been throughout the summer and fall. Spencer Jones did well, making line breaks, distributing the ball and bringing a top level kicking game. Corey Thomas has been the top forward, always in support and scoring tries as a result.

The national team now goes into a dormant period with players preparing for their next challenge. Most will be getting ready for a MLR preseason starting in January, some will be going with the national 7s program or back to the Pacific Pride development program.

The big question is what will happen to the coach, is Kingsley Jones the person to lead Canada forward after failing the RWCQ task. Many think not but his fate will be up to the CEO, Allen Vansen, whose own fate is in the hands of the Rugby Canada Board.

Isaac Olson will get his first cap on Saturday as he starts on the wing, Olson has been playing with the Pacific Pride development program. Foster DeWitt is also in line to earn his first cap as he comes off the reserves bench at prop. Dewitt is a utility forward and can play any of the front row positions but he's slotted in as tighthead replacement in this match behind Tyler Rowland.

Mason Flesch and Lockie Kratz are in line to earn their second cap when they come in as impact players.

The forwards are similar to the Portugal match with the following changes, Jake Ilnicki is out at tighthead with Tyler Rowlands moving from the bench to starter and Foster Dewitt taking the bench position. Siaki Vikilani is out at #8 with Corey Thomas taking his spot from the bench. Mason Flesch moves onto the bench to provide cover, along with Josh Larsen.

In the backs Jason Higgins get the start ahead of Ross Braude, and Isaac Olson starts at wing, moving Brock Webster to fullback. Rob Povey and Lockie Kratz provide cover.

This, hopefully, should be a comprehensive win for Canada. Not only are Belgium ranked well below Canada, they are not fielding their top side. Listening in on a Twitter conversation "Tier 2: A very young group with several debutants and missing their players in Pro D2. Even in the state they are in Canada must surely expect to win this with some comfort. Bryan Ray: if not we're in worse shape than we thought... I make it 11 uncapped players and almost the entire first choice forward pack missing".

We counted 10 players from the Brussels Devils, a team that plays in the inaugural Rugby Europe Super Cup. The Super Cup is a new competition involving teams from Tier 2/3 nations such as Portugal, Spain, Netherlands, Belgium, Russia, Israel, Georgia. The Brussels Devils are in last place in the western division. They lost their last match on October 30th to Lusitanos, a Portugese side, 38-13. You can watch that match below.

The game according to Rugby Canada will be streamed on World Rugby's YouTube channel. They stated in their press release it was at 3am PT but have since corrected to 6am PT. More info at: 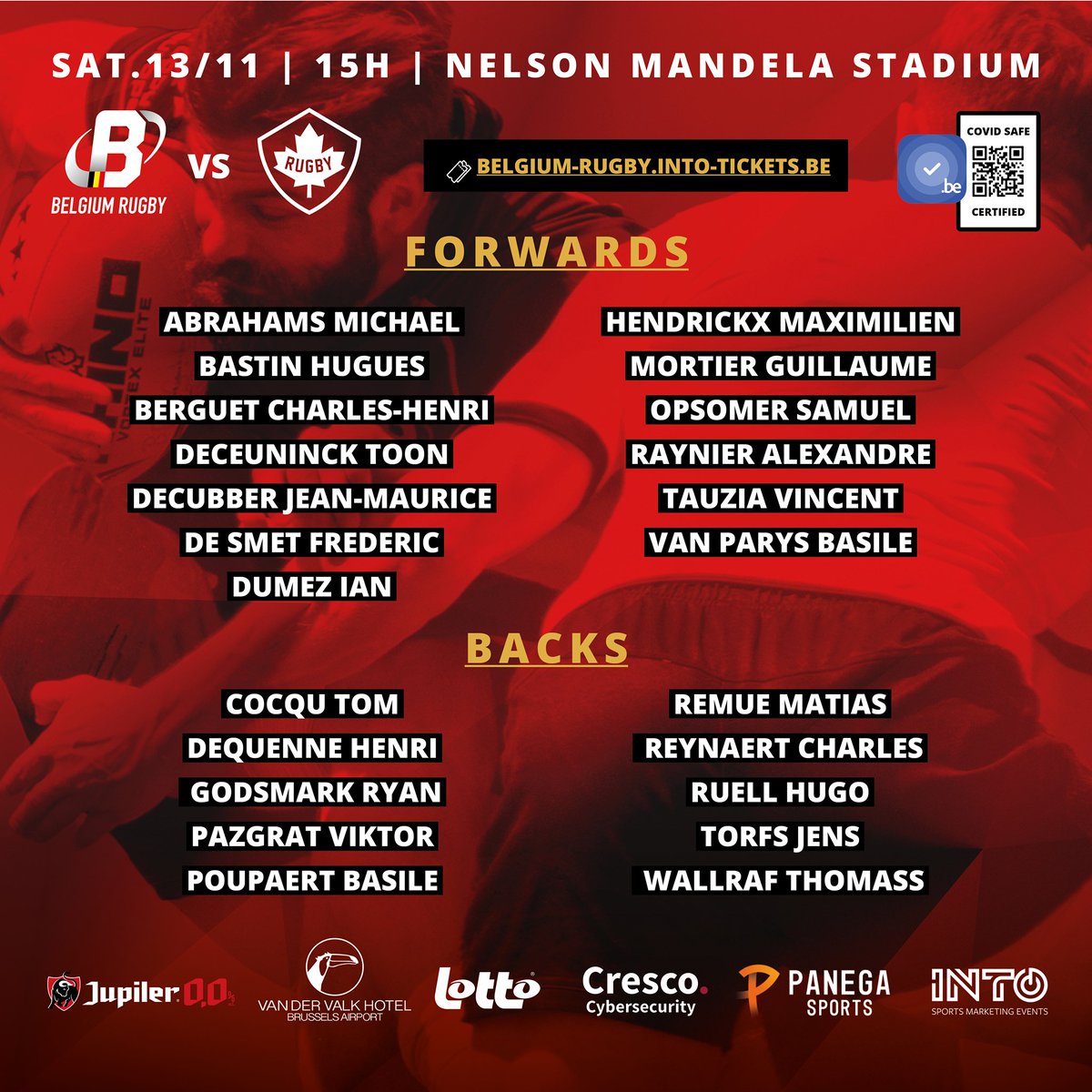 The following players are on the Brussels Devils (match vs Lusitanos).

Canada will be looking to finish the year on a high note after a narrow, last-minute loss to Portugal last weekend. Jones’ lineup against Portugal featured a familiar group from the team’s most recent matches, with players such as Cole Keith, Michael Smith and Quinn Ngawati shifting to starting roles. Corey Thomas led Canada’s attack versus Portugal, capturing a brace, while teammates Cole Keith and Rob Povey contributed a try and conversion, respectively.

“Our players have remained positive through a tough run of matches,” said Jones. “I’ve been really impressed with this group and I am looking forward to seeing how they respond in the final match of the year.”

The starting line-up versus Belgium shows four personnel changes and one positional change from last week’s team. Tyler Rowland, Corey Thomas, Jason Higgins and Isaac Olson all move into the starting line-up. Thomas, who has been playing throughout the back five for Canada, gets the start at #8 while Higgins at scrumhalf gets his first start for Canada having played as a reserve over the past five matches. Olson starts on the wing and will earn his first cap for his country, which allows Brock Webster to move from wing to fullback for this match.

Ranked No. 28 in World Rugby’s Men’s Rankings, Belgium will be looking to gain valuable minutes for their players in what will be their third test of 2021. The team’s most recent match in May saw them drop a close 23-21 decision to the Netherlands in the Rugby Europe Championship.

Kick off for Friday’s match versus Belgium is set for 6:00am ET/3:00am PT. The match will be live streamed on World Rugby's (world.rugby) website and World Rugby’s Facebook and YouTube channel. Url to website: https://www.world.rugby/tournaments/november-tests/watch-live