The Vancouver Wave won the inaugural Coastal Cup championship with a 26-17 win over the Pacific Pride national development academy. The Wave led throughout and were up 16-5 at the half. They were up 26-5 with a few minutes left before the Pride answered back with two late scores. 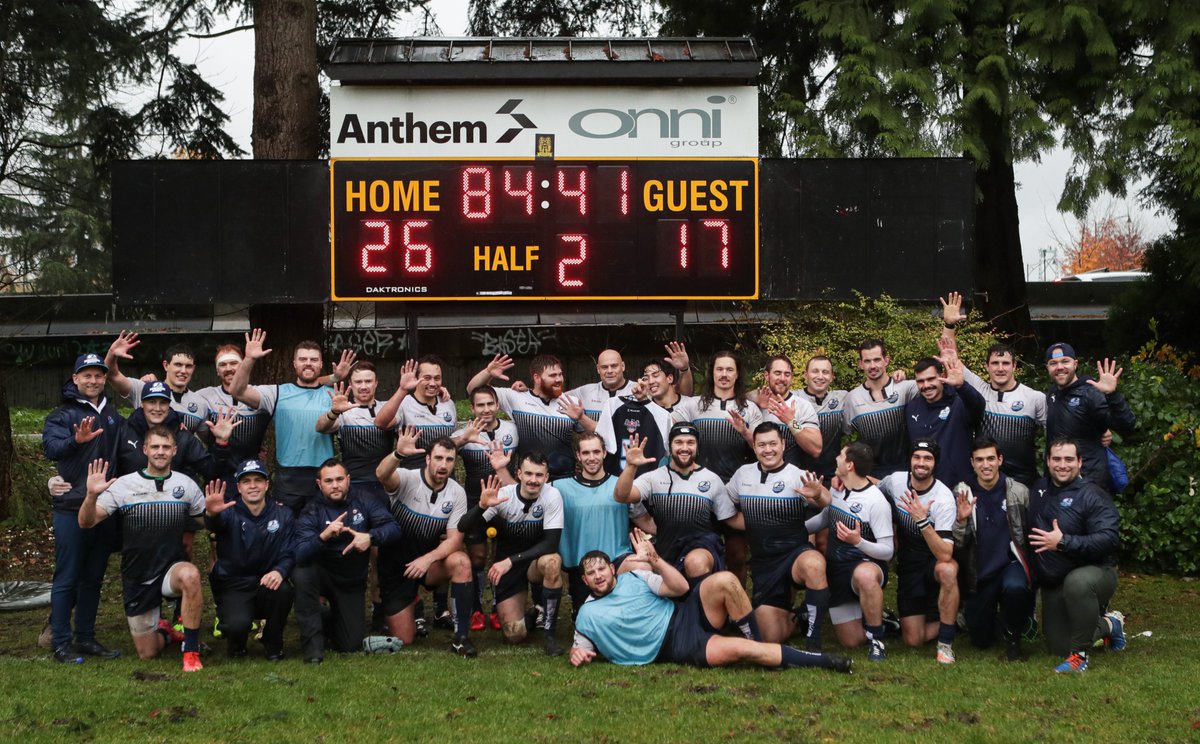 UBC finished their Coastal Cup season on a high with a 31-20 win in Victoria over the Crimson Tide. They finish with a 4-1-1 record, the same as the Pride.

Mark Janzen has done a good review below so I won't repeat his observations. I'm picking the Wave to win the title this year, they're undefeated, they have a consistent lineup, they're playing at home. The Pride are missing some key players as the XVs and 7s programs call up players. Foster Dewitt and Isaac Olson are in Belgium with the XVs, and several players who starred in the Pride's recent performances, Cody Nhanala, Sion Griffiths, Brennig Prevost and Jake Thiel, are with the 7s group as they prepare for Dubai in 13 days. They're playing ranks are so low they haven't filled the #20 jersey and may put out 22 players. We hear reinforcements are coming in January but it won't help this weekend. Prediction: Vancouver by 8.

The UBC v Tide match will another top contest. UBC are hitting their stride and, again, will rue that one loss to Vancouver which cost them a chance for the title. They are one of the on form teams evidenced by their lopsided win over Van East, a very good squad, last weekend. They're peaking for the University Championships taking place in Kingston later this month. The Tide played Vancouver close, only losing at the whistle to a penalty kick, so they can bring their A game when pushed. They're missing Mike Fuailefau this weekend, likely off with the 7s. Prediction: UBC by 5.

The inaugural season of the Coastal Cup comes down to one final game at Klahanie Park (1 p.m. PT), featuring the first-place Vancouver Wave (5-0) against the second-place Pacific Pride (4-0-1). With just one point separating the two teams, Saturday’s contest is something of a defacto final, with the winner earning the right to hoist the Coastal Cup.

Kudos to the schedule maker who put together what amounts to a final on the last weekend of the Coastal Cup, as the two top teams and the only undefeated squads squaring off for the right to take home the title.

The Vancouver Wave are coming off a 37-31 win over the UVIC Vikes, while the Pacific Pride enter the weekend off a bye, having last played Oct. 30 when they beat Trinity Western 46-17.

The Pride will make two personnel changes to their forward unit, with Dewald Kotze coming back in at hooker and Matt Klimchuck slotting in at blindside flanker. In the front row, Emerson Prior moves to loosehead, while Liam Murray jumps to tighthead.

Mark Balaski returns to flyhalf, with Max Stewart going to fullback and Dawson Fatoric moving to inside centre. Taylor Desouza goes to outside centre, with Gabriel Smith entering the mix on the wing.

For the Wave, the only personnel change amongst the forwards is Mark Paddock entering into the second row, which sees Darragh Foley move to blinside flanker.

Amongst the backs, Thomas Viljoen is in at scrumhalf and Josh Powdrell returns on the wing, marking the Waves only two moves to their starting lineup.

While the feature matchup of the day is happening at Klahanie Park, the final game of the Coastal Cup sees UBC travelling to Victoria to take on the Crimson Tide.
The Thunderbirds will look to cap their season with a victory and solidify themselves into the upper tier of the Coastal Cup. After a resounding 35-7 win over Van East last week, UBC has shown to be very much running alongside the likes of the Wave, who was the only team to beat UBC (34-22) and the Pride, who the Thunderbirds tied 10-10. On the other side of the ball, the Crimson Tide will be targeting a successful end to what has been an up and down campaign. While they only have two wins from five outings, the Tide only lost by one point against the undefeated Wave two weeks ago before beating Trinity Western on the road last week. A win over UBC this Saturday would put a very nice bow on the season.

Up front, the Tide have two personnel changes with Maks Foot coming into the second row and Aidan Holland entering at blindside flanker. Ollie Nott moves to the open side, with Zephyr Melnyck back in at No. 8. Amongst the backs, the Tide will make three changes, with Isaac Gonevou coming in on the wing, Thomas Burton entering at inside centre and Tyler Hume jumping into the mix at outside centre. Mostyn Findlay moves from outside centre to fullback.

It took until the end of the season, but the Thunderbirds will finally give the fans the full Carson contingent, with five Carsons named to the starting lineup. Hillyard comes in to start in the second row, where he joins David, while Frank moves to blindside where he is opposite Donald. Jack returns at scrumhalf. Beyond the Carsons, the UBC front row sees props Joshua Tweed and Calixto Martinez getting starting roles. Meanwhile, Relmu Wilson-Valdes gets his first start of the year at No. 8.

Amongst the backs, Evan Norris comes in on the wing and Connor Byron enters at outside centre, with Ryan Leskiw flipping to the left wing, Landon Cliriminos going to inside centre and Takoda McMullin set to play fullback.