The UBC Thunderbirds hoisted the trophy at the end of the Canadian University Men's Rugby Championship (CUMRC) after defeating the Victoria Vikes 39-7 in the Gold Medal Game.

The Thunderbirds got on the board with an Owain Ruttan try three minutes into the game and never looked back on their way to a 32-point win in the championship game.

Connor Sampson, Alfie Scopes, and Connor Byron also scored tries for the Thunderbirds. The scorer was undetermined on one UBC try.

Jonas Robinson scored the lone try for Victoria, converted by Chris Gamage, in the loss.

UBC opened their tournament with a 66-0 win over the RMC Paladins in the quarterfinals before defeating the host Queen's Gaels 41-20 in the semifinals.

Victoria defeated Dalhousie Men's Rugby 72-0 in the quarterfinals and the Guelph Gryphons 29-22 in the semifinals.

It will be the two BC universities in the final this year, guaranteeing the continuation of BC dominance in the men's university game. UBC have won 2 of the 3 titles and UVic have won the other title in the fairly new competition initially funded by the Canadian Rugby Foundation.

UBC will go in as favourites based on recent meetings between the teams in the Coastal Cup competition.

There's likely a Carson who will star in the match with brothers Don, Frank and Hillyard on UBC along with cousins Jack and David. On UVic is cousin Nick Carson suiting up at #8.

The match kickoff is at 12:30pm PT and is streamed on the Queen's YouTube channel.. The stream starts at 6am PT with Dalhousie and RMC battling it out for 7th place, 8am Concordia v Calgary for 5th, 10am Guelph v Queen's for 3rd.

The UBC Thunderbirds will be playing in the Canadian University Men's Rugby Championship (CUMRC) game after defeating the host Queen's Gaels 41-20 in Championship Semifinal 1 at Nixon Field on Friday.

The semifinal matchup was close through the first 25 minutes, with UBC holding a 15-13 edge early, before the Thunderbirds took over and scored 26 straight points on their way to the 21-point win.

Jack Carson opened the scoring for UBC with a penalty convert and would later add a convert after a try and a try to finish the game with 10 points. Max Abercrombie recorded three converts for the Thunderbirds while Takoda McMullin, Bryce Worden, Ryan Leskiw, Frank Carson, and Owain Ruttan all added tries for UBC in the win.

Thomas Kirkwood led the Gaels in the losing effort with one try, one convert, and two penalty converts. Santi Guadarrama added a try and a convert for Queen's.

The Victoria Vikes built a 19-point second half lead and held on to beat the Guelph Gryphons 29-22 on Friday at Nixon Field to advance to the Canadian University Men's Rugby Championship (CUMRC) Final.

The semifinal matchup was close through the first 20 minutes before Victoria built up a three-score lead early in the second half. The Gryphons staged a late comeback, scoring the game's last two tries, but it wasn't enough as the Vikes won by seven points to advance to the championship game.

UBC and UVic Advance to Semis with Big Wins on Day One: Match Recaps and Scoring Summaries

UBC and UVic advanced to the semis with shutout wins on Day One. UBC defeating Royal Military College 66-0 and UVic defeating Dalhousie 72-0.

The match recaps and scoring summary are posted below courtesy of the tournament website.

The starting rosters weren't provided, we managed to get the UBC starting XV, which is also appended below.

On Friday the semis will see UBC take on Queen's and UVic take on Guelph.

The UBC Thunderbirds opened the 2021 Canadian University Men's Rugby Championship (CUMRC) with a big 66-0 win over the RMC Paladins in the first quarterfinal of day at Nixon Field in Kingston, Ont.

UBC opened the scoring with a try from Connor Byron in the first minute and never looked back. The Thunderbirds were led by Max Abercrombie, who finished with a game-high 16 points off eight converts. Ethan Berry and Evan Norris scored a game-high two tries each for UBC in the win.

Other scorers for the Thunderbirds included Jacob Bourne, Relmu Wilson-Valdez, Joshua Downes, Connor O'Flaherty, and Ryan Leskiw, all with one try each.

The Guelph Gryphons got off to a winning start at the 2021 Canadian University Men's Rugby Championship, defeating the Calgary Dinos 34-5 in Quarterfinal 2 at Nixon Field in Kingston, Ont. Wednesday.

Jacob Ince opened the scoring for Guelph in the second minute before Max Goodwin doubled their lead in the 14th minute. Evan Raymond added a third try, converted by Aria Keshoofy, in the first half to give Guelph a 17-0 lead at half time.

The Gryphons added tries by Alex Williamson, Ben Clack, and Alex Chaffey in the second half, with Darian Hirst kicking a successful convert on Chaffey's try.

Adham Young would score a try for Calgary late in the second half.

Guelph advanced to the Championship semifinals on Friday, Nov. 26 where they will take on the winner of Quarterfinal 4, played tonight at 7:30 p.m., between the Victoria Vikes and Dalhousie Men's Rugby. With the loss, Calgary will compete in the Consolation semifinals against the loser of Quarterfinal 4.

(Kingston, Ont.) - After a close first half, the Queen's Gaels pulled away from the Concordia Stingers after half time to win their quarterfinal matchup at the Canadian University Men's Rugby Championship 38-22 on Wednesday at Nixon Field.

The host Gaels and the Stingers traded leads throughout the first half, with Queen's holding a small 14-12 lead heading into half time. The Gaels outscored the Stingers 24-10 in the second half on their way to the 16-point win.

Thomas Kirkwood and Rien Van Der Ploeg led the way for the Gaels. Kirkwood finished the game with four converts and one penalty convert, while Van Der Ploeg recorded a game-high two tries.

Neil Trainor, Stefan Zuliani, and Will Matthews also scored tries for the Gaels while Santi Guadarrama added a convert.

With the win, the Gaels advanced to the Championship semifinals where they will take on the UBC Thunderbirds on Friday, Nov. 26 at 5 p.m. The Thunderbirds opened the tournament with a 66-0 win over the RMC Paladins. Tickets for the game are on sale now and can be purchased here.

Concordia will compete in the Consolation semifinals, where they will meet the Paladins on Friday at 11 a.m.

Players of the Game: Queen's - Will Matthews / Concordia - Aidan McMullan

(Kingston, Ont.) – The Victoria Vikes closed out the first day of the Canadian University Men's Rugby Championship with a 72-0 win over Dalhousie Men's Rugby in Quarterfinal 4 at Nixon Field.

The Vikes opened the scoring in the fourth minute when Jonas Robinson scored his first of two tries in the game and never looked back on their way to the big win.

Ethan Smith connected on four converts while Austin Pinnell added two converts for the Vikes in the win.

With the win, the Vikes advanced to the Championship semifinals on Friday, Nov. 26 at 7:30 p.m. EST where they will take on the Guelph Gryphons, who defeated the Calgary Dinos earlier Wednesday.

Dalhousie will compete in the Consolation semifinals against Calgary on Friday at 2 p.m.

The tournament kicks off in Kingston on Wednesday at 8am PT with #1 seed UBC facing Royal Military College. The way the quarter-finals and seedings are chosen, it will likely see a UBC v Queen's semi and a Guelph v Vikes semi. UBC won the first two tournaments and UVic won the last tournament. The tournament has been hosted in Ontario twice, Quebec once and in BC once. Next year it will be hosted by UBC. 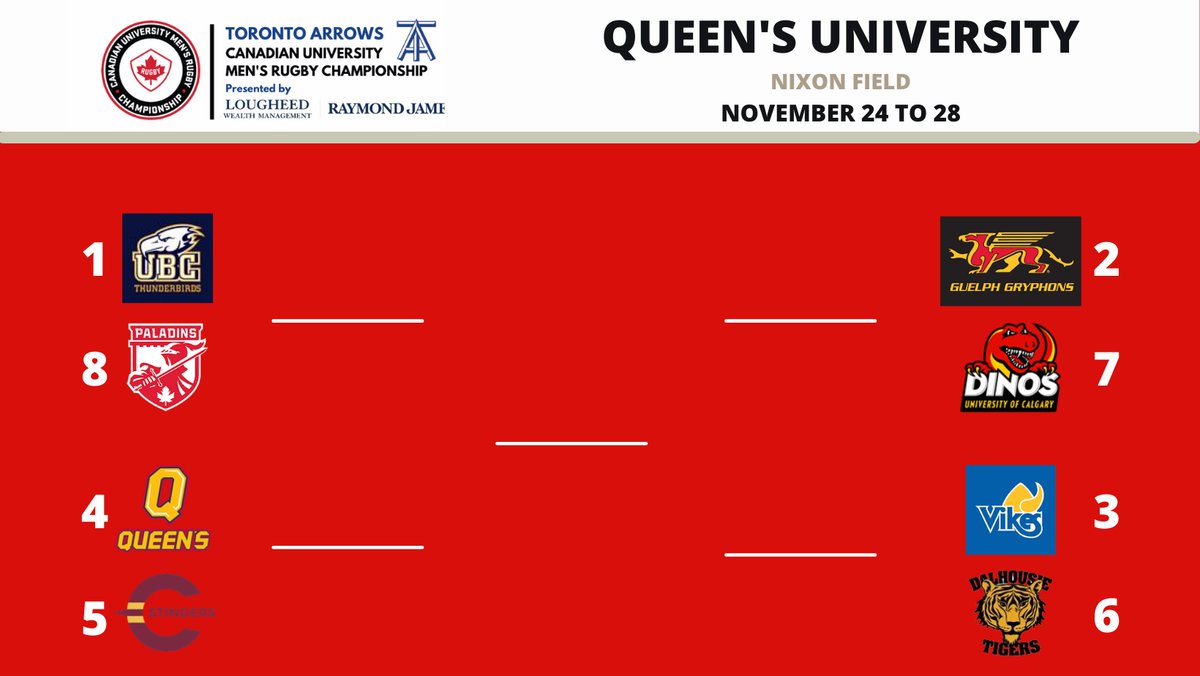