Canada East go into Day 2 in the lead with a 3-0 record. Photos from Day 1 can be viewed at this link.

[ed. we've heard the venue has been changed from Westshore to UVic, this is now confirmed. The high school list is also changed, we've posted the revised schedule below.]

The schedule is below as are the rosters for the Canadian teams. There is a USA team listed, we assume it's an academy team but we don't know much about its composition. 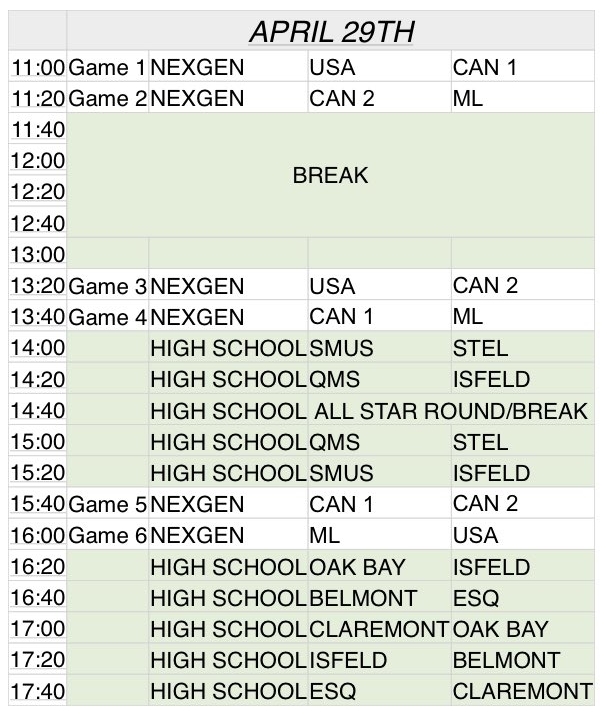 Rugby Canada is delighted to confirm the return of the NextGen Women’s Sevens tournament and the coaching staff of the three Canadian teams taking part, all of which will be led by female head coaches.

The event will get underway at the Juan de Fuca Recreation Centre on Friday, April 29 followed by the play-off rounds at Starlight Stadium in Langford, BC on Saturday, April 30, aligning with the first day of the HSBC Canada Women’s Sevens. Tickets for the HSBC Canada Women's Sevens event can be purchased here.

The Canada East Selects will be led by Jocelyn Barrieau, Head Coach of Concordia University. She will be assisted by Head Coach of the Montreal Carabins, Mitch Francois. A former player, Barrieau has been coaching in Quebec for many years and has played a crucial role in the program’s success. She will also coach Team Quebec at the upcoming Canada Summer Games in April.

“I’m so excited to be able to support the development of rugby in our country by coaching this talented group of athletes,” Barrieau said. “The fact that we can mirror the HSBC Canada Women’s Sevens tournament and give our next generation of athletes a side-by-side experience with the world's best is great foresight and planning from the team at Rugby Canada."

'I'm really looking forward to this opportunity to work with the next generation of Canadian rugby superstars,” Francois added. “I think we have gathered an exciting crop of hungry and talented athletes for this tournament, and I am looking forward to seeing how they do in this context.'

The East Selects will include representation from five universities in Eastern Canada. Many of its players were identified through 15s competitions held in the Fall and through the NexGen Sevens camp run in early March.

The Canada West Selects will be led by Chelsea Ross, coach of the University of Alberta Pandas, who will be assisted by Daniel Valley, coach of Queen’s University and former National U18s Women’s 15s Head Coach.

Ross has also been named as Head Coach for the Alberta team heading to the Canada Summer Games. She was a recent recipient of a professional development bursary and is relishing the chance to work with a team full of talent. She said: “To get to coach and build connection with the athletes and staff will be an invaluable experience."

Coming off a U Sports National Championship with Queen’s Gaels, Valley added: "I’m excited to work with this group of athletes and to build depth and capacity in the future. It’s a great chance for U Sports student-athletes to showcase the quality of development that is happening coast to coast."

This will be the first competition for the Maple Leaf Academy since they transitioned from a U19 program to a university-targeted age group. Head Coach Kelly Russell will be joined by longtime teammate and recent Rugby Canada Hall of Fame Inductee Mandy Marchak on the coaching staff.

Rugby Canada and the National Senior Women’s Sevens Program are proud to support this tournament and are looking forward to seeing these teams showcase their on-field abilities.