BC Win U19 Canadian Rugby Championships with 4-0 Record: Defeat Quebec 27-10 in Final Match

[ed. we didn't have the starting roster for this match so referenced the player's number in the match summary.]

A good result for BC as they maintain their strong winning record at the U19 level. At least six of the BC players will continue on next weekend for Canada U20 as they host Zimbabwe, Chile and Uruguay. 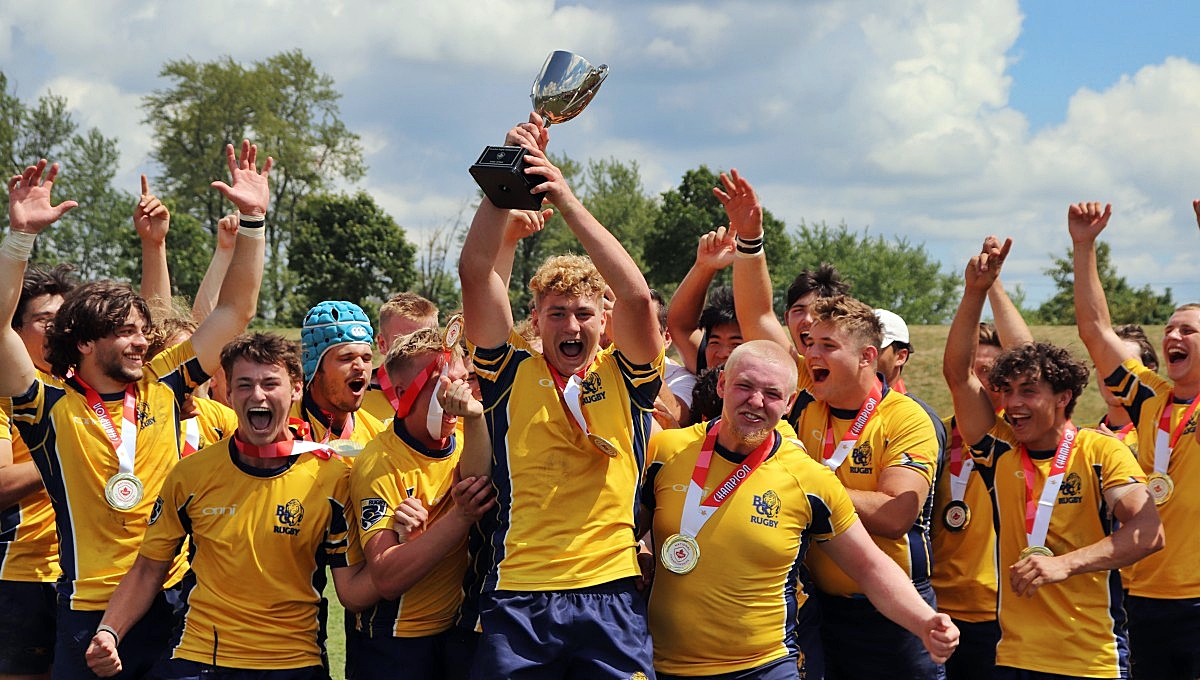 Quebec scored first off a lineout and maul at the BC 5 metre line after BC took a series of penalties. The try was converted, 7-0 Quebec 5 minutes in.

BC scored a few minutes later on the wing after a series of strong runs launched from an attacking scrum on the Quebec 22. The conversion from the sideline was missed, 7-5 Quebec with 9 minutes gone.

Quebec added another 3 points from a penalty kick, 20 minutes into the match, 10-5 for Quebec.

BC opened the scoring in the second half, #10 was stopped at the goal line and #8 dove over from the ensuing ruck. It looked like #10 was injured on the play and a new kicker came on and the conversion was missed, 17-10 for BC.

BC scored another try from a lineout and maul. The maul was stopped but #12 had a strong run towards the line and #8 again picked the ball up from the ruck and dove over the line. Conversion was missed, 22-10 for BC.

BC's final try came from backline play with the fullback taking a flat pass at pace and carrying the defenders over the line, again unconverted, 27-10 final.

BC Remain Undefeated at U19 Championship with 24-10 Win Over Ontario: MATCH VIDEO

Owain Cormack at #10 got the scoreboard ticking with a penalty kick after Ontario were called offside inside their 22. Ontario responded with a penalty of their own, 3-3, with about 8 minutes gone. Cormack kicked another penalty 18 minutes in to give BC a 6-3. At the 37 minute mark BC scored a try from big #11, Alastair Marshall, who took a pop pass from the scrum half off a BC scrum at the Ontario 5 metres. Marshall beat a couple of tacklers to score under the posts. Marshall was named to the Canada U20 squad today as well. It was now 13-3 BC and that was the half time score.

Ontario scored first in the second half off a tap and go penalty 5 metres from the BC goal line, converted, it was now 13-10 BC. Taine Clague, the blindside flanker scored for BC midway through the second half. He was part of a backline move that saw the ball get outside to speedy winger, #14 Sam Brown. Brown weaved his way to a metre from the Ontario goal line, Clague in support picked the ball up from the back of the ruck and dove over the line. Clague is also one of the BC U19 players selected for Canada U20. The try wasn't converted, 18-10 for BC. Five minutes later Cormack added another penalty, 21-10 for BC. Cormack added the final score with a penalty kick from 47 metres out, final 24-10 for BC.

The tournament wraps up Saturday, BC will face Quebec and Ontario will play Atlantic Rock.

BC Face Ontario on Thursday August 4th in Battle of Undefeated

BC faces Ontario on Thursday, August 4 in what is being billed as a championship decider, before they finish up against Quebec on August 6. The Blues are also undefeated in their opening two matches, with victories over Alberta and Quebec.

While the matches are not live-streamed, all games will appear on the Rugby Ontario YouTube Page after they finish.

The BC Bears U19 Men’s team to face Ontario is as follows:

BC won their first two matches of the U19 Canadian Rugby Championship (CRC) being hosted by Ontario.

The videos are posted below.

BC face host Ontario on August 4th and finish the tournament on August 6th against Quebec. In other action Atlantic Rock defeated Quebec 38-5 and Ontario defeated Alberta Wolfpack 49-7. 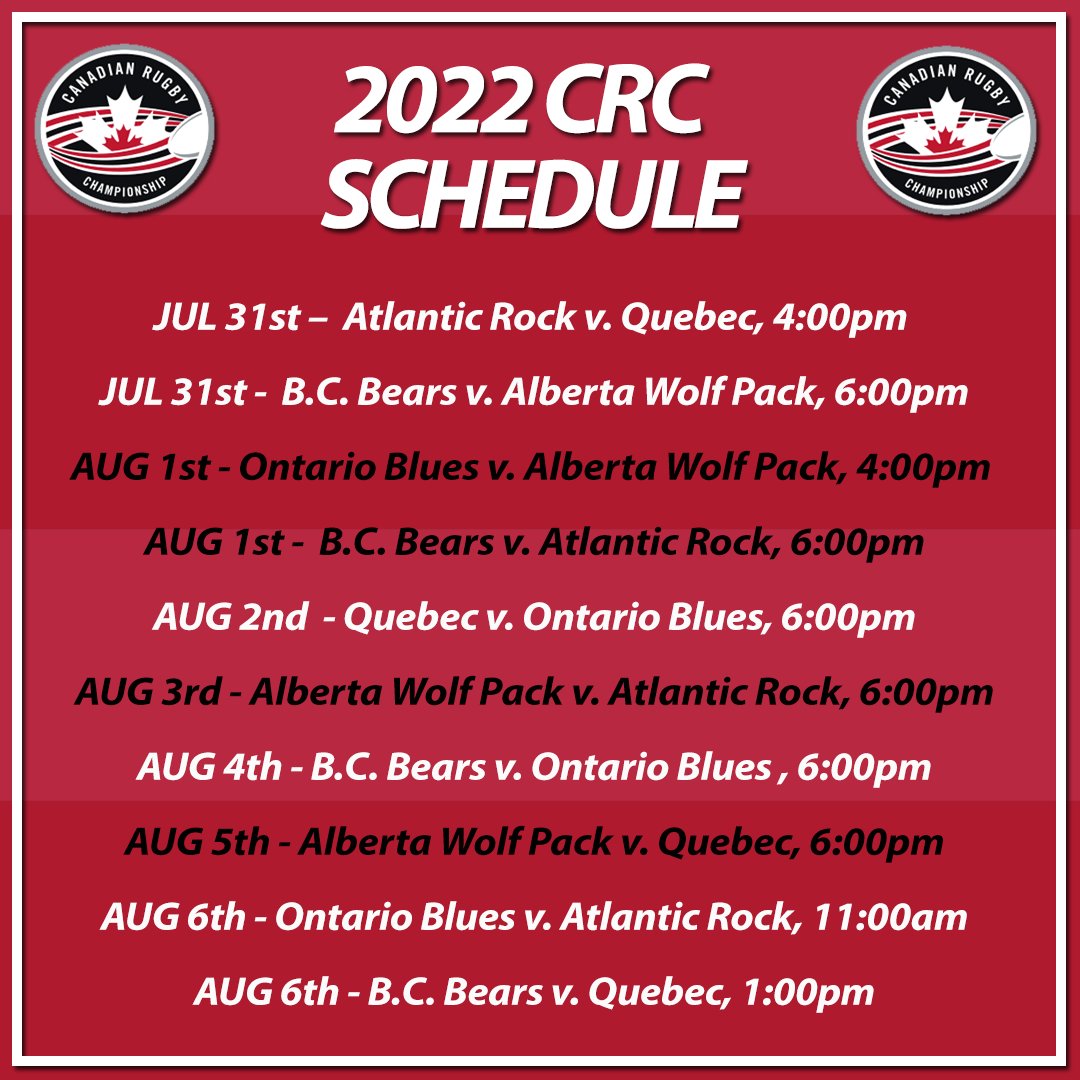 BC Rugby is pleased to announce the BC Bears U19 Men’s travelling roster for the upcoming 2022 Canadian Rugby U19 Championships in Guelph, Ontario.

Taking place at the University of Guelph on July 31-August 6, 2022, the U19 tournament returns to competition following a two-year hiatus in 2020 and 2021 due to the global pandemic.

The squad was selected following a successful BC Bears U19 Development Camp held last weekend at UBC’s Gerald McGavin Rugby Centre in Vancouver. Across four days, players from across BC took part in an array of drills, skill development challenges, and team-building exercises to help Coaching staff identify BC’s top athletes.

The BC Bears join 2019 champions Atlantic Rock, Rugby Ontario, Prairie Blizzard, Alberta and Quebec as the participating teams for this year’s edition of the Championship.

BC Bears U19 Men’s Squad