Rugby Canada finally issued a press release on the tournament they're hosting in nine days. They also named the Canada squad selected for the tournament.

We've posted the Rugby Canada press release below and we've added our BCRN notes on the players from information in our online article database.

A couple of interesting side notes, the head coach is listed as Adam Roberts, not Jeff Williams for this tournament. We understand Jeff is taking the summer off, there's no details on whether he will resume the head coach role moving forward. Also the Rugby Canada person quoted for the article, which was also released in part by World Rugby, is Dustin Hopkins, not Kingsley Jones who still has the title of Director of Men's Rugby Performance as far as we know. There was no mention of the new CEO, Nathan Bombrys, who is still MIA. Hopkins is mentioned in the article as Managing Director of Rugby Operations for those who are keeping track.

James Biss is probably the starting #10, he was the Canada U20 backup to Brock Webster in 2019. He was listed for the Pacific Pride in 2020 but we don't have any match reports mentioning him. He was listed as from Saracens Academy in the UK and is now listed at Durham University. He started at #10 for Canada in the Canada U19 v BC U19 match in July. Update: Biss will be at UBC next season.

Liam Bowman, another player who showed up in our 2020 preseason Pacific Pride list but is never mentioned in match reports. He was on the Canada U20 tour to Portugal in 2020 and played for Canada U18 in 2020 at outside centre. He also repped Canada at the World School 7s in 2019 (along with the two McMullins) with the Canadian Misfits team.

Alastair Bruce is currently repping the BC Bears at the U19 championship as a starting second row. He played for the Pride in 2022 and was on the Canada West team that won the Coast to Coast trophy over the Arrows Academy and the Atlantic Selects.

Ted Champion is listed as from Hong Kong and University of Arizona. We have no data on him in our database.

Taine Clague is the starting #6 for BC currently playing in the U19 Canadian Championship tournament. He played for the Island Tide in the Coastal Cup competition this year. His dad was a top club player for Westshore, originally from NZ, and now coaching youth rugby on the Island.

Jack East was the starting fullback for Canada in the Canada U19 v BC U19 played in July this year at UBC.

Michael DiLella Jr. listed as Guelph University. We have no other info in our database on him.

Adam Doyle, listed as Queen's University. We also have him listed on the 2020 Canada U18 team that toured to California and from Kingston Panthers.

Kobe Faust was also on that 2020 Canada U18 team at fullback and from Oshawa Vikings.

Ethan Fryer played for Pacific Pride last season then was picked up by the New England Free Jacks of the MLR later in the season.

Jamin Hodgkins is listed as Cardiff Met University, he also was on that 2020 Canada U18 team as #10.

Jacob Ince from Guelph University, also on the 2020 Canada U18 team as inside centre.

Sol Jacques from UBC and currently playing for BC at #8 at the U19 Canadian Rugby Championships. Also was on the Canada West Selects team that won the Coast to Coast Cup.

Ethan Jurgeneit from Trinity Western University, on the 2020 Canada U18 team as loosehead prop.

Alastair Marshall from UBC, currently playing for the BC team at the U19 Canadian Rugby Championships, he's a starting wing.

Tyler Matchem played for the Pride last season, could start at either loosehead or tighthead prop. Also on the Canada U18 team from 2020.

Takoda McMullin from UBC, played with his brother Talon in the centres for Canada in that July Canada U19 v BC U19 match. Also on the Canada U18 team from 2020 at inside centre.

Talon McMullin from Bayside RFC, was a part of that championship Canada West Selects team this year. Also on the Canada U18 team from 2020 at outside centre.

Joe McNulty, listed from Capilano RFC, is the starting tighthead for BC at the U19 Canadian Rugby Championship. Started at loosehead for Canada U19 when they faced BC U19 in July.

Medhi Porchet is listed as Stade Montois. He was starting loosehead prop for the 2020 Canada U18 team. He was on the Canada U20 team that toured to Portugal in 2020.

Lukas Schek is listed with the Canada 7s program, from Regina. He started on the wing for Canada in the July Canada U19 v BC U19 match.

David Scollon listed from Guelph University. He was starting hooker for the Canada U18 team in 2020.

Peyton Teneyche is listed from UBC. He was starting tighthead for Canada in the July Canada U19 v BC U19 match.

Logan Weidner listed currently with Brive RFC played second row for Canada in the July Canada U19 v BC U19 match. He was #8 for the Canada U18 team in 2020. Originally from North Vancouver.

Caden Wilson is currently one of the starting second row for BC at the U19 Canadian Rugby Championships.

Rugby Canada will host the U20s Canada Conference 2022, an international Men’s U20s tournament organized in partnership with World Rugby, in August at the University of Guelph in Ontario, Canada.

Before the World Rugby U20 Trophy returns in 2023, Canada has been selected to stage a replacement tournament from August 13-23 which will provide key high-performance competition for its Men’s U20 program, as well as those of participating unions Uruguay, Zimbabwe and Chile.

Supported by World Rugby, the U20s Canada Conference confirms the international federation’s commitment to support the rugby pathway for the next generation of rugby talent, who will eventually improve the competitiveness of their senior teams.

“We would like to thank World Rugby for giving us the opportunity to host this event,” commented Dustin Hopkins, Managing Director of Rugby Operations, Rugby Canada. “This tournament will provide much-needed game time for our U20s program in a competitive environment. We would also like to thank our venue, the University of Guelph, for their partnership. We look forward to staging a successful event.”

World Rugby Chairman, Sir Bill Beaumont, said: “U20 tournaments have proven to be a successful pathway for young talents in our unions to flourish, gain international experience and prepare for test rugby. Before the global World Rugby U20 Trophy return next year, we are delighted to support our unions and Rugby Canada in delivering the U20s Canada Conference, a fantastic opportunity for promising rugby players to compete at the highest level.”

Taking place in a round-robin format, the event’s first stage of matches will take place on Saturday, August 13, followed by subsequent rounds on Thursday, August 18 and Tuesday, August 23. The full schedule is below:

This is a non-ticketed event and fans who wish to attend the matches are encouraged to do so. Broadcast and partnership details will be confirmed in due course.

Ahead of the tournament, Canada’s Men’s U20s Head Coach Adam Roberts has named his 28-man squad. Sam Reimer, who has made his way through Rugby Canada’s Age Grade programs and has featured for Pacific Pride as well as the Toronto Arrows, is joined by the youngest Major League Rugby signee and fellow Arrow Kobe Faust.

Born and raised in White Rock, BC, brothers and multi-sport athletes Talon and Takoda McMullin are part of the roster, as is Lucas Schek, who has featured for Canada’s Senior Men’s Sevens program. Current Pacific Pride players Alastair Bruce, Jack East, Mathew Klimchuk and Tyler Matchem are also on the squad.

“We are extremely excited to be hosting the August test series with Zimbabwe, Chile and Uruguay,” said Roberts. “We have some very talented rugby players on our squad that are exciting to watch and who have come from a wide range of backgrounds. We look forward to what will be a thrilling event and an excellent showcase of the up-and-coming talent Canada has to offer.”

Uruguay, Chile, Zimbabwe Name Teams for U20 Tournament in Ontario: Canada Yet to Name Squad

Canada U20 are hosting Zimbabwe, Chile and Uruguay in a tournament that starts August 13th. Canada will play Zimbabwe on the 13th, Chile on the 18th, and Uruguay on the 23rd. Rugby Canada haven't released many details on the tournament even though they're hosting. We haven't seen the specific venue mentioned or a link to tickets or if there will be a live stream. It's not currently listed on the Rugby Canada events page.

The visiting teams have announced their travelling squads however.

Canada's first opponent may surprise some, they defeated Namibia 19-14 in April to claim the Rugby Africa U20 Barthes Trophy. The U20 program maintain their own facebook page called the Junior Sables, link is here. On July 14th they named a 36 player squad.

One of the favourites in the tournament with the highest ranked senior team. They announced their 28 player squad via their website on August 2nd. 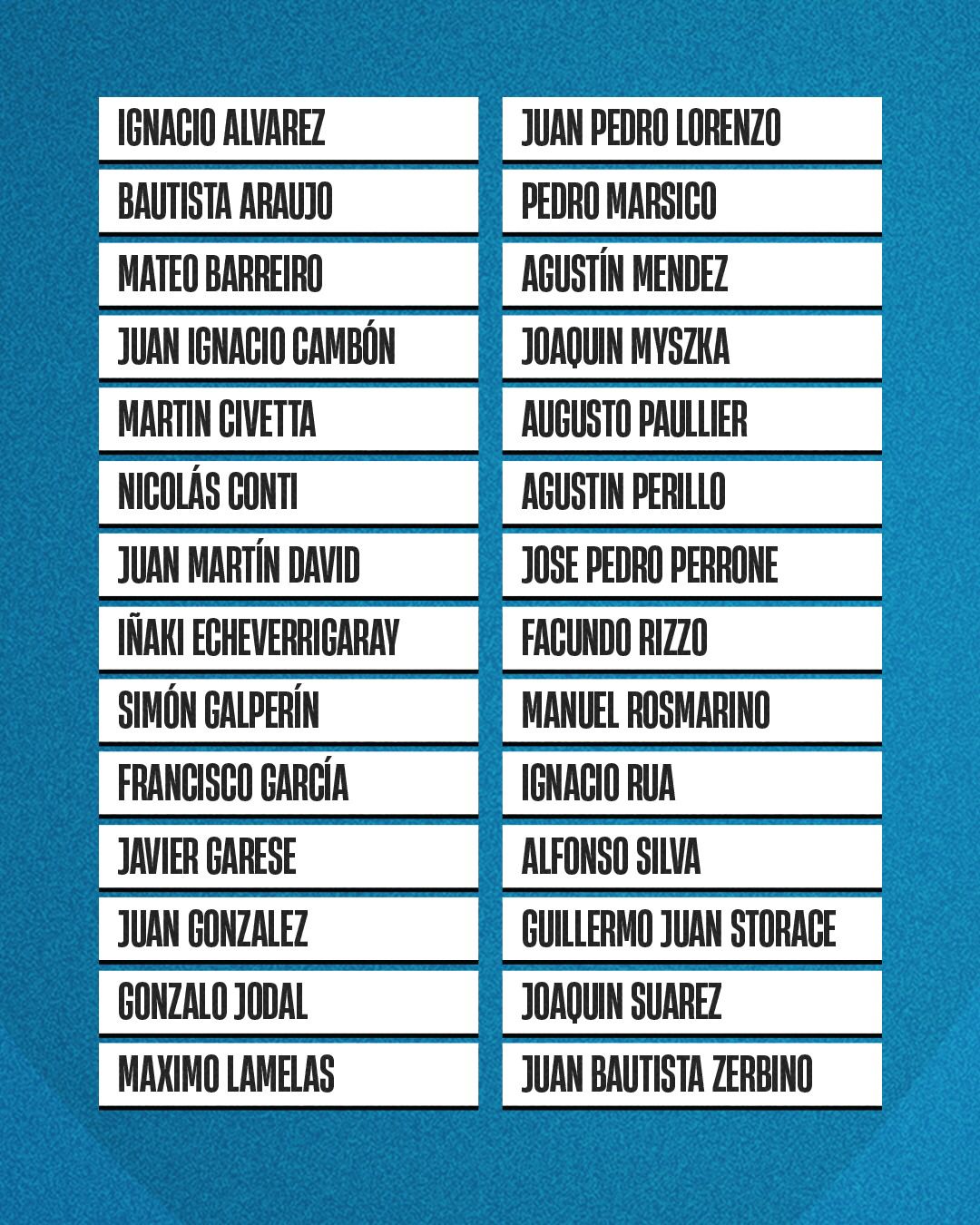 Chile have rapidly improved their men's XVs program and have qualified for the World Cup. They look very organized at the U20 level and announced their 28 player squad through their website on July 28th.
CANADA

Rugby Canada haven't announced their squad yet. It will likely be announced through their website and social media channels. The U20 team maintains an Instagram account.