[ed. update Japan SDS (Sevens Development Squad) won the girls title defeating the NZ and Australian U18 teams, a big upset. On the boys side it was the expected result, NZ U18 team winning.]

The BC girls U18 team started off the day with a win in the Bowl quarter-finals, a close 10-7 win over the Central Coast Seahawks. That put them in the Bowl semi-final against Rugby Vault, a NZ team, coached by David Mays. David has coached in BC at the club and regional level. He coached the Vancouver Island Crimson Tide women's team when they won the Ruth Hellerud-Brown trophy in 2006. He's also written some in depth coaching articles for BCRN, like this one on the professional 7s game in 2014. He now lives and coaches in NZ. It was a close match with Rugby Vault coming out 17-12 winners. That wrapped up the tournament for the girls U18 team, they finish in an 11th/12th tie with the NZ Barbarians. Rugby Vault will face the NZ Fijians in the Bowl final for 9th/10th place.

The surprise team of the girls tournament are the Japan SDS team, they upset the NZ U18 team in the Cup quarter-finals, 26-12. At the time of writing there are four teams chasing the Cup, Japan v NZ Cavaliers and Australia v Two Blues Sydney.

The BC boys team ended the tournament with two losses, the first one to Auckland club, Pakuranga Koru United, 35-12. The second to another NZ rugby club, Rangataua, 36-17. The boys end up in a 15th/16th tie with the Samoa Barbarians. The surprise team on the boys side are the Asian Dragons, they defeated Australia in the Cup quarter-final. At the time of writing the four teams chasing the Cup are NZ v NZ Cavaliers and Asian Dragons v Samoa. 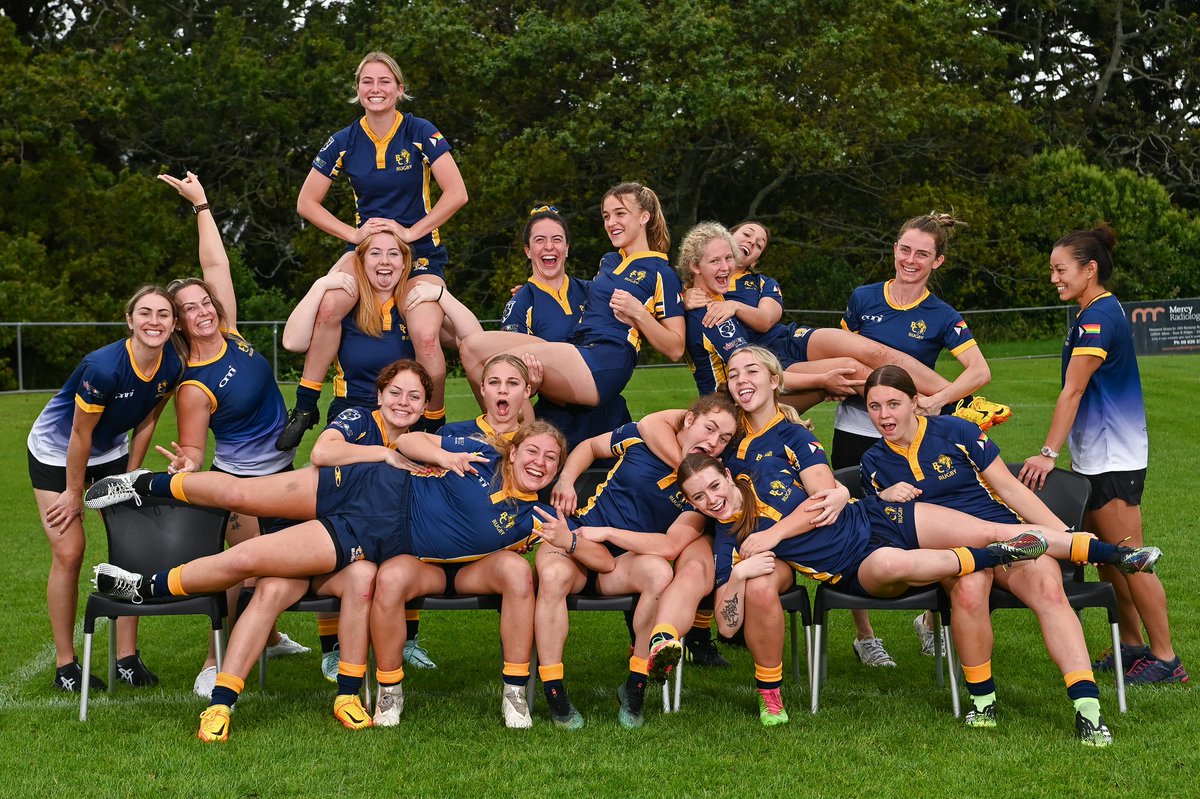 BC U18 Teams Make it to Bowl Quarter-Finals on Day 2: Scores and Video from Field 3

The girls U18 team were a bit more competitive than the boys on Day 1 but both teams ended up in the Bowl quarter-finals for Day 2.

The girls won their first match against the NZ Warriors 17-5 which was a commendable start. They next met the NZ national U18 team and were outmatched, 52-0. They finished second in their pool however and made it to the Round of 16. There they narrowly lost to the NZ Cavaliers team 17-12, it was a heartbreaking loss and a match BC should have won. They were ahead with seconds left after scoring a try, on the restart they failed to kick the ball 10 metres however and NZ tapped from centre and scored after time expired. That result puts them up against the Central Coast Seahawks, an Australian side, in the Bowl QF, kickoff at 12:42pm PT. The matchups in the Cup round are NZ v Japan, NZ Maori v NZ Warriors, Australia v Central Storm, Renegades v Two Blues Sydney.

The boys were outmatched in their matches, they lost to Samoa in their first match, 41-19. They lost their second match 27-0 to the NZ Fijians. They finished 3rd in their pool but made it through to the Round of 16 as the 2nd best 3rd place team. Unfortunately that put them up against the NZ national U18 team who won 62-0. BC go into the Bowl QF against Pakuranga Koru United, a club side from Auckland, kickoff is 1:02pm PT. The matchups in the Cup round are NZ v NZ Maori, Tongan Barbarians v NZ Cavaliers, Australia v Asian Dragons, Samoa v Niue.

The video below is Field 3 from Day 1. Unfortunately it starts immediately after the BC girls first win over NZ Warriors. Field 2 was also streamed on YouTube but only visible to NZ based viewers.

The BC U18 teams will be kicking off their games at 12:22pm PT on Friday. Both teams have a tough draw, the boys play Samoa U18 then the NZ Fijians, the girls play the NZ Warriors then the New Zealand U18 team.

The boys tournament has 21 teams in 7 pools of 3, the girls tournament has 24 teams in 8 pools of 3. The boys are in Pool C with Samoa and the NZ Fijians, the girls are in pool I with NZ Warriors and New Zealand. In the Boys tournament, the top 2 in the pool go through to the 16 team Cup round along with the 2 best 3rd place teams. In the Girls tournament it's just the top 2 in the pool that go through to the Cup round. All other teams go into the Consolation round on Day 2.

Tournament organizers say Field 2 will be on YouTube, BC have 2 games on Field 2 on Day 1. All 3 fields are streamed on Cluck TV, the cost is approximately $21 CAD for both days.

The following are graphics from the tournaments FB page which is regularly updated. 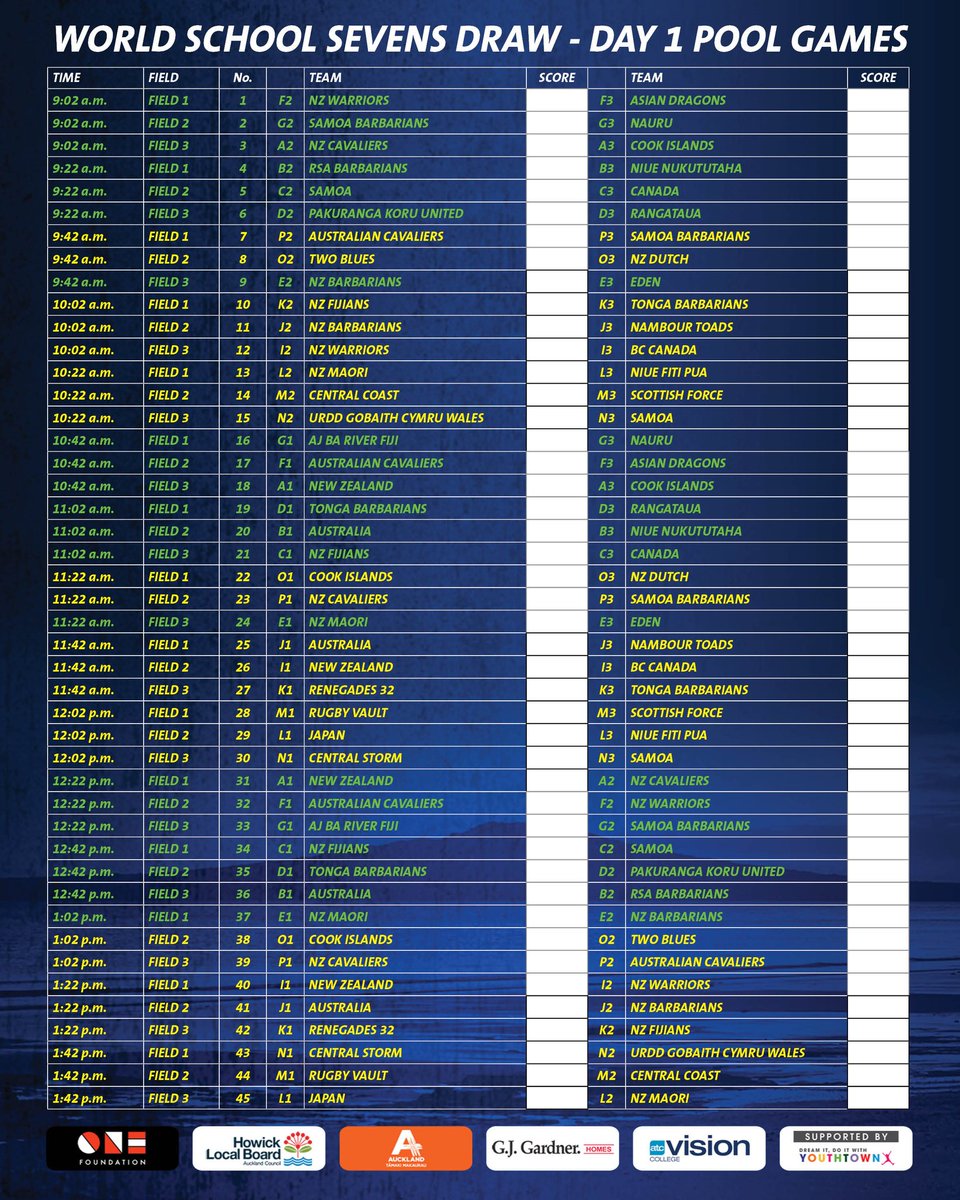 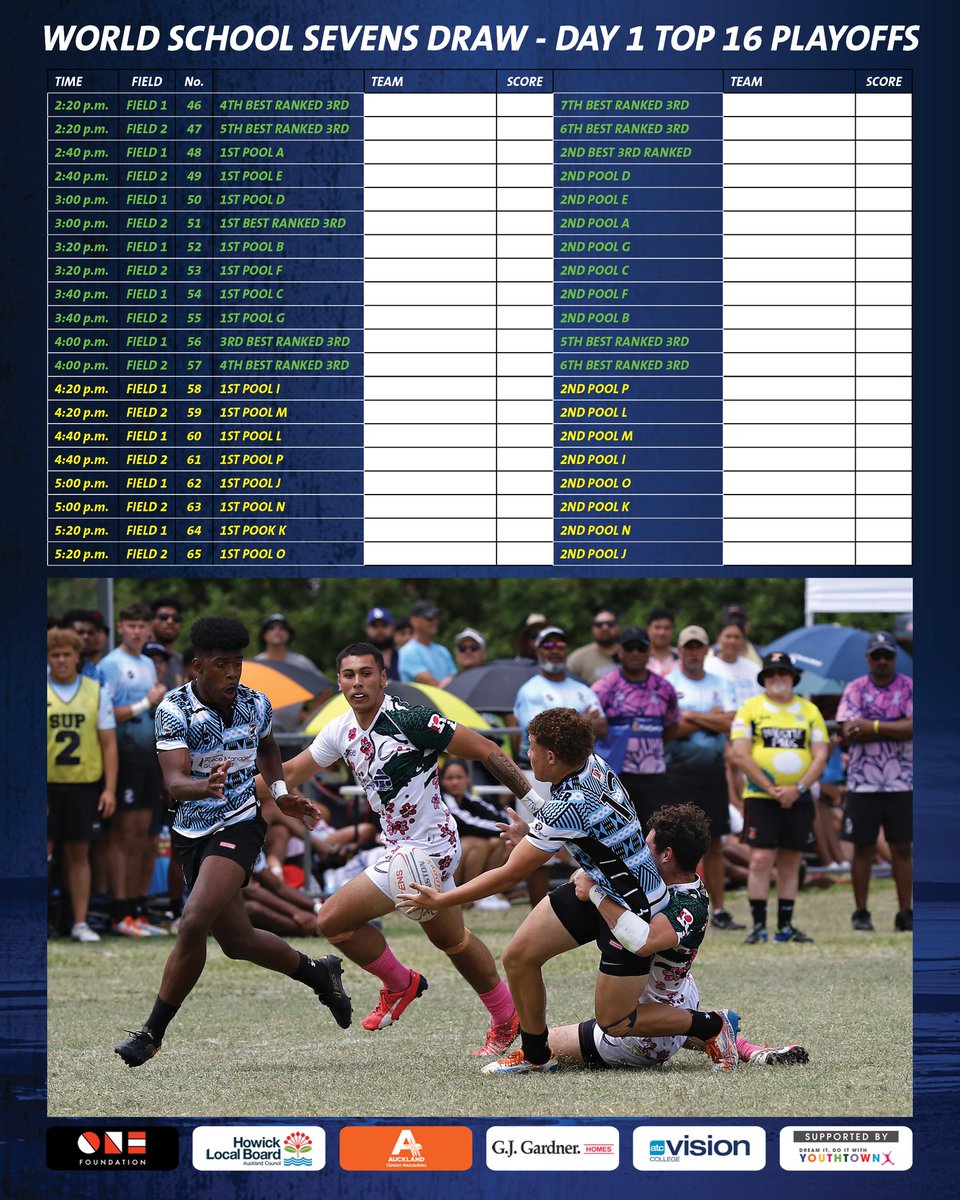 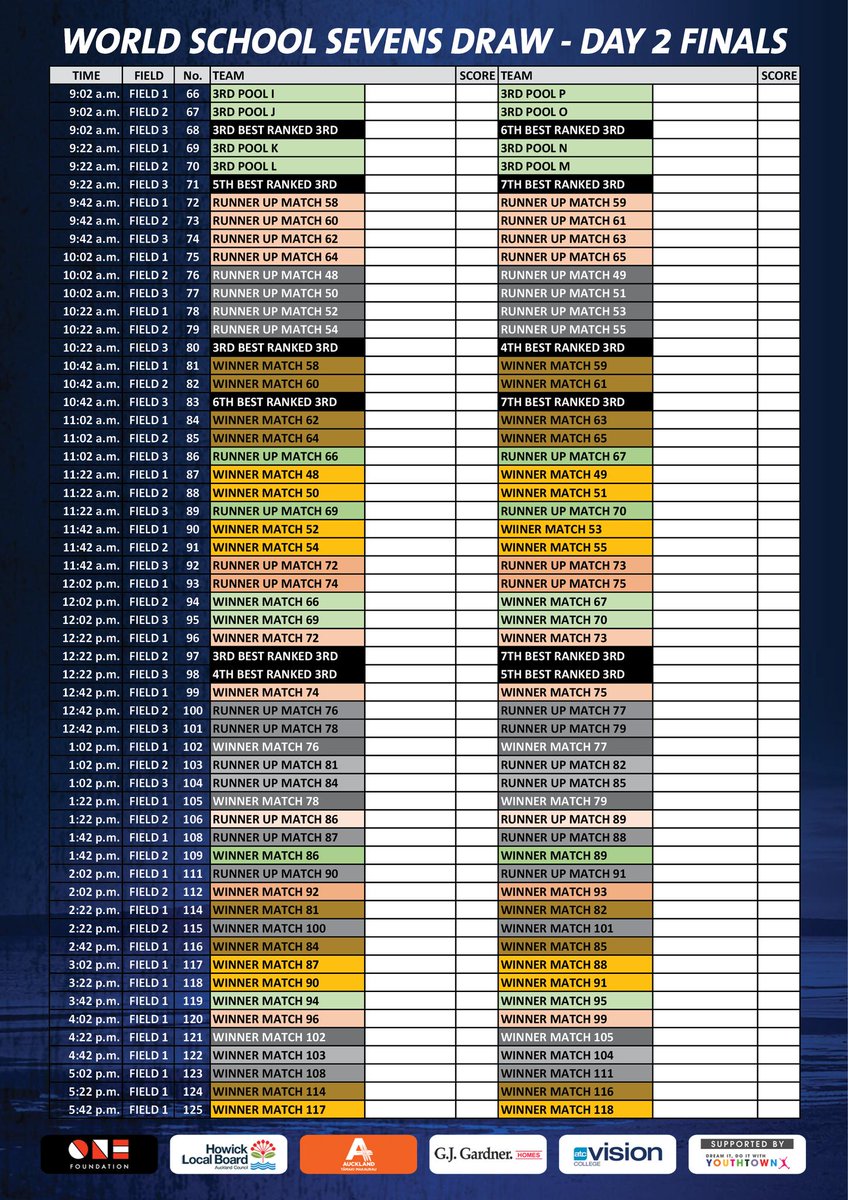 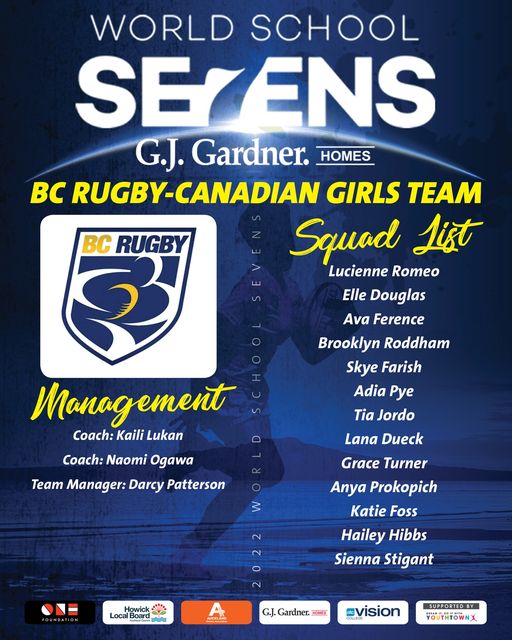 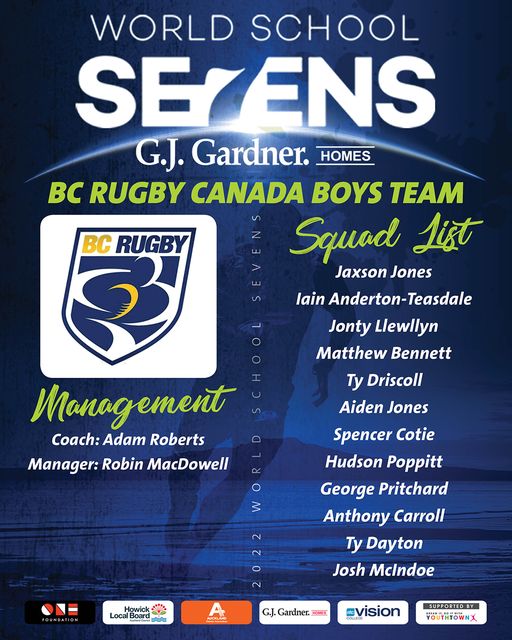 Our BC Bears U18 Elite 7s Boys and Girls Teams have landed in New Zealand and are preparing hard for the upcoming 2022 World School Sevens event in Auckland.

After arriving in Auckland last weekend, the BC Bears U18 Elite Boys and Girls sides have been training hard and acclimatising for competition on December 17-18.

The U18 Girls team has been drawn into Pool I alongside New Zealand Warriors and New Zealand, while the U18 Boys team will face Samoa and NZ Fijians in Pool C.

Both teams will play two respective Pool matches on Day 1. Dates, times, and streaming details are below.

Coaches Adam Roberts and Robin MacDowell have been putting the Boys team through its paces so far, with structured sessions that mimic the team’s playing schedule this weekend.

According to Coach Roberts, this team is really starting to gel and have fully adopted the “always getting amongst it” attitude. The Boys will watch the Auckland Blues training on Thursday morning, before scrimmaging with the Cook Islands with a cultural welcome to follow!

The BC Bears Elite Girls 7s Team has been hard at work and are getting plenty of training in ahead of the weekend.

Coaches Darcy Patterson and Kaili Lukan have been running excellent drills as the Girls continue to get used to their surroundings.

With intensity growing each day, the Girls have also been relaxing in their downtime as Day 1 of competition approaches.

The Girls had a practice scrimmage with Australia earlier this week – a fantastic experience of all involved!

The World School 7s will be streamed exclusively on Sky Sports in New Zealand and Clutch TV in the United States. We are awaiting confirmation as to whether this event will be available to stream in Canada.

Matches on Field 2 will also be streamed on YouTube – check out @worldschool7s on Instagram and TikTok for more information.

Matches take place on December 17-18 in Auckland, with times converted to PST below. Local time in Auckland is 21 hours ahead of PST.